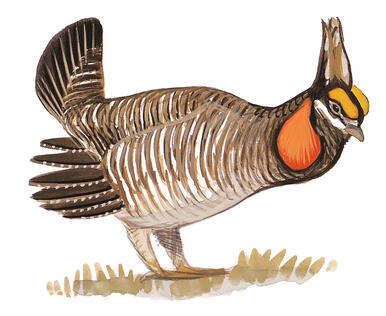 The staggering scale of this year’s western wildfire season has driven home in dramatic fashion the consequences of misguided policies informed by a zero-tolerance attitude toward fire. More than a century of fire suppression, combined with drought driven by climate change, has created forests chock-full of volatile fuels and primed for megafires. The result, this summer and fall, has been an onslaught of record-breaking blazes that have devastated communities from California to Colorado.

Though it hasn’t made as many headlines, another outcome of our fire-avoidance mentality is devastating ecosystems farther east: Trees are marching across the Great Plains, proliferating in the absence of the frequent fires that once kept them at bay. Despite their many benefits in different settings, eastern redcedar, mesquite, and other woody invaders of the prairie are sucking up precious water, reducing forage for wildlife and livestock, and degrading habitat for fast-declining grassland birds.

“We’re witnessing the death of a biome,” says Dirac Twidwell, rangeland ecologist at the University of Nebraska-Lincoln and a science advisor for Working Lands For Wildlife in the Great Plains, a conservation effort led by the U.S. Department of Agriculture’s Natural Resources Conservation Service. “It’s actually pretty simple: When there’s fire, grass wins. Without fire, trees win.”

Fire stops the spread of woody species by burning saplings before they can mature enough to disperse seeds. If knee-high saplings become bigger trees, they steal the lion’s share of sunlight and water, crowding out perennial prairie plants. At that point, grasslands can quickly become forests.

Before European settlement, Great Plains grasslands burned regularly; a given swath of tallgrass prairie in the eastern plains would have burned at least every three years. In addition to ignition from lightning strikes, Indigenous communities regularly set fire to the prairie. Tribes recognized the importance of regular burning—the original version of what we now call prescribed fires—to recharge soil with nutrients and foster healthy, diverse perennial plants that, in turn, better supported the wildlife that fed native people. These periodic fires helped to renew grasslands and keep trees and shrubs from gaining ground.

“Fire is as important as rain in this ecosystem,” says Ed Hubbs, habitat and private lands manager for Spring Creek Prairie Audubon Center in Nebraska. “Wildlife flock to eat the new-grown grass that comes up after a fire because it’s more nutritious—just like you always choose the freshest lettuce at a salad bar.”

Many pioneers who ventured west, however, perceived fire as a threat without understanding its importance in balancing an ecosystem. As their homes, farms, and towns spread across the prairie, settlers promptly put out natural fires to protect their crops and structures. Homesteaders also began planting millions of trees as windbreaks. Meanwhile, the government forced tribes from the grasslands they’d long used fire to maintain. This trifecta encouraged woody species to grow outside of their normal range.

The resulting habitat degradation has been particularly hard on grassland birds.

The resulting habitat degradation has been particularly hard on grassland birds. Populations of these species have declined by 53 percent since 1970, and Audubon’s recent climate report, Survival by Degrees, shows that 62 percent of remaining grassland species are vulnerable to extinction if the planet warms by 3 degrees Celsius. Factor in invading trees and the outlook is grim for the avian inhabitants of this midcontinent biome.

“Grassland birds are very intolerant of trees,” Hubbs says. “They leave once woody species arrive.” Take Lesser Prairie-Chickens, for instance. These imperiled upland grouse avoid nesting in places where there’s more than one tree per acre, since branches provide perches for hungry raptors. They stop using grasslands altogether when there are more than three trees per acre.

Encroaching trees are certainly not the only reason the country’s grasslands are in trouble. Most of the loss is a result of plowing the prairie under to make way for houses, roads, and farmland. Research shows that farmers tilled up nearly 9 million acres of grasslands from 2008 to 2016 to plant crops like corn and soybeans.

But the amount of prairie consumed by trees is increasingly worrisome, experts say. In a study released this summer, University of Montana researcher Matthew Jones used new mapping technology called the Rangeland Analysis Platform to confirm what he calls a “massive expansion” of trees across the American West. Tree cover has increased across 44 million acres in the Great Plains just since 1999, according to Jones’ analysis. “If we don’t get ahead of the curve, those acres could look more like forests in the coming decades,” he says.

The good news is that this same open-access mapping software is also helping landowners and resource managers target areas where reintroducing fire can save existing grasslands. Twidwell, for instance, is using the platform to help partners prioritize where to invest federal conservation funds on practices like prescribed burns or cutting redcedar. More than 90 percent of the Great Plains is privately owned, Twidwell says, so these working-lands conservation efforts are essential for the prairie’s future.

“In places where there’s a culture of landowners embracing regular prescribed fire, we still have intact grasslands,” Twidwell says. “That’s where we have hope.”

In Nebraska, Hubbs is helping to spread that hope in his role as president of the Tri-County Prescribed Burn Association, one of 11 such nonprofit partnerships in the state. Comprising volunteer private landowners, members share equipment, time, and knowledge to help each other safely burn the tallgrass prairie. Hubbs says he sees promise in how quickly PBAs are catching on: Since 1995 more than 60 landowner-led burn groups have taken root in local communities across the Great Plains.

These groups are not only helping to stem the tide of trees, they’re also helping shift the cultural narrative around fire. More landowners are coming to understand the benefits of fire for maintaining healthy forests, foothills, and grasslands. And they’re recognizing that carefully managed burns today are the best insurance against catastrophic megafires in the future.