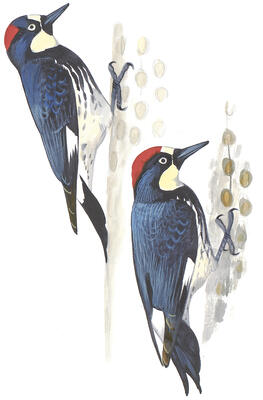 (WASHINGTON) “Our nation’s birds, parks, and lands would be in good hands with Rep. Deb Haaland leading the Department of the Interior,” said David Yarnold, president and CEO, National Audubon Society. “Rep. Haaland is a fierce advocate for wildlife and our public lands in the House of Representatives and her nomination as the first Native American secretary marks an important reckoning for an agency that has historically failed that community.”

Rep. Deb Haaland currently serves New Mexico’s first congressional district and is vice chair of the Natural Resources Committee and chair of the Subcommittee on National Parks, Forests and Public Lands. She was one of the first Native American women elected to the U.S. Congress.

"President-Elect Biden selected an incredible leader for the Department of the Interior in Rep. Deb Haaland," said Jon Hayes, Audubon Southwest Executive Director. "As a fellow New Mexican, she is an advocate for public lands, our critical waterways—including the Rio Grande, Colorado, and Gila Rivers—and all of the people and birds that depend on them. As a member of Laguna Pueblo, Rep. Haaland is uniquely able to represent indigenous people and ensure their voice is heard by the United States government. We're looking forward to working with her on water conservation, climate change, and other important issues we face in the Southwest."

The next Secretary of the Interior will be facing an increasing biodiversity crisis and climate threat to its important and varied mission, a threat that the Department’s portfolio of public lands and waters contribute to, as they currently contribute more than 20 percent of the United States’ carbon emissions. Our changing climate exacerbates persistent threats to birds such as habitat fragmentation, loss, and degradation. New science tells us we have lost 3 billion birds since 1970 and that two-thirds of North American bird species face the threat of extinction if we do nothing to address climate change.

“Our public lands and waters are in urgent need of new vision and investment to help communities and natural spaces build resilience in the face of a changing world,” said Yarnold. “We stand ready to help the next Secretary accomplish the promise and potential of this moment by making our public lands and waters part of the solution rather than adding to the challenges of the climate crisis. We urge the Senate to quickly confirm Rep. Haaland for Secretary of the Interior so that our grandchildren can experience a healthy environment and the sublime joys of the natural world.”