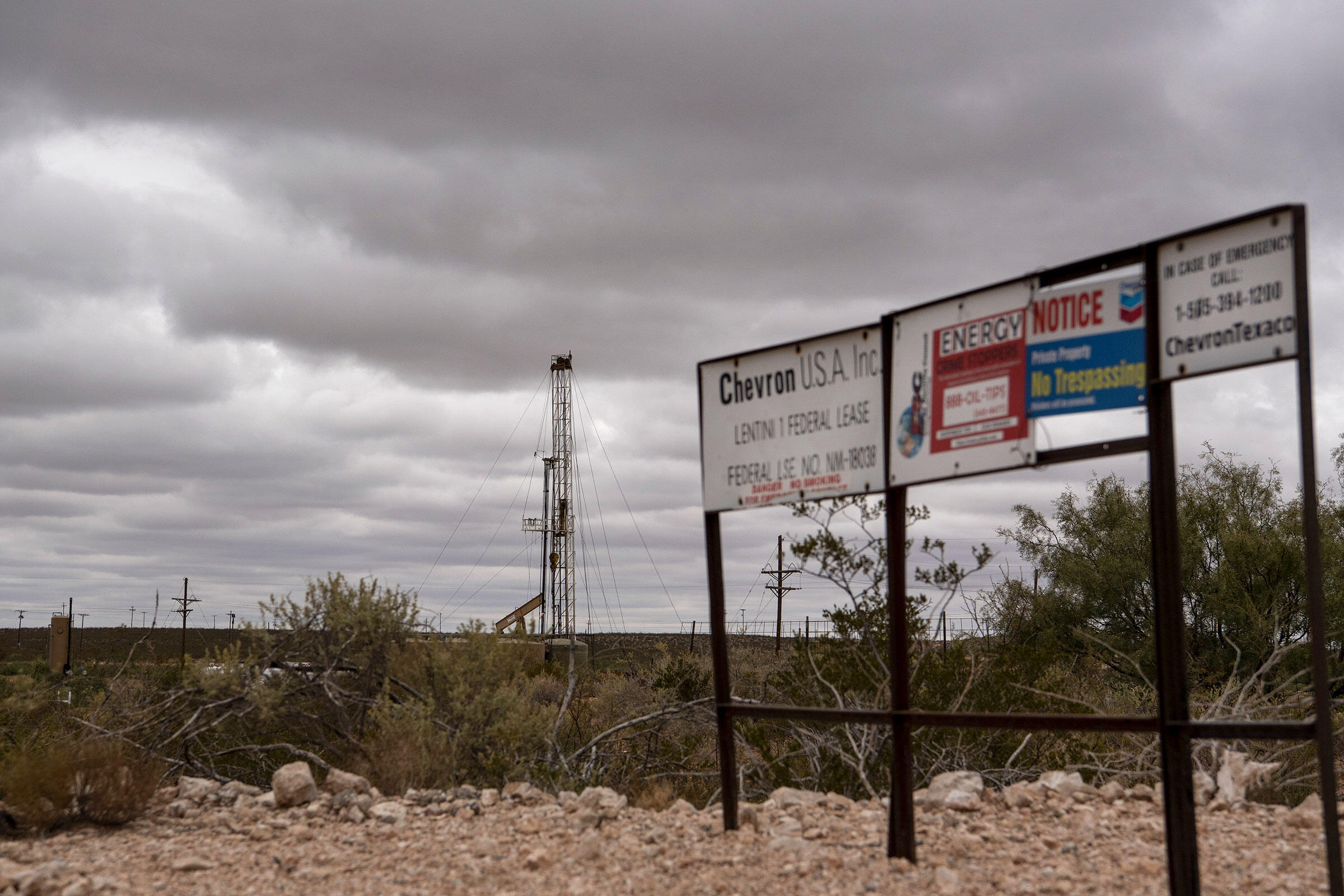 Despite a Pledge to Ban It, Oil and Gas Permitting Is Up Under Biden

Legal and political realities seem to have tempered the administration’s ambitions for ending fossil fuel extraction on federal lands.

On the campaign trail, President Joe Biden made a bold promise to ban oil and gas permitting on federally owned land. Then, just days after taking office, he laid down a federal leasing moratorium, part of a set of sweeping executive orders on climate change.

The pause would give the administration time “to review and reset the oil and gas leasing program,” Biden said at the time. How that program is run has big stakes for the climate; the U.S. Geological Survey estimates that roughly a quarter of all U.S. carbon emissions come from federal oil, gas, and coal extraction. As this week’s report from the Intergovernmental Panel on Climate Change makes clear, burning those fossil fuels has caused dangerous global warming, and the window to avoid catastrophic consequences is closing fast.

And yet, the White House is on pace to hand out more oil and gas drilling permits this year than any under President Trump and the most since George W. Bush left the Oval Office. The boom, first reported by the Associated Press, undercuts the president’s climate agenda and infuriates environmentalists demanding more aggressive action. It also exposes what activists say are fundamental legal and bureaucratic problems in the federal fossil fuel program that predate Biden by decades.

To extract oil and gas from public land, a driller must first obtain a lease. Under federal law, the Interior Department’s Bureau of Land Management (BLM) auctions off tracts, usually areas recommended by interested companies, and the highest bidder is awarded a 10-year lease. The January 27 moratorium temporarily stopped lease sales, but it did nothing about oil and gas development on more than 38 million acres of public lands and waters already stockpiled in existing leases—legal contracts that typically prove all but impossible to break.

Once a company owns a lease, it can file what is called an application for permits to drill. If the BLM determines that the proposed drilling complies with all environmental laws and regulations, the agency approves the application and issues a two-year drilling permit. Applications started pouring in last year as the world emerged from pandemic lockdown and energy demand soared. Biden’s election only ramped up that mad rush to lock in drilling rights as companies contemplated how far-reaching Biden’s clamp-down on oil and gas would be.

Because the moratorium Biden imposed a week after inauguration only halted new lease sales, drilling permit applications on already leased land have continued to roll in, spurred by still-climbing energy prices. Meanwhile, the BLM keeps approving them despite the White House changeover and rhetoric. As of August 1, more than 2,400 drilling permits have been issued since Biden took office on January 20.

Environmentalists say the White House could make it harder for drillers to acquire permits. For example, critics have long made the case that agency officials systematically underestimate environmental impacts when assessing applications, especially from fossil fuel emissions. On the campaign trail, Biden promised to “require any federal permitting decision to consider the effects of greenhouse gas emissions and climate change.”

But so far, the administration seems to be “making the political calculation that they are trying to win over the industry,” says Jeremy Nichols, climate and energy program director for WildEarth Guardians. “But then they just keep getting beat over the head by these companies and their trade associations.”

When the White House announced the leasing moratorium, it said the pause would not hurt energy companies, pointing out that 60 percent of all leased federal property sits unused. The industry and states whose economies rely on it sued anyway, arguing that federal law says the BLM “shall” hold quarterly lease sales. Biden administration lawyers thought the law left the agency some leeway, but in June, a Louisiana federal judge disagreed and ordered an end to the moratorium. Lease sales have not yet resumed, however.

Setting a higher bar for permitting will require penetrating a decentralized bureaucracy far removed—geographically and politically—from Washington. While pockets of the West see the BLM as a single cudgel to impose federal will, the bureau is spread across 12 state offices that, historically, have taken varying lines on the agency’s mission to balance resource development and conservation. Even farther flung are the dozens of BLM field offices where most leasing and permitting work actually takes place. Oil and gas companies complain that they move too slowly while environmentalists say they ignore impacts on the land, climate, and wildlife. Either way, it’s the job of these field staff to keep processing permit applications, and it has been business as usual for decades, irrespective of who occupies the Oval Office and ever-changing guidance from BLM headquarters.

Critics hope stricter permit requirements and other reforms will stem from the administration’s ongoing review of the leasing program, expected to be completed this summer. Environmentalists, like Biden’s choice for BLM chief Tracy Stone-Manning, who will soon face a confirmation vote in the Senate, spent decades decrying a “lopsided oil and gas leasing system” that shortchanged taxpayers and then stuck them with the clean-up bill for what the U.S. Environmental Protection Agency estimates are 3.1 million abandoned oil and gas wells nationwide. While some activists argue that only a permanent leasing ban is enough to confront the climate crisis, legal experts say that would likely require an act of Congress. More practicable reform ideas include raising minimum lease bids and increasing the royalty rates drillers pay to the government.

In the meantime, the administration can clamp down on drilling by getting more “creative,” says University of Colorado law professor Mark Squillace, an advisor to Clinton-era Interior Secretary Bruce Babbitt. Lease sales might be legally mandated, Squillace says, but the BLM can offer up smaller parcels on land where drilling already exists. Agencies can also update guidance for enforcing laws like the Migratory Bird Treaty Act to protect wildlife from toxic oil and gas wastewater pits.

The fossil fuel industry claims to pay more than its fair share. Federal oil and gas bonuses, rents, and royalties have generated nearly $5 billion already this year, half of which is set aside for state governments by law, according to Interior’s Office of Natural Resources Revenue. While the vast majority of American oil and gas comes from private land, companies argue an outright ban would devastate certain states reliant on fossil fuel revenues. New Mexico, which produces more oil than any state but Texas and does so mostly on federal land, took in more than $1 billion last year.

“Unfortunately, oil and natural gas development in most of the West is virtually impossible without touching some federal land and minerals, no matter how hard a company tries,” Western Energy Alliance President Kathleen Sgamma said in a press release just after Biden took office. “A ban on leasing and permitting is a death sentence.”

The Biden administration may not share that view, but at a June congressional hearing, Interior Secretary Deb Haaland—a former New Mexico congresswoman—said there is currently no plan for a permanent leasing ban. “Gas and oil production will continue well into the future,” she said, “and we believe that is the reality of our economy and the world we’re living in.”