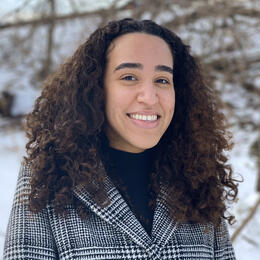 One of the biggest challenges to getting Lights Out programs adopted into official city ordinances is a lack of data on light pollution and its effects. For a group of students at University of North Carolina (UNC) Asheville, that challenge was an opportunity.

The tale starts with Paulina Jones, a senior at UNC Asheville, member of Blue Ridge Audubon, and the vice president and treasurer of UNC Asheville’s Audubon campus chapter. One day, Jones gave a presentation about Lights Out to her ethics class. She specifically focused on Blue Ridge Audubon's work on the initiative, and the collaboration between Blue Ridge Audubon and the UNC Asheville campus chapter to create the Bird-Safe Asheville Coalition, which recently convinced Asheville's mayor to sign a Lights Out proclamation. That presentation sparked an idea in the mind of a fellow student, Katrina Schubert: create a low-cost tool to accurately measure light pollution. That way, Bird-Safe Asheville could get the data it needs to help turn that proclamation into an enforceable city ordinance.

“We spent our first month of academic work here going through a number of ideas, none of which resonated,” says Katrina Schubert, original project lead and mechatronics engineering student at UNC Asheville. “Paulina talked to our class about these Lights Out ordinances and I thought ‘you know what would be useful, a tool that could help measure light pollution on a local scale.’ And our team thought it was a workable idea.”

Their team is made up of six mechatronic engineering students that assembled in August 2021 for their senior design project. The project was to create a CubeSat, a miniature cube satellite, to take pictures measuring light pollution. Their design included a gimbal that rotates along three axes, a camera with adjustable shutter speed, weather sensors, Raspberry Pi chipsets, insulation against inclement weather, and a parachute. All of this had to be precisely stabilized because it would be tethered on to a helium balloon. And it had to be simple enough to be accessible for anyone to use.

“Creating this tool that captures much more localized data is what we're shooting for and one that is low cost,” says Schubert. “When you're looking at light pollution data that is available, most of it is taken from space, and so you have a high-level view of what's going on. The goal here was to bring that high or macro level view down to the micro view and be able to target certain regions to get that data to the people that need it to create legislation. Which is to help handle some of the problems that are currently going on.”

What on the surface level was supposed to be an ‘easy straightforward project’ soon became a challenge as they needed to fit all their technological innovation into a tiny package and be financially and technologically accessible. Some of those challenges included designing the gimbal and testing the response time of the stabilization motors. Even finding the right ISO speed for their camera proved to be fraught. And, as with everything else in 2022, supply chain issues created their own headaches. For the gimbal, the students needed a control board that was not too expensive, but of course it was backordered. Even the weather refused to cooperate and the team had to scrub some test launches for safety reasons.

“It would be much less challenging if we were trying to just take normal photographs, but since we're trying to take night shots, you have to stabilize a camera for a longer period,” says the team’s new lead, Samuel Julian. “When you talk about something floating in the air, bobbing back and forth, and you're still trying to take a very still image, it becomes an advanced engineer problem.”

One thing that was not a huge problem were their finances. Their total budget was $5,000, and by their midterm presentation, the team had $2,450 left over that they could use for ‘unexpected purchases.’ To keep prices down, the students use tools that can be printed from 3D printers and boards that can be easily purchased. Outside groups are interested in the design and want to expand this project to be used on a larger (more expensive) scale to be launched into space. But, according to Schubert, that is not what the UNC Asheville team is focused on.

At press time, the team had worked out most of their technical issues and are planning to conduct test launches in clearer skies. They have received their 3-axis controller and have it moving and functioning, but will continue to work on the cube sat platform through the rest of the semester and calibrate it before their next launch.

“We need to get the physical thing moving and working. The majority of the work we’ve done is getting this thing in the air and taking the readings,” says Schubert. “All in all, we just wanted to create a tool that would be useful for organizations like the Audubon Society to present [light pollution] data to lawmakers to create change.”