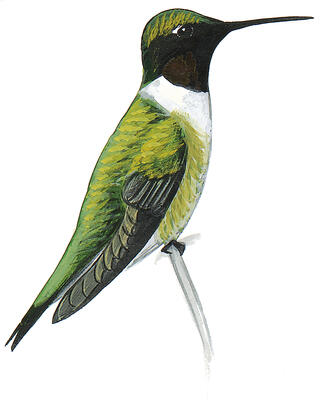 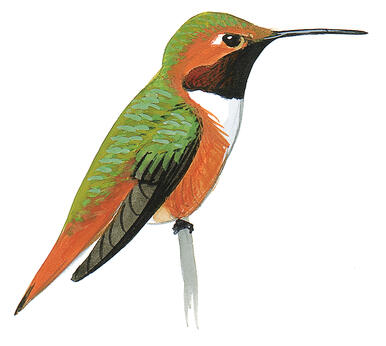 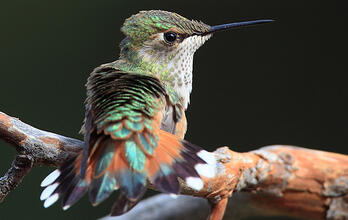 Minute, feisty, energetic, and colorful, hummingbirds fascinate birders and non-birders alike, zipping around like miniature helicopters while ferociously bullying others of their kind. Who wouldn’t want a bird like that in their yard?

It turns out, people living in tight city spaces can charm hummingbirds, too. Contrary to popular belief, you don’t need a multi-acre yard that looks like it belongs in a Martha Stewart catalogue. In fact, you don’t have to have a yard at all.

“You could easily get hummingbirds, even on the upper floor of an apartment building,” says Geoff LeBaron, Audubon’s Christmas Bird Count director, “especially if you put out a feeder during migration and have flowers on your balcony.”

If you’re putting up a feeder, make sure to fill it with undyed sugar water (four parts hot water, one part sugar). And if you’re doing a bit of gardening, try cardinal flower, trumpet creeper, or spotted jewelweed.

Planting native species and shunning pesticides are two key elements for attracting birds, according to LeBaron.

“It’s very easy to make your yard hummingbird-friendly,” he says. “And once you have them . . . they’re going to come back every year.”

It’s always important for hummingbirds to have access to nectar sources, says Kathy Dale, Audubon’s director of citizen science. “They are such high-energy birds and they need to feed very frequently.”

That’s where people come in. Just a few neighbors coming together and planting flowers can provide “great benefits” for hummingbirds, Dale explains.

“Even if you just have a small yard or a window box, we recommend that you plant natives, because you never know what’s going to pass through,” she says.

For urbanites who are pulling out all the stops—feeders, flowers, misters, perches—and still not seeing results: don’t despair . . . the hummingbirds may be passing through when you’re not looking. Even if they aren’t, the spiffed-up habitat is “better for any other wildlife that stumbles in,” says LeBaron. Insects, for example, are much more common on natives than on exotic ornamental shrubs. With insects come insect-eating birds, like flycatchers and orioles.

Eastern United States: If you live in the eastern half of the country, you will probably only host one hummingbird species: the Ruby-throated Hummingbird. It rarely breeds in highly urban areas (although one pair did set up shop in New York City’s Central Park this past summer). But during migration, as they fly back-and-forth from their wintering grounds in Central America and lose almost half of their body weight, the bitsy birds will drop into green urban areas. These spaces, no matter how sparse and limited, can be their lifelines.

Western United States: There are several hummingbird species out West—some of which are city-slick. For example, LeBaron says that Anna's and Allen’s Hummingbirds are abundant in San Francisco. Meanwhile, Southern California has three types that are a constant presence in people’s yards—Anna's, Allen's, and Costa's. Southern Arizona has even more hummingbird diversity, with up to 14 species visiting yearly.

No matter where you are in the country, you can report your backyard hummingbird sightings on the Audubon Hummingbirds at Home page. Your input can help scientists understand how climate change, flowering patterns, and feeder positions are impacting North American hummingbirds.