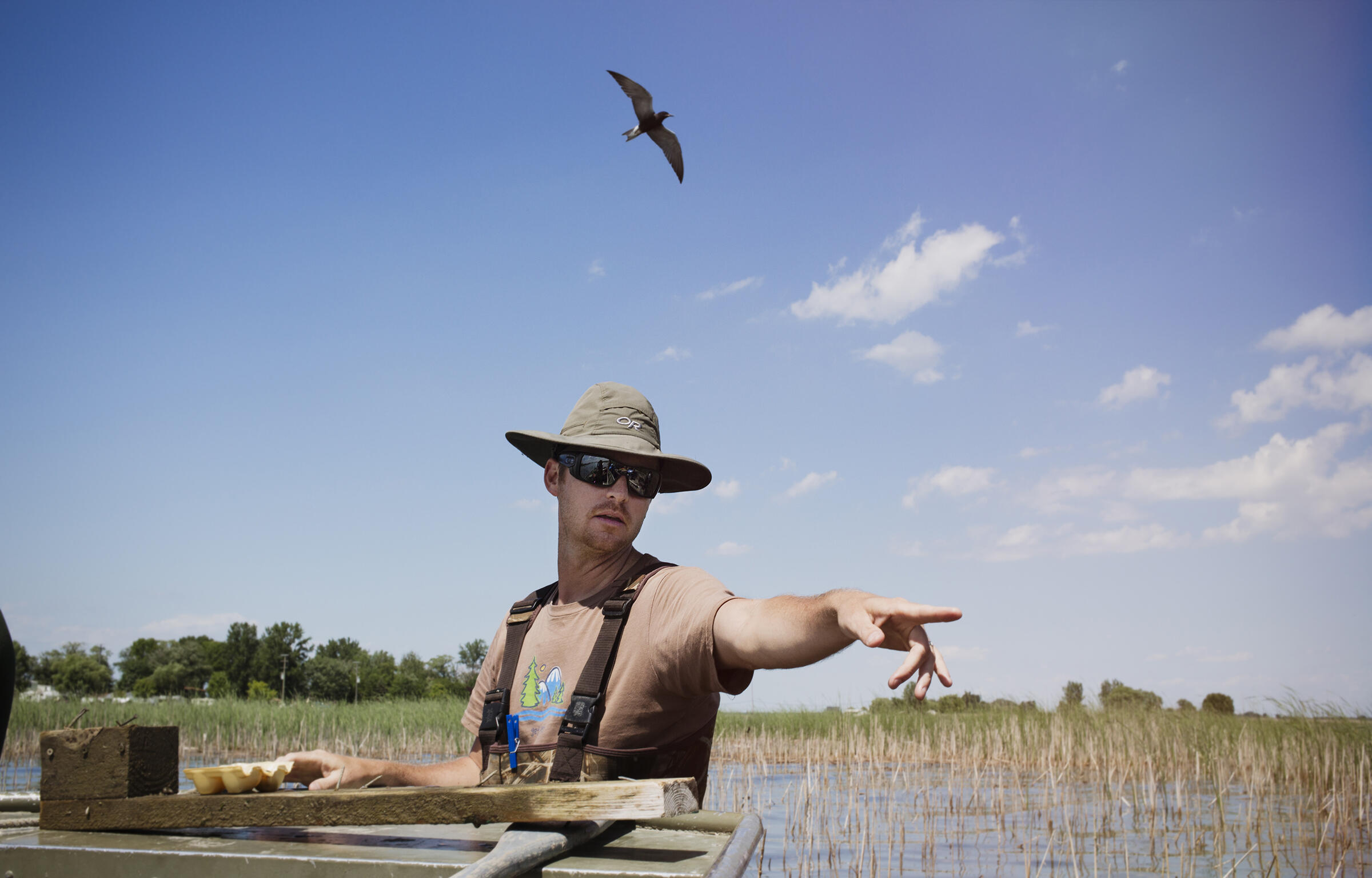 In Michigan, a Grassroots Effort to Save the Vanishing Black Tern

To rescue the graceful marsh bird, researchers first have to solve the mystery of its dramatic decline.

When we approach Mackie Colony, one of six Black Tern colonies in the St. Clair Flats Wildlife Area, where the St. Clair River meets Lake St. Clair 20-odd miles from downtown Detroit, the June blue sky comes alive with the cries of a dozen terns circling overhead. Caleb Putnam, Michigan Important Bird Areas program coordinator for Audubon Great Lakes, and Dave Shealer, a biologist from Loras College in Iowa, are the first ones to hit the water.

I watch as Putnam and Shealer wade through a mixed habitat of cattail and bulrush marsh to reach several Black Tern nests. These nests are, as Shealer puts it, “cobbled together” right on top of the water, built on broken bulrush stalks that have matted up to form makeshift rafts. When the two return to the boat, Shealer holds a pair of chicks and Putnam cradles a clutch of  three eggs. Volunteers from Detroit Audubon—Randy Kling and Erin Rowan—band the birds and record the data. They hope that, combined with data from the past three field seasons, it will point to the reason for the terns’ mysterious decline.

Black Terns spend four months breeding in scattered colonies across the northern United States and Canada, including around the Great Lakes. Then they fly south to the coastal areas of Central and South America. At some point, the terns aren’t able to survive. Since the 1960s, the population worldwide has dropped by 70 percent. “The bird is going downhill fast,” Putnam says. “The population should be stable but it’s not.”

The Audubon team—together with partners at the Michigan Department of Natural Resources and Detroit Zoo—has been trying to rule out threats to the terns’ survival. “It’s a process of elimination,” Putnam says. “What are the attributes out of whack here? It’s either that the adults aren’t living out their lives or that they’re not making enough babies.”

Nest failures, habitat loss, the proliferation of invasive species such as phragmites—a common reed that is everywhere you look here—all place pressure on the tern’s breeding population. But so far at St. Clair Flats, breeding success doesn’t appear to be a problem; the team has consistently found plenty of chicks. Shealer’s own work in Wisconsin indicates the adults may not be surviving between breeding seasons. By banding birds for recapture, Putnam and crew hope to glean whether that’s the case in Michigan, too.

Satellite transmitters capable of tracking individuals as they migrate south would help fill important gaps, such as adult mortality rates, winter movements, and colony fidelity. Currently such devices aren’t light enough for Black Terns, which weigh little more than a Wiffle ball. So in the meantime, the team hopes to scale its banding work from a small, grassroots effort to a larger project covering other sites in the Great Lakes.

After banding the chicks, Putnam and his team attempt to capture an adult tern. Rowan trips the remote trap as Putnam, gazing through binoculars, signals a thumbs-up that the bird has settled on its nest. “Got it!” he exclaims, busting waist-deep through the lily-padded waters. The tern had been banded a previous year—a good sign. This one, at least, made it home. 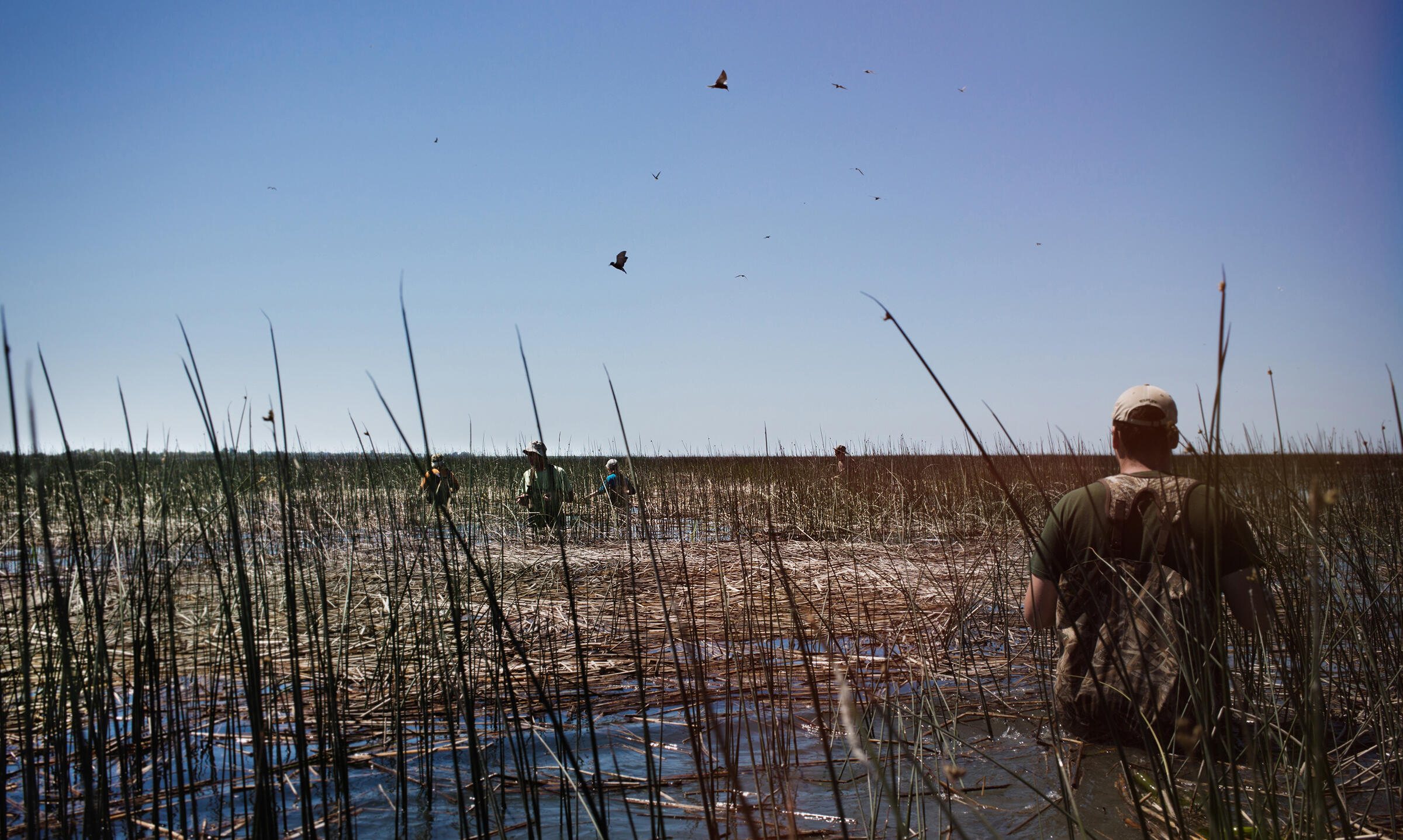