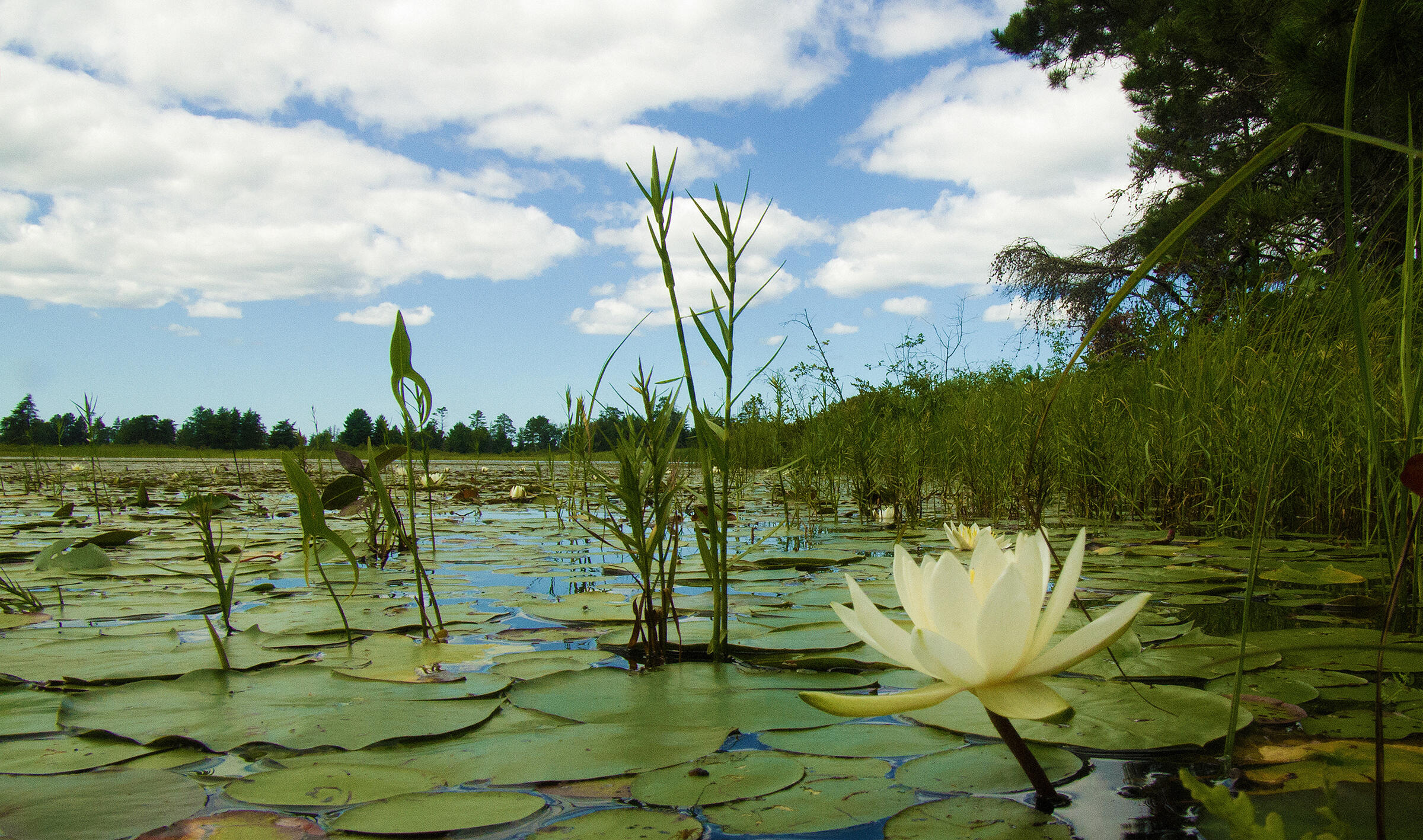 Michigan is no slouch in terms of size: It’s the second-largest eastern state by land area and it has more than 3,000 miles of coastline along the Great Lakes. Michigan is also the tenth most populous of all the states, but happily for birds the dense urban centers are all concentrated in the far south.

That leaves a lot of land for avian habitat, especially in the sparsely populated Upper Peninsula, where Seney National Wildlife Refuge hosts flocks of Trumpeter Swans. Slightly more than half of Michigan is forested, whether with bottomland hardwoods or northern conifers. The woodlands of the Lower Peninsula are most famous for the Kirtland’s Warbler, one of the rarest species in North America. Special tours are offered each summer to see these birds in their pine-forest habitat.

Many of Michigan’s most productive birding sites are located along the Great Lakes coastline, and some are within the Detroit metropolitan area. These locations allow viewing of waterbirds such as waterfowl and gulls, but also concentrate migrant birds in the spring and fall. Migration at Tawas Point ranks with the state’s birding highlights. The state’s ad hoc system of trails can point you to others

Whitefish Point is a triangle of land projecting into Lake Superior on the northern shore of Michigan’s Upper Peninsula, 35 miles northwest of Sault Ste. Marie. This famed spot tops out at more than 340 species, the greatest number of any site in the state. It’s home to the Whitefish Point Bird Observatory, which has been documenting migration since 1979.

The observatory conducts counts of migrating geese, ducks, loons, grebes, shorebirds, and other waterbirds, as well as an important count of migrating raptors. Visitors are welcome at the site, which celebrates an annual Spring Fling festival with field trips, lectures, and workshops around the beginning of May.

During migration, visitors may see great numbers of ducks, Red-throated Loons, Common Loons, hawks, Sandhill Cranes, Whimbrels, Bonaparte’s Gulls, and of course thrushes, warblers, and other songbirds. It’s impossible to cover even the highlights, other than to say that anything’s possible. For example, a Mississippi Kite, Lewis’s Woodpecker, and Scissor-tailed Flycatcher have all strayed off course and shown up here.

This game area, about 20 miles south of Detroit, ranks with Michigan’s most productive and exciting birding sites. With 4,000 acres of restored wetlands, it hosts waterfowl, wading birds, shorebirds, and marsh birds in great numbers and variety.

The birding technique at Pointe Mouillee is simple. At any time other than the closed hunting season in fall, park at one of the three access points on the west side and walk some of the miles of flat, unpaved roads on the levees that separate the impoundments. A spotting scope is handy to scan the marshes, open water, and mudflats. There’s no shade, so sun protection and drinking water are vital.

In impoundments where the water level is right, shorebirds are common in spring and fall, with an occasional rarity such as Ruff or Curlew Sandpiper. Bald Eagles are seen year-round.

Walks of many miles are possible here without covering the same route, although visitors can also walk out any distance they like and return. It’s best to get a map from the area website before a trip to Pointe Mouillee.

Located in the heart of Michigan’s Upper Peninsula, this 95,000-acre refuge rewards a visit with a wonderful mix of northern habitats, including bog, marsh, and forest, along with a diversity of nesting boreal birds.

Because of the region’s harsh winters, the refuge visitor center off Highway 77 is open only from May 15 to October 15. A seven-mile, one-way wildlife drive (also closed in winter) begins at the visitor center and clearly reflects that wetlands compose around two-thirds of the refuge. The drive passes three observation decks along its route. In addition, the refuge has trails and many miles of roads to explore on foot.

Sought-after species such as Spruce Grouse, Yellow Rail, and Northern Saw-whet Owl are present at Seney as well—but, as usual, count yourself lucky if you see one of these secretive birds.

Just south of Saginaw, Shiawassee has gained prominence as one of Michigan’s finest birding sites. As an example of its possibilities for visitors, around 280 species have been recorded on its 6.5-mile auto tour route alone.

With 9,800 acres of habitats comprising bottomland hardwood forest, marsh, and grassland, the refuge is part of an ecosystem where four rivers meet. Shiawassee has built several impoundments that the staff use to manage water for the benefit of waterfowl, shorebirds, and other wildlife. Tens of thousands of waterfowl are present during migration, and the refuge has been designated as an Important Bird Area.

This 273-acre site near the town of Arcadia offers the chance to see marsh birds and, when the water level is right, shorebirds. Highway 22 runs through the marsh, allowing roadside scanning of the wetlands. There’s an unpaved trail into the marsh now, and a boardwalk with viewing areas is planned for the future.

This park on the Lake Michigan shore is known for its dunes, which reach as high as 240 feet above the water, and for being an extremely popular summer-getaway destination. It’s also one of two fine birding sites, along with Warren Woods State Park, located only five miles apart.

During migration birds follow the lake’s shoreline, making Warren Dunes a great destination. In April, eight or more species of raptors may pass overhead. Occasional flocks of Sandhill Crane may migrate through, as well. The peak for most migrant songbirds is May.

Kirtland’s Warbler is a small gray-and-yellow songbird that needs young jack pine forest for successful breeding. Lack of habitat and parasitism by Brown-headed Cowbird caused its population to sink to a few hundred pairs in the 1970s, making it critically endangered.

Through decades of management, the population has now increased to nearly 2,000 nesting pairs. Though the Kirtland’s Warbler nests sparingly in Wisconsin and Canada, most of its range lies in Michigan. In fact, Michigan birders have essentially adopted it as the avian symbol of their state.

Each year hundreds of people visit the area around Grayling in the northern part of the Lower Peninsula to see this bird. Of course, it’s vital not to disturb or harass an endangered species in its breeding grounds, and so from mid-May to July, guided tours leave from Mio and near Grayling to let birders catch a glimpse with minimal disturbance. Visit the Michigan Audubon website or that of the Huron-Manistee National Forest for details.

This 183-acre park lies on a narrow peninsula on Lake Huron just north of Saginaw Bay. Its location and distinctive shape make it one of the best locations in the region to see migrant birds. A good May day at Tawas Point, in fact, can truly be called a birding spectacle.

In spring and fall, birds tend to concentrate on this relatively small spit of land, funneled there by the natural contour of the shore. A walk down the Sandy Hook Nature Trail may yield small trees and shrubs virtually dripping with birds: flycatchers, vireos, thrushes, warblers, orioles, and more. Although spring is peak season, fall is productive as well.

Marsh and mudflats lie on one side of the peninsula and the sandy beach of Lake Huron on the other. This serves to attract wading birds and shorebirds as well as ducks, gulls, and terns. Piping Plovers nests here, and Caspian Terns, Black Terns, Common Terns, and Forster's Terns breed locally. Bald Eagles are also seen here nearly year round.

Tawas Point’s bird list tops out at around 280 species. Several rarities have made the list, including Say’s Phoebe, Scissor-tailed Flycatcher, and Prothonotary Warbler. Notably, the endangered Kirtland’s Warbler appears here with some regularity in May.

Located in the Detroit River, just minutes from downtown Detroit, this 985-acre park has one of the highest species totals of any birding site in Michigan. The state took over the park from the city in 2014 and renovated many of its facilities.

The surrounding river and the park’s ponds attract a range of waterfowl in winter, including the Tundra Swan and dabbling and diving ducks, such as Canvasback, Redhead, Greater Scaup, Common Goldeneye, and all three mergansers. A number of rare waterfowl have appeared over the years, including Brant and King Eider. Many rare gulls have been spotted here in winter, too.

Local birders visit Belle Isle in spring and fall for songbird migration. While migrants can show up anywhere, the eastern end of the island has more woodland, as well as cattail marsh. May and September are the best months to see migrants such as flycatchers, vireos, and thrushes. More than 30 species of warblers have been recorded, including rarities such as Worm-eating and Kentucky warblers. Bald Eagles are seen most often in February, and the locally rare Pileated Woodpecker has been seen in May.

This location on the western shore of Saginaw Bay is known for teeming flocks of waterfowl in spring and fall. Canada Geese and dabbling ducks, such as the American Wigeon, Mallard, and Northern Shoveler, are most common, but Nayanquing Point also sees numbers of Tundra Swans, Ring-necked Ducks, scaup, and mergansers, among other species.

There’s an office on Tower Beach Road that can provide advice. Following East Kitchen Road east and south leads to an observation tower with panoramic views of the marshes. Note that hunting is allowed and very popular at Nayanquing Point, so birders should check in advance for seasonal schedules.