The flight of this bird is performed by short flappings of the wings, the concave under surfaces of which occasion a low rustling, as it moves to the distance of a few steps only at each start. It is accompanied by violent jerks of the tail and body, and is by no means graceful. In this manner the Carolina Wren moves from one fence-rail to another, from log to log, up and down among the low branches of bushes piles of wood, and decayed roots of prostrate trees, or between the stalks of canes. Its tail is almost constantly erect, and before it starts to make the least flight or leap, it uses a quick motion, which brings its body almost into contact with the object on which it stands, and then springs from its legs. All this is accompanied with a strong chirr-up, uttered as if the bird were in an angry mood, and repeated at short intervals.

The quickness of the motions of this active little bird is fully equal to that of the mouse. Like the latter, it appears and is out of sight in a moment, peeps into a crevice, passes rapidly through it, and shews itself at a different place the next instant. When satiated with food, or fatigued with these multiplied exertions, the little fellow stops, droops its tail, and sings with great energy a short ditty something resembling the words come-to-me, come-to-me, repeated several times in quick succession, so loud, and yet so mellow, that it is always agreeable to listen to them. During spring, these notes are heard from all parts of the plantations, the damp woods, the swamps, the sides of creeks and rivers, as well as from the barns, the stables and the piles of wood, within a few yards of the house. I frequently heard these Wrens singing from the roof of an abandoned flat-boat, fastened to the shore, a small distance below the city of New Orleans. When its song was finished, the bird went on creeping from one board to another, thrust itself through an auger-hole, entered through the boat's side at one place, and peeped out at another, catching numerous spiders and other insects all the while. It sometimes ascends to the higher branches of a tree of moderate size, by climbing along a grape-vine, searching diligently amongst the leaves and in the chinks of the bark, alighting sidewise against the trunk, and moving like a true Creeper. It possesses the power of creeping and of hopping in a nearly equal degree. The latter kind of motion it employs when nearer the ground, and among piles of drifted timber. So fond is this bird of the immediate neighbourhood of water, that it would be next to impossible to walk along the shore of any of the islands of the Mississippi, from the mouth of the Ohio to New Orleans, without observing several on each island.

Among the many species of insects which they destroy, several are of an aquatic nature, and are procured by them whilst creeping about the masses of drifted wood. Their chirr-up and come-to-me come-to-me seldom cease for more than fifteen or twenty minutes at a time, commencing with the first glimpse of day, and continuing sometimes after sunset.

The nest of the Carolina Wren is usually placed in a hole in some low decayed tree, or in a fence-stake, sometimes even in the stable, barn, or coach-house, should it there find a place suitable for its reception. I have found some not more than two feet from the ground, in the stump of a tree that had long before been felled by the axe. The materials employed in its construction are hay, grasses, leaves, feathers, and horse-hair, or the dry fibres of the Spanish moss; the feathers, hair or moss forming, the lining, the coarse materials the outer parts. When the hole is sufficiently large, the nest is not unfrequently five or six inches in depth, although only just wide enough to admit one of the birds at a time. The number of eggs is from five to eight. They are of a broad oval form, greyish-white, sprinkled with reddish-brown. Whilst at Oakley, the residence of my friend JAMES PERRIE, Esq. near Bayou Sara, I discovered that one of these birds was in the habit of roosting in a Wood Thrush's nest that was placed on a low horizontal branch, and had been filled with leaves that had fallen during the autumn. It was in the habit of thrusting his body beneath the leaves, and I doubt not found the place very comfortable.

They usually raise two, sometimes three broods in a season. The young soon come out from the nest, and in a few days after creep and hop about with as much nimbleness as the old ones. Their plumage undergoes no change, merely becoming firmer in the colouring.

Many of these birds are destroyed by weasels and minxes. It is, notwithstanding, one of the most common birds which we have as residents in Louisiana. They ascend along the shores of the Mississippi as high as the Missouri river, and along the Ohio nearly to Pittsburgh, although they do not occur in great numbers in the neighbourhood of that city. They are common in Georgia, the Carolinas, Kentucky, Ohio and Indiana. A few are to be seen along the Atlantic shores as far as Pennsylvania, New Jersey and New York. In New Jersey I have found its nest, near a swamp, a few miles from Philadelphia. I never observed them farther to the eastward. I found it very numerous in the Floridas and all along the coast of the Mexican Gulf to within the Texas, where it spends the whole year. Mr. TOWNSEND mentions it as being found on the Missouri.

The dwarf buck-eye, on a blossomed twig of which this pair of Great Carolina Wrens are placed, is by nature as well as name a low shrub. It grows near swampy ground in great abundance. Its flowers, which are scentless, are much resorted to by Humming-birds, on their first arrival, as they appear at a very early season. The wood resembles that of the common horse-chestnut, and its fruit is nearly the same in form and colour, but much smaller. I know of no valuable property possessed by this beautiful shrub.

Adult Male
Bill nearly as long as the head, subulato-conical, slightly arched, compressed towards the tip; upper mandible with the sides convex towards the end, concave at the base, the edges acute and overlapping; under mandible with the back and sides convex. Nostrils oblong, straight, basal, with a cartilaginous lid above, open and bare. Head oblong, neck of ordinary size, body ovate. Legs of ordinary length; tarsus longer than the middle toe, compressed, anteriorly scutate, posteriorly edged; toes, scutellate above, inferiorly granulate; second and fourth nearly equal, the hind toe almost as long as the middle one, third and fourth united as far as the second joint; claws long, slender, acute, arcuate, much compressed.

Plumage soft, lax, and tufty. Wings short, very convex, broad and rounded, the first quill very short, the fourth longest. Tail rather long, curved downwards, much rounded, of twelve narrowish, rounded feathers. Bill wood-brown above, bluish beneath. Iris hazel. Legs flesh-colour. The general colour of the upper part is brownish-red. A yellowish-white streak over the eye, extending far down the neck, and edged above with dark brown. Quills, coverts and tail barred with blackish-brown; secondary and middle coverts tipped with white; shafts of the scapulars white. Throat greyish-white, under parts reddish-buff, paler behind. Under tail-coverts white, barred with blackish.

Adult Female.
The female differs from the male in being lighter above, tinged with grey beneath, and in wanting the white tips of the wing-coverts.

The trachea is 1 1/2 inches long, considerably flattened, scarcely 1 twelfth broad at its widest part, and contracting to 1/2 twelfth; the rings 58, with 2 additional dimidiate rings. The muscles as in all the singing birds, those of the inferior larynx considerably developed. Bronchial half rings about 15.

There is a pretty large oblong salivary gland in the usual place, opening with a single duct into the fore part of the mouth.

Leaves quinate, smooth, unequally serrated; racemes lax; generally with ternate flowers; corollas tetrapetalous, their connivent claws of the length of the calyx; stamens seven, shorter than the corolla. The flowers are scarlet. 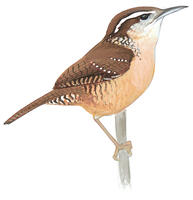