While on Sand Key, which is about six miles distant from Cape Sable of the Floridas, in lat. 24 degrees 57 minutes north, and 81 degrees 45 minutes long. west of Greenwich, I shot three birds of this species on the 28th of May, 1832. I had at first supposed them to be Tell-tale Godwits, as they walked on the bars and into the shallows much in the same manner, and, on obtaining them, imagined they were new; but on shewing them to my assistant Mr. WARD, who was acquainted with the Greenshank of Europe, he pronounced them to be of that species, and I have since ascertained the fact by a comparison of specimens. They were all male birds, and I observed no material difference in their plumage. We did not find any afterwards; but it is probable that we had seen some previously, although we did not endeavour to procure them, having supposed them to be Tell-tales. Almost all the birds seen in the Floridas at this date had young or eggs; and this circumstance increased my surprise at finding all the three individuals to be males. They had been shot merely because they offered a tempting opportunity, being all close together, and it is not often that one can kill three Tell-tales at once. As I am not acquainted with the habits of this species, I have applied to my friend Mr. MACGILLIVRAY, who has kindly furnished me with the following notice of them as observed in the Hebrides.

"The Greenshank is seen in the Outer Hebrides early in spring, and generally departs in October, although I have observed individuals there in November. Previous to the commencement of the breeding-season, and after the young are fledged, it resorts to the shores of the sea, frequenting pools of brackish-water at the head of the sand-fords, and the shallow margins of bays and creeks. Its habits are very similar to those of the Red-shank, with which it associates in autumn. It is extremely shy and vigilant, insomuch that one can very seldom shoot it, unless after it has deposited its eggs. Many individuals remain during the summer, when they are to be found by the lakes in the interior, of which the number in Uist, Harris, and Lewis is astonishing. At that season it is very easily discovered, for when you are perhaps more than a quarter of a mile distant, it rises into the air with clamorous cries, alarming all the birds in its neighbourhood, flies round the place of its nest, now wheeling off to a distance, again advancing towards you, and at intervals alighting by the edge of the lake, when it continues its cries, vibrating its body all the while. I once found a nest of this bird in the island of Harris. It was at a considerable distance from the water, and consisted of a few fragments of heath and some blades of grass, placed in a shallow cavity scraped in the turf, in an exposed place. The nest, in fact, resembled that of the Golden Plover, the Curlew, or the Lapwing. The eggs, placed with their narrow ends together, were four in number, pyriform, larger than those of the Lapwing, and smaller than those of the Golden Plover, equally pointed with the latter, but proportionally broader and more rounded at the larger end than either. The dimensions of one of them, still remaining with me, are two inches exactly, by one inch and three-eighths; the ground colour is a very pale yellowish-green, sprinkled all over with irregular spots of dark brown, intermixed with blotches of light purplish-grey, the spots, and especially the blotches, more numerous on the larger end. Although in summer these birds may be seen in many parts of the islands, they are yet very rare, a pair being to be met with only at an interval of several miles. In other parts of Scotland they are seen chiefly in autumn, but are of rare occurrence."

It is curious how nearly by this account the habits of the Greenshank correspond with those of the Tell-tale Godwit, Totanus vociferus.

Bill long, slender, compressed, tapering, slightly recurved. Upper mandible with the dorsal line very slightly curved upwards, the ridge convex, the sides grooved nearly to the middle, afterwards convex, the edges inflected and directly meeting those of the lower mandible, the tip narrowed and slightly deflected. Nostrils basal, linear, pervious, nearer the edge than the dorsal line. Lower mandible with the angle very narrow and medial, beyond it the outline straight and ascending, the sides grooved as far as the angle and convex, the edges sharp and inflected, the point very narrow.

Head small, oblong, narrowed before. Neck rather long, slender. Body slender. Feet long and slender; tibia bare for half its length, scutellate before and behind; tarsus long, slender, covered before and behind with numerous scutella, the narrow lateral spaces with extremely small oblong scales. Toes small, very slender, scutellate above, flat beneath, marginate, the middle toe connected with the outer by a basal membrane, with the inner by an extremely small one; first toe extremely small, second slightly shorter than fourth, third considerably longer. Claws small, compressed, arched, rather obtuse, that of third toe with a dilated inner edge.

Plumage soft and blended, on the fore part of the head very short, on the neck short and almost downy. Wings rather long, very acute, narrow; primaries tapering and rounded, the first longest, the second little shorter, the rest rapidly graduated; secondaries obliquely rounded, the inner elongated and tapering. Tail short, of twelve narrow, rounded feathers, the two middle ones considerably longer than the rest.

Bill dusky-green, black at the end. Iris brown. Feet dull greenish-grey. A broad band from the bill to the eye, all the lower parts, as well as the back, excepting a small portion anteriorly, pure white; that colour, however, does not appear on the back, when the wings are closed, it being covered over by the scapulars. Loral space white, marked with small oblong spots of greyish-brown; sides of the lower part of fore-neck and a portion of the breast faintly barred with grey. The upper part of the head, and the hind part and sides of the neck are greyish-white, with longitudinal central greyish-brown markings. The scapulars and inner secondaries are greyish-brown, the feathers edged with greyish-white, and lined or mottled with dark brown towards the margins; the smaller wing-coverts plain, the larger darker near the edge and margined with whitish, as are the outer secondaries; the primary quills and their coverts dark brown, the shaft of the outer white. The tail is greyish-white, undulated with light brown, the four outer feathers on each side with only a series of spots on the outer edge, which on the outermost feathers is almost obliterated. 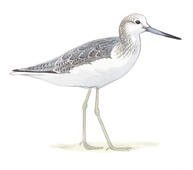