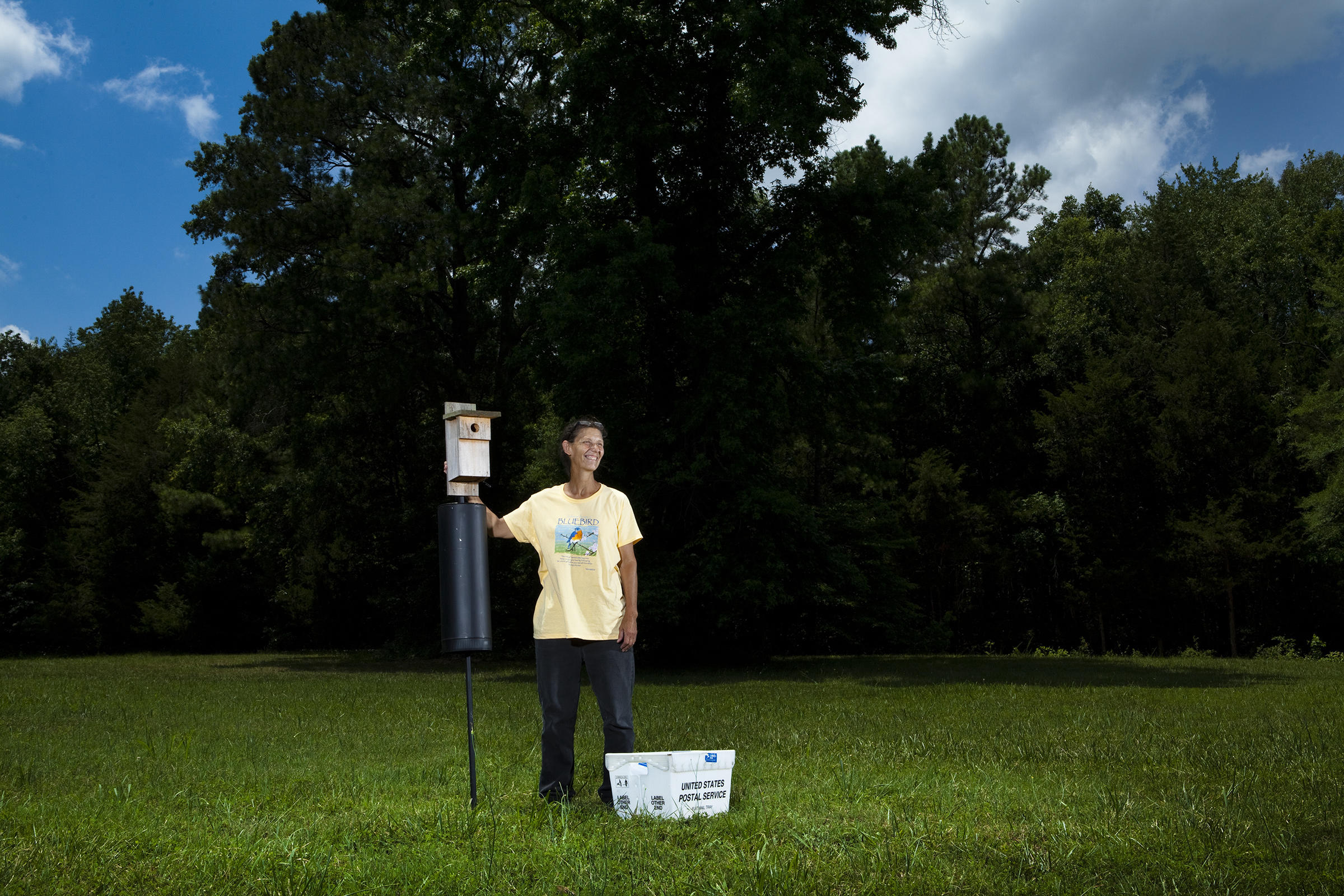 A Virginia postal worker has turned her route into a haven for nesting eastern bluebirds.

On a stifling summer afternoon, Rita Shultz has sweated through her yellow T-shirt where her long brown braid hangs, but she doesn’t seem to notice the heat. She’s too focused on assembling a birdhouse with her builder pal, Mick Knight. Although there are already two boxes on this property, the yard has no bluebird families, so Shultz is trying again. On the clock, this 58-year-old with a throaty laugh delivers mail to homes along the tree-lined streets of a rural route west of Richmond. On her own time, she revisits many of those yards to check on the eastern bluebirds living in her homemade shelters.

Jean Bozarth picks weeds from her garden as she watches the Mail Ma’am (a neighborhood nickname for Shultz) and Knight hammer a black metal pole into her front lawn. “It takes a village to raise a bluebird,” Bozarth says without irony, as the builders fit a black metal baffle on the pole to ward off predators and then mount a 12-inch rectangular wooden structure on top. They face the box’s circular opening toward the paved street. The whole operation takes just a few minutes, yet it can provide a home for generations of bluebirds.

With permission from homeowners and help from Knight and her twin sister, Risa Elliott, Shultz has installed 110 of these boxes along her route in three-plus years. Her Host-a-House effort seeks to foster peace between bluebirds and the residents in whose newspaper boxes they sometimes nest. “People feel like they’re vermin, like they’re dirty or diseased,” Shultz says. “So they’ll get rid of the nest—even one with eggs or chicks.” Her structures offer a safe alternative, and one that may give the cavity nesters options against hole-stealing, nonnative species like European starlings and house sparrows. Current bluebird populations are stable, and the brilliant blue, six-inch thrushes are common; by offering them alternate homes, Shultz hopes to keep things that way.

The program’s achievements can be measured by the number of successful offspring. Shultz, a licensed bander, tagged about 200 chicks in 2011, more than double the previous year’s total.She sends all data she collects to a fellow bander who passes the information on to the Bird Banding Laboratory run by the U.S. Geological Survey.

“To see Rita at her best, watch her band a bluebird,” says Ann Ramsey, who lives along Shultz’s route and has several boxes on her property. “She gently reaches into the nest, where the mother is sitting on her eggs—nesting box, courtesy of Rita—quickly wraps a band around her leg, and off she flies. No harm done. The nesting mother comes right back to her eggs.” 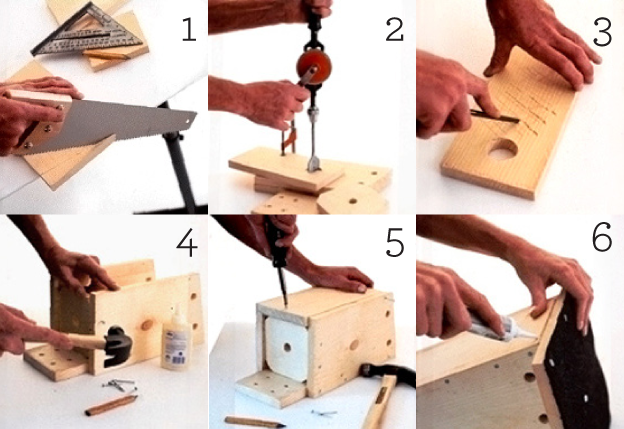 Click here for easy-to-follow directions for building a bluebird box.

Getting it all done requires a do-it-yourself mentality that’s obvious when chatting with Shultz.To enlist volunteer lawns, she mailed—via the U.S. Postal Service, of course—75 letters explaining her vision, along with self-addressed, stamped postcards for interested homeowners to mail back. “I thought I’d get about 25 responses,” she says, pausing. “I got 67”—about a 90 percent response rate! One neighbor, who happens to be a machinist, built support structures for 50 baffles for free. And some clever thinking and smart math turned up a way to make three boxes for the price of one. Shultz fronted the project’s initial $1,000 cost and continues to pump into it any available funds she has. She never asks people to pay for their bluebird boxes (though some insist on reimbursing her), and she personally cares for each one.

“We have people in Richmond Audubon who are bird banders, who are enthusiastic, clearly driven people,” says Caroline Coe, vice president of the chapter. “Rita is one of those. And she and her sister and her friend Mick are some of those exceptional banders.”With support from the chapter, Shultz works on an avian monitoring program and has previously helped with its silent auctions. During the little free time she has, she also leads bird walks and bands other avian species, including northern saw-whet owls and prothonotary warblers.

Coe notes that Shultz’s passion for birds is infectious, and that she’s always willing to share her massive store of self-taught knowledge with folks along her mail route. Kate Duval keeps watch over her box, sometimes through binoculars from her living room; in 2011 she had four hatchlings for the first time. No such luck for Bozarth. “They had beencoming sporadically,” she says. In previous years several bluebird families had produced eight or nine chicks in two houses she had installed herself. She seems worried about the prospects of their return yet assured that she and Shultz will somehow make the Bozarth boxes more hospitable. (As Audubon went to press, chicks had recently hatched in the newly installed box.)

“Birds are such miraculous little beings,” says Shultz. “That’s what draws me to them. They have that whole survival-of-the-fittest thing going on with migration.” And as if running a banding station, the Host-a-House program, and a mail route aren’t enough, Shultz has a new mission: to build great crested flycatcher houses. She’s already put up three.

This story originally ran in the July-August 2012 issue as "Priority Mail."