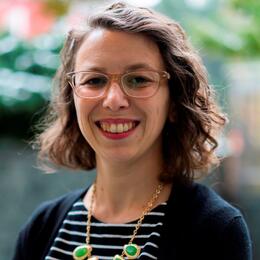 Tell Congress: Protect Seabirds and the Places They Need

Urge Congress to support the laws and policies that protect seabirds from threats like overfishing and climate change. 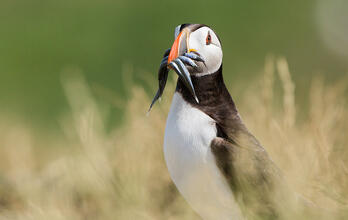 This year, twice as many seabird chicks survived the summer and fledged from their nests along the coast of Maine compared to last year. This exciting success rate is much closer to what’s considered normal for Maine’s seabird colonies, following a steep decline last year as climate change dealt a blow to nesting birds like Atlantic Puffins and Common Terns.

The welcome news comes from the Gulf of Maine Seabird Working Group, a group of scientists from Audubon’s Seabird Institute, state and federal wildlife agencies, and other conservation groups that monitor and protect seabirds from Massachusetts to Canada.

Every year, Audubon’s Seabird Institute hires several crews of seasonal researchers to monitor nesting seabirds on seven remote islands off the coast of Maine. These intrepid scientists live for months on these undeveloped islands without power or running water, all so they can record the birds’ every move—how many eggs they lay, the type of fish they bring in to feed their chicks, how many survive from one year to the next, and more.

What these researchers are learning is crucial to Audubon’s work to protect seabirds and the places—and fish—they need to survive. Seabirds rely on small, schooling fish known as forage fish to eat and to feed their growing chicks. But baby seabirds can’t eat just any fish. Hake, herring, haddock, and sand lance are all ideal meals for them because they’re nutritious and just the right size—long and skinny, easy for a young puffling to get down in one gulp.

However, climate change is making these favorite fish hard to come by around seabird nesting islands. The Gulf of Maine is warming faster than 99 percent of the world’s oceans, and 2021 saw the warmest average surface water temperatures ever recorded there. Those warming waters are driving forage fish further offshore and deeper in the ocean to find their preferred cold water, oftentimes putting them out of reach of tired seabird parents who need to feed their hungry chicks.

This spelled disaster for seabirds last year. Atlantic Puffin parents desperate to feed their chicks often brought back butterfish, a mid-Atlantic species more prevalent when the Gulf of Maine heats up. That oval fish is too wide for small chicks to swallow. That same summer, an early-season tropical storm passed through the area. Sadly, many seabird chicks died from starvation or hypothermia. The number of puffin chicks that lived long enough to fledge from their nests last year was sadly cut in half.

This year, however, was a welcome change. Derrick Z. Jackson, a journalist, co-author of The Puffin Plan, and photography instructor for Hog Island Audubon Camp, visited several seabird nesting islands this year and described what he saw as a “breeding bonanza,” with no shortage of nutritious fish available. That included the spectacular sight of many puffins and terns returning from the ocean with foot-long Atlantic saury dangling from their beaks. Project Puffin founder Steve Kress recently told Jackson for the Maine Monitor that the saury, narrow enough for chicks to still eat, was “the surprise for this year,” reinforcing how adaptable seabirds are to whatever food is available.

Based on reports from the Gulf of Maine Seabird Working Group, it is possible that the number of breeding pairs of common terns in the region has surged from 27,500 in 2019 to about 30,000. Eastern Egg Rock, the island where Project Puffin began, saw the highest number of Common Tern nests in 20 years, and the number of active puffin burrows surged back to nearly pre-heatwave levels.

“It’s as if the birds came back with a vengeance,” Pond Island Supervisor Dallas Jordan said. Last year, Pond was one of the hardest-hit islands in the Gulf of Maine, as half of the terns abandoned the island when a Great Horned Owl and a Peregrine Falcon descended to gobble up birds. This summer the colony rebounded from 700 Common Tern nests to a record 1,580.

“You can’t overstate what that all means,” Jordan said. “It’s amazing to see the birds come back. But when you look at the big picture, we’ve entered a cycle where the birds can’t rely on anything anymore. They’ve evolved for thousands of years to be accustomed to reliable sites. They’re long-lived birds, so they can handle a bad year here and there. The question is what happens with more bad years.”

2022 was not without its dramas. Avian flu, which took out thousands of seabirds in colonies in Europe and Canada, was discovered on several nesting islands in Maine this year. Thanks to the tireless work of our researchers, the number of birds lost to the disease was minimal.

This work began nearly 50 years ago, when Steve Kress, then an ornithology instructor at Hog Island Audubon Camp, set out to restore Atlantic Puffins to Maine after they had virtually disappeared due to hunting and egg poaching in the late 19th century. Beginning in 1973, he and colleagues brought puffin chicks from Newfoundland more than 800 miles away to Eastern Egg Rock in Maine. They fed them until they fledged, flying off into the Atlantic Ocean. Kress hoped that years later, when puffins seek islands to breed, they would pick Eastern Egg Rock instead of Newfoundland. To attract the birds, his team set up decoys and mirrors to give the birds the illusion of a well-established nesting island. Project Puffin succeeded—the birds returned and began breeding in 1981. Today, there are 1,300 pairs of Atlantic Puffins in the Gulf of Maine, fueling a busy coastal economy and cultural identity for the state. Last year, 20,000 people circled Eastern Egg Rock on tour boats for a glimpse of these charismatic birds.

This year, the research team on Matinicus Rock was delighted to find an inspiring symbol of that Project Puffin legacy up close. One of the adult puffins raising a chick on that island this year was identified, thanks to the band on its leg, as a 33-year-old bird—older than each of the researchers themselves. In fact, that very bird was one of the original puffin chicks relocated from Newfoundland to Maine in 1989 by Steve Kress.

While the successful breeding numbers this year does not foretell what future years will look like, it is a welcome moment of hope for our researchers. Their work to protect and sustain these vital nesting islands is helping to mitigate the effects of climate change, at least for the time being.

“It symbolizes that we are not yet at the point of no return,” said Petit Manan Island Supervisor Hallie Daly. “We’ve had so much doom and gloom that nothing can be done and this is proof that it can.”