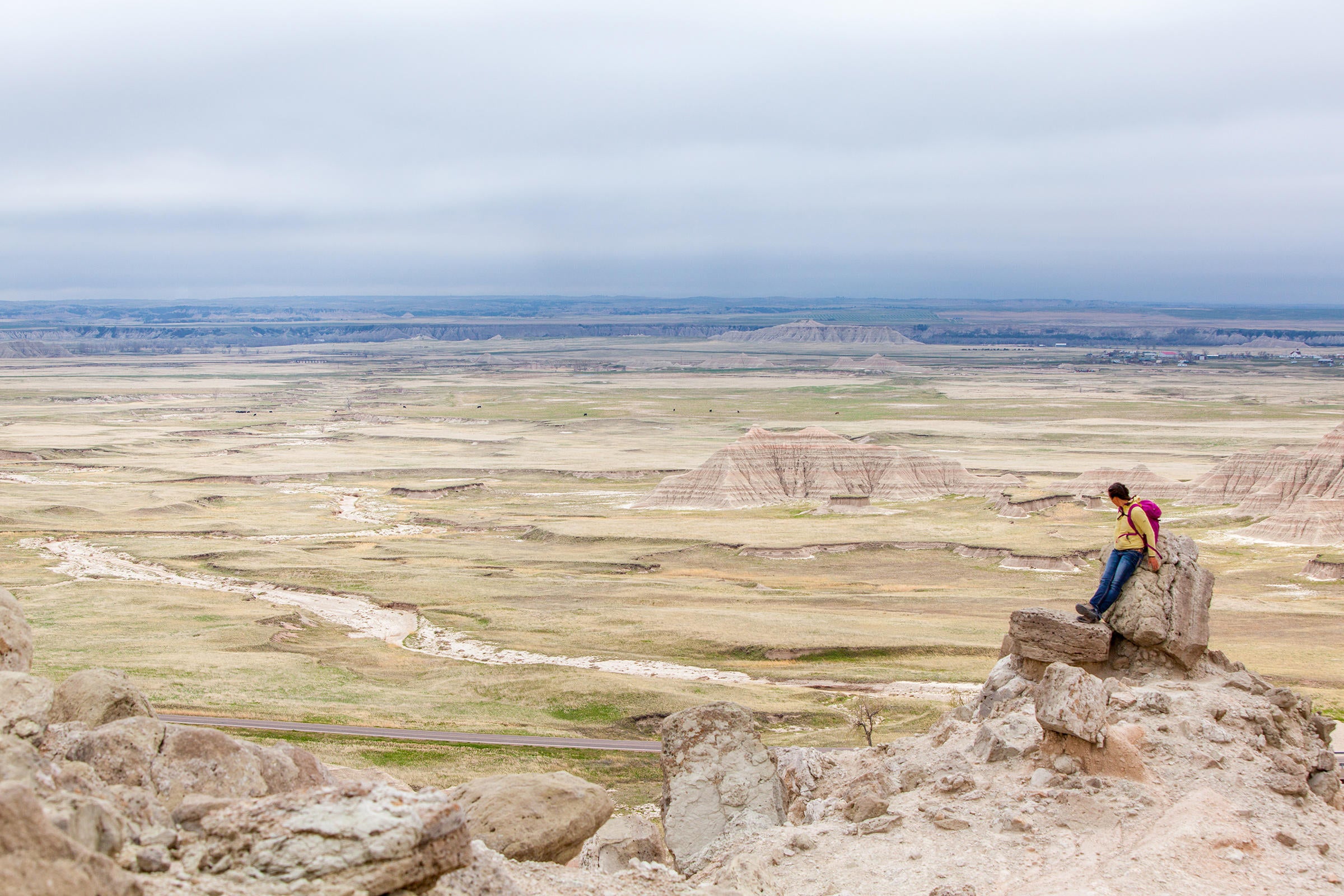 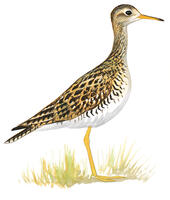 South Dakota encompasses a wealth of birding opportunities across landscapes of surprising diversity. Much of the state is grassland, or former grassland converted to crops and pasture, but hills, large reservoirs, and wooded areas provide contrast.

In the central part of the state, massive Lake Oahe attracts ducks, geese, Bald Eagles, shorebirds, gulls, and terns. The recreation area just downstream from the dam has one of the highest species totals in South Dakota. Not far from there, Fort Pierre National Grasslands is a hotspot for prairie birds. And to the east, Newton Hills State Park and Adams Nature Preserve are two fine places to search for migrant and breeding songbirds.

A series of regional birding-trail guides serves as a resource to dozens of sites around the state, including among South Dakota’s bird-rich prairie potholes and the wind-eroded pinnacles of the Badlands.

Huge flocks of geese and ducks pass through Sand Lake in spring and fall, sometimes numbering more than a million. It’s this phenomenon, as well as other waterbirds, for which the refuge is best known. Sand Lake was the first place in South Dakota to record nesting Great Egret, Snowy Egret, Little Blue Heron, Cattle Egret, and White-faced Ibis.

Many of the duck species that pass through in migration also nest here, such as Gadwall, Blue-winged Teal, Redhead, and Ruddy Duck. Other birds nesting around and in the lakes and marshes include Pied-billed Grebe, Eared Grebe, Western Grebe, Clark’s Grebe, Double-crested Cormorant, American White Pelican, American Bittern, Black-crowned Night-Heron, White-faced Ibis, American Avocet, Wilson’s Phalarope, Franklin’s Gull, Black Tern, and Forster’s Tern. The birding depends on the water level, however, and conditions can change from year to year.

A 15-mile route begins at the refuge headquarters south of Highway 10 and circles areas of open water and marsh. The drive is generally open from April 1 to mid-October, but weather can change the timing.

Noted for waterbirds, Lake Andes National Wildlife Refuge is located in the southern part of South Dakota, on the edge of a 4,700-acre prairie lake. Surrounding grasslands and woodlands augment its species list of well over 200.

One of the highlights is a nature trail near refuge headquarters that traverses woods, passes by a series of ponds, and reaches the open water of Owens Bay. Local roads provide access to the lake and shoreline.

Osprey and Sandhill Crane sometimes appear in spring, and Bald Eagle is present throughout the year. When water levels are right, shorebirds can be common in spring and fall.

Spectacular scenery of eroded spires and multicolored cliffs draws around a million visitors to this national park—a stark and striking landscape unlike any other. Those who can take their eyes off the terrain will find good birds here too.

For the max number of species, it’s important to visit various Badlands habitats, such as Cliff Shelf (where cottonwoods and junipers grow), Conata Road (for grassland birds), prairie dog towns, and the woodlands near the Sage Creek campground.

The dam that forms expansive Lake Oahe sits in the Missouri River just north of the capital city of Pierre. It’s a tradition for local birders to search the area right below the dam from fall into winter for gulls and other species. The water here doesn’t freeze, and the fish that pass through the dam provide plentiful food for varied species.

Ring-billed, California, and Herring gulls are most common, but over the years birders have spotted many rarities, including Black-legged Kittiwake, Iceland Gull, and Glaucous Gull. Franklin’s Gull often migrates through. In addition, dozens of Bald Eagles might roost and feed along the river here. Osprey is a regular in spring and fall.

The dam area is a good place to look for waterfowl, loons, grebes, and terns, especially during migration. The cottonwoods along the Missouri River can be productive for migrant songbirds. The site’s species list, which totals more than 200, shows its year-round birding appeal.

Fourteen miles northwest of Brookings, this park and the neighboring glacial lakes and wetlands are best known for flocks of waterfowl in spring migration. Twenty species might be seen in a day, with great numbers of Snow Geese.

About 20 miles south of Sioux Falls, Newton Hills State Park is part of the Prairie Coteau region, an area of glacially formed hills. Its rugged terrain, covered in large path with deciduous forest, makes it one of South Dakota’s best birding sites. The park also includes some prairie tracts.

Located in southern South Dakota, just seven miles from the Nebraska state line, Lacreek comprises 16,410 acres on the edge of the Nebraska Sandhills—a distinctive region of rolling grassland and abundant wetlands. The refuge has large areas of impounded wetlands managed for waterfowl, marsh birds, and shorebirds.

The driving tour here passes closely by many wetlands, as well as a prairie dog town where Burrowing Owl can be seen. There are designated trails, and visitors can also walk along some of the impoundment dikes.

One notable bird here is Trumpeter Swan, a species of special management concern. Others that might be seen on a drive around the refuge include Gadwall, Blue-winged Teal, Northern Pintail (among other ducks), Western Grebe, American White Pelican, American Bittern, Black-crowned Night-Heron, Virginia Rail, Sora, American Avocet, Willet, Wilson’s Snipe, Wilson’s Phalarope, Black Tern, Forster’s Tern, Marsh Wren, and Yellow-headed Blackbird. When water levels in the impoundments are low, shorebirds can be abundant in August and September.

The rugged Black Hills of southwestern South Dakota are unlike the rest of the state—in terms of birds, the region more closely resembles the Rocky Mountains. The highest point is Harney Peak at 7,244 feet. Ponderosa pine covers much of the range, but spruce grows in the highest elevations. It’s a big area, but the 22-mile Spearfish Canyon Scenic Byway provides a good introduction to the bird life.

Pullouts and scenic areas can be found all along the byway. About 13 miles up the canyon, hike the trail around Roughlock Falls for good birding. At the upper end of Spearfish Canyon, at Cheyenne Crossing, take Highway 85 west a short distance, then drive south on Hanna Road in Black Hills National Forest toward Hanna Campground, another good birding area.

The prairie potholes region of the Midwest is known for thousands of large and small ponds and wetlands. There, glaciers created depressions that later filled with water. The habitat is of vital importance to populations of ducks and other wetland and marsh birds.

More than 245 species of birds have been recorded on the 4,650-acre Waubay National Wildlife Refuge, a classic example of the prairie potholes environment. (Waubay comes from the Lakota word for where waterfowl build their nests.) The gathering of geese and ducks in spring migration might be the most memorable of Waubay’s birding experiences.

Several trails near the refuge headquarters pass through prairie and woodland ecosystems and alongside wetlands. Roads outside the refuge provide access to and offer views of Waubay Lake.

Fort Pierre spans a huge area south of the capital city of Pierre with very little development. Birders are attracted to it for nesting prairie species and winter owls and raptors. If possible, it’s best to stop by the ranger office for advice before setting out. However, it’s also possible to simply head south on Highway 83, turn east on County Line Road about 11 miles south of Fort Pierre, and explore side roads.

Early in spring, the national grasslands office takes reservations for blinds to watch the “dancing” of Greater Prairie-Chicken. Staff move the blinds as the birds move their display ground. Viewing this courtship ritual is an exciting experience.

In winter, birds such as Golden Eagle, Rough-legged Hawk, Gyrfalcon, Northern Shrike, and Lapland Longspur might be found.

The first birders to follow this trail were Lewis and Clark, journeying up the Missouri River in 1804. They wouldn’t have called it a “great lakes” trail then— the name comes from three large reservoirs behind modern dams on today’s river. Other aspects of the landscape have changed as well, but it is still rich with habitats. East meets west here, with eastern bluebirds and western meadowlarks singing alongside the same fields, and eastern and western kingbirds nesting in the same cottonwood groves. Visitors from afar may be most fascinated in the grasslands. Marbled godwits, big cinnamon-tinged sandpipers, nest around prairie marshes in summer, sharing the skies with colorful little chestnut-collared longspurs and an array of other open-country species. Local birders are more likely to check out the reservoirs’ edges, especially during migration, when rare water birds may drop in. On the Missouri’s undammed stretches, piping plovers and dainty least terns nest on the sandbars, while many other shorebirds stop over on migration. Search along this trail’s byways and you’ll agree that the area remains, even two centuries after the first explorers, a fabulous region for discovery. —Kenn Kaufman