I've read somewhere that the West Virginia town of Bluefield, which sits smack dab on the Virginia state line, was named for the fields of chicory flowers that reflected summer's azure skies way back when the place was a mountain community of a few hundred folks. Well, several acres of one of the most scraggly plants ever brought to these shores by European colonists would certainly be a pretty sight, though they wouldn't rival a sea of native bluebonnets down in Texas. Today the place is a fair-size metropolis (for West Virginia) and the fields of cultivated chicory are long gone, though I'm sure you would find some hardy examples in vacant lots. Bluefield now prides itself as "Nature's Air-Conditioned City," boasting that temperatures at its 2,600-foot elevation seldom hit 90 degrees.

Chicory in full bloom (From Wikepedia) 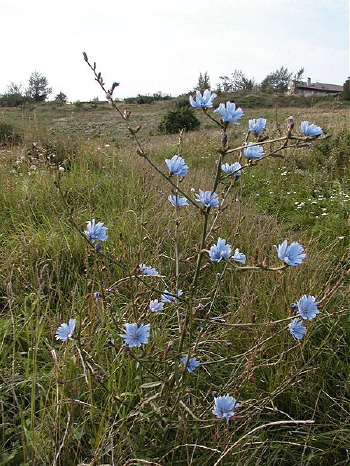 But I digress. My late friend Hal Borland once described the chicory flower as "an example of one of the best blues in the floral spectrum, blue as the innocent eyes of a six-year-old blonde," and no nature guide could offer a finer description. In our book A Countryman's Flowers, Hal noted that chicory, sometimes called "cornflower" or "blue sailors," thrives in waste places in heat and drought. When the highway department mowing machines ravage our roadsides in mid- summer, chicory bounces back thicker than ever. The plant's twig-like stems are so tough that I hope they dull the mower blades. Hal also said that if chicory were a rarer plant, the beauty of its blossoms would be noted and admired." Take a closeup look and you'll agree. 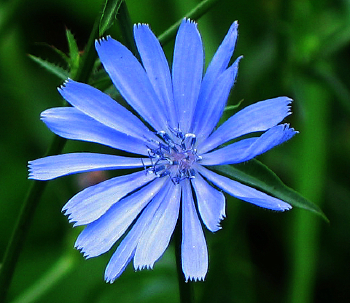 In the Old World, the roots of chicory (known also as succory in England) were dried and roasted for use as a coffee substitute or additive. Early American settlers naturally planted their own chicory supplies or even chicory farms like those in Bluefield, and like so many alien plants it escaped and spread like wildfire across the country. I have never (knowingly) tried chicory coffee, though it's a very popular brew in New Orleans. If you'd like to try it, a Big Easy shop called the French Market sells a variety of coffee-and-chicory blends, even decaf, or a bag of pure ground chicory. I've also read that supplies of coffee beans from Central and South America were disrupted during World War II and that most of the Joe consumed in the States back then was made from or with chicory. Perhaps that's why my Dad poured so much sugar in his morning cup before walking to the Carnation Milk cannery where he was foreman.

Young chicory leaves, meanwhile, have long been used in salads and Cooks.com offers a tantalizing recipe with a warm bacon and brown sugar dressing. (If you don't want to be seen gathering wild greens down the country lane, you can substitute endive or spinach.) Old herbals recommend chicory as a remedy for a variety of illnesses including pulmonary consumption, and there's a detailed discussion of the plant's history and use in England and on the Continent at Botanical.com. However, you can't pick stems of the pretty flowers for a bouquet. They last only a few hours. It's said that Carl Linneaus, the father of taxonomy, used chicory in his famous floral clock in Upsala, Sweden, because it regularly opened at 5 a.m. and closed at 10 a.m. at that high latitude. In England the flowers' lifetime is from 6 a.m. to noon. Here in New York's Hudson Valley, however, chicory blossoms remain open until mid-afternoon or even later along shady roadsides, charming us until autumn with nature's finest blue.