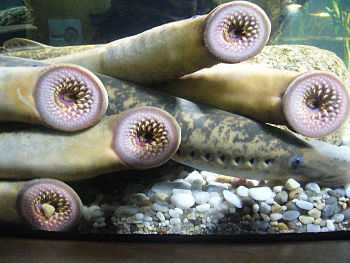 The jawless sea lamprey is all mouth. Credit: WikiMediaCommons

Like something out of a B-rated horror movie, the sea lamprey appears to be a slimy, writhing tube topped by a gaping, wound-like hole of a mouth. The mouth encompasses an entire cross section of its eel-like body and is lined with layers upon layers of pointed yellow teeth. With this mouth, parasitic sea lampreys attach themselves to fish, bore a hole into their victim’s body with their rasping tongue, and feed by sucking the blood and bodily fluids out of their still-living prey.

Sea lamprey’s parasitic propensity spelled bad news for the Great Lakes when the nasty critters first invaded the area over 100 years ago. Man-made canals allowed sea lampreys to bypass Niagara Falls, and the creatures spread from Lake Ontario to Lake Erie in 1919. The slippery invaders soon made their way to Lake Michigan, Lake Huron, and Lake Superior in the 1930s and 40s. Since then, sea lampreys have shared credit for decimating key predator species like the lake trout and salmon. In combination with unsustainable fishing practices in the Lakes, the jawless fish have helped derail entire ecosystems and harm species of commercial value. 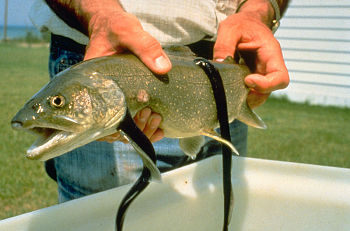 Scientists, the U.S. Fish and Wildlife Service, and Fisheries and Oceans Canada have battled these nasty critters for years. But now they may have a new combative technique in the arsenal: the reek of death. Sea lampreys, it seems, are repelled by the smell of other decaying sea lampreys. Lacing the water with whiffs of deceased sea lampreys could therefore allow scientists to divert still-living lampreys away from areas of high conservation concern, or even steer them into traps.

Lampreys’ strong reactions to death odors were previously dismissed as a fluke, but research published (subscription required) in the Journal of Canadian Fisheries and Aquatic Sciences now confirms the behavioral trend. Scientists placed wild-caught sea lampreys in a tank, then pumped the water full of the smell of the lamprey’s decaying comrades. “When they’re suddenly exposed to a good shot of this odor, we see a classic fright response,” says Michael Wagner, the lead author of the paper and an assistant professor at Michigan State University’s Fisheries and Wildlife Department. “They try to get away as fast as they can,” he says. 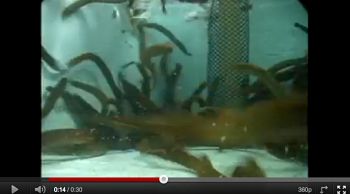 Check out this video of panicing lampreys. Credit: MSU

In terms of evolution, the sea lampreys’ dramatic response to the odor of death makes sense. Smelling dead sea lampreys could indicate that predators are nearby, and avoiding such areas would keep the lampreys away from the source of danger. And since the animals die after spawning, the smell of death could also indicate to late-coming sea lampreys searching for a mate that the breeding party in a particular stream is over.

In the past, researchers have tempted sea lampreys into traps by using attractive mating pheromones. Like salmon, lampreys mate only once in their life, dying after the big event. Sea lampreys use the odor of past generations of larvae to navigate their way into suitable streams for breeding. When females enter the stream, males emit sexy pheromones to lure the ladies onto nests to spawn. Scientists use these same chemical cues to trick and trap sea lampreys, but this technique doesn’t always work since streams are already loaded with many conflicting scents and environmental cues. Repellants like the smell of death, on the other hand, seem to be much more effective in corralling sea lampreys, Wagner says. 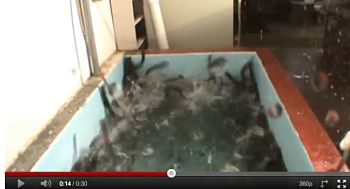 Wanna see more lampreys freaking out? Here's another video, this one shot from above. Credit: MSU

Wagner plans to use only a very small concentration of the death smell to divert sea lampreys on their search for mating grounds. “Essentially, we’re trying to give them an easy choice,” he says. To put the smell dosage into perspective, he says, we can think in human terms. For example, if a patron enters a restaurant and is suddenly engulfed in copious amounts of smoke, he’d probably panic and run out of the building, reacting much as the lampreys did to the experiment's strong death smell signal. But if the same patron notices a smoker is at a nearby table, the much lighter smell of cigarette smoke with simply act as a deterrent for choosing to sit in that area of the restaurant. Wagner hopes to create a similar effect, encouraging the lampreys simply to select one stream instead of another.

This technique, Wagner thinks, will prevent the lampreys from habituating to the smell of death, while still allowing the researchers to manipulate them. “If you go into a wastewater treatment plant, it’s the worst thing you’ve ever smelled for about 15 minutes,” he says, “but eventually you don’t even notice it anymore.” The same thing could happen to lampreys if scientists try to overdose the Lakes with death smells. “Pretty soon they’d just start to ignore it because their reproductive imperative is so strong,” Wagner predicts.

Ecologically, Wagner says there are two upsides of controlling sea lamprey’s paths. The animals can be concentrated into smaller areas, which means using fewer pesticides to kill them. They can also be deterred from entering streams with endangered or valuable species and instead directed to lower quality habitats where they’ll have less of an impact on the environment. And if researchers can combine the new and old techniques—using death smells to steer sea lampreys away from certain areas, and sex smells to lure them in to others—Great Lakes managers can create a push-pull method of rounding up and exterminating the invasive animals. “We can really get into the business of ecosystem management,” Wagner says.