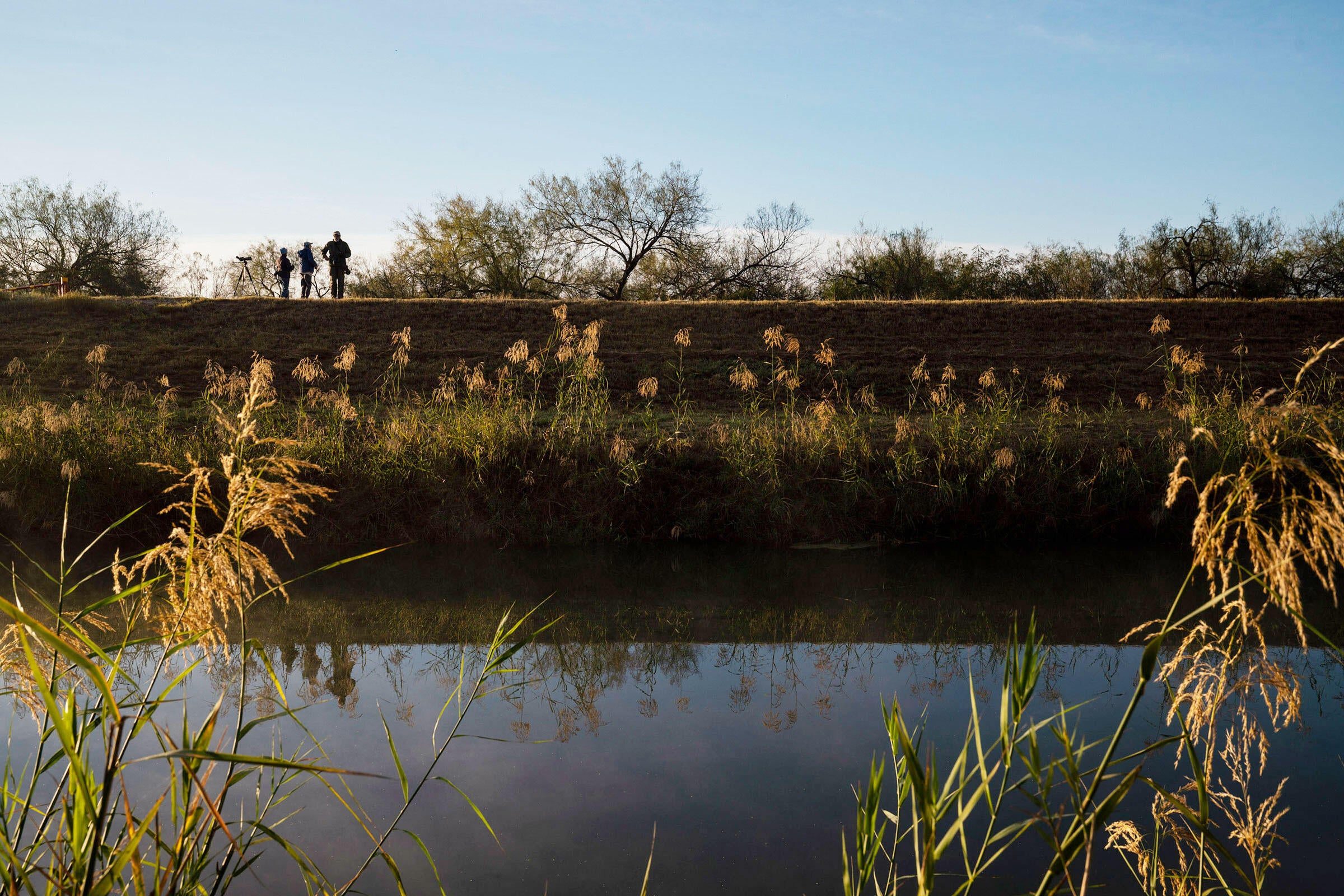 Birdwatchers participating in the Christmas Bird Count look for birds early morning at Bentsen-Rio Grande Valley State Park in Mission, Texas on Jan. 4, 2019. Construction on new sections of border wall will begin atop this levee as early as February if no legislative exemptions for this land are made. The majority of the park's land will end up on the south side of the wall; the park might be forced to close. Photo: Verónica G. Cárdenas 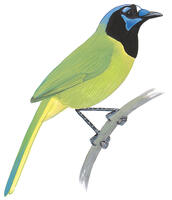 MISSION, TEXAS—The Rio Grande Valley in southern Texas is an ecological crossroads unlike anywhere else in the country. Here, Gulf Coast prairies meet South Texas brush country, the Central Flyway meets the Mississippi Flyway, and the United States meets Mexico. Along the Rio Grande’s banks survive the world’s last relicts of subtropical thorn forest, and the variety of wildlife—more than 500 bird species have been sighted here, including those typically found only in subtropical and tropical climes—brings $463 million into the valley annually from nature tourists.

But this unique intersection is shadowed by change. Population growth in the Rio Grande Valley is helping Texas become the fastest growing state. Demand for goods going north and south keeps highways busy. And the vision of an expanded border security plan looms.

Those changes aren't our focus on the morning of January 4th, though they’re hard to ignore. We’re standing on a chalky roadway, made of a natural cement called caliche, atop a levee—the best vantage point for spotting birds in this flat floodplain at Bentsen-Rio Grande Valley State Park, part of the World Birding Center.

The federal levees in Mission are also where the government secured an early round of funding for a new border wall section: six miles of concrete and steel fencing, dozens of feet tall, topped with industrial lighting that will blaze all night. In spite of a high-stakes funding standoff in Washington, construction on this stretch will start in February, adding to existing, disconnected wall sections built a decade ago. In many areas, the rusted, parallel steel bollards sit thousands of feet north of the river.

A Ford F-150—white with the distinctive green stripe of U.S. Border Patrol—slowly rolls past our group while we count American White Pelicans circling overhead. This year the large white birds with their distinctive throat pouches for gulping down fish are everywhere.

"Another," groans Roy Rodriguez in jest. He's an interpreter for the Texas Parks and Wildlife Department and the leader of the Audubon Christmas Bird Count circle in the Bentsen-Anzalduas Park area, which encompasses those two parks and the National Butterfly Center, a privately held nonprofit that earned national attention last year after surveyors visited the site in connection to border wall plans. Like an auctioneer, Rodriguez rattles off a mix of observations, facts, and pointers, and spots even those birds that seemingly don't want to be seen. Joanne Mozynski, designated list-keeper and relatively new birder, is challenged to keep up. "I'm not putting down any more pelicans," she jokes after nine more flap by.

Nearly every year since 1959 birders have spent a winter day tallying bird species within a 15-mile circle drawn around this part of the Rio Grande River. The tradition is part of Audubon's annual Christmas Bird Count, and circles at hundreds of locations across the United States have contributed to a long-running dataset of bird populations. Rodriguez says he used to do counts on both sides of the border, in the 1990s and early 2000s, forging relationships with Mexican landowners and sharing the results with those who cared. Now the count stays on the northern side of the border. 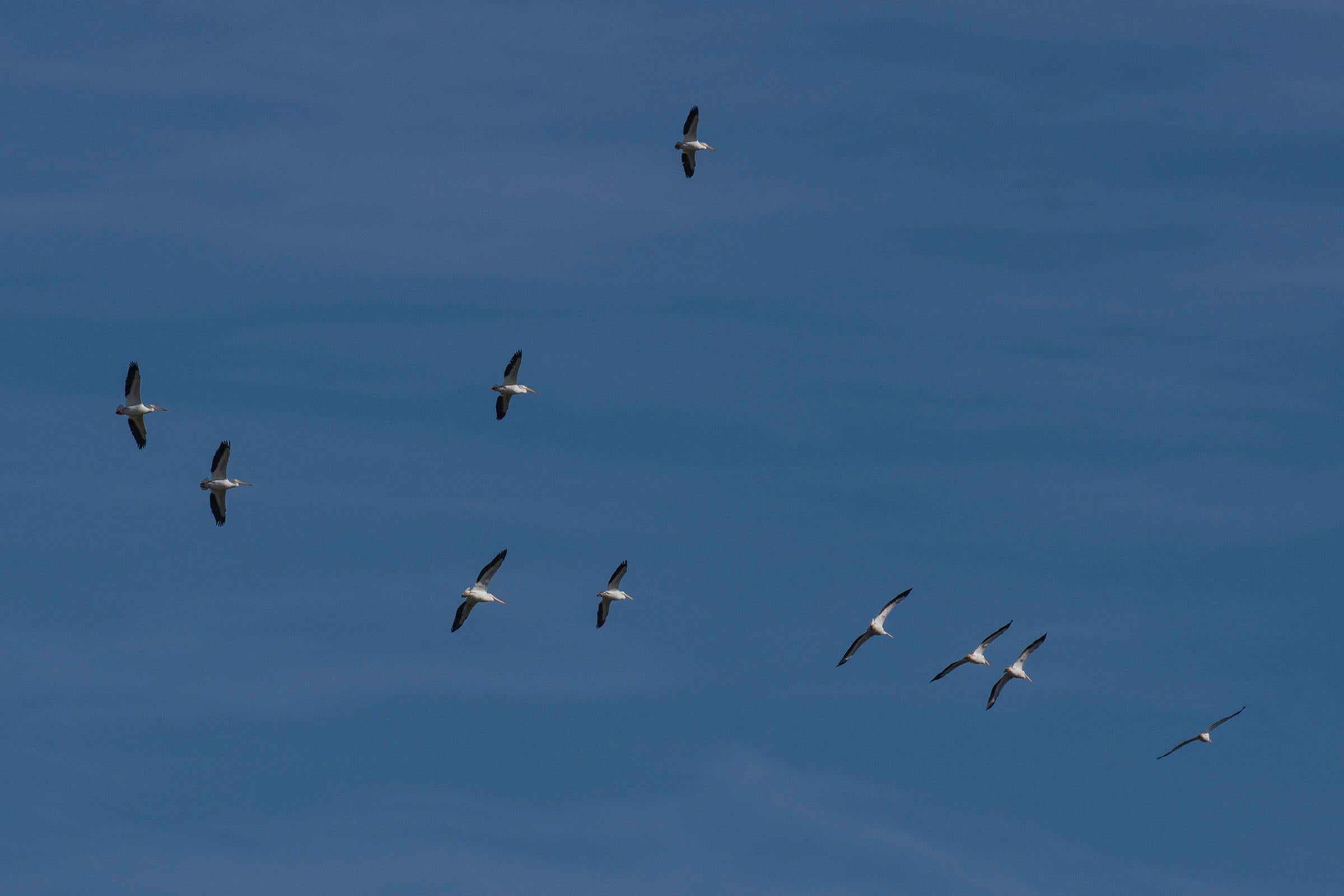 "There's a Red-Tailed Hawk," Rodriguez calls out. "And there's a Caracara," the raptor with a bright orange beak often mistaken for the national bird of Mexico. (The country’s flag actually features a Golden Eagle.)

From a loudspeaker comes an announcement in Spanish that carries across the border to a field of sugarcane we are surveying, spotting Great Egrets, Roseate Spoonbills, and a Vermilion Flycatcher. Rodriguez points out a Broad-winged Hawk he didn't expect to see here this time of year. The perched raptor, which breeds in the eastern United States and winters in South America, could have been held back by one of 2018’s many hurricanes, he says. Or it could be a confused juvenile.

"We're so far south we're practically in the tropics," he says. "That means that some of these birds don't really need to go much further south" to survive the winter.

The Rio Grande, the only major river for about a hundred miles, serves as a natural border between the United States and Mexico, from the Gulf of Mexico to El Paso in western Texas—about half the border’s total length. When temperatures spike and drought hits, animals travel up and down the cool river and stop to drink at resacas, the name given to the disconnected oxbows of the Rio Grande. They'll dry up naturally over the course of about a century, Rodriguez says, joining most of the area’s arroyos, or creek beds, that hold water only when a heavy rainfall comes through. Rare wildlife abounds, including federally endangered ocelots and jaguarondi, and exotic birds like the Crimson-collared Grosbeak, Blue Bunting, and Rose-throated Becard rarely seen in the United States.

The new wall construction puts all of that at risk. When the Department of Homeland Security begins construction on an eight-mile stretch and a six-mile stretch in February, workers will bulldoze 150 feet of land to the south of the barrier to build an "enforcement zone" lit by industrial lighting. The walls, which will sit on top of the existing levees, will bisect the National Butterfly Center and Bentsen State Park, leaving the park’s visitor’s center north of the wall and most of its 797 acres to the south. The Texas Parks and Wildlife Department might be forced to close the park entirely.

The department is not in favor of the wall; its director recently called on the public to ask elected officials to remove the park from the wall’s path. (Congress scrapped a planned section through nearby Santa Ana National Wildlife Refuge due to public outcry.) The National Butterfly Center, home to more than 200 species of butterflies, has also been outspoken in its disapproval of the plans.

What’s more, in October, more than 2,500 scientists, including some of the biggest names in ecology, expressed “unified concern” over the impact of current and future wall sections on wildlife. Walls destroy and fragment habitat, alter water flow, erode soils, destroy native vegetation, and kill animals directly or indirectly, the scientists wrote. They put endangered wildlife in danger of extinction. Bright lights operating all night long disorient and confuse animals. And infrastructure associated with the wall, like roads and bases, reinforce the damage.

Agents regularly patrol the roads in this area, even staging in the parking lots of the border parks. It's hardly a rare occurrence to see a Border Patrol helicopter hovering low, or a mix of local, state, and federal officers speeding through the area. Still, the number of undocumented immigrants apprehended at the border remains at the lowest levels since the 1970s. In fiscal year 2018, Border Patrol apprehended 396,579 undocumented immigrants; border apprehensions peaked in 2000 at 1,643,679. 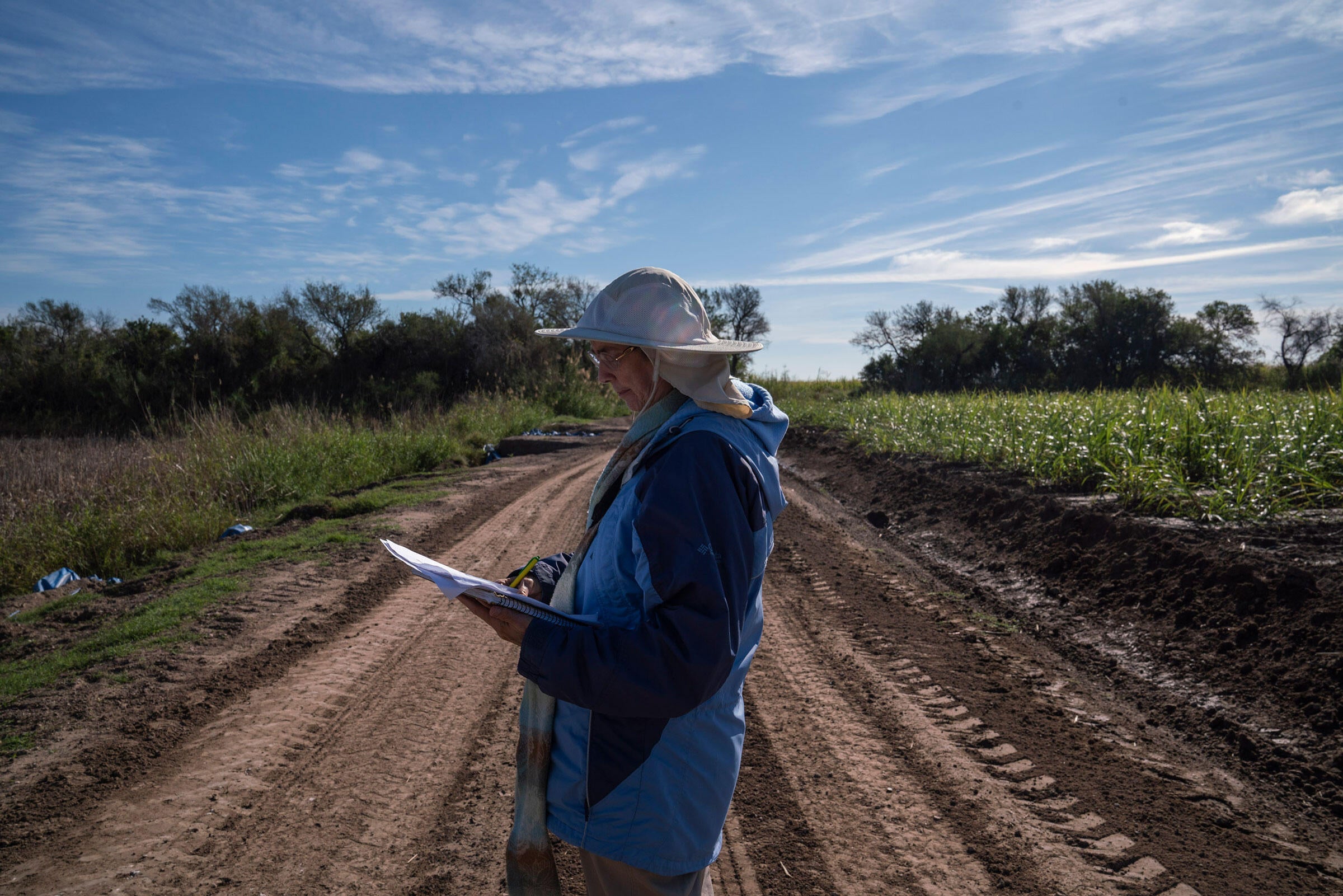 Joanne Mozynski, who is in charge of the bird list during the Christmas Bird Count, tallies some of the species the team has seen so far in a privately owned property in Mission, Texas. This area will end up south of the new border wall sections and will likely be closed to the count next year. Photo: Verónica G. Cárdenas

The federal levee system, which hugs the contours of the Rio Grande, must be crossed to access the river and its birdlife. But starting in 2016, the International Boundary and Water Commission, which owns the levees, began erecting red gates at entrances, and placed signs stating that access is not permitted.

"We can't go to some of the areas we used to go to," says Jonie Hubinger, “even in this Christmas Bird Count circle.” She and her husband Mark, a couple from Michigan who winter in Texas, noticed the changes starting several years ago. She says Border Patrol agents who patrol the levee personally told her she couldn't be there.

The government controls access to large tracts in this bird count radius, Rodriguez says. "They tell us which ones we can access, or we cannot." This year the government shutdown, which began in late December, prevented him from getting permits to access traditionally counted areas. And even when the government is functioning, he says, permits are sometimes withheld because of security concerns. 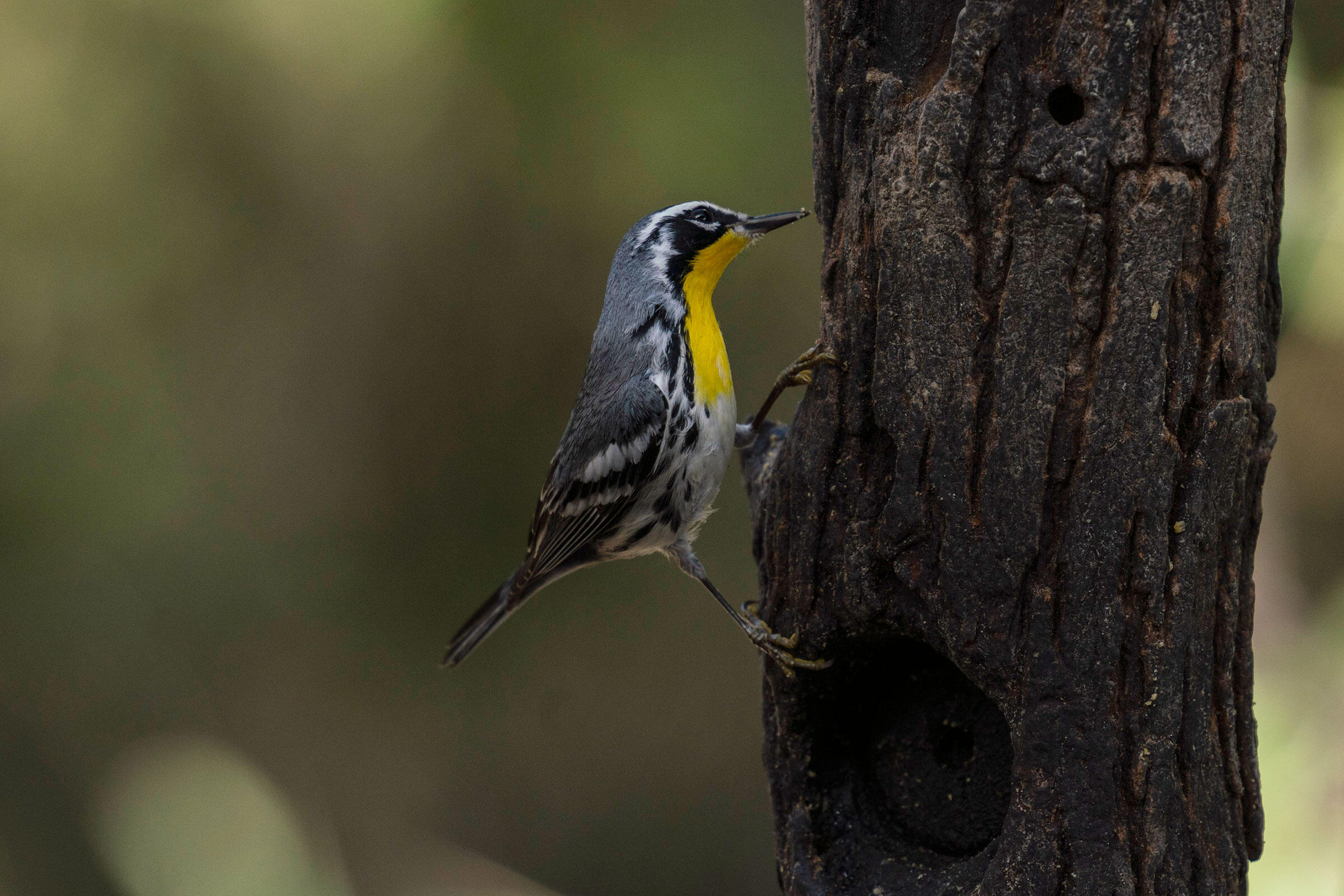 The birders spot a Yellow-throated Warbler during the Christmas Bird Count at Bentsen-Rio Grande Valley State Park. This is a rare bird found only during winter and fall at the park. Photo: Verónica G. Cárdenas

A recent sighting of a Roadside Hawk, a rare visitor to Texas, tested the relationship between birder and Border Patrol. The bird lingered in an area near Bentsen State Park inside property owned by the U.S. Fish and Wildlife Service known as the Border Patrol Stables. "People were coming from Houston, Austin, San Antonio, El Paso, and even out of state to see that one bird,” says John Ebner, a count participant who visited the hawk. He said it used to be possible to drive inside the federal property, but that's changed; the gate is often closed. Border Patrol agents, however, tolerated the visiting birders’ presence, he says.

In comment to Audubon, Border Patrol reiterated that the area is closed to the public. An agency spokesperson says the area continues being exploited by "transnational criminal organizations,” or cartels. (While cartels do participate in illegal human trafficking, the majority of drugs they transport across the border come through legal ports of entry.)

Every year a potluck marks the end of the count, and the start of roll call. The group is relaxed. Food is out. Binoculars are set aside. Rodriguez introduces Angela Rojas, a young park botanist, and congratulates her on her first count. The veteran counters echo one another, confirming the ducks, raptors, game birds, and herons they've seen.

Texas Parks and Wildlife interpreter Angela Rojas and volunteers share their findings from the Christmas Bird Count during their potluck gathering at the end of a long day. Photos: Verónica G. Cárdenas

The wall's construction—mere weeks away and just a few hundred feet from where they're sitting—shouldn't affect the integrity of the bird count, says the long-time Christmas Bird Count coordinator; this birding group has learned to adapt many times over. "We don't have to get to every single corner in that circle," he says. "Nothing is going to change the fact that the Christmas Bird Count is going to happen every year.”

It's 6:30 p.m. and the winter sun is now gone. When the tally is complete, Rodriguez counts 159 species in a span of several miles. "One more than la