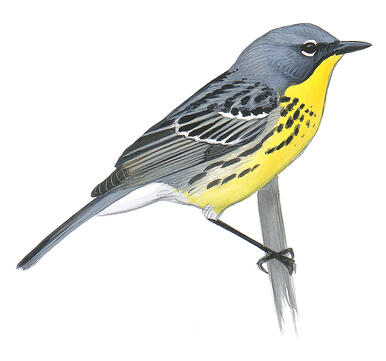 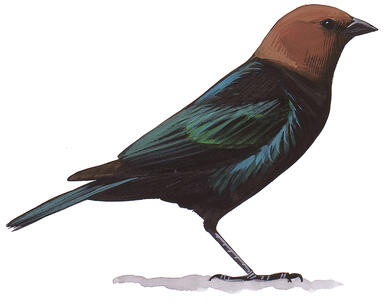 On a sunny morning this June I stopped at a rest area on I-75 near Grayling, Michigan. Outside, I snapped a photo of a state historical marker labeled, “The Return of Kirtland’s Warbler.” A fellow traveler paused on the way to her car. “Isn’t that so cool?” she asked, beaming. “Do you know about the thing with the jack pines?”

I did know about the thing with the jack pines, I told her. And I agreed that it was pretty cool—in fact, I was on my way to meet up with a group of birders to explore a patch of those scraggly trees.

The thing with the jack pines is that Kirtland’s Warblers can’t live without them. The birds nest only in large, dense stands of young jack pines, around 5 to 20 years old. The trees thrive in the dry, sandy soils of Michigan’s northern Lower Peninsula. As a result, almost the entire global population of Kirtland’s Warblers spends its breeding seasons in Michigan, my home state.

Wisconsin hosts a growing but still tiny population of Kirtland’s Warblers (as does Ontario), but no state can claim the species as part of its heritage the way Michigan can. Each June, the Kirtland’s Warbler Festival in Roscommon welcomes the birds back to jack pine country after their winter in the Bahamas. A few miles up the road, students learn nursing and graphic design at Kirtland Community College. Farther east, in Mio, a midcentury monument to Kirtland’s Warbler greets visitors at the Oscoda County Courthouse.

Michigan’s official state bird, by the way, is the American Robin.

I’ve got no problem with robins, aside from on those spring mornings when their libidinous trilling wakes me up an hour before sunrise. As an emblem for Michigan, however, the robin is a lousy pick. “A very familiar bird over most of North America,” Audubon’s field guide calls it. “Abundant and widespread.” It’s already the state bird of Connecticut and Wisconsin.

Obviously, the Kirtland’s Warbler should be Michigan’s state bird. And while I’m on my soapbox, it’s time to rename the species in the spirit of bird names for birds. The warbler’s namesake, Jared P. Kirtland, seems to have been a solid dude—he was a staunch abolitionist whose home was a stop on the Underground Railroad—but what’s he got to do with this wild creature? Charles Pease, his son-in-law, shot an unfamiliar warbler on Kirtland’s farm in 1851 and took it to another naturalist, Spencer Baird, who decided to name it for Kirtland. The species is sometimes colloquially called the jack pine warbler, a name that tells us something vital about its ecological niche. Perfect. Let’s rename it the Jack Pine Warbler.

The American Robin just doesn’t tell you much about the state, says Heather Good, executive director of Michigan Audubon, which is not affiliated with the National Audubon Society. “It doesn’t have a lot of conservation context. Whereas, if the Kirtland’s Warbler were the state bird, it would have the gravity of its story.”

That story, in short, goes like this: The entire Kirtland’s Warbler population dwindled to 167 pairs half a century ago. The main problem was that, as more people built homes and cabins in jack pine country, suppressing wildfires to protect property became standard practice. But jack pines need fire to open their resin-packed cones and release seeds, and Kirtland’s Warblers need blazes or other disturbance to regenerate the young woods where they breed. To make matters worse, Brown-headed Cowbirds moved into the region and laid their eggs in warbler nests, further eroding the population. In 1967 the federal government made the species among the first protected under a precursor to the Endangered Species Act.

What followed was one of this country’s great conservation success stories. State and federal agencies worked together to clear-cut and replant jack pine tracts, providing more and more nesting habitat. The U.S. Fish and Wildlife Service trapped cowbirds to help protect warbler nests. By 2019, Kirtland’s Warbler numbers had rebounded to more than 2,300 breeding pairs—well above the 1,000-pair recovery goal—and the government removed them from the endangered list.

It’s a hopeful tale of hard work, problem-solving, and cooperation. It’s also a reminder of our continued obligation to do right by the natural world—Kirtland’s Warbler is what’s known as a conservation-reliant species, and its numbers will plummet again if we don’t keep working to maintain its habitat.

And yet, Michigan has cast its lot with Turdus migratorius. The Michigan Legislature made the American Robin the state bird back in 1931. Their vote followed a contest two years earlier organized by the Michigan Audubon Society and open to all Michiganders. Nearly 200,000 people voted.

The result was no landslide. Only 22 percent of the votes were for the robin, with the Black-capped Chickadee a close runner-up. Even Edith Munger, the Michigan Audubon president who spearheaded the contest, appeared disappointed with the outcome, according to Detroit journalist Amy Elliott Bragg. “Despite her valiant attempts to inspire enthusiasm for birds among the people of Michigan,” she writes, “it seemed like they just picked the bird most familiar to them — one with no special significance to Michigan, or to the residents who had voted for it.”

The Kirtland’s camp has managed to get a few bills considered over the years, but to no avail.

Every few years there are rumblings about a do-over. The chickadee fans got legislation introduced back in 2000, arguing that the hardy songbird is a better symbol than the robin since it toughs out Michigan winters instead of flying south. (To be fair, many robins stick around through the cold months.) And the Kirtland’s camp has managed to get a few bills considered over the years, but to no avail.

At least one lawmaker agrees. “This is a great way that we could lift up the conservation efforts and ecotourism efforts surrounding the Kirtland's Warbler,” says State Rep. Julie Brixie, a Democrat from the suburbs of Lansing, the state capital. Her district doesn’t include Kirtland’s habitat, but she’s a birder and an environmental scientist who recognizes the bird’s significance. Plus, “They’re cute, man.”

Choosing a new state bird might not be among the Legislature’s top priorities, but Brixie says lawmakers vote all the time on issues that aren’t exactly urgent. The timing is good, she adds, because the pandemic has brought about a surge of interest in birds and birding. And while changing the state bird may be symbolic, she sees real value in it. “If an endangered species is no longer considered endangered and is not protected at the same level, then people are worried that you’ll lose ground on those efforts. To do something like categorizing it as the state bird would further raise awareness of its status and the uniqueness of the warbler here in Michigan,” she tells Audubon magazine. “I would be happy to work with somebody on it.”

Lawmakers with more jack pine in their districts ought to partner with Brixie to get it done. People travel to northern Michigan from all over the world to see a Kirtland’s Warbler, and they bring lots of cash to Grayling, Mio, and nearby communities. On my June visit I did my part to support the region’s brewers and taco vendors. After all, a celebration was in order. A friend and I had joined one of the regular tours sponsored by Michigan Audubon and the state Department of Natural Resources. It took only moments for our group of a dozen or so birders of varying experience to hear our first Kirtland’s singing. And before long we got our first look. Brixie’s right: They’re cute, man.

Soon, like a lot of Michiganders, those birds will head south for the winter. It’s an incredibly difficult, dangerous journey of around 1,500 miles. Yet, these tiny travelers will fly all the way back to our state in the spring, a blessing as distinctly ours as the Great Lakes or the Motown Sound. One day soon they should return to a proper welcome as Michigan’s official avian symbol.