John James Audubon’s Birds of America is an incredible feat—in large part thanks to how comprehensive the 435 watercolor paintings are for their era. Audubon wasn’t just working at a time when European Americans didn’t know the breadth of American birdlife…they didn’t really know the extent of America itself.  Painted during the early 1800s with little more than a rifle and some friends’ help, Audubon was able to correctly distinguish and paint (to scale!) more than 400 distinct species—more than half of our native birds.

For Audubon, every unusual song could signal a new bird, every isolated swamp or mountain range could host species no ornithologist had ever seen before. All that possibility must have been exhilarating—maddening, even. To avoid missing out, he shot heaps of birds…and compatriots exploring far-flung regions of the continent brought him heaps more. Among the messes of (dead) birds he had to sort through were weird-looking juveniles, birds with plumage anomalies, or even the occasional hybrid.

So it’s no wonder the man didn’t get everything right.  And indeed, there are several birds painted and explained in Birds of America that are not, in fact, actual species. Some are immature birds mistaken for adults of a new species (the mighty “Washington’s Eagle” was, in all likelihood, an immature Bald Eagle).  Some were female birds that didn’t look anything like their male partners (“Selby’s Flycatcher” was a female Hooded Warbler).

Others were…well, no one really knows. Audubon painted a handful of birds that aren’t an exact match for anything we’ve currently got. These are Audubon’s mystery birds.

Maybe they’re just mistaken plumages, like the eagle or the flycatcher, and we still can’t sort it out.  Maybe they were birds that Audubon just painted poorly, or from a vague memory, or from a partially decomposed corpse.

Maybe they’re species that have gone extinct since Audubon painted them. There certainly are a bunch of those, sadly, including Bachman’s Warbler, Ivory-billed Woodpecker, Passenger Pigeon, and Carolina Parakeet. It’s certainly possible that some already-range-restricted species could have been wiped out before conservationists even knew to notice.

Or maybe these birds are still out there somewhere, flitting around unseen. In any case, it’s worth taking a look. Here’s a rundown of Audubon’s mystery birds, and what the likely scenario behind each one might be.

Named for its dark cap and streaking—not, unfortunately, because it was fizzy on the tongue— Audubon painted his Carbonated Warbler from two individuals he shot in Kentucky in 1811. He himself was uncertain about its species, admitting he thought the birds were young—or as he put it, “not in full plumage, as they had no part of their dress seemingly complete.”

Field guide author David Allen Sibley took an artistic angle to bring further skepticism to the birds in a fascinating blog post from 2008 (give it a read, and don’t neglect the comments!). Sibley pointed out several structural oddities and impossibilities in Audubon’s renderings. Several feather groups were arranged incorrectly or are misshapen. The painting lacks the detail present in Audubon’s other drawings. Sibley takes these errors and imprecisions to mean that Audubon might not have been looking at actual specimens when he painted.

There may be a benign explanation for the poor quality of the painting. Audubon recounts in his Ornithological Biography that 200 of his original paintings were eaten by rats in 1812, a catastrophe that “nearly put a stop to [his] researches in ornithology.”  Audubon’s original Cerulean Warbler drawing was lost this way, so the Carbonated Warbler could have been in there as well, and perhaps he repainted it from memory of the original bird.

Another possibility, as pointed out by the writer Scott Weidensaul in the comments to the Sibley blog (I told you they were worth it), is that some of the ornithological discrepancies might be the result of later artists who engraved and colored the printing plates used to produce the final images.

Unless one of these birds is rediscovered, we’ll never know.

Best guess: Sibley didn’t name a species, because with all the errors in the painting who knows what the actual specimen looked like? But I’ll give it a shot. If the painting did have a real life model, the black cap, wing bars, and general pattern of streaking are pretty good matches for Blackpoll Warblers—except those birds are black and white, not yellow. However, there can be a lot of variation in blackpolls, including some yellow-tinged birds. I’ll take it.

As much as everyone would enjoy another adorable kinglet species in the world, Cuvier’s Kinglet hasn’t resurfaced since Audubon (supposedly) shot one in Pennsylvania in 1812 and named it after the famous French zoologist.  Even Audubon admitted the bird was very similar to Ruby-crowned and Golden-crowned Kinglets, admitting that even he didn’t know it was any different until he picked it up off the ground.

Unlike those other species, though, per Audubon’s rendering, Cuvier’s Kinglet had a dark forehead, with the dark head stripes of the golden-crowned kinglet—except with a red crown. Despite never seeing another specimen, Audubon kept up hope of the bird being rediscovered, writing other ornithologists to inquire about any odd kinglets they might have turned up. Alas, none ever has.

Best Guess: The plumage is really not that different from a Golden-crowned Kinglet, whose head feathers are often darker than their name suggests. Cuvier’s Kinglet was probably just a golden-crowned, according to the American Ornithologist’s Union. 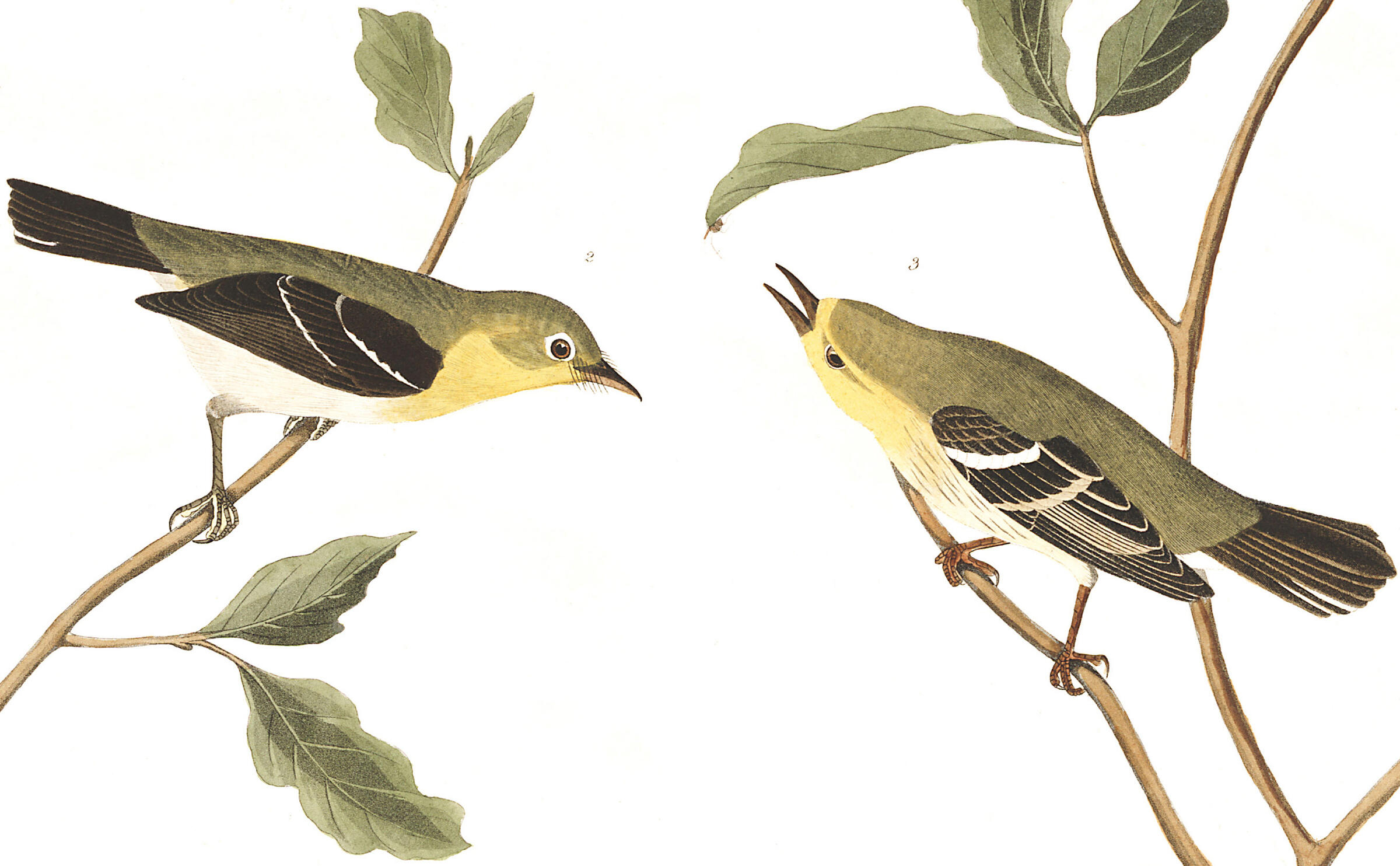 These two birds appear together with other small birds on a print that, I think it’s fair to say, does not rank with Audubon’s masterpieces.  Both birds look stiff and lack detail, and it’s possible that Audubon had neither specimen in front of him when he painted them.

Both “species” likely owe their presence in Birds of America to Audubon’s chief rival of the time, Alexander Wilson. After a brief imprisonment for writing satirical poems in his native Scotland, Wilson immigrated to America in 1794 and eventually set out to paint all the birds of his new home. He published the first volume of American Ornithology in 1808—years before Audubon’s far superior paintings were published—and continued painting until his death in 1813.

The Blue Mountain Warbler was a bird that Wilson claimed to have shot in the blue mountains of Virginia. Audubon never saw one alive, but claims to have gotten ahold of a specimen “from the Council of the Zoological Society of London, and which had come from California.” Sounds to me like Audubon was jealous that Wilson found a bird he couldn’t, but claimed he had one in the same way some people claim to have a “long-distance” girlfriend. It’s possible that Audubon had only Wilson’s painting to go off.

The story is reversed for the Small-headed Flycatcher: Audubon claims that Wilson copied it from him. Audubon painted his from a specimen he shot in Kentucky in 1808, a painting he later showed to Wilson (yeah, they were sort of frenemies). The bird showed up in later works by Wilson, who claimed he’d seen some in New Jersey, and shot one in an orchard somewhere. Audubon didn’t believe him, and regretted showing him the earlier drawing.

The trouble is, neither of these stories shed any light on just what the heck these birds actually were, if they existed. The descriptions given by the men accompanying the artwork point to a wood-warbler of some kind, but the plumages don’t match anything exactly.

Best Guess: No easy answers on these two.  The 19th century ornithologist Elliott Coues suggested the Blue Mountain Warbler was just a young Black-throated Green Warbler, or maybe—if the specimen did actually come from California—a young Townsend’s Warbler. As for the Small-headed Flycatcher, Coues doubted its existence at all, chalking it up to a misunderstanding between Wilson and Audubon, and calling the whole thing a “tissue of surmises.”  It looks like a Pine Warbler to me, but no one can say for sure.

On the same plate as the Small-headed Flycatcher and Blue Mountain Warbler is another mystery bird, Bartram's Vireo (I said it was a weird plate). Audubon claims that this bird must often be “confounded with, or mistaken for, the Red-eyed Vireo,” which makes sense because it looks exactly like one. The “remarkable” difference between Bartram’s and Red-eyed Vireos, supposedly, is that Bartram’s stays in thickets low to the ground while red-eyed sing from the treetops. Not sure I’m convinced.

This one’s a mystery that might have been recently solved. In 1833, a Pennsylvania man named John Townsend shot a bird near Philadelphia that neither he nor Audubon had ever seen. It was built like a sparrow, with a strong, conical bill, but had a white throat and gray chest unlike any known species. The men figured it was a new bird, and it was named after its discoverer.

Unlike any of the other birds on this list, though, the specimen still exists—it’s in the Museum of Natural History in Washington, D.C. Ornithologist Kenneth Parkes studied the specimen in 1985 and, also consulting with field notes from Townsend, concluded that the bunting was simply an aberrant-plumaged Dickcissel.

But in 2014, the case was reopened when images of a dead-ringer for a Townsend’s Bunting were taken in Ontario. Thanks to an alert birder with a fast shutter-finger, the whole birding world was able to get a look. When the dust had settled and all the experts weighed in, the consensus was … an aberrant-plumaged Dickcissel. Still, as only the second-known example of this plumage in history—the first one coming from Audubon himself—this was a fun moment.

Best Guess: Who am I to blow against the wind? Aberrant-plumaged Dickcissel.

These mysterious birds are well-known to any serious birder, tucked into the back of the mind in hopes of some future miraculous rediscovery. It’s one of the true joys of birding: You never quite know what you’re going to find out there. And if you do happen upon something crazy, take a quick shot—ideally with a camera, not a rifle.