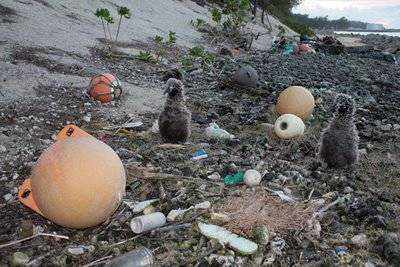 A new documentary is on its way, throwing the spotlight on a bird few Americans know outside the realms of poetry and metaphor. Directed by photographer Chris Jordan, Midway will chronicle the plight of the Laysan albatross, a seabird that is feeding its young our plastic trash.

At a distance, you might mistake the Laysan albatross for a seagull; it has the same streamlined shape, snowy white stomach and slate gray back. But a closer look reveals a bird with a thicker, sturdy beak; charcoal-black smears that resemble eye shadow; and an enormous wingspan that easily clears six feet. These birds can live up to forty years and spend months at a time gliding over the sea, dining by night on squid and fish at the ocean’s surface. When it is time to breed, more than half of Laysan albatrosses come ashore at Midway Atoll, three remote islands in the north Pacific. It is here, however, that they face their greatest danger.

Midway lies within the Great Pacific Garbage Patch, a stretch of open ocean where debris—much of it buoyant plastic detritus—collects, floating on the water’s surface and washing ashore. Albatrosses spy the plastic while seeking a meal for their chicks. The chicks gobble the plastic down until their bellies are filled to bursting with bottle caps, lighters, and scraps of unidentifiable junk. Then they starve to death—or die of poisoning or perforated stomachs.

As the chick carcasses decompose, the rainbow of plastic in their stomachs begins to emerge. Jordan has been photographing these haunting little heaps since 2009. Now he has expanded the project into a feature-length documentary that will premier later this year.

The images of these albatrosses’ predicament highlight the toxic effect our litter has even on ecosystems thousands of miles out to sea. “For me,” Jordan writes on his website, "kneeling over their carcasses is like looking into a macabre mirror. These birds reflect back an appallingly emblematic result of the collective trance of our consumerism and runaway industrial growth.”

Though the movie is not out yet, you can go view the trailer. It opens with a quote from Coleridge’s Rime of the Ancient Mariner (the inspiration for our expression about the albatross round someone’s neck), then shows us Laysan albatrosses with their chicks, which resemble speckled dust bunnies with bright, inquisitive eyes. We are introduced to the mounds of feathers, bone and plastic that were once young albatrosses, and catch glimpses of Jordan pulling junk from dead chicks’ stomachs. All of these images promise a heartbreaking documentary that is likely to become lodged in its viewers’ minds as snuggly as plastic in an albatross chick’s stomach.