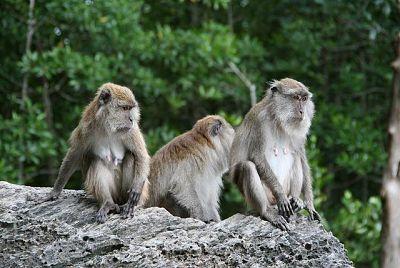 Long-tailed macaques are passing on their own diseases to humans. (Photo by Andy Lawson/CCBY-NC 2.0)

It can be tempting to think of health and the environment as two separate categories. One concerns what happens in hospitals and labs, where patients lie hooked up to blinking machines and scientists stare through microscopes at pathogens. The other concerns what happens out in the world, in felled forests and wildlife preserves.

In his engaging new book Spillover: Animal Infections and the Next Human Pandemic, environmental writer David Quammen blows any such notions out of the water.

Spillover is about infectious diseases, called zoonoses, that cross over from animals into humans. These include Ebola, SARS, and HIV, but Quammen takes readers on a tour of many other equally chilling emerging diseases. The book’s central question is, “What’s next?”

Quammen doesn’t just look at what pathogens are cropping up. He also looks at why they’re emerging or re-emerging. He argues—convincingly—that environmental degradation we humans have caused is driving the emergence of deadly pathogens.

“We should appreciate that these recent outbreaks of new zoonotic diseases, as well as the recurrence and spread of old ones, are part of a larger pattern, and that humanity is responsible for generating that pattern,” Quammen writes.

Take the deadly Nipah virus, which first swept through Malaysia in 1998, infecting at least 283 people and killing 109. Bats carry the disease in the wild, and it usually does not infect humans. However, deforestation pushed infected bats toward the edge of their habitat.

They began to hang around at pig farms, where there were abundant fruit trees. The flying mammals munched on water apples and mangoes, dropping virus-covered pulp down to the hungry pigs.

Once a pig got sick, scientists hypothesize, the virus spread like wildfire through the other pigs on the farm and on other farms. The virus went on to infect human caretakers, who infected other humans.

Similar scenarios show up throughout the book in alarming repetition. Deforestation in Borneo has brought macaques and the mosquitoes that feed on them close to rural farmers, who have increasingly contracted a new form of malaria.

Herpes B-carrying macaques in Southeast Asia frequent religious shrines located in some of the remaining patches of forest in many areas. So far they don’t seem to have passed the virus on to humans, but there’s reason for concern: In labs, workers bitten by infected animals have died.

Logging, farming, and the wild animal trade in Africa have eaten into jungles, exposing and increasing the risk that a person will contract Ebola or some other virus from a sick animal. SARS likely spread through giant meat markets, where rare wild species were being sold in China as delicacies.

Outbreaks haven’t been limited to the developing world. A switch to factory-style goat farming in the Netherlands helped spark an epidemic of Q fever, carried on the wind from crowded barns to nearby villages. Loss of biodiversity in the northeastern United States has allowed mice to multiply prodigiously, increasing the density of Lyme disease-carrying ticks.

New diseases don’t come out of deep jungles and remote forests on their own, Quammen writes. A combination of chance and our own actions brings them on. As ecosystems and animals suffer, we often do too. “People and gorillas, horses and duikers and pigs, monkeys and chimps and bats and viruses,” he writes. “We’re all in this together.”