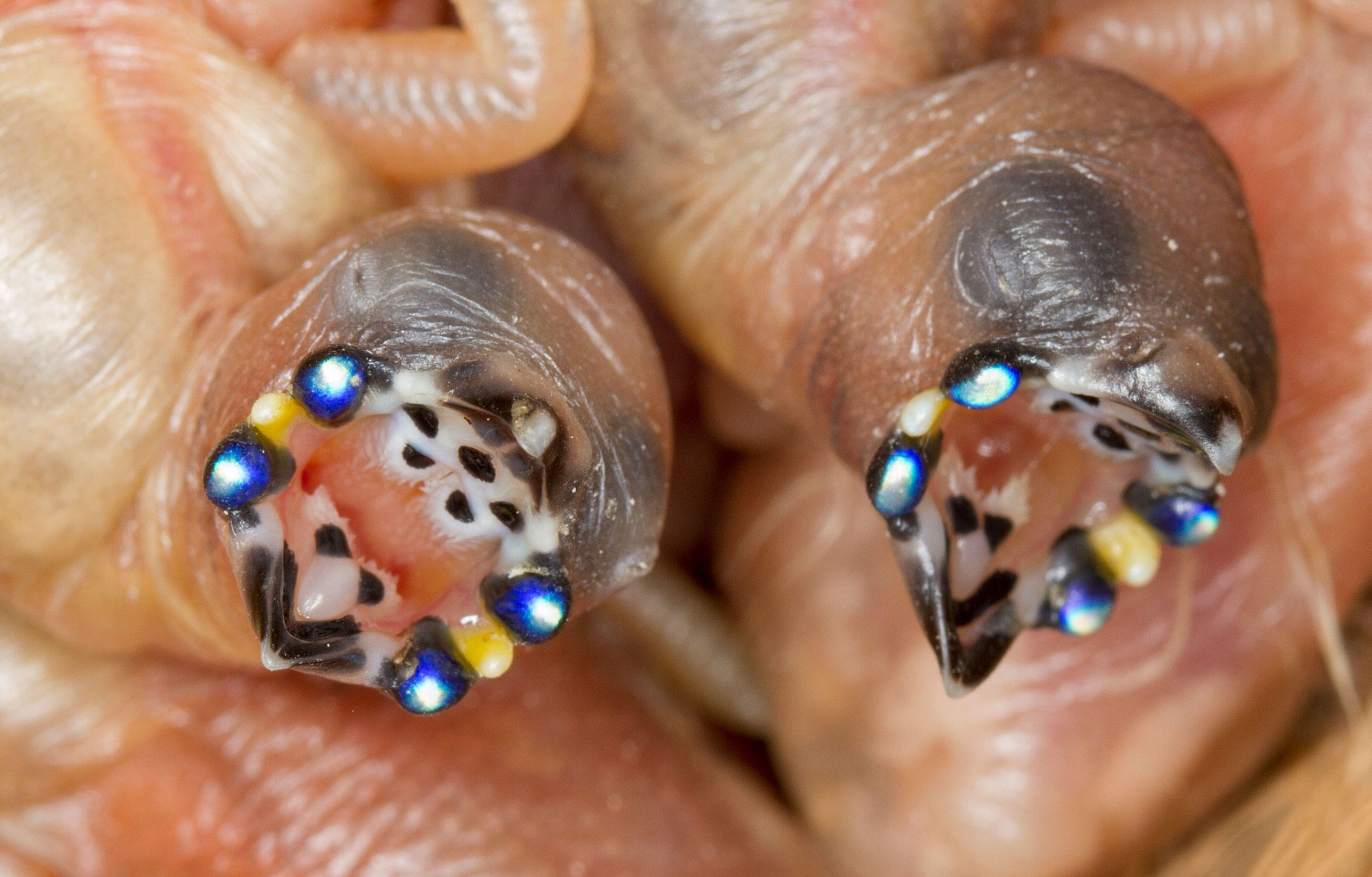 Peer into the mouth of a hungry African Silverbill, Gouldian Finch, or other Estrildid finch chick, and you’ll see something unexpected, intriguing, and maybe even a little unsettling: strange mouth markings. These marks—such as beaks rimmed with a black lining or glow-in-the-dark beads, and mouth roofs covered in trypophobia-inducing holes—are so disturbing to some that they've inspired comparisons to aliens.

But Estrildid finches are most definitely of this planet. Also sometimes called grass finches, this family of small birds can be found in Africa, Australia, and Asia, and the young of some species sport these unique mouth, or gape, markings. But why such elaborate patterns exist has been hard for scientists to pin down.

At the heart of the debate has been the brood parasites that plague certain Estrildid finch species. Brood parasites are a special kind of insidious: They lay their eggs in other birds' nests and leave the parenting duties to the unwitting host parents—often to the detriment of the other nestlings. But the chicks of birds that parasitize Estrildid finches have an extra advantage: The young of some of these nest invaders have similar mouth markings to the host chicks', possibly aiding a foreign chick's ability to compete for resources.

So the big evolutionary question is which came first: the markings of Estrildids or the brood parasites that plague them?

If the parasites came first, it could be that Estrildid finches evolved the markings as a defensive strategy, so parents can identify their own brood, says University of Illinois ornithologist Mark Hauber. The markings, then, would have helped finch parents reject the drop-ins and know their own chicks. Of course, evolution never stands still, so the parasite birds might have then evolved to mimic the markings, too.

But there’s one problem with this explanation. Some members of the Estrildid family don’t get brood parasites at all, and they still have the unusual mouth markings.

“Many grass finches in Africa are hosts to brood-parasitic species but those in Asia and Australasia are not (and likely never have been),” Gabriel Jamie, a University of Cambridge researcher who studies the evolution of these mouth markings, wrote in an email. “Despite this, many Asian and Australasian grass finches, such as the Gouldian Finch, show elaborate mouth markings.”

That could be explained away if the markings of the unaffected finches are a "ghost” of evolutionary history, Hauber says. In the past, these finches may have once dealt with brood parasites, but now for some reason, they don’t.

The markings might help parents judge the health and age of their chicks.

But more likely, he says, is the opposite scenario: Estrildids evolved the markings first. "What we think is that first came the beak patterns of the host and then the parasite came along and started mimicking the host patterns themselves," Hauber says.  "The question, of course, is what's the function of the host gape [patterns] in the first place?"

There are a few possiblities on that front, too. One is that the markings might help Estrildid parents judge the health and age of their chicks, says Hauber. An unhealthy chick will have duller and less obvious mouth patterns than a healthy one. And because a chick's body size doubles every few days, the patterns grow larger, more spaced apart, and faded as the birds mature, allowing the parents to gauge each bird's progress. By the time the chicks fledge, the markings are much less noticeable.

Another is that the markings may help parents find their chicks in a dark nest. Claudia Mettke-Hoffmann, an animal behavior researcher at Liverpool John Moores University, says, for instance, that the glowing bumps outside of the beak in Gouldian Finches reflect light, possibly serving as a built-in beacon. Australian National University researcher Cassandra Taylor says the reflective quality of markings may help parents hone in on their chicks' mouths, "like little runways" guiding a plane down a dark path.

Research supports this idea. In a 2005 study, Cornell University scientist Justin Schuetz actually changed mouth markings of nestling grass finches by painting over a white spot with black. He showed that altered chicks were fed less than unpainted ones, but they weren’t kicked out of the nest by their parents. This could mean that the markings help stimulate parents to feed their young, says Jamie. Parasite chicks would have had to develop very similar markings if they also wanted to get fed.

Hauber says the next steps in trying to unravel these questions is studying how mouth markings differ in finches that have parasites and those that don’t. In any scenario, he says, the patterns are "way too conspicuous" to not have some kind of function, whether it is signaling chick species, age, health, location in the nest, or some other factor.

He’s studied these creatures for more than a decade and is still perplexed by the chicks’ mouths, as well as by their unusual begging behaviors, which he says makes them look like swaying snakes. Though the exact reasons for their markings remain unknown, at least one thing is for certain, he says: These birds are “weird, to say the least.”

On Colorado’s grasslands, Rachel Hopper skillfully captures the beauty and brutality of this fierce songbird’s distinctive style of food storage.

These tales and pics from the nest will fill you with wonder and dread.