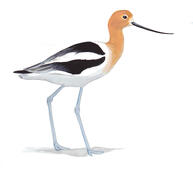 There’s a storybook quality to John James Audubon’s work that intrigues illustrator Phil Wheeler. Birds interact with each other, and with their environment, like a narrative unfolding. “They’re scientific,” he says, and yet “they’re very alive.”

Wheeler pored over Audubon’s paintings—“I had a real problem choosing one,” he says—before picking the American Avocet for its gangly charm. “They’re so awkward, but at the same time quite elegant.” With its purposeful pose and rusty coloring, his rendition honors the original: Head down, the spindly-billed wader sweeps its surroundings for aquatic morsels.

Avocets use a variety of foraging methods to feed on small crustaceans, fish, insects, and seeds from shallow fresh and saltwater wetlands. As Audubon observed, “They search for food precisely in the manner of the Roseate Spoonbill, moving their heads to and fro sideways, while their bill is passing through the soft mud.” Other times, they’ll plunge their entire head under water, or snatch a bug on the fly. Zoom in on Audubon’s landscape, and an oblong, blackish speck on the mud becomes an arthropod about to meet its fate.

Through stylized vegetation and crepuscular light, Wheeler transforms that waterside setting into otherworldly terrain. “The detail in the background is, for me, almost as fascinating as the birds,” he says. Stipples and stripes are common motifs in his art, created in Photoshop. Some patterns stem from photographs and other images that he magnifies to produce a pixelated effect. Others derive from a program he uses to generate infinitely complex patterns called fractals. Even snippets of 19th-century etchings designed by French printmaker Gustave Doré for Dante’s Inferno have lent texture to his compositions.

While his professional illustrations span genres, Wheeler’s personal portfolio skews floral and faunal, suggesting a deep regard for this planet. His home in Cádiz, an isthmus in southern Spain, is a fitting backdrop for such work. “You don’t have to try hard to get out into nature,” he says. The marismas, or coastal saltmarshes, surrounding the city support various waterbirds, including the American Avocet’s pied cousin.