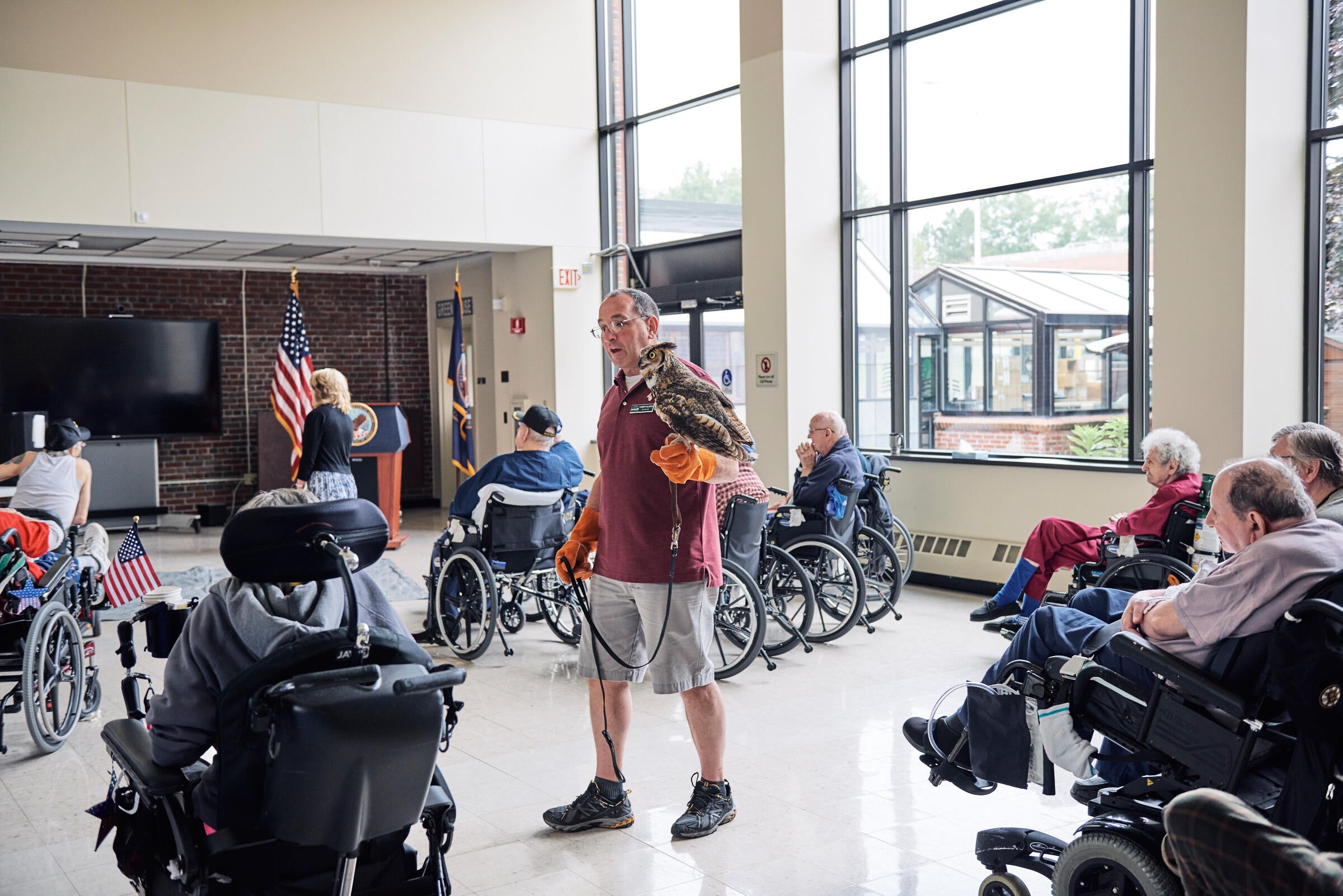 Robert Vallières brings a raptor when he speaks to veterans about how birds helped his recovery, like here at the Manchester VA Medical Center in New Hampshire. When asked the worth of this Great Horned Owl, he told the vet: “I can’t put a value on it.” Photo: Tony Luong

After the Persian Gulf War, Robert Vallières grappled with aneurysms, PTSD, and more. Birds are the ones that brought him back.

By Purbita Saha and Tony Luong

By Purbita Saha and Tony Luong

The first bird that saved Robert Vallières was a Black Hawk helicopter. It was October 1990, and the then 28-year-old Army soldier was serving in the Persian Gulf War. While riding in the back of a truck on a mission to fortify a foxhole in the remote Arabian Desert, a heavy beam slammed into him, sending him flying and causing severe head injuries and swelling in the brain. The chopper sped Vallières to a field hospital for emergency care. He was later taken to the U.S. Navy Ship Comfort, where he was stabilized, and then transferred to the Walter Reed Army Medical Center in Washington, D.C., to undergo heart and arterial surgery.

After being honorably discharged, Vallières returned to Concord, New Hampshire. While he appeared to be on the mend, he continued to grapple with chest spasms and Gulf War Syndrome—the mysterious mix of symptoms, including headaches, exhaustion, and memory problems, that plagued up to a third of returning veterans. On top of that, he had lingering effects from a pre-deployment aneurysm, and was diagnosed with post-traumatic stress disorder (PTSD), a condition that experts estimate afflicts about two million members of the military. The PTSD led to serious depression and horrific anger, he says. He was overwhelmed with trying to readapt to civilian life when he saw a newspaper ad for a birding trip in the White Mountains. Remembering his hikes with his nature-loving father, also a veteran, Vallières signed up immediately. Up on the slopes, as he scanned the leafy ledges for passerines, a Peregrine Falcon hurtled into view, seizing a Northern Flicker mid-air in a puff of feathers. He followed it back to a snag, where it tore the woodpecker apart, yellow shaft after yellow shaft. “I was glued,” Vallières says. “I had just come back from war.”

Vallières credits that Peregrine with saving him from despair. The encounter sparked a full-fledged birding obsession that ultimately helped shape his philosophy on healing. He quickly signed on to monitor raptor nests with New Hampshire Audubon. The first site he claimed was Joe English Hill, near Concord, where he and his son Andrew would watch American Kestrels speed rodents to their begging chicks' mouths. As his identification and observational skills deepened, his responsibilities multiplied. He began tracking breeding Peregrine Falcons and Bald Eagles, aiding in the recognition of an uptick in chicks that confirms the birds' nationwide resurgence since the pesticide DDT was banned.

Vallières finds strength and hope in their comeback. “They keep my defeats in perspective,” he says. And, he discovered, while painkillers reduced his chronic pain, his ailments often temporarily vanished in the presence of birds. Besides taking his mind off the hurt, tracking wild birds also allowed Vallières to beat back depression and regain much of his physical strength. Most mornings he'd be up early, hiking along a train line to check on a female eagle he once tagged, or kayaking across a lake to look for new hatchlings. After volunteering with New Hampshire Audubon for a few seasons, he felt he could do more. He began rehabilitating raptors, first with Audubon, then with the local wildlife hospital Wings of Dawn, where he learned to train unreleasable birds as educational ambassadors. Working with the feathered charges allowed him to pay forward the care and kindness he'd received from doctors, nurses, and therapists, he says. It also made him feel like less of a burden.

Given the profoundly soothing effect raptors had on Vallières, he was motivated to share the experience. He brought other vets to the New Hampshire Audubon hawkwatch platform to take in thousands of Broad-wingeds during fall migration. He cowrote a memoir, Wounded Warriors, about his experiences in battle and birding. And he started bringing rehab birds to the New Hampshire Veterans Home and Manchester VA Medical Center. (Vallières is a patient at the latter, receiving therapy for his chronic pain, taking drawing lessons to relieve stress, and learning cognitive exercises to combat memory loss from a second aneurysm in 2012.)

On the Friday before Memorial Day, Vallières made his rounds at both facilities. In the solarium of the medical center that morning he saluted each of the 15 seniors, many in wheelchairs and Vietnam and Korean War caps. Then he introduced a male Great Horned Owl that is permanently grounded due to a wing injury. Vallières walked around with the raptor on his arm, lifting it above the veterans' heads so they could feel the rush of its beating feathers. The room buzzed with questions and anecdotes of pet cockatoos; placid faces broke into grins. With his audience transfixed, Vallières related his story. He showed them sketches he has drawn of being airlifted out of Kuwait, shared dark reflections of his struggle with PTSD, and explained the important role that birds have played in his recovery. 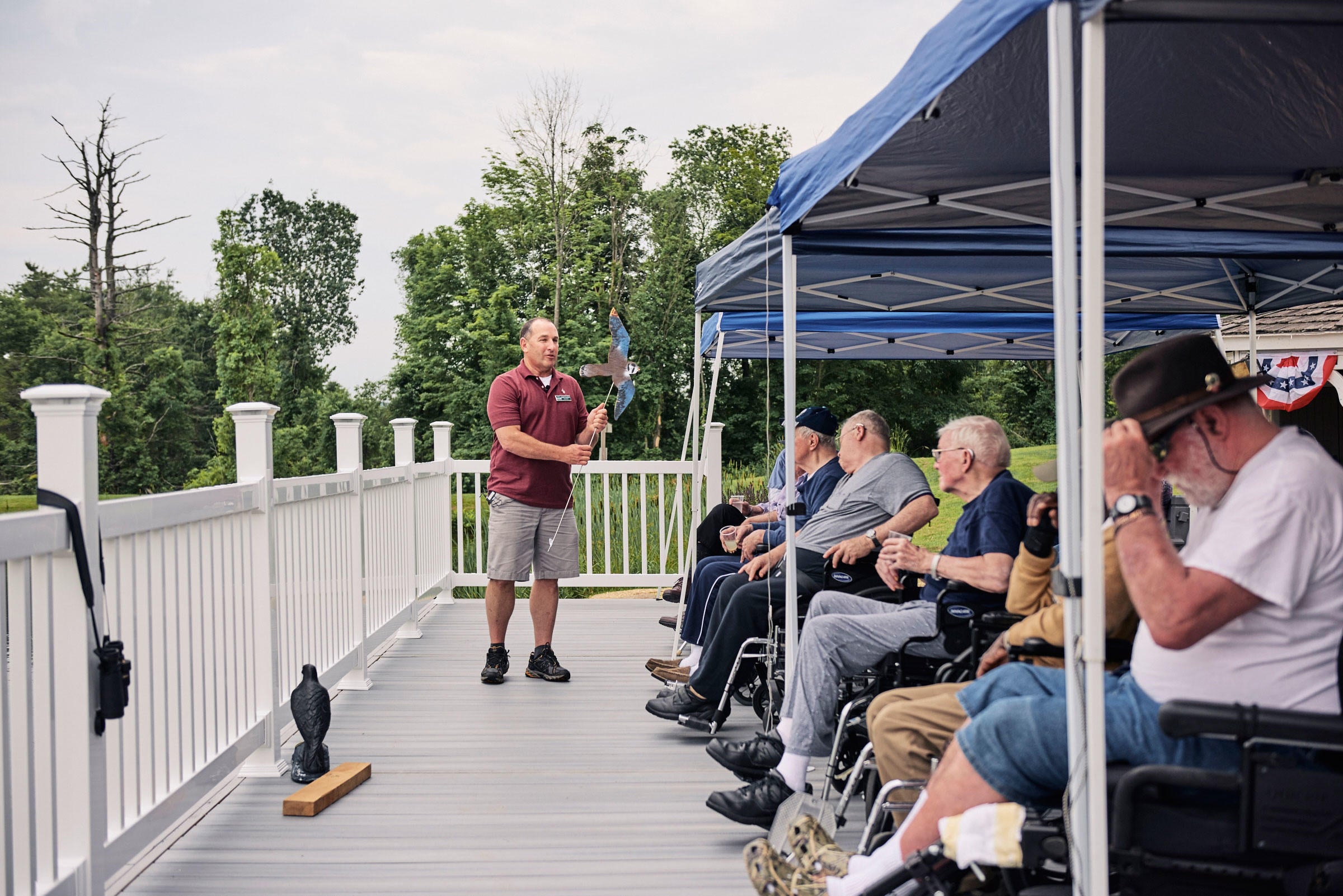 His openness is remarkable, says Laura Shannon, the recreational therapist at Manchester VA Medical Center. “It's not always cool in military culture to show your weakness,” she says. “But Robert enables others” by baring his struggles. Exposure to birds and other wildlife can be an invaluable part of the healing process, especially when it comes to members of the military, says Stephanie Westlund, a post-conflict recovery expert and author. “Intimate contact with nature, as well as social contact with other veterans, help to imbue life with new or remembered meaning,” Westlund adds.

That was certainly the case for at least one attendee at the afternoon session in the vet home. P.J. Audett recalled how, after serving during the Vietnam War, he built hundreds of Wood Duck nesting boxes around New Hampshire to bolster populations for conservation and hunting. “Robert's talks bring me back to that peaceful life,” he says. “I wish there were more programs like his.”

Vallières is well aware that the nation's 168 medical centers for veterans have long been underfunded and understaffed. He's hopeful that his visits make at least a small difference for some seeking treatment. “These people are stuck in this alleyway created by the country,” Vallières says. “They need a moment to get away from their problems and their pain.” He knows because he does, too. Whenever the toll on his body and mind weighs heavy, he picks up his binoculars and steps into his yard, seeking the comfort and company of the birds that call it home.

From left to right: A welding glove used to handle raptors; a wooden carving Vallières made of an American Kestrel; a Peregrine Falcon flight feather. Photos: Tony Luong

Tools of the Trade

Those four-inch Great Horned Owl talons are no joke; even with a protective layer on, Vallières can feel the claws digging into his skin. He always wears a cowhide welding glove to minimize contact with the raptors. Suede, he notes, is better than leather (the preferred choice among falconers) because it’s easier to grip. Above all, the gauntlet needs to be immaculate: A clean glove is a sign of respect to the bird, Vallières says.

The American Kestrel is the first bird Vallières taught his son, who mans a fishing boat in Alaska, to ID. The bird’s plumage fascinated the veteran—with the eye-like spots on the back of the head—so he decided to carve a life-size replica out of wood. “A bird flies into your life, even for a little while, but the color may stick with you,” Vallières says. He painted female features on this side of the facade (note the lack of blue in the face) and male features on the other side. Then he attached it to a trembling wire to mimic how the little falcon never sits still.

When Vallières monitors a falcon or eagle nest, he doesn’t just hang out behind his scope. “I play bird detective and go looking for prey remains” and other clues, he says. He found this Peregrine feather in the White Mountains under a “plucking tree,” which is where the falcons preen and get spiffy. Judging by its shape and slate-gray hue, the quill likely came off the wing of an adult. Collecting falcon feathers is illegal under the Migratory Bird Treaty Act, but Vallières got permission to keep this one after it was analyzed by biologists.

From left to right: a colored-pencil sketch of a kestrel by Vallières, an ankle band for a male Peregrine; a new pair of 10x50 Nikon binoculars. Photos: Tony Luong

While Vallières is hopeful about the resurgence of Bald Eagles and Peregrines, he worries about the American Kestrel’s plight. Are insecticides hurting their populations? His backyard serves as a miniature laboratory: He’s hosted a nesting family of kestrels for the last nine summers. Vallières likes to sit outside and watch them wage war on the Blue Jays. And in the rare moments when the falcons perch on a snag, he pulls out his pencils and starts drawing. “That’s when I don’t think about being a disabled veteran,” he says.

This band came from the ankle of a dead Peregrine that was nesting in the skyscraper next to Vallières’s VA center. He was there when scientists tagged the falcon. He was also there when they collected its corpse after it crashed into a window. The band itself reveals a lot about the bird’s story; “It’s kind of like a birth certificate,” Vallières says. The size is custom-made for male Peregrines (females get larger bands to fit their big talons), while the black over green shows that the falcon belonged in southern New Hampshire.

It takes some good glass to read the tiny letters and numbers on a bird band from a distance. With his binoculars, Vallières feels like he has raptor-like vision. “Hawks can see a dime from more than a thousand feet away!” he says. He also uses his Nikons to spy on visitors around his home. One of his favorite memories is watching a yellow-shafted Northern Flicker devour an ant colony—its elegant beak stabbing the ground, red nape flashing through the trees. The woodpecker reminds Vallières of Roger Tory Peterson, one of his birding heroes.