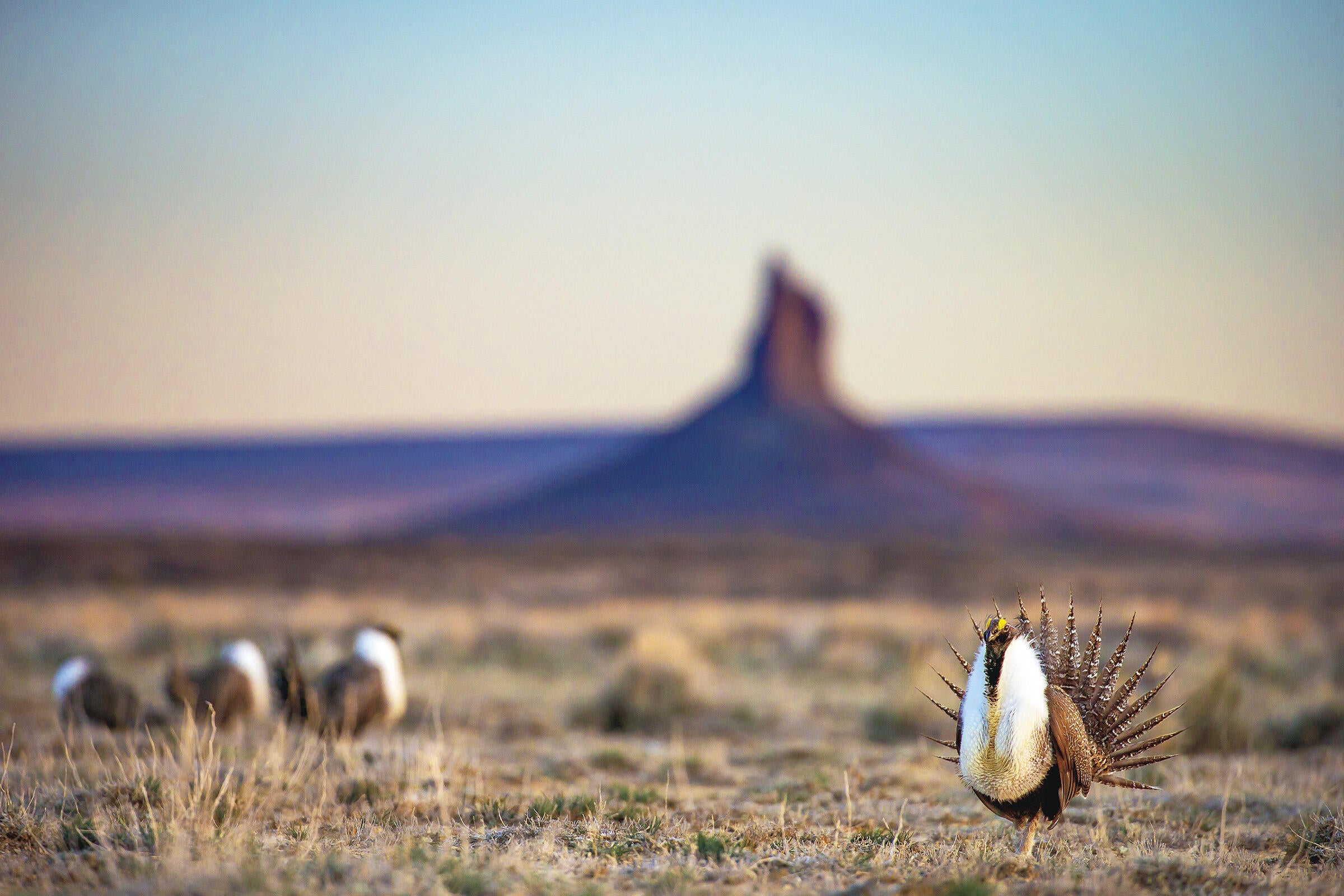 Greater Sage-Grouse are one of many sagebrush obligate species that depend on the vegetation and its associated habitat for existence. Photo: Noppadol Paothong

By Noppadol Paothong and Alisa Opar

By Noppadol Paothong and Alisa Opar

For five years the photographer Noppadol Paothong traveled around the West, documenting the life cycle of the Greater Sage-Grouse. Already working a full-time job as a staff wildlife photographer for Missouri Conservationist magazine, Paothong squeezed in weekend trips and used his vacation time to seek out the chubby, chicken-like bird in every season. His new book, Sage Grouse: Icon of the West, features intimate portraits of the birds and striking photos of the vast sagebrush landscape where they live—and where unprecedented conservation efforts are underway to prevent the species from sliding toward extinction.

Paothong coordinated with an array of landowners to photograph the birds across their range. Many of them have implemented grouse-friendly practices on their land, such as removing invasive vegetation and altering grazing practices, as part of an enormous effort to keep the bird off the endangered species list. It worked, and in 2015 the government released sweeping land-use plans that protect critical grouse habitat while still allowing development. But this summer the Trump administration recommended changes to the plans, including allowing states more flexibility over energy development and de-prioritizing habitat protection.

Paothong hopes his images will help deepen the discussion about conservation. “I want to show people that there's more than just this bird,” he says. “Protect it, and you protect hundreds of other species, as well as the heritage of the West.” 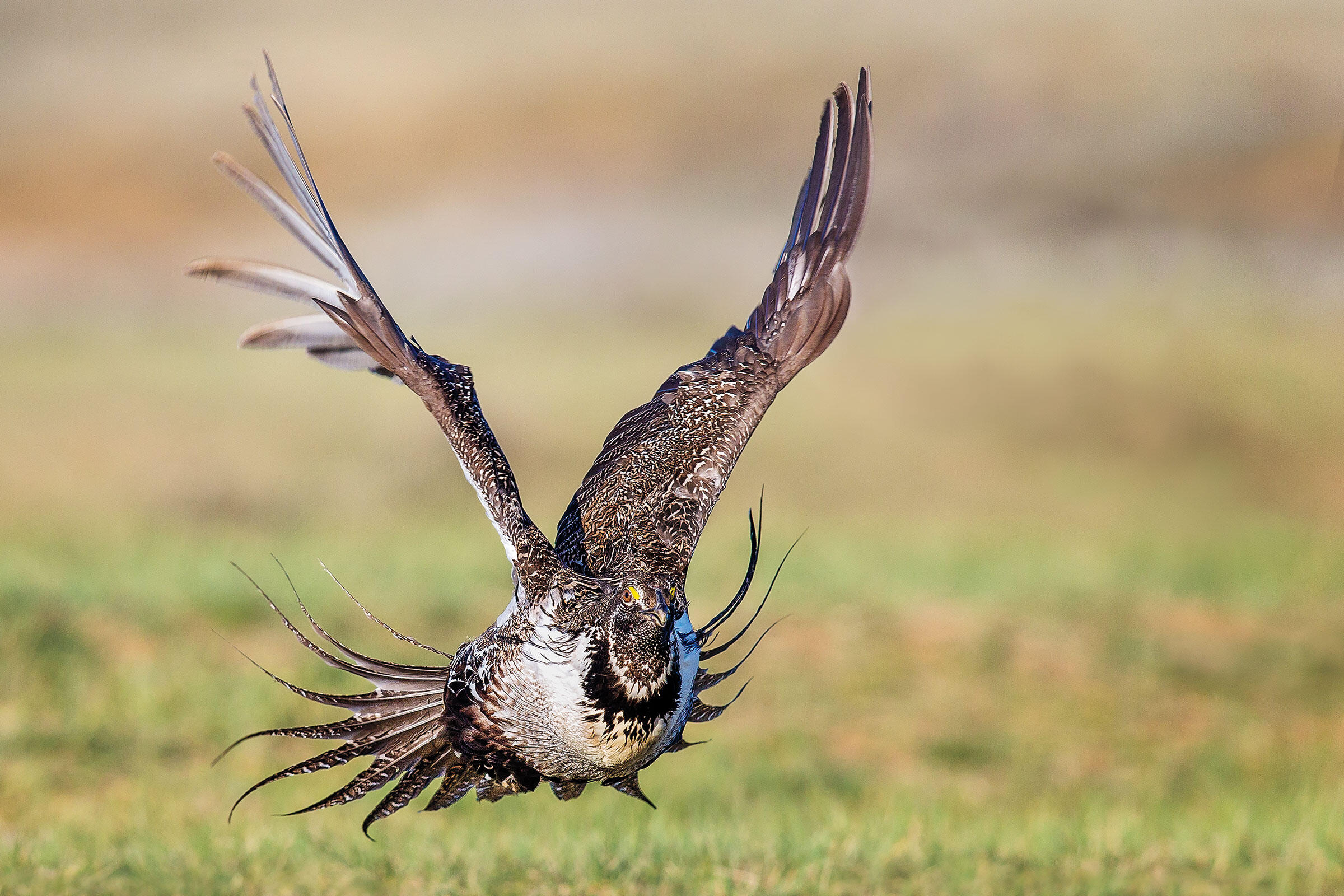 Don't let those fanciful tail feathers deceive you. Greater Sage-Grouse are powerful flyers, capable of 50-mile-an-hour bursts that give them a fair chance at escaping the clutches of Golden Eagles and other predators. Yet their wings offer little defense against an unnatural foe, the barbed-wire fencing that cuts across much of their habitat: They can't see the fine wires and frequently become entangled in the barbs, with deadly consequences. 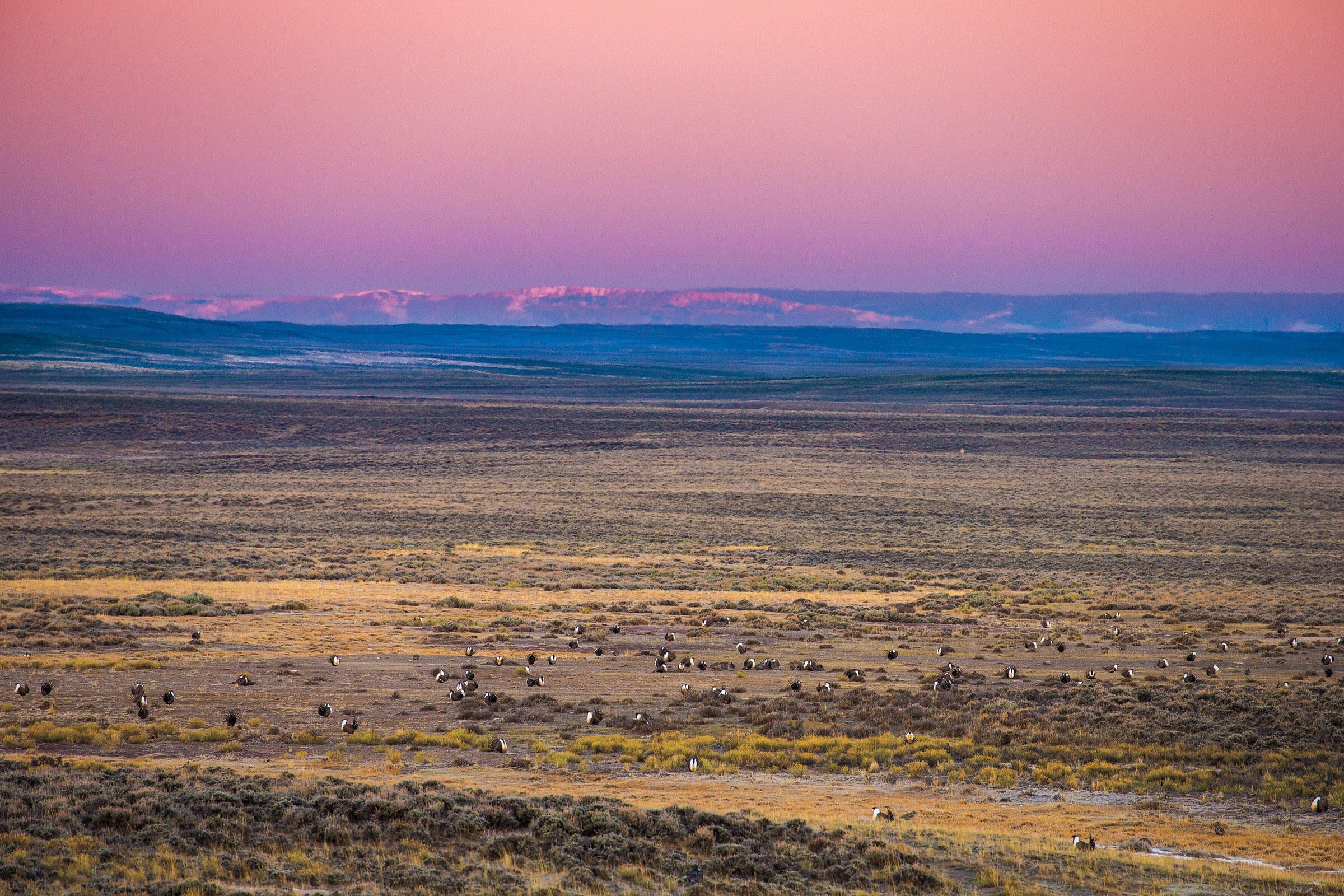 Paothong first photographed sage-grouse 13 years ago for a different project. When he started shooting them again for his new book, he discovered that the birds had disappeared from some of the places where he'd previously seen them, due to habitat loss and development. “It's heartbreaking,” he says. So he kept his hopes in check when a friend took him to this site in Wyoming. As the sky lightened he heard the familiar popping noise males make to attract mates, and looked down to find far more birds than he had ever seen gathered in a single place before. "This is what it felt like for early pioneers," he recalls thinking. “It gave me goose bumps. My photo doesn't do justice to the number of birds spread across the valley.” 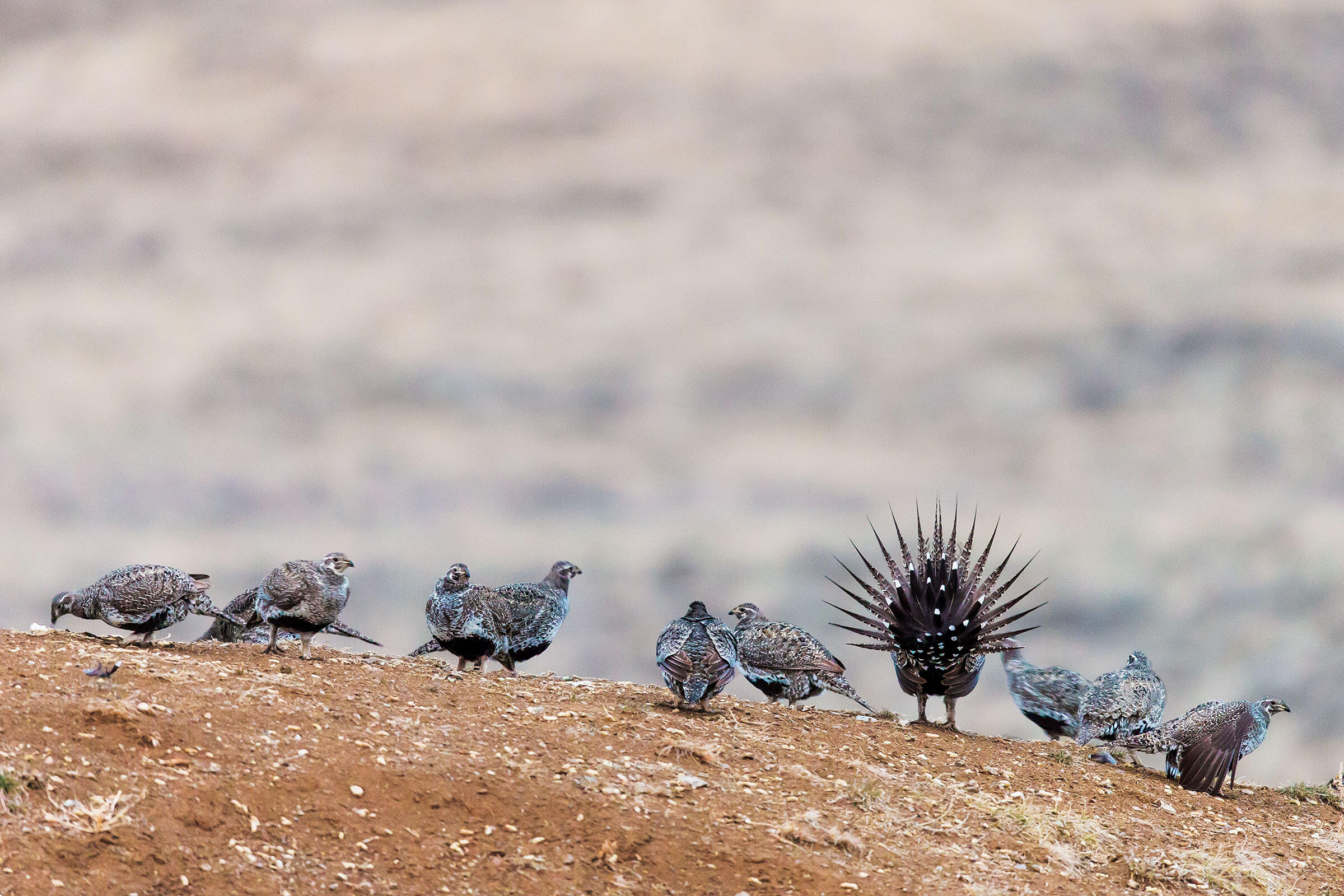 Females gather around a male on a lek, where grouse perform their mating rituals. “The thing about this bird is that it’s easy to photograph them in the springtime,” when they gather at leks, Paothong says. Seeking them out in the summer and winter required a lot more effort. “There was a lot of driving and a lot of waiting,” he says. Sometimes a landowner would call him to let him know he’d come across a bird on their property, and he’d spring into action, hoping to find the bird. “I remember leaving home at midnight,” says Paothong, who lives in Missouri, “trying to get to remote places in Wyoming in time.” 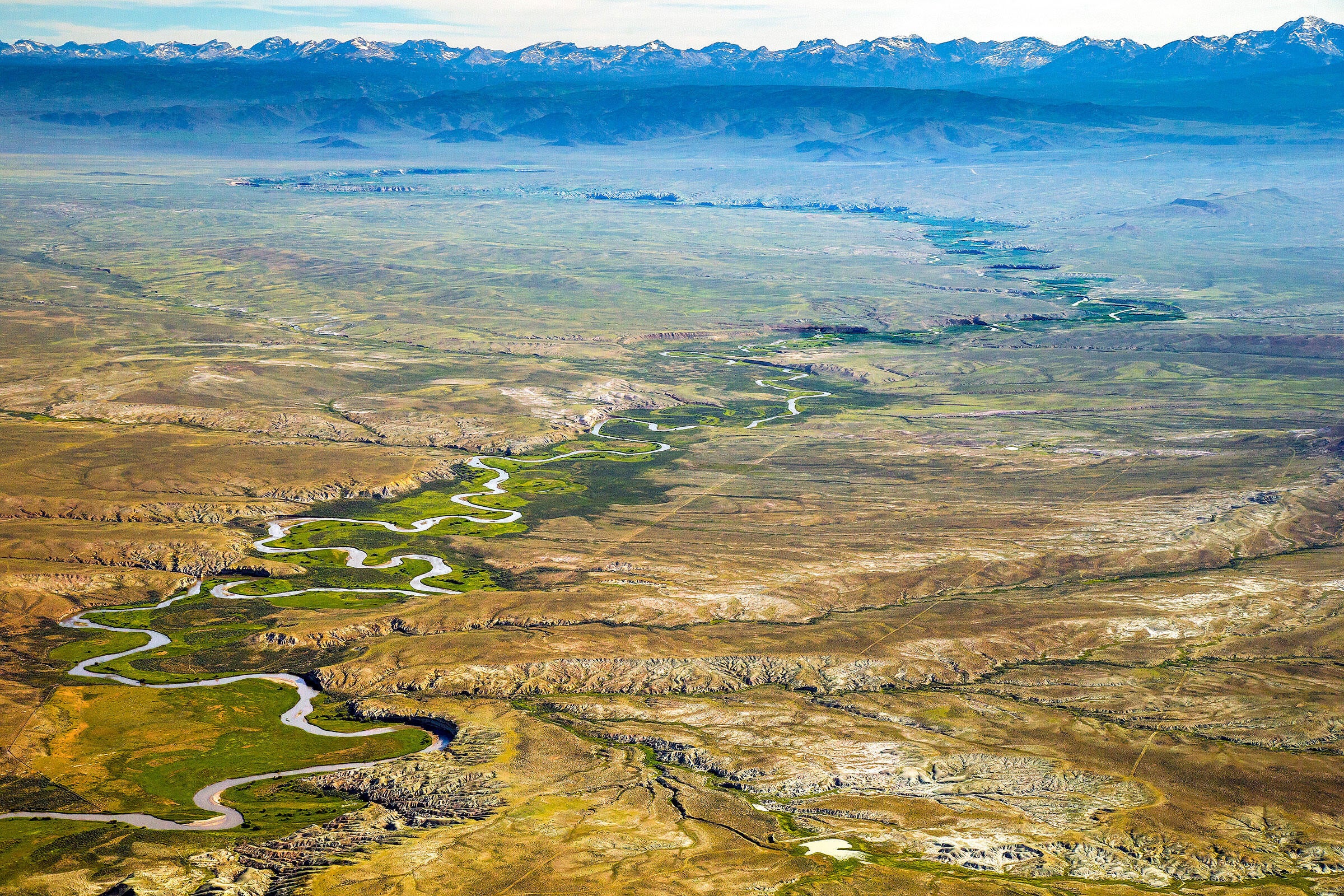 At Home on the Range

Early settlers and gold-rush prospectors found the rugged terrain of the Sagebrush Sea challenging, if not downright inhospitable. Sage-grouse, who have lived on this landscape far longer, have adapted to harsh conditions. In winter, when the insects and other plants that the birds feed on are scarce or absent, they may subsist entirely on sagebrush leaves. Sagebrush’s pungent odor comes from monoturpenoids, chemicals that are toxic in high concentrations to most grazers, but which sage-grouse, pronghorn, pygmy rabbits, and a few other sagebrush-dwellers have evolved to stomach. 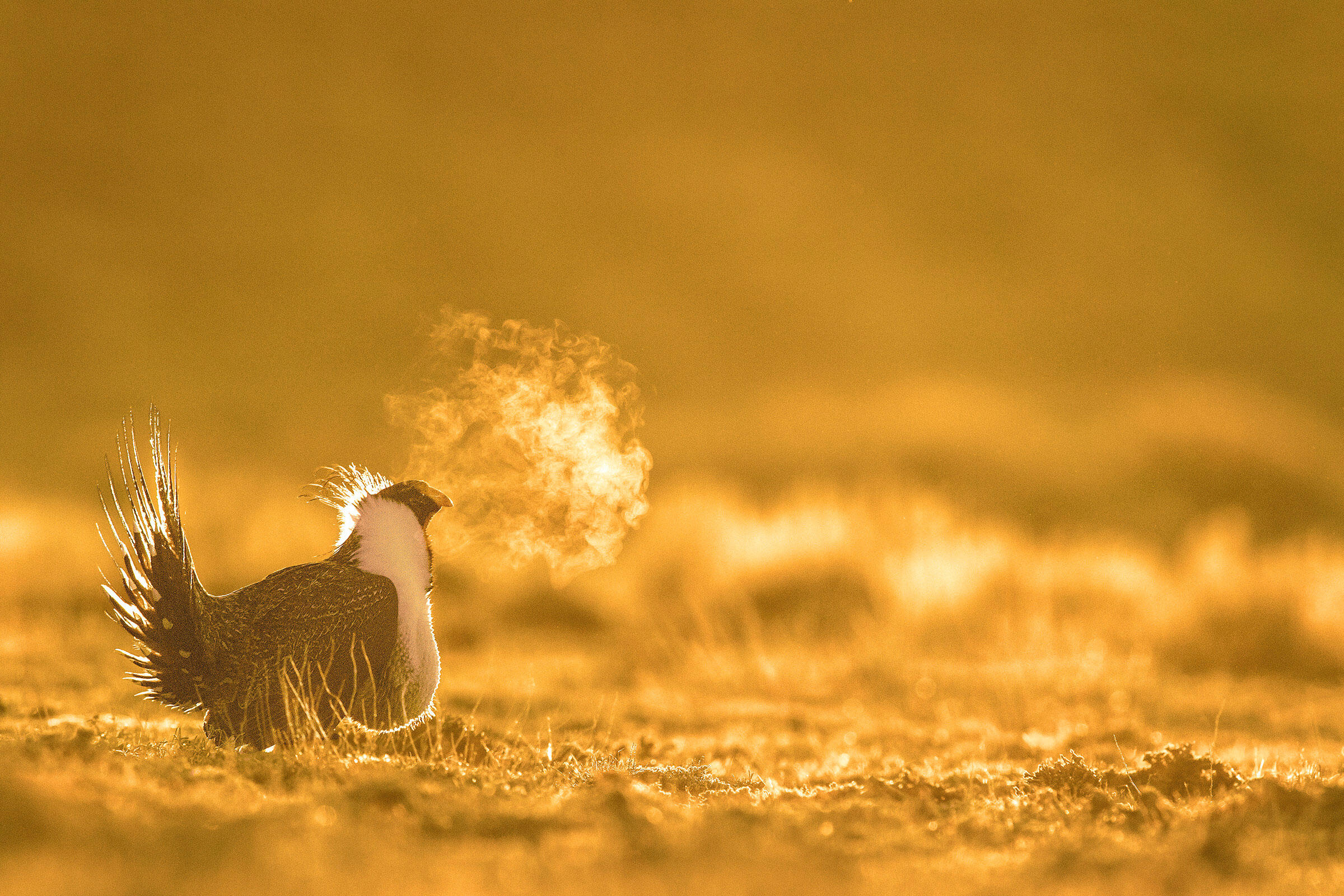 A male sage-grouse and his breath appear to glow as the morning sun lights the stage where he performs his mating dance. Males stake out territories on the display ground, sparring for center stage near the center of the lek, the area from which females typically choose their mate. A bird’s age, size, stamina, and the vigor of his strut all play a role in establishing male dominance. 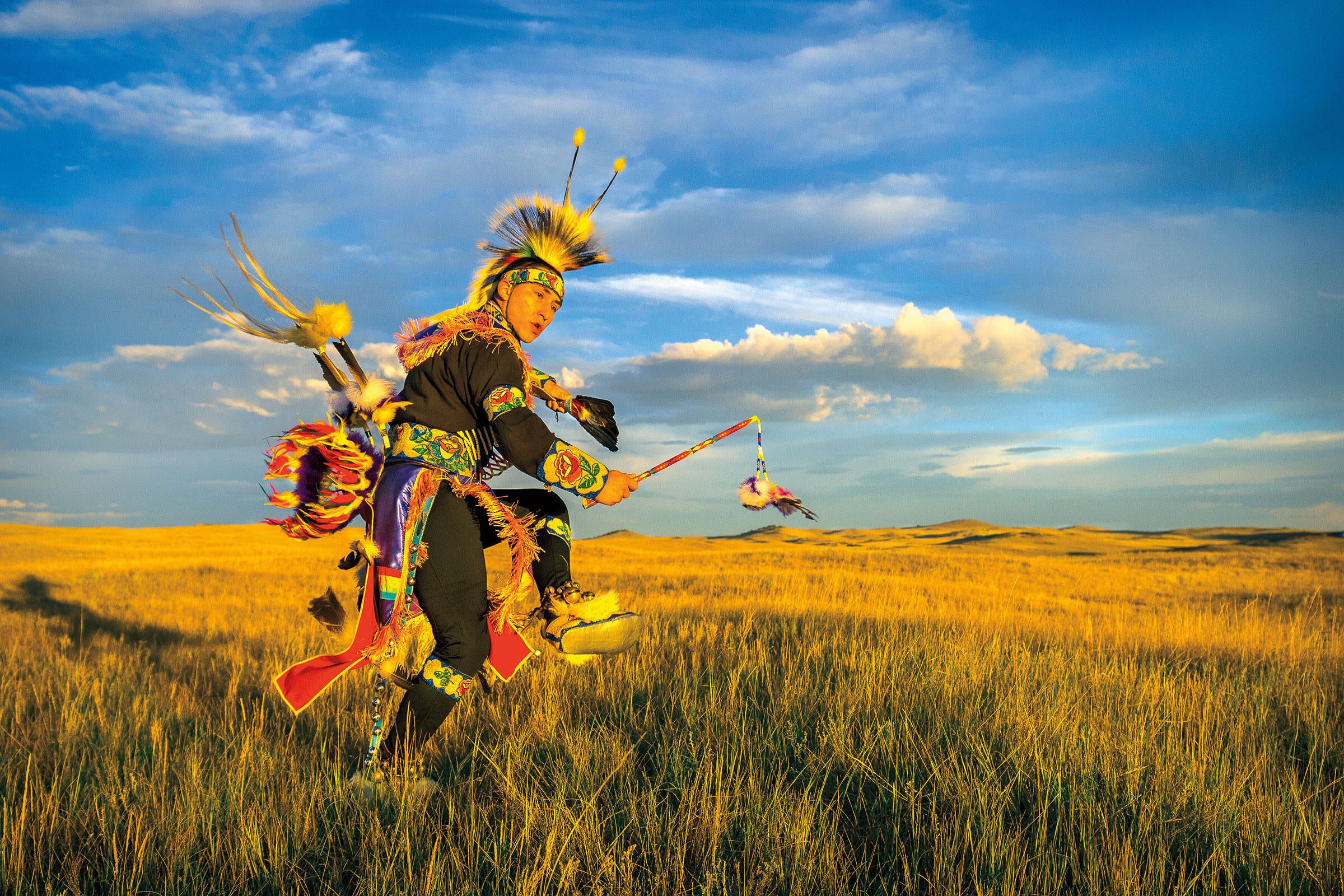 Some Native Americans relied on sage-grouse as a food source and incorporated the bird into traditional dances. Levon Big Knife, a Chippewa-Cree and Shoshone, has been performing the “chicken dance” for more than a decade. According to legend, the power to dance like sage-grouse was bestowed on a young man by his spirit-helper after he watched sage-grouse strut. Big Knife is a third-generation chicken dancer from the Wind River Reservation in Wyoming. 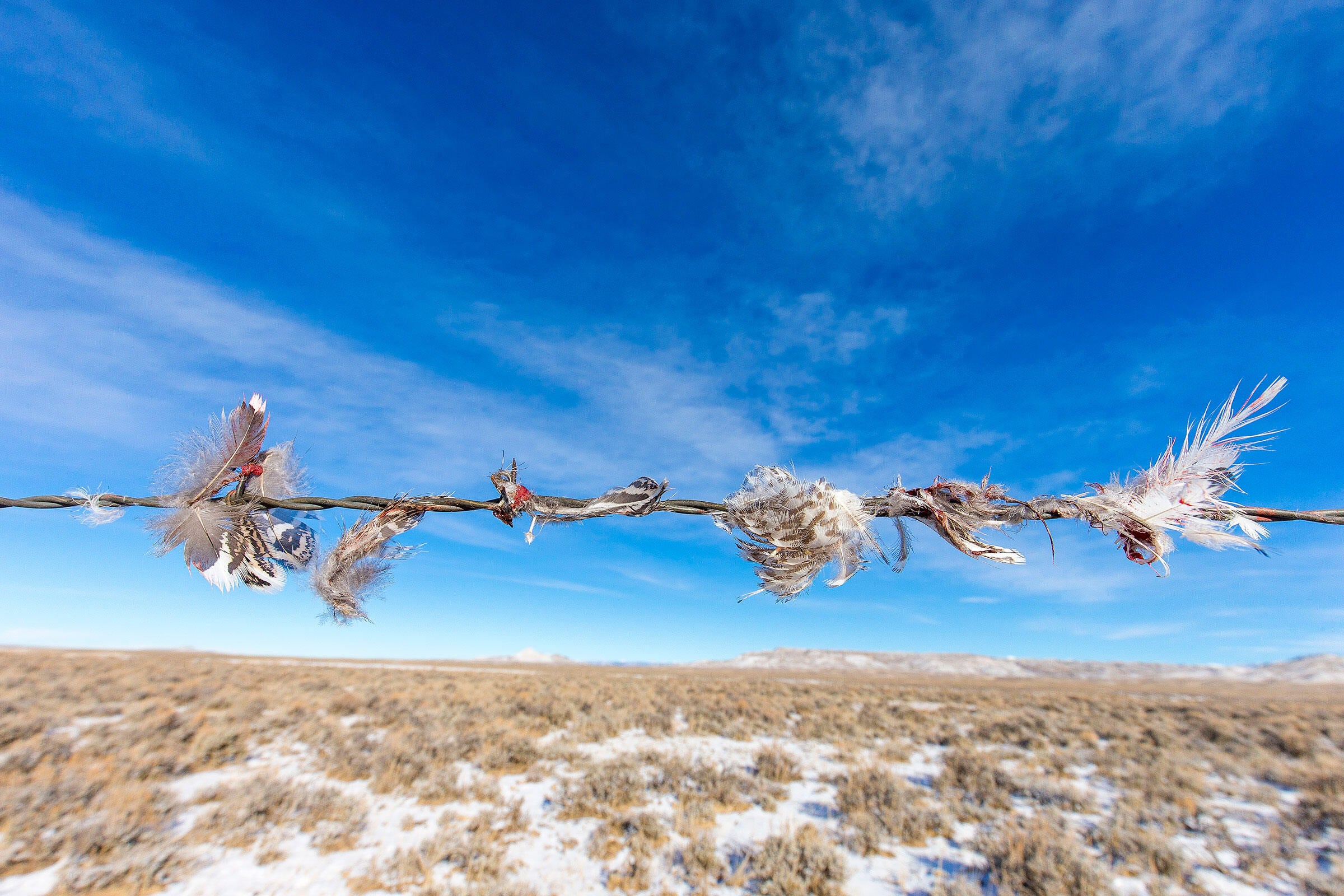 Sage-grouse are no match for man-made barbed wire fences that cut across their habitat. Through the Sage Grouse Initiative, a multi-state public-private partnership, more than 741 miles of fence in key grouse habitat have been removed or marked with flags to make the structures visible to the birds. 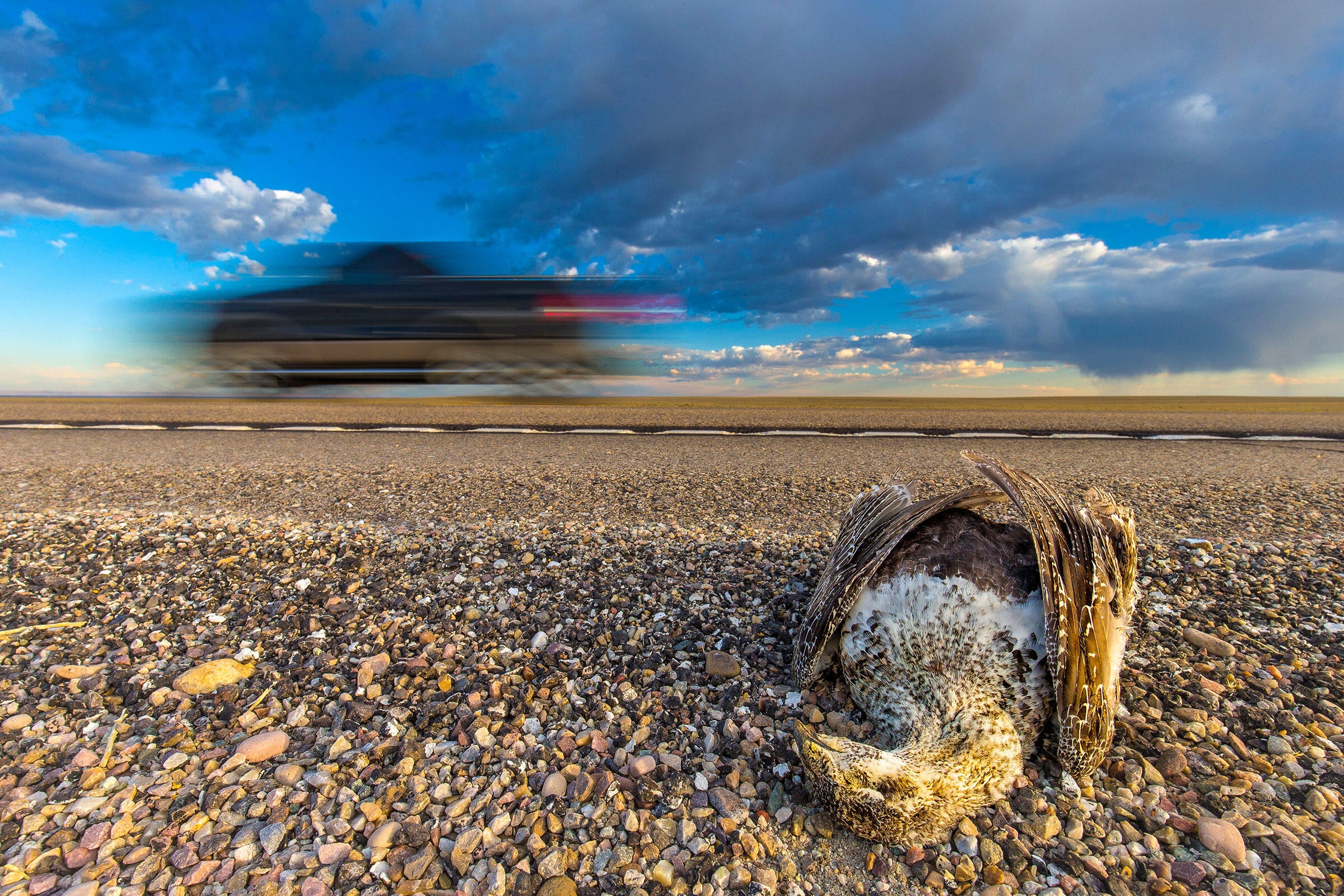 A dead juvenile on Highway 28 in Wyoming. The birds most often collide with cars in the summer, when they travel about in search of food and water. Sage-grouse have long fallen victim to humans on the move: In the 1800s, John James Audubon noted that the bird “often runs under the horses of travelers when disturbed.” 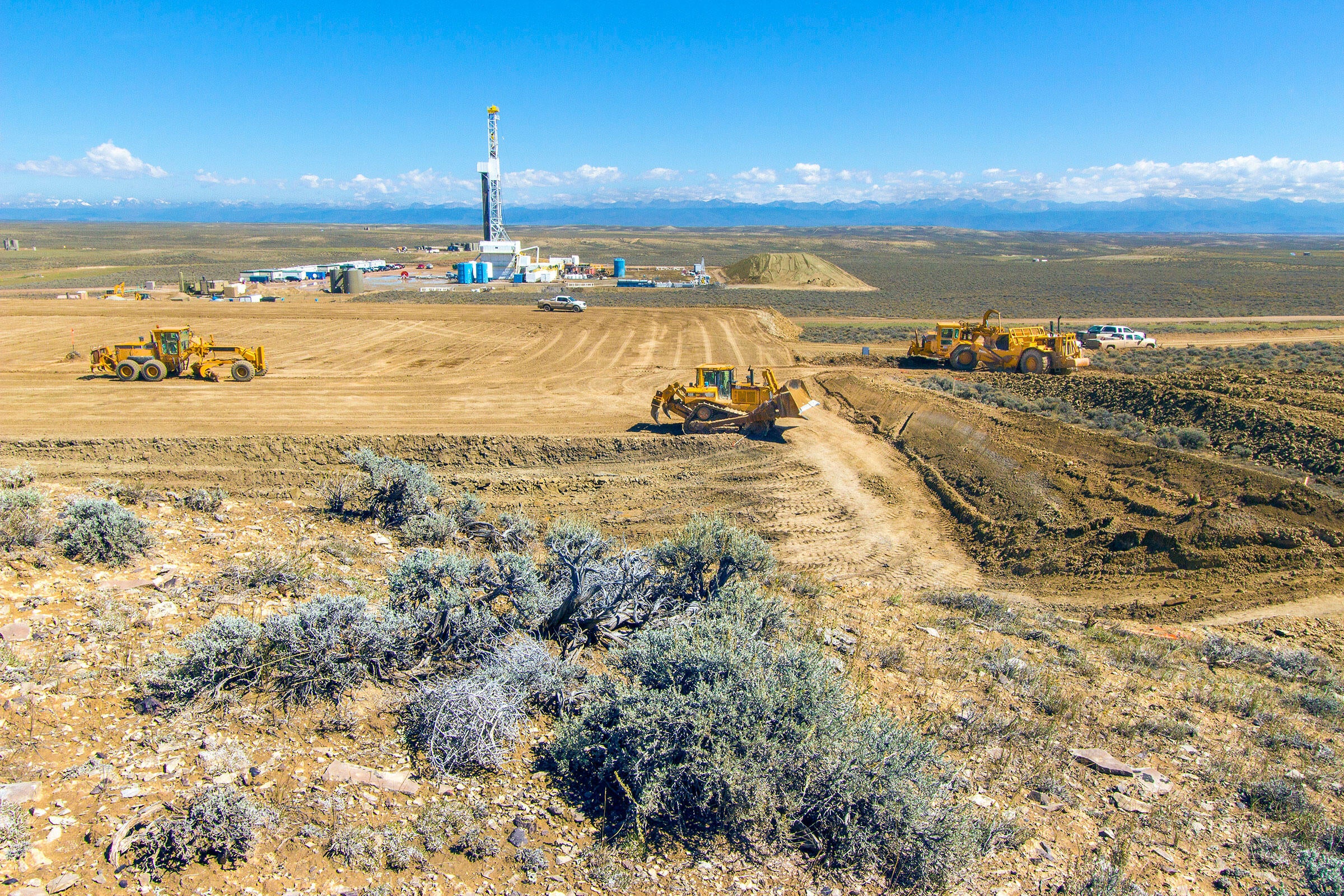 Heavy machinery has removed sagebrush and cleared the surface for gas exploration and drilling at Jonah Field, south of Pinedale, Wyoming. Before the wells went in about a decade ago, the area was home to a lek where several dozen sage-grouse males danced. The number has dropped to a handful today. Such declines aren’t unique to this site: From 1991-2011 oil and gas well-pad density increased 3.6-fold across Wyoming and was associated with a 24-percent decline in the number of male sage-grouse, a 2014 study funded by the state’s Game and Fish Department found. 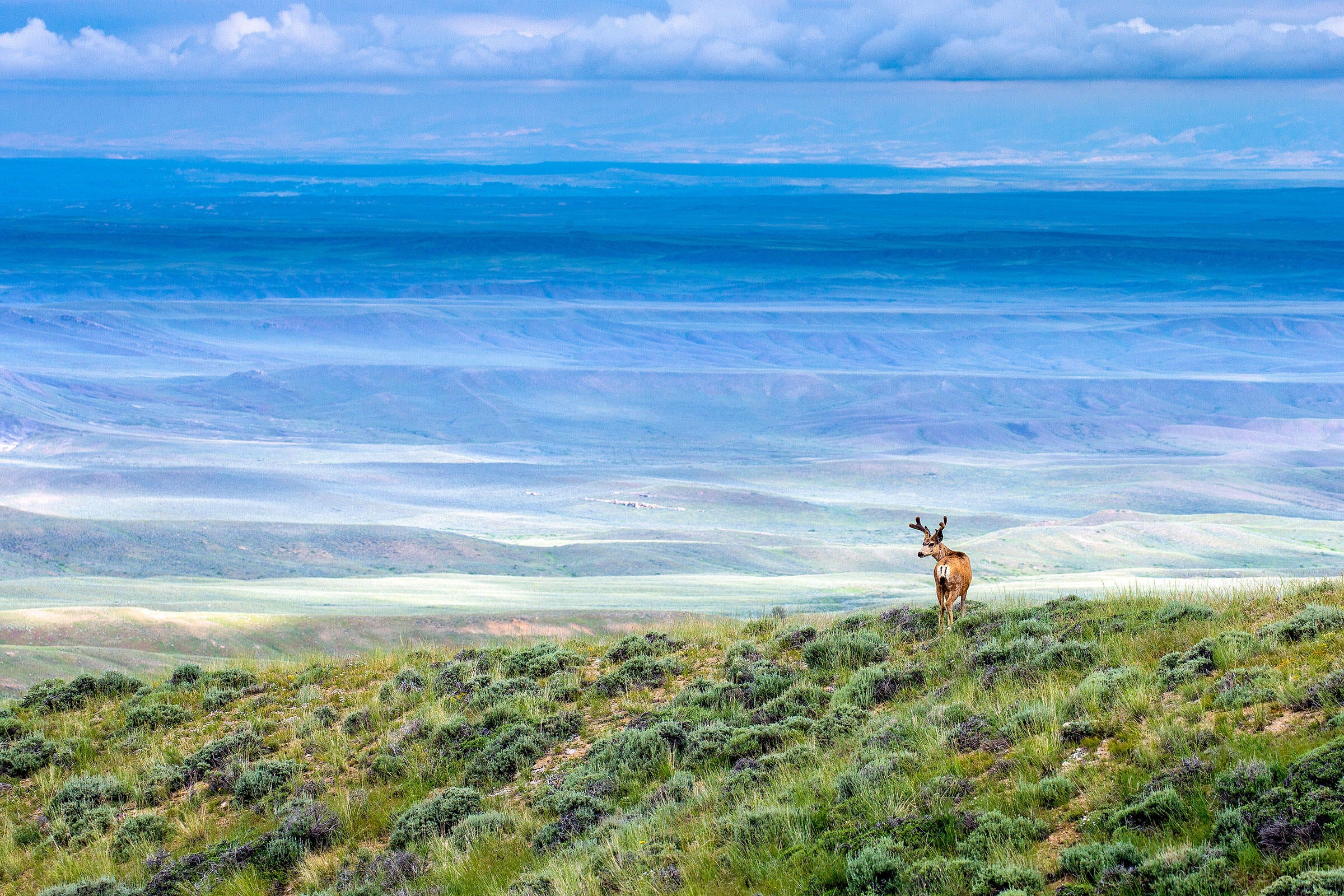 The Sagebrush Sea once covered 250 million square miles in 11 states, but development has shrunk it to half its original size. The vast expanse is home to hundreds of species, including Western Burrowing Owls, pygmy rabbits, pronghorn antelope, and this mule deer, which Paothong photographed in Wyoming. 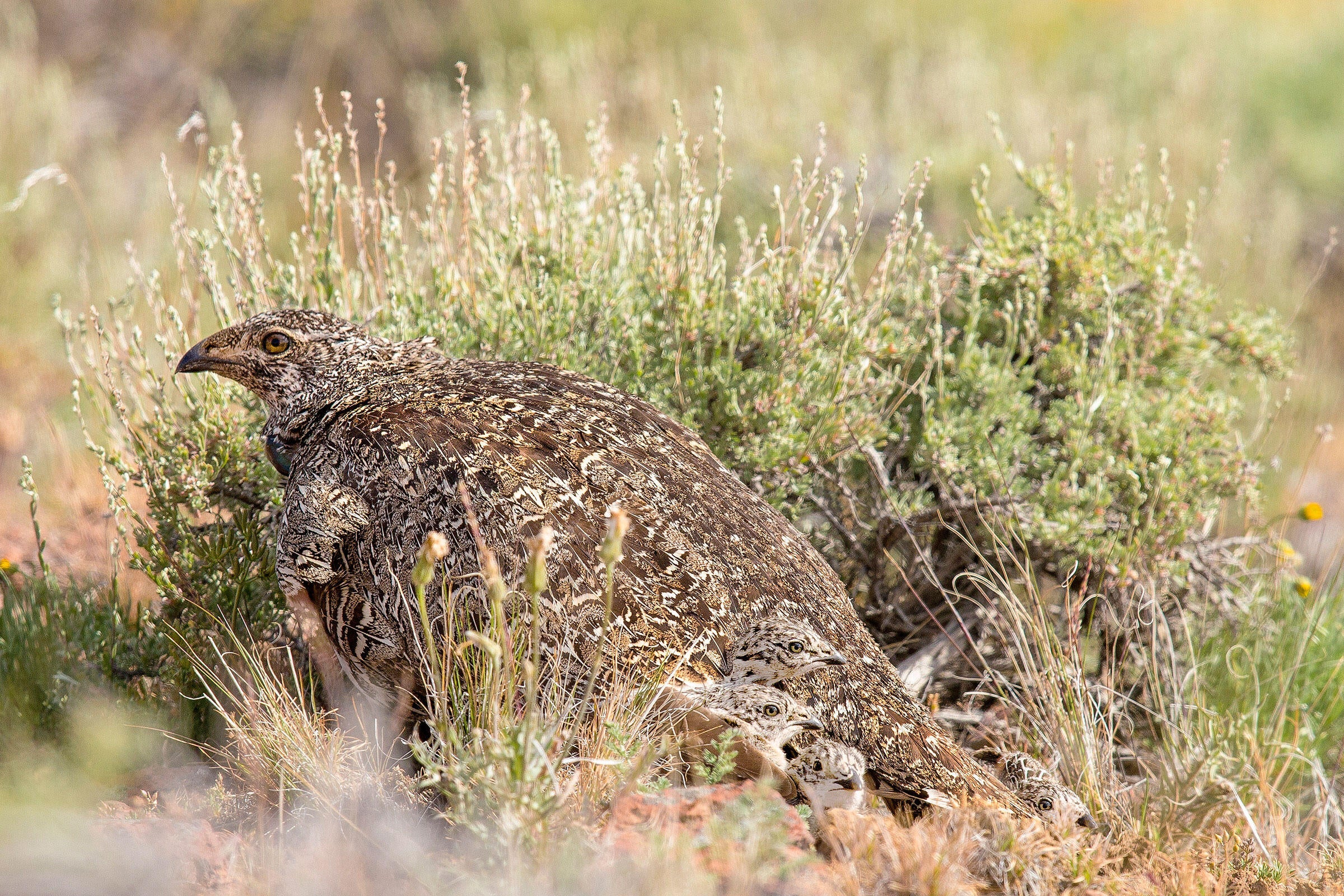 Soon after her chicks hatch, the hen moves her well-camouflaged brood to secure habitat with food and water. To capture such intimate shots of females and their young, Paothong often rose in the middle of the night and hiked to remote, roadless areas where hens safeguard their broods. When a hen senses a threat, she may attempt to lead a perceived predator away from her chicks. To ensure that he didn’t startle the protective moms, Paothong set up a blind, making himself invisible to the birds, and enabling him to closely observe them. “It’s really special,” he says, to watch sage-grouse away from the lek. 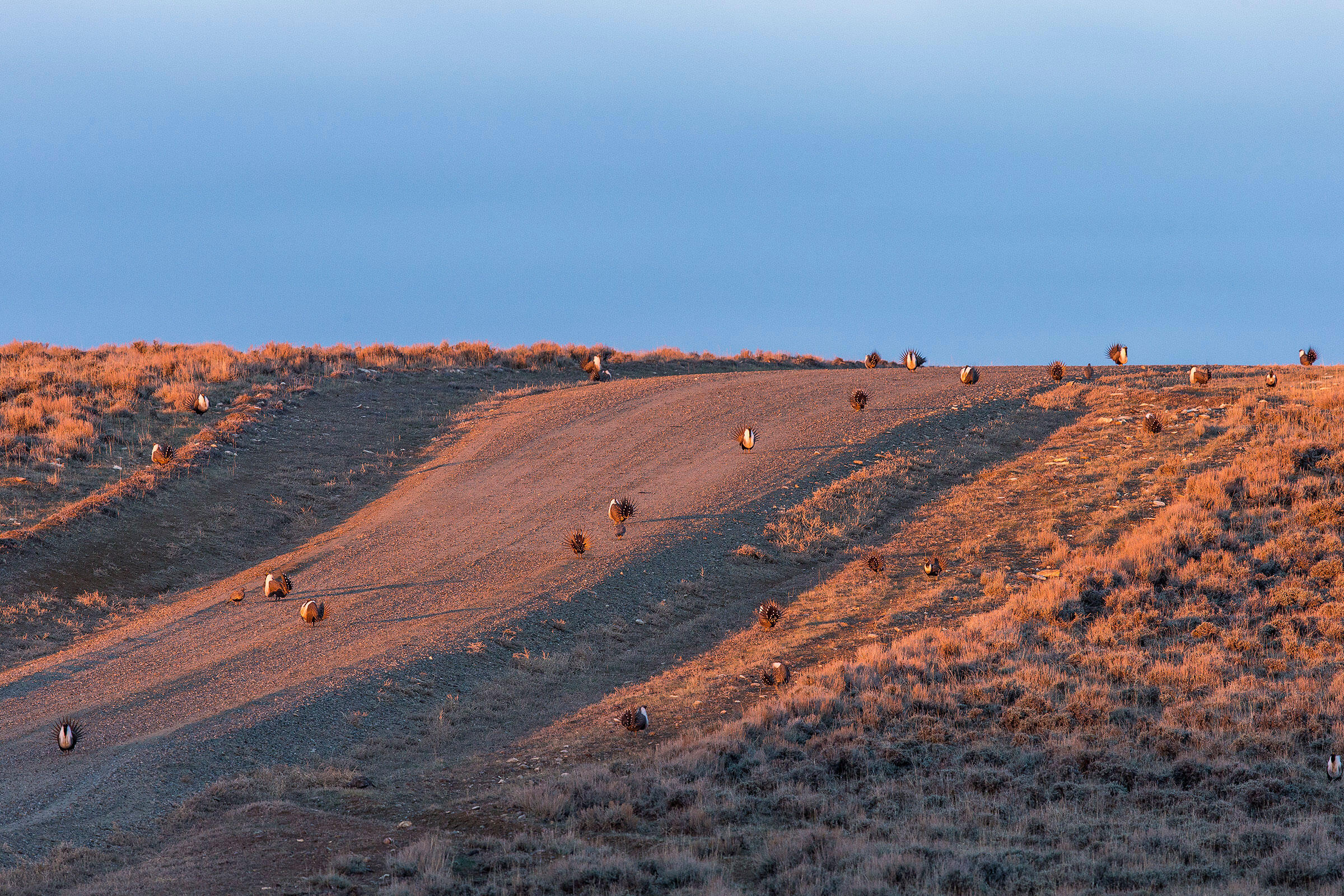 This group of sage-grouse returned to their traditional strutting ground in Wyoming to find it had been turned into an oil-field road. Research has shown that sights and sounds of drill rigs, tanks, and truck traffic can scare off the birds, causing the number of individuals that return to historical lek sites to decline, or stop entirely.

What the Heck Is a Lek? The Quirkiest Mating Party on Earth.

Consider this your guide to the mating ritual that shapes the lives of a hundred dancing, singing bird species.

As the saying goes, if it ain’t broke, don’t try to fix it.