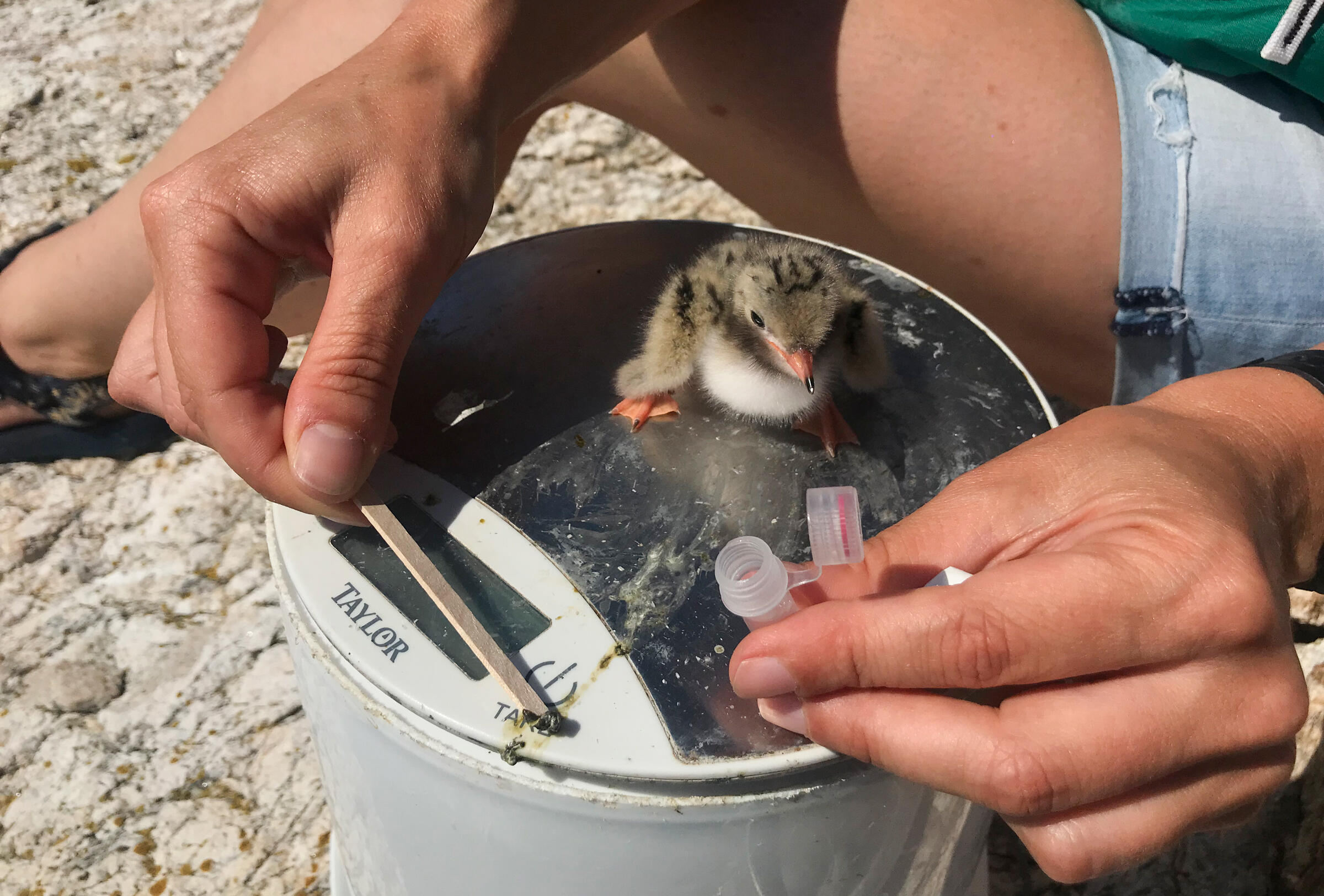 Gemma Clucas collects a sample from a Common Tern to study how the species’ diet is changing in the Gulf of Maine. Photo: Liz Craig

Bird Poop: The Next Frontier of Avian Conservation

Far from waste, a splotch of feces contains valuable information about a bird’s diet. 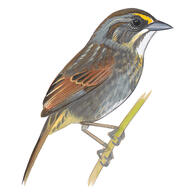 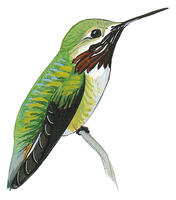 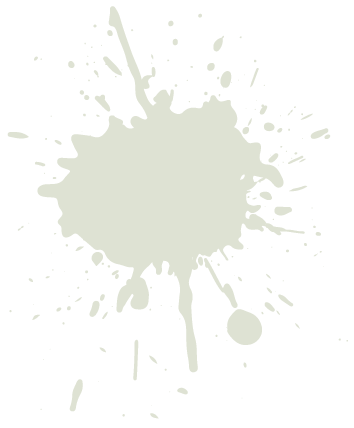 Click or tap anywhere to launch a poo splat.

irds, as the saying goes, are what they eat. And knowing exactly what they eat can help conservationists protect critical food sources and track environmental change. But until recently, sussing out birds’ grocery lists was cumbersome, requiring close observation to determine which type of berry a songbird snatched up or what kind of fish dangled from a seabird’s bill.

Biologists are increasingly turning to genetic tools to eliminate the guesswork of figuring out avian fare. They’re building upon methods that scientists have employed for the past decade to solve other ecological unknowns, such as which animals use a specific environment. You might not see a rare frog in a pond, for instance, but sampling the water for pieces of DNA the amphibian sheds confirms that it was there. Analyzing human stool, meanwhile, reveals hidden identities of microbes that live in our guts.

With birds, the process works similar to a barcode scanner in a grocery store. Scientists match chunks of DNA found in avian poop to a species identification database to pinpoint the plants or animals the bird consumed. Those snapshots are providing a fuller picture of the health needs of species from the tropics to the poles.

As one of the leading biologists harnessing fecal DNA analysis to study avian diets, Gemma Clucas, of the Cornell Lab of Ornithology, is in high demand. “I’m having to turn people away at this point,” she says. “I just don’t have the time to process everyone’s bird poop.”

The Bird: Red-and-green Macaw
The Puzzle: Flocks of these garrulous birds once dispersed seeds from fruits they ate across northern Argentina. Hunting, ranching, and the pet trade drove their local extinction and the decline of native Paraná forest. A bold project aims to return captive-bred macaws to the landscape, where hopefully they’ll help restore flora with their droppings. The uncertainty: Whether macaws raised by people would adapt to foraging on native plants in the wild.
The Scoop: Noelia Volpe, a Ph.D. student at Universidad Nacional del Nordeste, studied nine macaws. She tracked the birds via radio tags, hiking long, muddy distances across a landscape inhabited by alligators. The field work is, she says, “maybe a little dangerous.” Her efforts revealed that the macaws consumed fruit from 32 trees species, and she collected 96 poop samples. DNA analysis turned up 30 known plant species, 13 of which overlapped with her observations. The findings reveal the birds, some two dozen of which fly free today, eat a varied diet, aiding the recovery of their habitat—and their species. 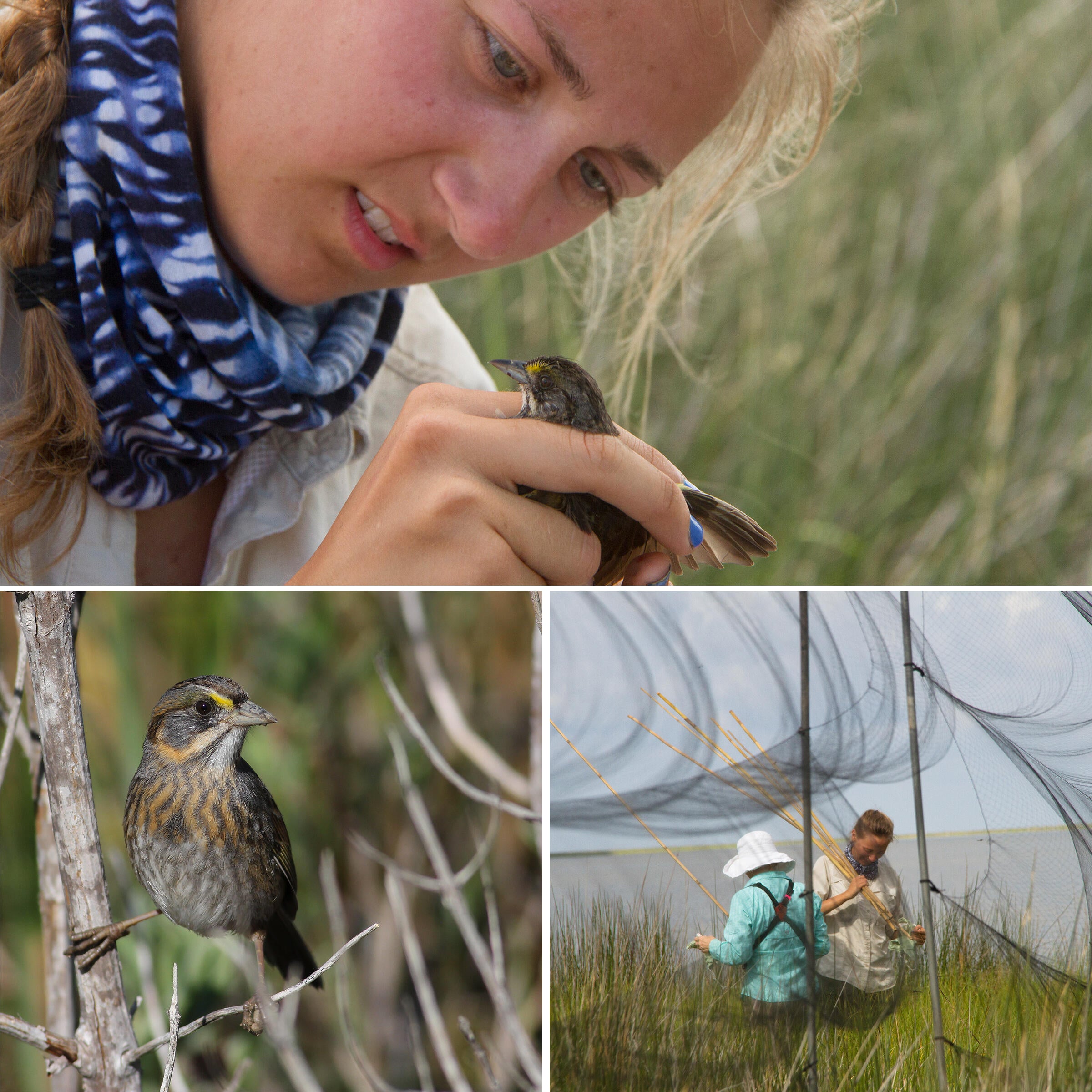 The bird: Seaside Sparrow
The puzzle: Unpleasant as it may sound, fecal DNA analysis is an attractive tool for biologists studying elusive or endangered species. It’s less intensive, intrusive, and costly than finding and monitoring birds for long stretches in order to pick apart their diets. But a long-standing question mark hanging over the method was whether the digestive process might degrade genetic material, thus not providing a complete picture of what the birds ate.
The scoop: Six years ago, Allison Snider set out to settle the uncertainty with the aid of Seaside Sparrows, which forage for insects amid dense marsh vegetation. Then a Ph.D. student at Louisiana State University, she compared the stomach contents to the poop of 59 birds. The feces and undigested stomach gunk had no significant difference in the amount of DNA, and the two methods returned a near-identical list of bugs the birds ate. “I was very, very encouraged to see that they were giving us pretty much the same picture,” Snider says. Her findings confirmed what scientists had generally assumed, helping to pave the way for more ornithologists to use poop. 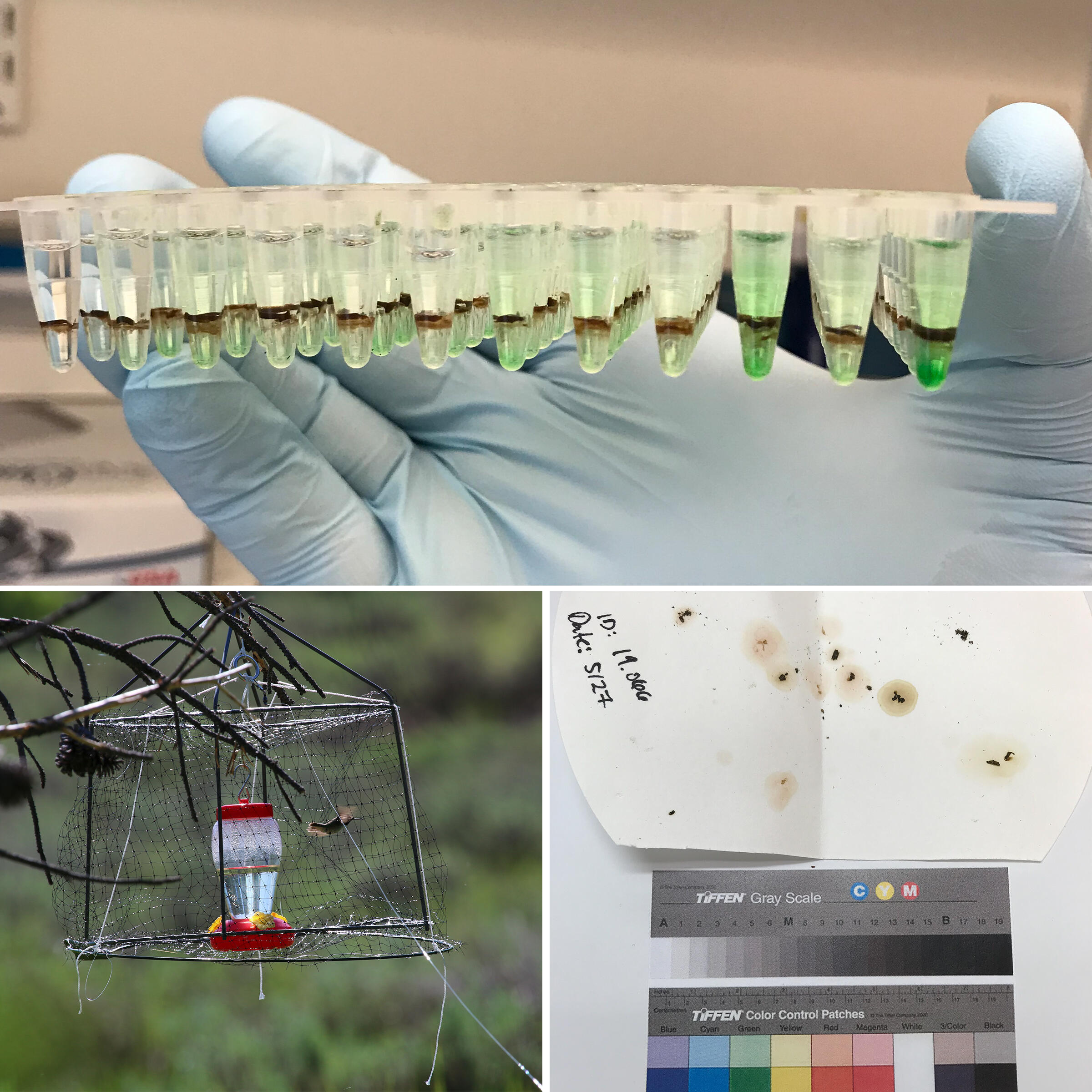 Clockwise from top: Tubes contain fecal samples from hummingbirds that will be processed to identify invertebrates and plant species in their diet; hummingbird fecal samples on filter paper in preparation for DNA extraction; a Calliope Hummingbird caught in a feeder trap. Photos from top, clockwise: Austin Spence (2); Morgan Tingley

The birds: Anna’s, Black-chinned, and Calliope Hummingbird
The puzzle: Feeders readily attract hummingbirds to yards, but determining exactly what insects and plants the tiny, quick flyers depend upon is an impossible task for a person armed with binoculars. Better insights into their diets could have implications beyond the well-being of the birds themselves, as hummingbirds are important pollinators.
The scoop: Austin Spence, now a postdoctoral researcher at University of California, Davis, collected tiny poop samples, the size of water droplets, from more than 150 Anna’s, Black-chinneds, and Calliopes in both urban and rural areas. While he didn’t set out to discover the flavor of hummingbird feces, “I got some on my hands, and it’s a little sweet,” says Spence—perhaps not so surprising given the birds’ nectar-heavy diet. DNA analysis revealed that the three species consumed very similar foods, consisting of an astonishing array of 127 types of insects and spiders and 88 different plants. While the invertebrates they had eaten were predominantly native species, the birds also drank nectar from ornamental shrubs in towns and cities. Although pretty, ornamentals support fewer bugs. Spence says the findings underscore the importance of landscaping with native plants, which both provide hummingbirds with nectar and support the native creatures that the birds also eat. 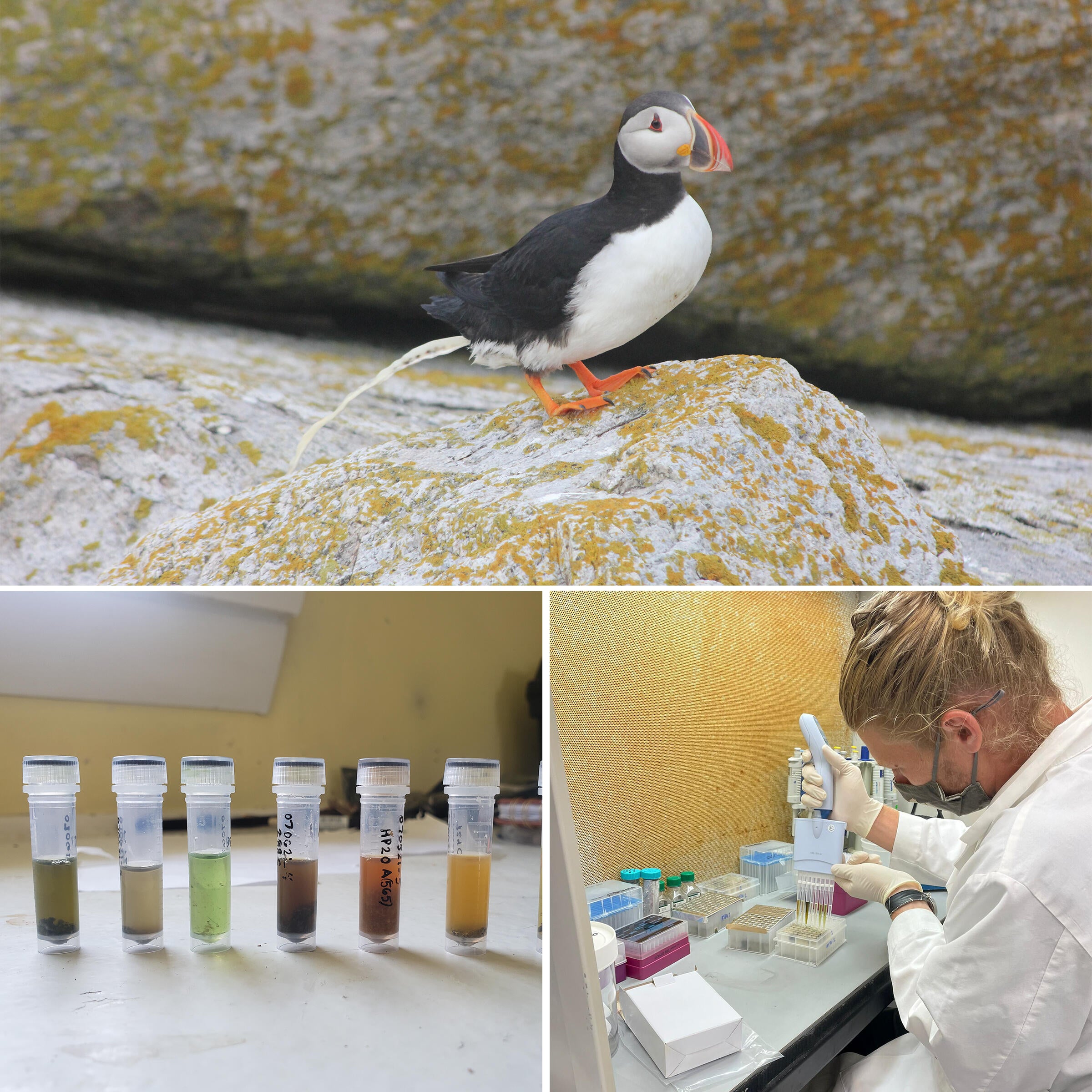 The bird: Atlantic Puffin
The puzzle: Nearly extirpated from their breeding grounds in the Gulf of Maine in the 1800s, today these seabirds face food shortages as rising ocean temperatures alter populations of prey fish. For decades researchers with Audubon’s Project Puffin have observed the charismatic birds feeding their chicks cold water–loving fish, such as hake or herring, which are easily identifiable as they dangle from the parents’ bills. What the adults eat at sea, however, is less well understood. That information could indicate adults’ ability to adapt (or not) to warming waters.
The scoop: Last year Oregon State University graduate student Will Kennerley collected nearly 100 guano samples from adult puffins on Matinicus Rock, one of four puffin colonies in the Gulf of Maine. Perched five feet up in a wooden blind, he kept close observation on the granite boulders below him, where puffins nest. When he saw an adult make a fresh deposit on a rock, he'd scramble across the boulder field to collect the poop with a clean coffee stirrer, dropping it into a vial for safe storage. The goo, which ranged in color from black to bright yellow to red, revealed that mature adults consumed 21 different fish—more variety than previously known. Observers had never, for instance, witnessed a puffin eating Atlantic salmon or spotted codling. That nutritional flexibility may give adults, which can live for two decades or more, a boost when typical prey is scarce.

This story originally ran in the Summer 2022 issue as “The Scoop on Bird Poop.”​ To receive our print magazine, become a member by making a donation today.