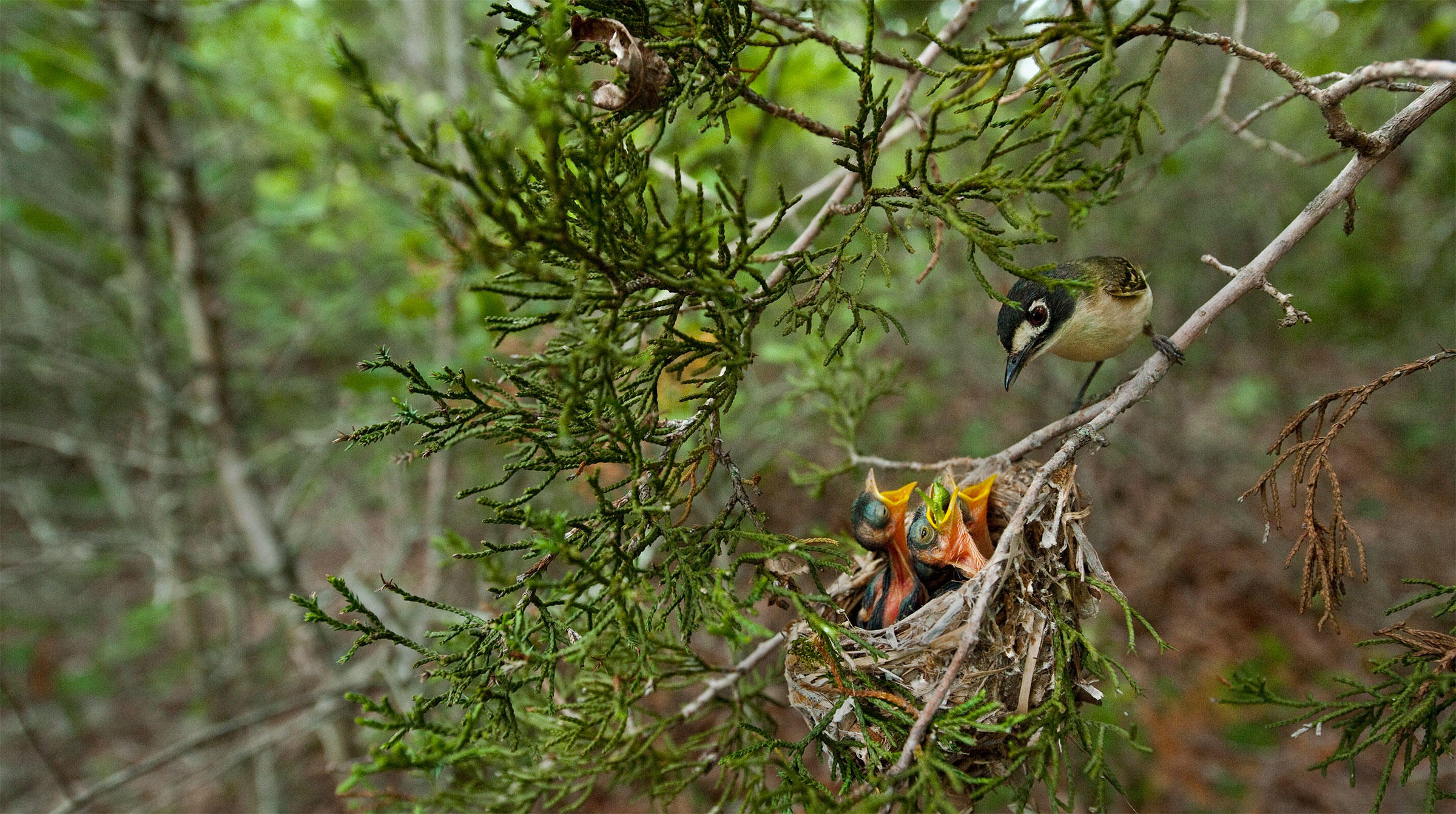 A Black-capped Vireo mother feeding her chicks. In the U.S., the scant species is only found in Texas and bits of Oklahoma, where it nests in scrubby hillsides. The writer's one encounter with the bird occurred at a later-than-usual hour in Big Bend National Park. Photo: Joel Sartore/National Geographic Creative

A Life in Pursuit of Vireos

An illustrious birder outlines the highs (and lows) of chasing these songbirds of summer. 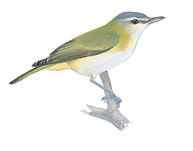 Life needs purpose, and so do birders, especially during those long summer days when most birds are trying to fly under the radar. Yet not the vireos. This sturdy family of songbirds will keep jabbering through the mid-day heat, daring you to come out and find them. See me. No you can’t. Here I am. Way up here. In the tree. Follow the Red-eyed Vireo’s voice as it meanders through the canopy to forage. Hop, stop, search, stretch, and pluck—these hook-billed birds are a caterpillar’s worst nightmare. For birders, they're a real challenge; with their calculated movements and camouflaged looks, you’re more likely to get an earful than an eyeful. And that makes spotting a vireo all the sweeter.

When I was a wee birder growing up in Whippany, New Jersey in the 1960s, the woodlands behind my parents’ house were infested with Red-eyed Vireos. Back then, they were documented to be the most common breeder in the Eastern deciduous forest—and still they evaded me. It wasn’t until I moved to Cape May in the ‘70s that I finally got my first satisfactory looks at Vireo olivaceus among clutches of metallic-colored porcelain berries.

So, had I finally gotten my fill of vireos? Hardly. For some reason we birders are compelled to pursue a species until we see its namesake trait. During fall in Cape May, most of the Red-eyed Vireos that migrate through are juveniles with brown irises. Even the red eyes of the adults appear brown in poor light. Despite crossing paths with many vireos around my new home, I still had a lot to see and learn about the birds.

As memory serves, my second species was the Warbling Vireo, a small, drab, grayish denizen found around tree-lined bodies of water. It has a plainer face than the mascara-lined Red-eyed Vireo, but its song is a melodic delight (as noted in its name). One summer in my teens, my newfound mentor Floyd Wolfarth took me to a willow-draped lakeside in Sussex County, New Jersey, where the birds were common breeders. Once again, however, the species' cryptic plumage and sluggish habits defeated my eyes. Singing from concealed perches, territorial males have no reason to move, and the females, incubating eggs, are even less inclined to oblige. Wolfarth was ceaselessly patient and, eventually, I saw enough of a bird to justify a checkmark in my field guide.

The Warbling Vireo isn't the only species that warbles like a nymph. One of my favorite stories involves the Solitary Vireo—now known as the Blue-headed—that my team overheard at dawn during the first World Series of Birding in 1984. Dismissed by all of us as just another Red-eyed, it was Roger Tory Peterson whose celebrated ears finally recognized the “more deliberate, higher, sweeter” notes described as the Blue-headed Vireo’s song in his book. It was the only Blue-headed we encountered all day, and without Peterson’s diagnosis, our total would have been a meager 200 species, not 201.

But my most memorable vireo encounter was with my wife Linda in Big Bend National Park, Texas. We were closing in on a Gray Vireo, which comports itself like a miniature shrike by swooping and seeking prey on the ground. Whenever we approached, the fiend would fly to the other side of the cactus-studded canyon. Linda, in shorts, paid for the bird in blood.

Perhaps as a way of compensating Linda for her blood loss, on our hike back to the campground we were greeted by the lively song of a territorial Black-capped Vireo beside a desert wash. The stunning creatures are a Texas, Oklahoma, and Mexico specialty. It was a life bird for both of us, and remains our only encounter with this once-endangered species.

Fortunate for me, I have a single species left to tally on the north side of the Rio Grande: the Yellow-green Vireo, a Red-eyed lookalike and a Texas rarity. I say fortunate because so long as I keep missing this bird, I continue to be haunted by vireos—an ache I welcome. As my quest stretches on, my life seems not far removed from that of the eager young boy whose upturned eyes sought the taunting gremlins in the summer oaks so many years ago.