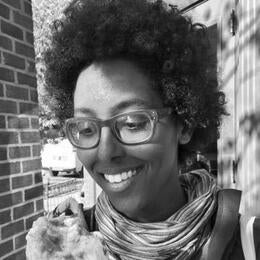 Now, at the age of 96, and with two films about her on the way, Soskin wishes to share her story of “living while black” with the world. Her current status as the oldest National Park Service ranger has brought renewed attention to a life spent fighting injustice. (Her lectures at the Rosie the Riveter National Historic Park in Richmond, which pull from her own experiences living and working in the area during World War II, are among the most popular in the country.) But her newly released memoir, Sign My Name to Freedom, still offers fresh insight—on Soskin the daughter, wife, single mother, organizer, protester, and artist.

Audubon spoke to Soskin about why representation in America’s historical memory is so important, and how to keep one’s fighting spirit alive.

Rahawa Haile: You write fondly of your childhood in the Bay Area’s wetlands and your years spent catching tadpoles and butterflies. As someone who feels at home in nature, how did an early love of the outdoors shape your relationship with the natural world?

Betty Reid Soskin: [In adulthood], one of the first times I had occasion to connect with the natural world was with the Golden Gate Audubon Society in the '70s. There was a film called Farallon Light done by Charles Petersen; I provided two songs for his soundtrack. The documentary was on the removal of the lighthouse on the Farallon Islands, which would affect the birds there, and that was when I really connected again with the concept of the preservation of nature.

RH: You’ve spent so much of your life fighting to be heard and proving that your story matters. What do you think about the forms activism is taking today? Particularly concerning calls for diversity in the outdoors?

BRS: I think that the National Park Service (NPS) is at the forefront of that. I think of the efforts that were introduced under Jon Jarvis, the last director, and under Robert Stanton, when he was the national director of the NPS [from 1997 to 2001]. [They both] saw to it that stories that introduced the diversity that is our American narrative—not just black history—were preserved and maintained by the Service. I think that’s a piece of what I’ve been doing, but I only stand on the shoulders of those who came before me. Really, the NPS is the federal agency with the greatest power to affect that interpretation of American history.

RH: How does the complexity of American history become a false monolith of shared experience? What is the importance of the National Park Service granting you a platform to explain why you’re not a Rosie—a title borne from white women who worked the shipyards and factories during World War II?

BRS: When I came into the park system as a consultant in about 2003, it was very clear that black history was not being left out as a conspiracy. We were simply not present in the room where those plans were being made. Since what gets remembered is determined by who’s in the room doing the remembering, I think people were relieved when I arrived.

I haven’t run into any kind of resistance to the telling of Rosie’s history, honestly. In fact, there are times when I feel that my enthusiasm for inclusion is crowding a very legitimate story that white feminists ought to be present for. I don’t think that I need to soft-pedal my history. I think Rosie the Riveter has a wonderful, feminist story to tell, but it’s a white history—it needs to be based frankly on what it is.

RH: You write passionately about the ways music freed you. How did embracing this outlet during one of the hardest times in your life sustain you?

BRS: It freed me because there was no way to escape from the dilemma I was living in at that time. I was caught in the suburbs with a too-busy husband who rarely came home, with other lonely women whose husbands were all in the other side of the hills making money for the mortgage. I had four children; one of them was mentally disabled. There was no way to escape. The only place for me to retreat was into myself, and that’s where I discovered “Betty the Artist.” But I think she was always there; it was the child that was released during that breakdown. Because of that, I got back in touch with the essence of who I was.

RH: How interesting, because in the opening to your memoir, you write about attempting to reconcile all the Bettys you’ve been and all the lives you’ve lived.

BRS: The experience of being filmed over the past three years has done that for me. It’s had me go back and try to pull together all the parts of me that were disparate. The filmmaking has been really revealing for me. One of the things I’ve found looking back at it all is that there’s a consistency to my life. I documented everything that was happening through the 1960s and '70s—not only to me, but the context in which that was happening as well. I did it through my music, and that music is being used as the soundtrack to these films. That consistency is something that I can only see in retrospect.

RH: I’d like to ask you about rage, because one of the most moving parts of your book is where you write about how you thought you’d outlived yours. In the end, however, you seem to conclude otherwise. So much of the activism we see today is driven by similar desperation, and so I ask you, can we ever really outrun our rage? Or does it find new homes in us?

BRS: I think my rage served me well. I don’t see it as an evil or downside, but as a motivator. It let me transform places in my life where that was the only thing I had. I don’t think I could have survived had I not been enraged from time to time.

I found that I couldn’t use rage for my own purposes, but I could use it in defense of someone else or other causes. When I was standing on the sidewalk demonstrating against a variety of things, it was a collective rage. I was participating, and now, I’m still participating. But that wasn’t until I could own it as it applied to me. It’s when it comes out of your shoes, when you know it’s the only thing you have in your toolbox, that it becomes real. And I think that rage served me well.