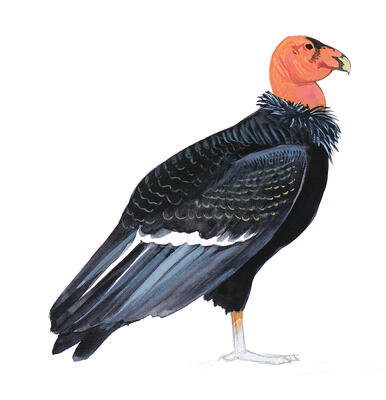 CARLSBAD, Calif. (June 16, 2021) – The U.S. Fish and Wildlife Service (USFWS) today issued a permit for a wind energy project in California that will allow for the incidental take of two California Condors over the next 30 years. The National Audubon Society had submitted comments during the permit process for the Manzana Wind Power Plant, operated by Avangrid Renewables.

Avangrid must commit to taking measures to prevent the incidental death, harassment, or harm of the endangered birds; and provide funding to help raise new birds to replace any who may be killed by the turbines.

“While we will continue to monitor this project closely, we are cautiously optimistic that this project will achieve the goal of limiting harm to this magnificent species,” said Garry George, director the Clean Energy Initiative at the National Audubon Society. “USFWS has done a commendable job of helping restore the California Condor population over several decades. With their management and input from conservation groups like Audubon, we can help protect the birds that we love from injury, and create a cleaner future for both people and wildlife.”

A 2019 Audubon report found that two-thirds of North American bird species will be vulnerable to extinction if global temperature rise is allowed to continue at current rates. Renewable energy like wind power is necessary to help reduce emissions and address climate change, provided that projects are responsibly sited and operated to minimize, mitigate, and avoid harm to wildlife.

Avangrid has already installed a system at the Manzana site that detects when a condor has entered a designated danger-zone that triggers an alarm to shut down the turbines. This permit will make precautions like that mandatory rather than voluntary.

“Audubon’s work with USFWS to protect California Condors goes back to 1964, when we documented the decline of the species and pressured the agency to list the birds as endangered,” said George. “We are encouraged by initial steps taken by this project to protect the condors, and will be watching the implementation of this permit closely, as well as any further applications for take permits for condors given the potential cumulative impact on the birds across wind energy projects in the area.”

To date, no California Condors have been killed by wind turbines. The permit will ensure that innovations like warning systems are funded by the wind industry to help prevent harm to wildlife now and in the future.