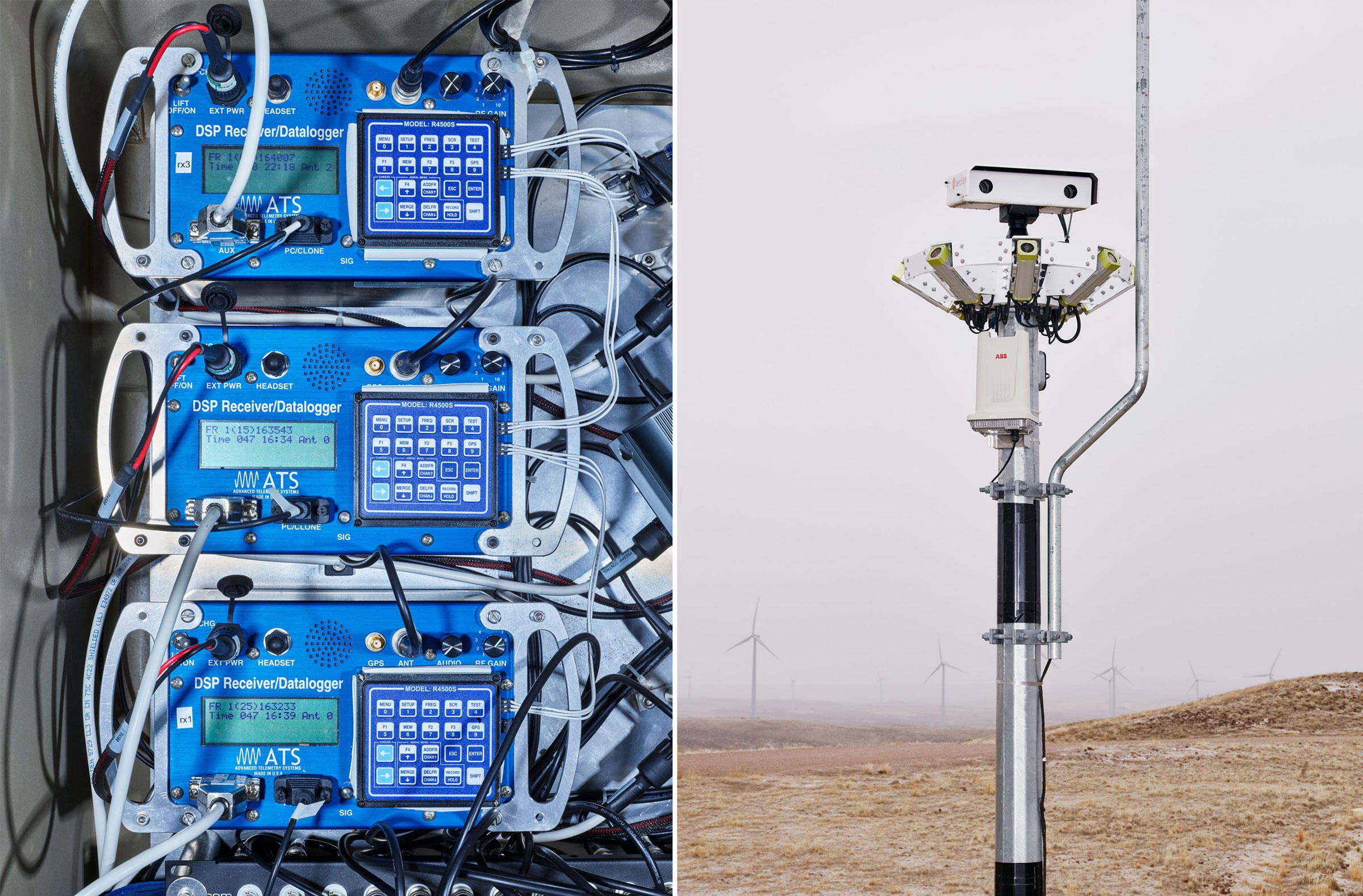 On a bright morning in late January, Amanda Wilhelm stood inside an observation tower nestled among Joshua trees at the Tehachapi Wind Resource Area, monitoring the movements of a California Condor. She wasn’t peering outside at the hundreds of brilliant white turbines, but down at a string of letters and numbers on a monitor. To the uninitiated, the code—SB#=237 . . . Ant 1-North SS=77—looks like gibberish. For Wilhelm, field operations manager for Alta Environmental Services, those numbers were clues. No. 237 is an endangered condor, one of 80 that inhabit this pocket of Southern California. At 2:48 p.m. the previous day the north antenna picked up its radio transmitter signal. “The signal strength is 77, which means it wasn’t very close,” she said.

The modest beige tower is the nerve center of a high-tech system developed to prevent No. 237 or any other condor from colliding with one of those many turbines. In 2010, as plans were being hatched for the Alta project here, condors presented a problem. Since the species nearly went extinct three decades ago, a captive-breeding program has rebuilt the wild population to 290 birds in the United States and Mexico. As the Southern Californian flock has grown, its range has expanded northeast from the coastal mountains to the Tehachapis and the Southern Sierra Nevada, putting the birds ever closer to wind farms that have sprouted here since the 1980s. While lead poisoning remains the primary threat to recovery, the possibility of condors colliding with turbines concerns the U.S. Fish and Wildlife Service.

“We sat down and asked, ‘How in the world are we going to address the event of a condor perhaps flying through a wind farm?’ ” said Kevin Martin, who runs Alta Environmental Services, which operates the bird-monitoring system here. He realized the situation was unique: USFWS has outfitted most free-flying condors with a radio transmitter, GPS transmitter, or both. “Since they're so closely monitored,”  Martin said, “it gave us an opportunity to use that system, and sort of turn it on its head.”

The system Martin devised is based on two principles: Know if a bird is coming, and make sure blades aren't spinning when it arrives. Two 50-foot antenna towers continuously scan for the birds' radio frequencies, and one member of a three-person team drives around with a handheld antenna; when an approaching bird pings in, she triangulates the signal, pinpointing its location. An additional security layer, an invisible Google Earth—enabled “geofence” around the farm's perimeter, texts the team if any GPS-tagged condors cross over. 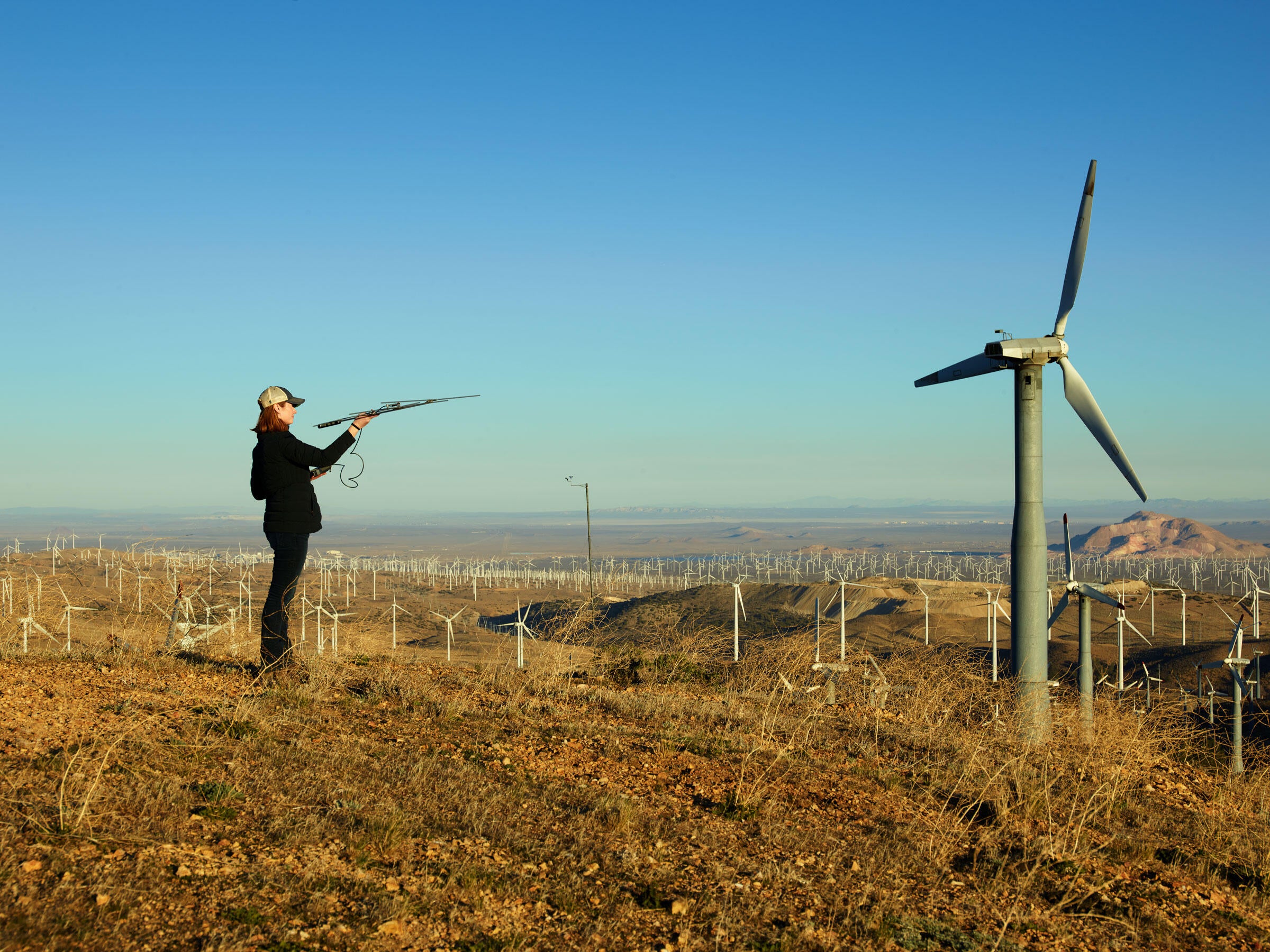 If a bird comes within two miles of a turbine, an employee in the tower figures out which company owns the unit in question and calls the operator to recommend a “curtailment,” or temporary shutdown, until the coast is clear. So far, the system is working. Depending on the season, there may be a couple curtailments a week. And while there have been hairy moments, like when dozens of condors descended on the area in 2016, no birds have been harmed.

Tech: When DTBird cameras detect a bird, speakers emit warning sounds; if it comes closer, a more alarming noise plays and a curtailment can be automatically triggered.

Status: On the market

As Martin pointed out, the condor situation is unique: one small flock of birds, the vast majority conveniently sporting transmitters. But the condor-detection system is just one of a host of technologies being developed and tested at government labs, universities, and tech companies across the country that aim to make wind energy safer for birds.

For two decades, the industry's threat to birds has been at the center of a highly politicized debate. Critics point to turbines killing hundreds of thousands of birds annually—mostly songbirds, but also larger species, notably Golden Eagles. The wind industry responds that those mortalities pale in comparison to the deaths caused by cats or power lines. Yet neither viewpoint captures the full picture, because the debate is complicated by a looming factor: If climate change continues apace, hundreds of North American bird species' ranges will shrink by at least half by 2100, according to Audubon's models. "Climate change is the biggest impact on birds," says Garry George, director of Audubon California's renewable energy program. The rapid deployment of clean energy will be crucial to avoiding that fate. And if wind is part of the mix—as it must be—high-tech safeguards will help ensure birds fly into that future unharmed. 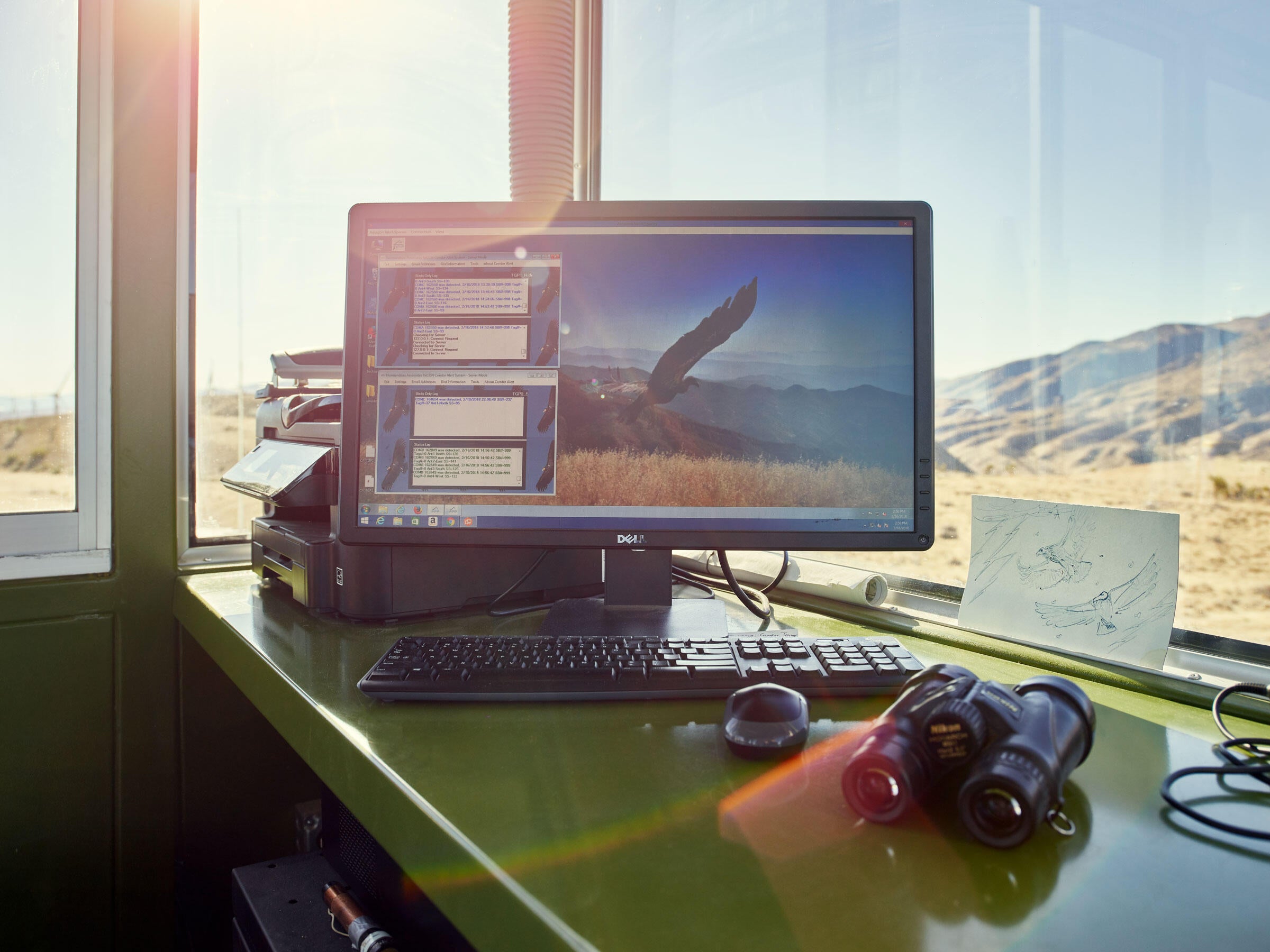 Inside the tower, an activity log alerts staffers when a tagged condor is in the area. Photo: Spencer Lowell

he wind-bird conundrum dates back to the 1990s, when conservationists were reeling from the revelation that hundreds of Golden Eagles, as well as Burrowing Owls and other species, were dying at California's Altamont Pass, the site of one of the nation's first wind farms. Over the next decade, researchers amassed data on the perils turbines pose to birds and bats, and how carefully siting farms can minimize that risk. A federal advisory committee made up of representatives from wind companies, government agencies, tribes, Audubon, and other conservation groups was tasked with codifying that knowledge into best-practice guidelines.

The industry recognized it would need to invest more in solutions, said Abby Arnold, executive director of the American Wind Wildlife Institute (AWWI), a partnership between wind companies and green groups, including Audubon, that's a hub of siting and technology research. Because of climate change, the wind industry and environmentalists have a shared interest, said David O'Neill, Audubon's chief conservation officer. "That dynamic allows us to have conversations with the industry so we're part of the solution to help them succeed, and they're part of the solution to help us reduce bird deaths."

For industry, finding solutions makes both legal and economic sense. Under the Migratory Bird Treaty Act (MBTA), as well as the Bald and Golden Eagle Protection Act and the Endangered Species Act, harming birds, even unintentionally, is typically a crime. (The Trump administration and Congress could change that.) That means a protected species could halt a wind project, even after millions of dollars have been invested.

For projects built on private land, as most are, there's little USFWS can do to force a company to take wildlife into account during development. But it can offer certain incentives. In 2012 the agency finalized guidelines developed with the federal advisory committee that lay out a step-by-step process for quantifying and mitigating wildlife threats at a proposed site. The guidelines are voluntary, but USFWS has discretion in referring cases for prosecution under the MBTA; in the event of casualties, a company that made a good-faith effort to follow the guidelines might be treated more favorably than one that blew right past them. 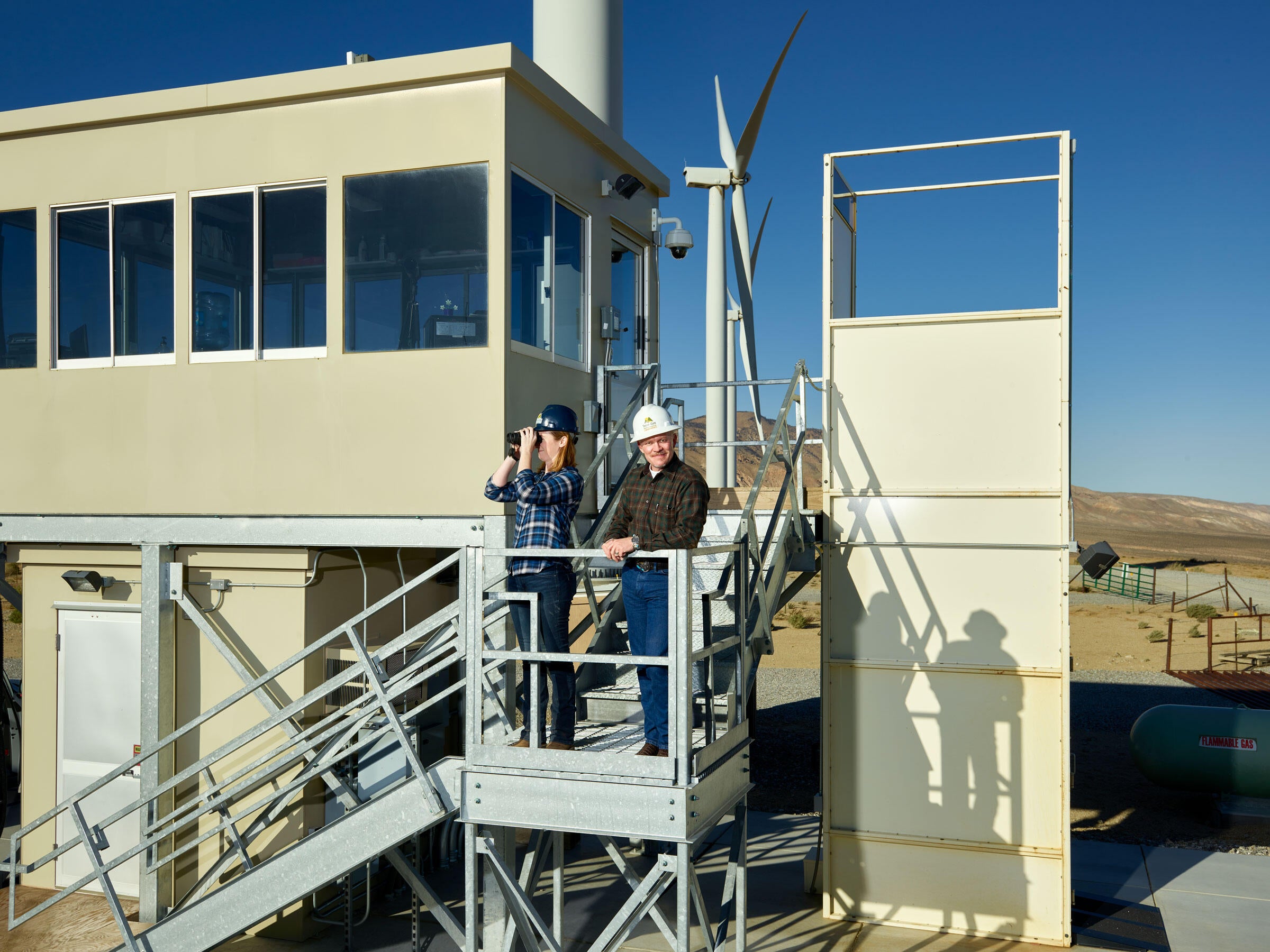 When the guidelines were published, the government had never prosecuted a wind company under the MBTA, whereas it had issued more than 400 MBTA violations to oil and gas companies in the previous two decades. Then in 2013 Duke Energy Renewables was prosecuted for killing 163 protected birds, including Golden Eagles, larks, and blackbirds, at two Wyoming sites. The next year PacifiCorp Energy was charged for avian mortalities at two of its Wyoming projects. Both companies pleaded guilty, acknowledging they'd constructed farms they knew would likely kill protected birds, were fined—Duke $1 million; PacifiCorp $2.5 million—and ordered to develop and implement mitigation plans. The Justice Department emphasized, in the PacifiCorp settlement announcement, the importance of careful siting, noting that no known methods can make a turbine built in a high-risk spot safe.

Tech: IdentiFlight's cameras detect birds near turbines; if its artificial intelligence software determines any are eagles at risk of collision, it sends operators a shutdown signal.

Status: On the market

Correct siting and design—locating a farm outside a migration corridor, for example, or turbines back from ridges where eagles concentrate—remains the gold standard. But the possibility of reducing expected bird deaths at existing farms, or of expanding the number of feasible sites, has driven several new technologies. Most rely either on the detection-and-curtailment principle, like the condor system, or on deterrents that keep birds away from turbines entirely.

The Department of Energy's Wind Energy Technologies Office (WETO) has funded the development and testing of several of these tools. Meeting the Obama administration’s ambitious goal of wind supplying 35 percent of power by 2050, up from 6 percent today, involves resolving avian conflicts: 73 percent of wind energy’s technical potential might be affected by wildlife issues, and 28 percent by Golden Eagles alone, estimated a 2016 National Renewable Energy Laboratory exploratory study.

Tech: U.S. Geological Survey researchers are examining whether the nation's network of weather radar could be used to measure the density and altitude of migrating birds and bats.

Since 2014 WETO has invested $8 million in grants to researchers, wind companies, NGOs, and tech developers working on technological wind/wildlife solutions. “The goal is to help catalyze the development of effective, affordable solutions, and make sure there's a pipeline of technologies,” said Jocelyn Brown-Saracino, who runs WETO’s environmental research portfolio.

These innovations, said Brown-Saracino, could eventually help wind companies meet the requirements to facilitate “incidental take permits.” Issued under the Endangered Species Act or the Bald and Golden Eagle Protection Act, they allow developers with USFWS-approved conservation plans to legally “take,” or harm, a predetermined number of protected birds. For companies, take permits provide legal assurance; for USFWS, they ensure a company does everything possible to minimize harm to protected species. (The Alta project is allowed to kill one condor over its estimated 30-year lifespan.) Since USFWS began accepting eagle take permit applications in 2009, it's issued just three. Companies seeking permits must take measures to mitigate projected eagle deaths, but there’s no proven approach for doing that. A new detection or deterrence system might help fill that void—if it’s confirmed to be effective.

Confidence that a technology does what developers promise also matters to potential buyers. Tom Hiester dreamed up IdentiFlight, which uses artificial intelligence software to identify Golden Eagles, after wildlife issues forced his wind-company employer to scuttle two developments into which it’d sunk some $20 million. When Hiester showed wind company executives IdentiFlight in 2015, “they said, ‘Get independent proof that this works,’ ” he recalled. 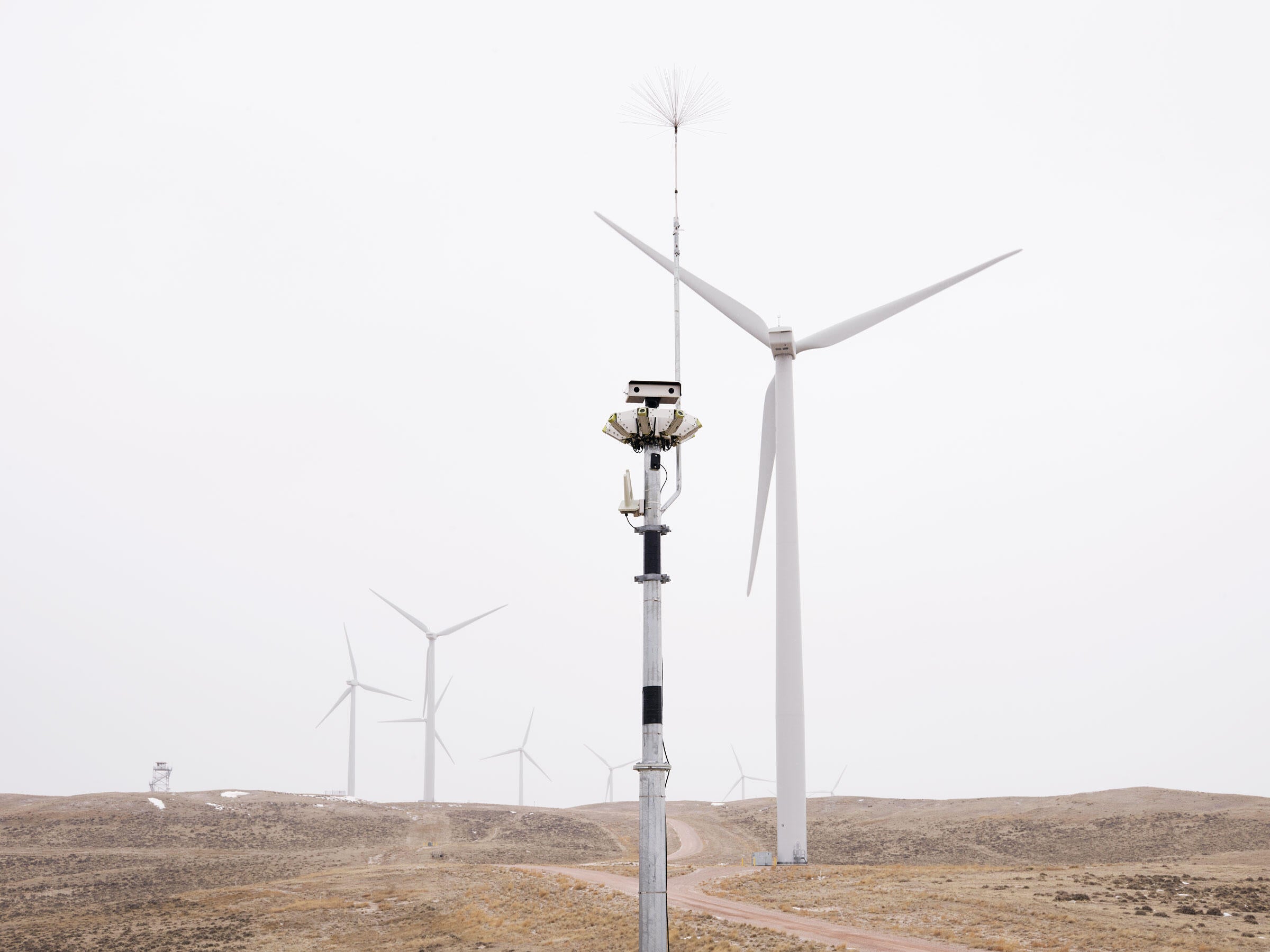 At Duke’s Top of the World wind farm outside Casper, Wyoming, an IdentiFlight unit scans the horizon for raptors. Its AI software can pick out eagles at risk of collision and trigger a turbine curtailment. Photo: Spencer Lowell

Fittingly, Duke Energy’s Top of the World project, site of most of the deaths that led to its MBTA settlement, has become a testing ground for IdentiFlight. After eagle carcasses appeared, the company's environmental director, Tim Hayes, began looking for fixes, both low-tech, such as installing biologists in a lookout tower, and high: They tried audible deterrents, using a loud noise to try to dissuade birds from the site. They tried visual deterrents, using UV lights. They tried a detection methodology using Doppler radar, the kind that's used to track incoming missiles. Nothing high-tech impressed Hayes.