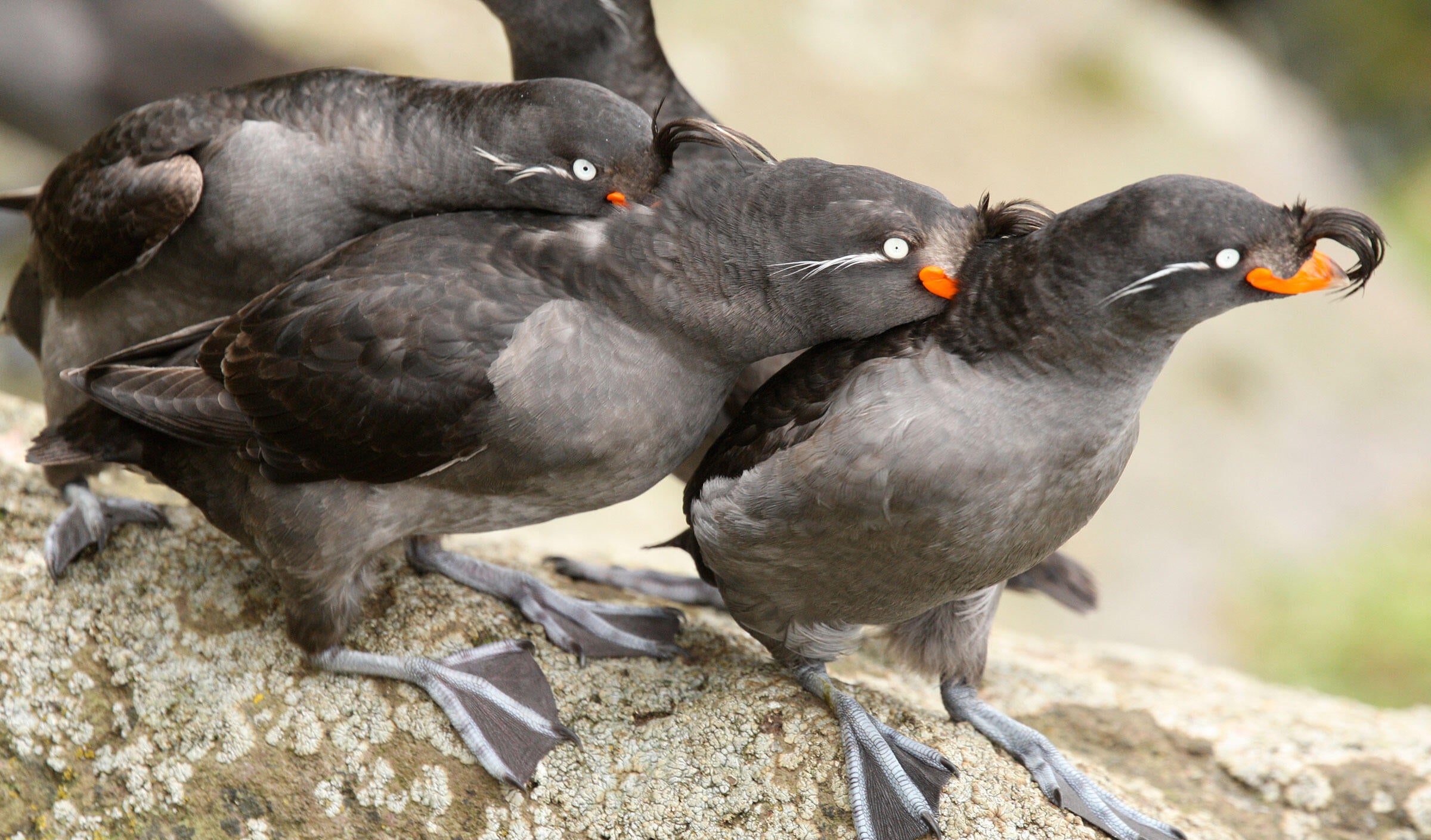 Three Crested Auklets engaged in ‘ruff-sniffing’ behavior; the target for this is usually the nape of the neck where the tangerine-like plumage odor is concentrated. Photo: Ian L. Jones 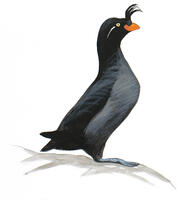 A Crested Auklet colony during the summer is a feast for the senses. It’s loud, with hundreds or thousands of birds clattering and squawking. Each bird is a visual spectacle: Decked out in dusky gray, they look like five-year-olds who broke into Mom’s makeup, with orange Joker smiles, extravagant white eye plumes, and gravity-defying feather crests. And then there’s the smell—a bright tangerine scent so fragrant that researchers can sniff out the birds’ colonies, which are found on islands off Alaska’s coast, from more than a hundred yards away.

“They’re pretty much the craziest little birds that you could ever imagine,” says Heather Major, a seabird biologist at the University of New Brunswick in Canada. Crested Auklets are so unusual that three of their traits haven’t been found in any other birds to date. And all of these unique physical traits appear to play some role in the auklets’ social and sex lives—which are pretty freaky, even for birds.

Take that crest—the “weird little forward-facing ponytail,” as Major puts it—of about a dozen feathers that curl over an auklet’s beak between its beady eyes. The crest’s length helps birds assess whether they’re interested in a possible mate, according to experiments conducted by Ian Jones, a seabird ecologist at Memorial University in Canada who has spent 25 years studying Crested Auklets. In an exception to the bird stereotype of flashy males and drab females, both male and female auklets display these crests. Jones says his team’s paper, published in 1993, was the first experimental confirmation of mutual sexual selection, a phenomenon predicted by Charles Darwin. “There’s a kind of prejudice in the field that it’s only females that are choosy,” he says. “We sort of blew that out of the water.” 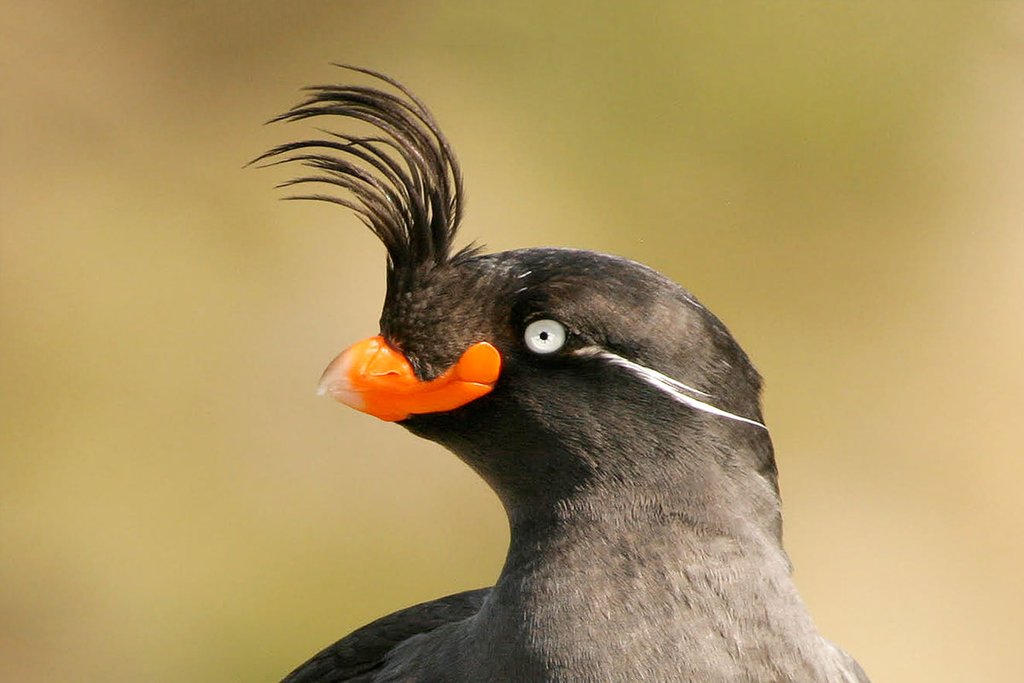 Major may be on the path to confirming a second unique feature in Crested Auklets: a social odor, a strong citrusy scent that may just be the first avian example of an odor that affects social interactions. Scented feathers on their own aren’t that unusual—nature has produced more than 175 varieties of eau de avian. For other birds, scents are used to navigate or deter predators. But Crested Auklet perfume is different: based on their energetic mating rituals (more on that later), Jones suspects the smell may encourage females to approach displaying males. He’s tried to confirm it experimentally, but it’s logistically tricky because the scent fades quickly once feathers are removed from a bird. Other scientists argue the tangerine perfume gives Crested Auklets a bit of protection against parasites.

Perhaps the oddest of the Crested Auklet's three special traits is their fluorescent bills, which were discovered recently by some field researchers. Part of their work included collecting dead birds to create museum study skins. When a bad storm left them cooped up at camp, the bored scientists shined around a diving flashlight that emits blue light, just to see what happened. “When the light passed over the preserved auklets that we had, the bills just lit up. It was really intense,” says Christy Wails, a PhD student at Northern Illinois University. It turns out that the Crested Auklet’s bill plates—temporary structures that surround their beak during mating season—are the first-known bird part (besides feathers) that fluoresce. In fluorescing, the plates don't just reflect light the way colored surfaces do, but actually change its wavelength.

The researchers don’t yet know why Crested Auklets have fluorescent bill plates. But Wails and her colleagues think the brilliant color—like the birds’ other quirks—could have something to do with a strange Auklet mating ritual in which beaks play a prominent role.

It Starts With a 'Ruff Sniff'

At most seabird colonies, there’s a rush of courting and mating at the beginning of the season. But Crested Auklets are kinkier than most seabirds: when two birds court, they do so surrounded and egged on by a whole bunch of other birds in a behavior known as a scrum.

A scrum forms around a male showing off his wares, including his impressive feather crest. He puffs up his body, stretches his neck, and honks, while his black pupils shrink to display a strikingly shiny white iris. If a female (or occasionally two) decides she’s interested, she will cautiously approach, and her own feather crest will help the male decide if he’s interested in her advances. If so, she buries her beak in the male’s neck feathers—where that fresh tangerine scent is strongest—in a move called a “ruff sniff.” The birds also cackle and touch those brilliant orange beaks together. If they hit it off, they’ll twist their necks around each other and rub.

The scene is loud, bright, and smelly enough to attract attention from lower-ranking birds, including juveniles and both male and female adults, who gather around the central mating pair in a scrum. These scrumming birds crowd around, jostling each other to try to get closer to the two courting birds. In particular, they try to rub necks with the mating bird of the opposite sex. “It’s up to 15 or 20 birds in a heap, just partying, going crazy,” Jones says. The birds are so invested in touching the central pair that they often end up standing on each other. 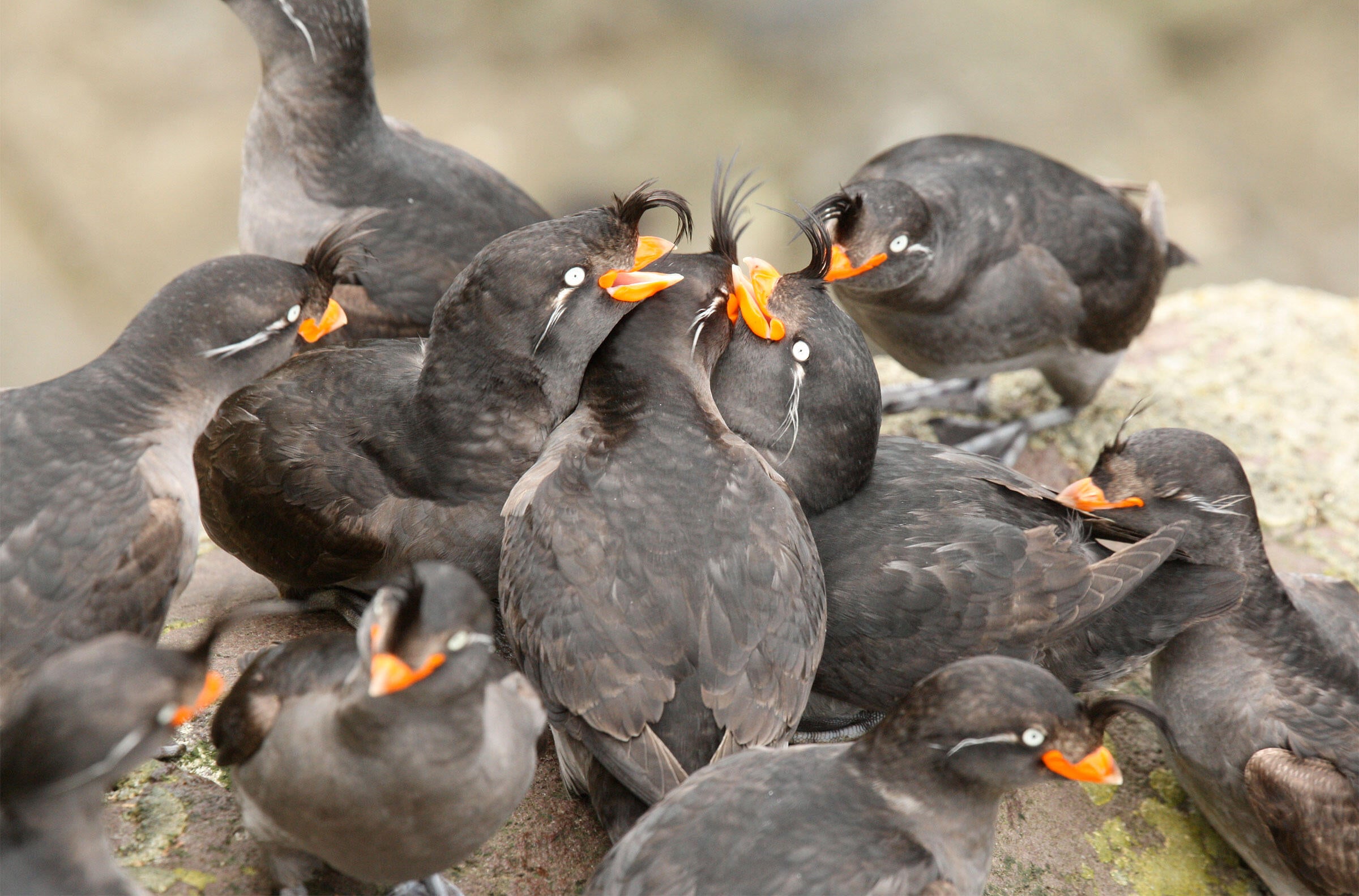 When the party’s over, the pair will take a few days to cool off. If they’re still into each other after that brief respite, they’ll meet up out on the ocean to mate. They again gather a crowd with similar scrumming behavior, although it's been studied less at sea.

The Crested Auklets' closest relatives, while not quite at the same level of weirdness, are also impressive. Three other species of auklet—Least, Parakeet, and Whiskered Auklets—are highly ornamented. Meanwhile, the Cassin’s Auklet, a nocturnal species, makes complex screeching vocalizations. “It’s really just kind of sexual selection running rampant in this group, and particularly in Crested Auklets,” Jones says.

Each August or September, the birds become a bit more ordinary, losing their ornaments and flying off, the birds close enough to whack each other with their wings mid-air, to spend the fall and winter on the ocean. But come late spring, they’ll be back on land in their finery, ready for another round of ruff-sniffing and scrumming—and perhaps revealing still more secrets to watching scientists.