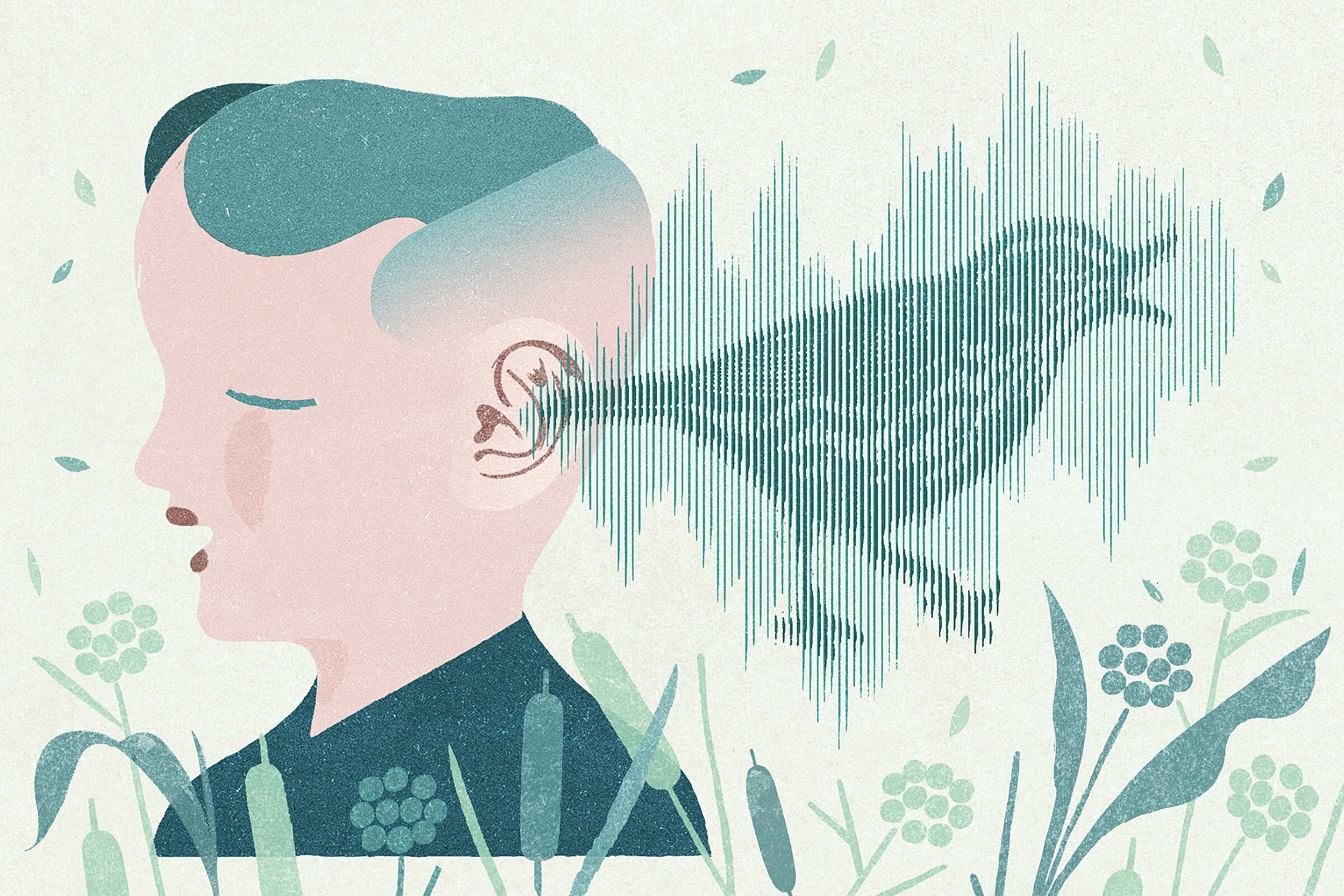 An illustration of a man listening to the song of a Louisiana Waterthrush. Illustration by Gracia Lam

During my last few years of high school, while living in rural Roxbury, Connecticut, I did not have what most people would consider a typical social life. I've been legally blind since early childhood, and as a teenager, I felt lonely and isolated. There was no way to hop in a car and visit friends or crash parties like other kids my age, and there were no buses or cabs around. Admittedly, I was also a bit shy and self-conscious of a birth defect affecting my face—not exactly popularity assets. So, it was just me, my mother, our two dogs . . . and the birds.

Before my mother and I moved to Roxbury, we lived with my father in Fairfield, Connecticut, just outside of Bridgeport. Despite being in a more developed area, my parents raised me to have a great appreciation for the beauty and mystery of nature. They didn’t always know the names of the plants and animals around us, but I used my imagination while creeping around the hedgerows and ornamental trees lining the yards. Our house was on a tiny plot of land, and I was always jealous of the wealthier kids that lived on sprawling properties with woods and probably all sorts of fantastical creatures.

But once in Roxbury, with its abundant woodlands and rolling fields, a whole new world opened up to me. Perhaps it is a coping strategy, but I’ve always felt the need to be an expert on everything around me, especially if it had to do with the plants, animals, and geography I couldn’t see. Books I read, such as Bill Bryson’s A Walk in the Woods, with its impressive descriptions of the diverse American wilderness, reinforced my curiosity. So, in this lush new environment and with nothing but time, I soon became fascinated with the calls and songs of the local birds. Little did I know that my fascination would quickly become a passion that would completely change how I experience the outdoors.

My mom knew enough about birds to teach me the difference between the common call of Blue Jays versus that of American Crows, so there was a start. I also had Microsoft’s Encarta on CD-ROM—this was around the year 2000, after all—which contained some articles on bird varieties, including clips of the species’ songs. Suddenly I knew the ubiquitous song and call of the Black-capped Chickadee, as well as that of the Western Meadowlark. I wanted not only to find them myself, but to learn whatever else I might be hearing. When my mother gave me The Birds of North America CD-ROM, which contained profiles and song clips of nearly every bird in the U.S., I was captivated by the extraordinary diversity of life, color, and music around me and in the various landscapes across the country.

I knew the call right away: a Louisiana Waterthrush—not exactly the most common of birds.

My learning began to payoff, too. In April 2001, on a warm spring morning, I volunteered to help cut and clear invasive plants from a local nature preserve. The violets and trout lilies were just beginning to bloom, and trees were a couple of weeks from leafing out. A short way into the quiet forest I heard a loud, high-pitched, clearly whistled song coming from the shady gorge to my left. I knew the call right away: a Louisiana Waterthrush—not exactly the most common of birds, and my first migrant. If I wasn’t already hooked, the confirmation that this birding-by-ear experiment was working made me an instant birder for life.

As I continued to study bird calls and songs, I also discovered just how accessible nature can be. This was a revelation. Visiting family back in Fairfield, where once it seemed like there was no wildlife, my new skill helped me realize that wasn’t the case at all. I clearly remember one spring visit when I expected to hear just a fraction of what the countryside hosted. There was a lot of sound, though, and not just from traffic—American Robins, House Sparrows, noisy European Starlings. But what was that? Up in the huge butternut tree that bombarded the deck and driveway in the fall, I heard a whistled weep, weep high above in the foliage. It was a Great Crested Flycatcher, a yellow-bellied, reddish-tailed bird my CD told me was a species of forests. “This must be a freak occurrence,” I thought. But then, a most cheerful warble came from a large nearby maple. At such a close range, it was hard to mistake the Baltimore Oriole, another species that is supposed to favor forests, meadow edges, and wetlands. As a kid, I had heard of the Baltimore Orioles baseball team, but no one ever told me such exotica might be flying all around me growing up. “Remarkable!”

Of course, now I know better. While extensive, undeveloped landscapes tend to host the most species, diverse urban habitat, including shade trees, lush gardens with native plants, sources of water, and unmanaged grounds can support all sorts of birdlife at different times of year, especially during migration. I’ve detected upward of 30 species within less than a half mile from the house I grew up in, and at least seven times this number has been recorded in Central Park—right in the middle of Manhattan.

My passion for birds continued to grow in college, where I had the privilege of leaving the East Coast and traveling abroad for two semesters of study. I knew the soundscapes would be completely different, so I purchased and brought along a Jean C. Roche’s All the Bird Songs of Britain and Europe.  Although I didn’t have much information on where each of the 400 species specifically occurred, some persistence and extra reading got me to where I could ramble on to friends about dozens of new and renowned birds, including the Common Blackbird of Beatles fame, the Common Nightingale, the Jackdaw, the Rook, and the European Magpie.

In 2012, at the age of 29, I moved to Portland, Oregon for grad school. Thanks to birding resources online, I had a good idea what sounds to expect when I switched coasts. It helps that about half the species from back home overlap, and much of the remaining avian fauna are closely related counterparts to Eastern birds. Black-headed Grosbeaks, for example, look different but have a very similar song to the Rose-breasted Grosbeak of the Northeast. Nevertheless, there are plenty of new birds, and once I arrived, learning the local avian music scene—the soundscape to my new home—was still a challenge. But one that I happily accepted.

I bet most people living in an urban setting would be shocked to find out they could hear a hawk or falcon in their local park.

During my lengthy trip through academia, including a master’s degree in Environmental Science and Policy and another in Environmental Science and Management, I’ve spent plenty of time mulling the utility and relatability of this passion of mine. A lot of people love birds, but even avid birders sometimes only know species by sight. Yet you are often more likely to hear a bird than see it, so anyone who is interested in birds or appreciating nature really should consider learning to bird by ear. It is a valuable skill that only enhances your time in the field.

But for the blind or disabled, learning birds calls and songs offers even more. It gives a whole new dimension and accessibility to the natural world. You don’t need to be a scientist to get started, and you quickly realize you don’t have to go to Yellowstone to find a rare or special species. I bet most people living in an urban setting would be shocked to find out they could hear a hawk or falcon in their local park. Birding by ear also provides an opportunity to connect with nature that some people don’t think they currently have. Many simply don’t have access to wonderful hiking and birding opportunities due to economic circumstances, an inability to drive or get rides, physical limitations, or simply geographic restrictions. One big reason I picked Portland for grad school, for example, was because of its reliable public-transportation system. I’m lucky enough to be able to catch a bus to a trailhead, but that’s not the case for everyone.

When I do head out on a trail, I sometimes go alone. But if it’s a new or challenging path, I like to go with a person or group. I enjoy sharing my interest in birds and their songs with others, and many folks I’ve gone hiking with have found the ability fascinating. They tell me they’ve heard and enjoyed birds before, but they’d never really considered the natural sounds around them—much less realize it was possible to distinguish one bird from another. But it is, and once you start, it’s hard to stop. You might say it is ear-opening, but I’m fine with eye-opening.

Trevor Attenberg spent four months as a communications intern with the Audubon Society of Portland, where he wrote and researched social media posts and blogs on birds, birding, and accessibility to nature.

Teresa Baker, Activist and Hiker, on Why Kids Are the Future of Our Public Lands

Instagram feeds and internships are encouraging young people of color to join the environmental movement. But we can do more.