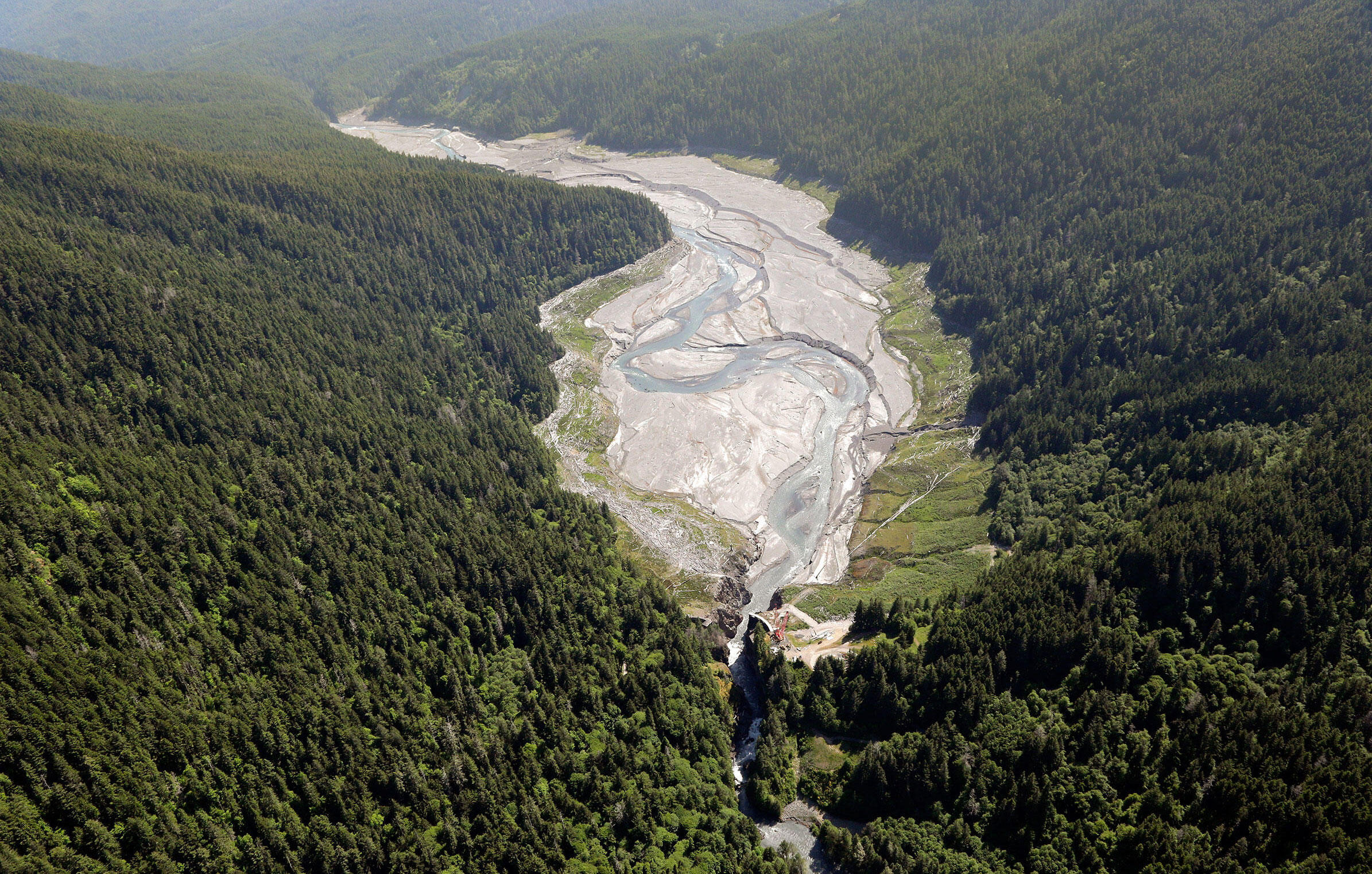 Since 2014, Washington's Elwha River has flowed freely through what once was Lake Mills and the Glines Canyon Dam. But the site still leaves a barren scar in Olympic National Park. Now, a human- and bird-led effort is turning it green again. Photo: Elaine Thompson/AP

After the largest dam removal in U.S. history, scientists, Native Americans, and wild animals are working together to restore the heart of the Elwha.

It's a scorching August day in the Elwha Valley, and it only feels bleaker as we peer into the 200-foot void of Glines Canyon Dam. A sputtering trail of water marks the concrete lip where, for nearly a century, two hulking braces trapped logs, rocks, and sediments as they washed down from the mountains of northern Washington, forming a reservoir that was six times deeper than a competition-diving pool. At its height, the dam churned out 13.3 megawatts of hydroelectricity, enough to power 14,000 homes and a local paper mill. But it also seriously altered the Elwha River’s ecology, along with that of surrounding Olympic National Park. Endangered chinook salmon were cut off from their spawning sites; fish-eating birds and otters suffered; and estuaries became more brackish and shallow. Finally, in 1992, the U.S. government issued the order to destroy Glines Canyon Dam and the nearby Elwha Dam. Yet it wasn’t until two decades later when the water was completely freed.

The dam demolition—the largest in the nation’s history—had a cathartic effect on the park. As the lake behind Glines Canyon drained out, the Elwha slipped back into its ancient route, leaving a millennia-old Indian creation site and other swaths of land exposed. But the heart of Olympic was still scarred and veined. Prior to the construction of the dams, hundred of acres of old-growth forest had been sawed down. It would take take centuries for the valley to fully repair itself. Someone—or something—had to assist.

Thankfully, the Lower Elwha Klallam tribe and the National Park Service (NPS) were already on the case. The two groups have been exploring ways to heal the Elwha watershed since the 1980s, when the razing of the dams was first proposed. “Removal [was] the most dramatic restoration tool we [had],” says tribal biologist Kim Sager-Fradkin. In the end, they decided on a $300-million project that splits the leviathan task of reviving the valley between multiple agencies. The Klallam would repair the basin around the Elwha Dam. About five miles south, NPS would focus on Lake Mills, the dried-up, stump-riddled gulf beneath Glines Canyon.

In 2012, with bulldozers still ripping out layers of concrete, NPS botanists and volunteers began sowing indigenous plants like bitter cherry, salmonberry, oceanspray, and grand fir into the sandy soils of the Mill basin. The seeds and cones are plucked from healthier forests in the park and reared in a greenhouse just outside its bounds, safe from the elements and grazing mouths of deer and elk. Once they’ve sprouted to a good height, the saplings and shoots are placed back in the landscape to help fend off invasive weeds and build a self-reliant ecosystem. “It’s really about allowing this place to restore itself,” John McLaughlin, an ecologist from Western Washington University, says.

However, not all of the plantings are cultivated by hand. The burgeoning river and winds also shuttle willow, cottonwood, and red alder seeds from the woods to the canyon. And McLaughlin, who’s been studying the park's inhabitants for more than a decade, insists there’s another force at play: birds. They’re numerous, mobile, and have been among the first to return to the battered valley. “They’re the ideal partners,” he says

ack in the early 2000s McLaughlin joined a group of scientists to gather baseline data on species diversity in the Elwha Valley. They scrambled to note every sample of pre-removal flora and fauna, from the tops of stumps to the crowns of trees. McLaughlin played his part by documenting birds. He drove or, when the river flooded the road, biked up to the dams every May to parse out and identify calls. “You stand still for minutes at a time, listening for each pip and squeak,” he explains. Once the final stage of demolition wrapped up at Glines Canyon in 2014, McLaughlin shifted his focus to the park’s newcomers; within weeks, he was finding signs of species that weren’t present in his earlier surveys.

During these scouting missions, McLaughlin looked for birds traveling through a 150-feet channel between the Mill basin and neighboring forests. He noted the distance and origin of the flight, along with what each individual chose to land on. Over the course of two seasons, he turned up seven species of warblers and sparrows that hadn’t been recorded before. He also found that American Robins accounted for more than 70 percent of the flights. This was a good sign: Most of the birds on McLaughlin’s list—robins included—favored early-stage habitats. The Park Service’s seeding program, it seemed, was working.

But the birds were more than just hints of success. After the surveys, McLaughlin and his students spent the summer probing the reservoir’s dusty surface for fresh bird scat. The goal was to figure out which seeds were being left behind, and whether the guano was in fact, aiding the Elwha Valley’s revival. They discovered that birds were bringing in woody plants from other parts of the park, essentially delivering the ingredients for a starter forest to the restoration site. The team also concluded that 99 percent of the scat was dropped on top of or under pieces of wood. Logs, McLaughlin says, not only provide a safe perch from hungry weasels, but they also act like micro-nurseries. Growing conditions on the lakebed are harsh, with high sun and wind exposure and strong evaporation rates. The stumps serve as shelter for infant plants while also offering a glut of nutrients.

Still, McLaughlin wasn’t sure if the seeds were even viable . . . which is why he decided to add scooping poop to his list of job requirements.

You Can Help. Don't let birds do all the work. With our native plant database, discover which plants will provide the best habitat for your birds.

ith Glines Canyon in a slow crumble behind us, we wend down to the lakebed. McLaughlin’s graduate student and Klallam member Sara Cendejas-Zarelli points to a wizened stump. A closer inspection reveals a scrap of pink and green breaking out of the sand underneath. As a Pacific Northwesterner, I’m familiar with the plant: Rubus parviflorus, or thimbleberry. “We see anything in this genera, and we get excited,” Cendejas-Zarelli says. Many Rubus produce fleshy fruits, which makes it likely that this seedling was planted here by a bird. (Mice and voles could be responsible, too.)

All the while, McLaughlin delicately tweezes bird scat from the ground to examine back in his lab in Seattle. Once he identifies the seeds (there are multiple in each piece of poop), he adds them to the park's greenhouse collection. So far he’s collected and named thousands of plants in this way—but there’s been little success in growing them: Less than 5 percent have sprouted in the nursery, and McLaughlin isn’t quite sure why. Samples from other sites within the restoration zone could bring some clarity, he says.

Meanwhile, the rest of the greenhouse continues to flourish: Its sun-soaked walls now hold at least 80 species. As of July of 2017, the revegetation project had put 320,000 plants in the ground (the end goal is 400,000). To speed up the growing process and attract more birds, the Klallam are using a helicopter to airlift dozens of logs to the center of the valley floor. There’s a reason behind the urgency. After the dams came down, the reservoirs were flooded with pent-up silt and clay; but without any roots to hold them together, the fertile soils have been eroding away. Plants would bring stability to the landscape.

At the base of Glines Canyon, there’s a gentle wash of green—a reminder that this transformation is still small and early. But the effects of the dam removals are already cascading through the park. Scientists have seen record numbers of Chinook upsteam and have measured better body conditions in American Dippers. And for the first time in decades, the Klallam are setting out crab pots at the river’s mouth. It's not just people who are busy at work, either. Come spring, when the botanists return to their fledgling garden, they'll be greeted by birds that are helping sow the forests of the future Elwha Valley.