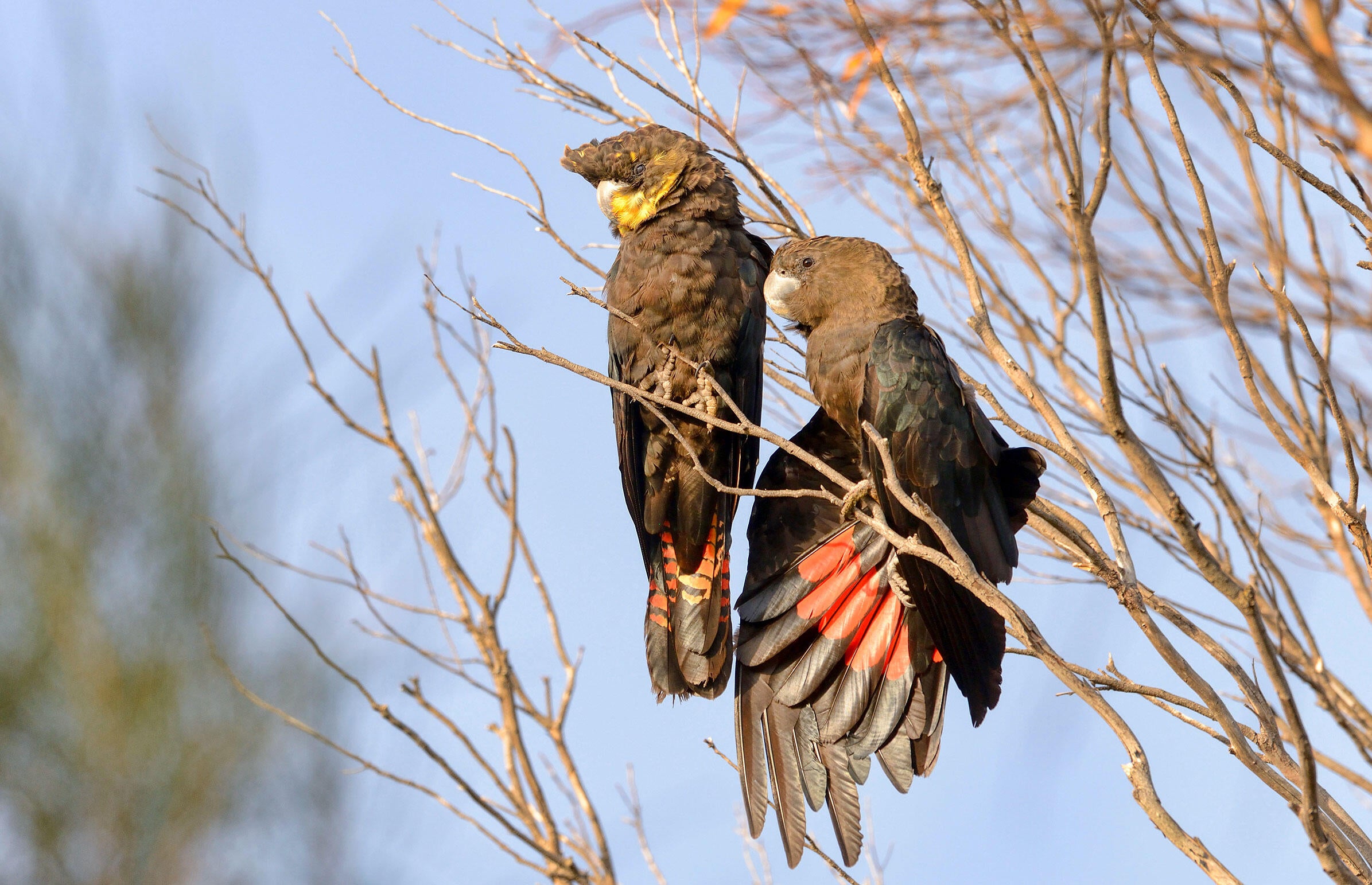 The endangered birds have lost a significant amount of habitat, leaving conservationists concerned about their long-term prospects.

Since September, hundreds of bushfires have blazed through Australia, leaving behind at least 24 million acres of charred land and skies polluted with smoke. Fueled by extreme drought conditions and record temperatures, many fires continue to rage across the country. So far, they’ve killed 30 people, and more than one billion animals are now feared dead.

On Kangaroo Island—one of Australia’s most treasured tourism destinations and a biodiversity hub—the impacts have been particularly devastating. “It’s just black sticks poking above the ground, and that’s about what’s left in certain areas,” says Gabriel Crowley, an environmental scientist at the University of Queensland in Australia.

Located off the southern coast of Australia, nearly half of this 1,700-square-mile island has been engulfed in flames since December 20, when fires first broke out on the western part of the island. With nowhere to go, resident species like the koala, southern brown bandicoot, pelican spider, and the critically endangered Kangaroo Island dunnart have all likely suffered major losses, but the island’s population of endangered Glossy Black-Cockatoos, a southern subspecies of the bird that has seen a comeback in recent decades, is also a major concern for conservationists.

Crow-size birds with brownish-black bodies and red tail bands, the cockatoos were once abundant across the southern mainland of Australia. But starting in the 1800s, European settlers began wiping out large swathes of drooping she-oak trees—the seeds of which the Glossy Black-Cockatoos rely on for food—for agriculture and housing. Stands of mature eucalyptus trees, which provide the natural hollows the birds require for nesting, suffered the same fate.

On Kangaroo Island, though, similar habitat remained intact, and by the 1970s, the subspecies had been effectively forced off of the mainland. Originally, scientists thought the island’s she-oak woodland could support at least 600 of the birds, but a population count of merely 150 individuals in the early 1990s caused alarm. In 1995, what is now considered one of Australia’s most successful recovery programs began. By protecting nest hollows from predatory possums, erecting artificial nest boxes, and planting food trees, conservationists helped cockatoo populations spike to nearly 400 individuals by 2016. The birds live in seven main flocks, and 75 percent of the population lives in the western and northern parts of the island, where the fires have been particularly disastrous.

Although it’s still too early to assess the total damage, there is no question that the recent fires are a huge setback for the past two decades' conservation efforts. “We think somewhere between 50 to 60 percent of their habitat has been affected,” says Daniella Teixeira, a conservation biologist at the University of Queensland, who has been studying these birds for the last four years. This includes every protected area in which cockatoo flocks occur on the western side of the island. “Whether this habitat loss is complete or patchy, we’re not totally sure,” she says. 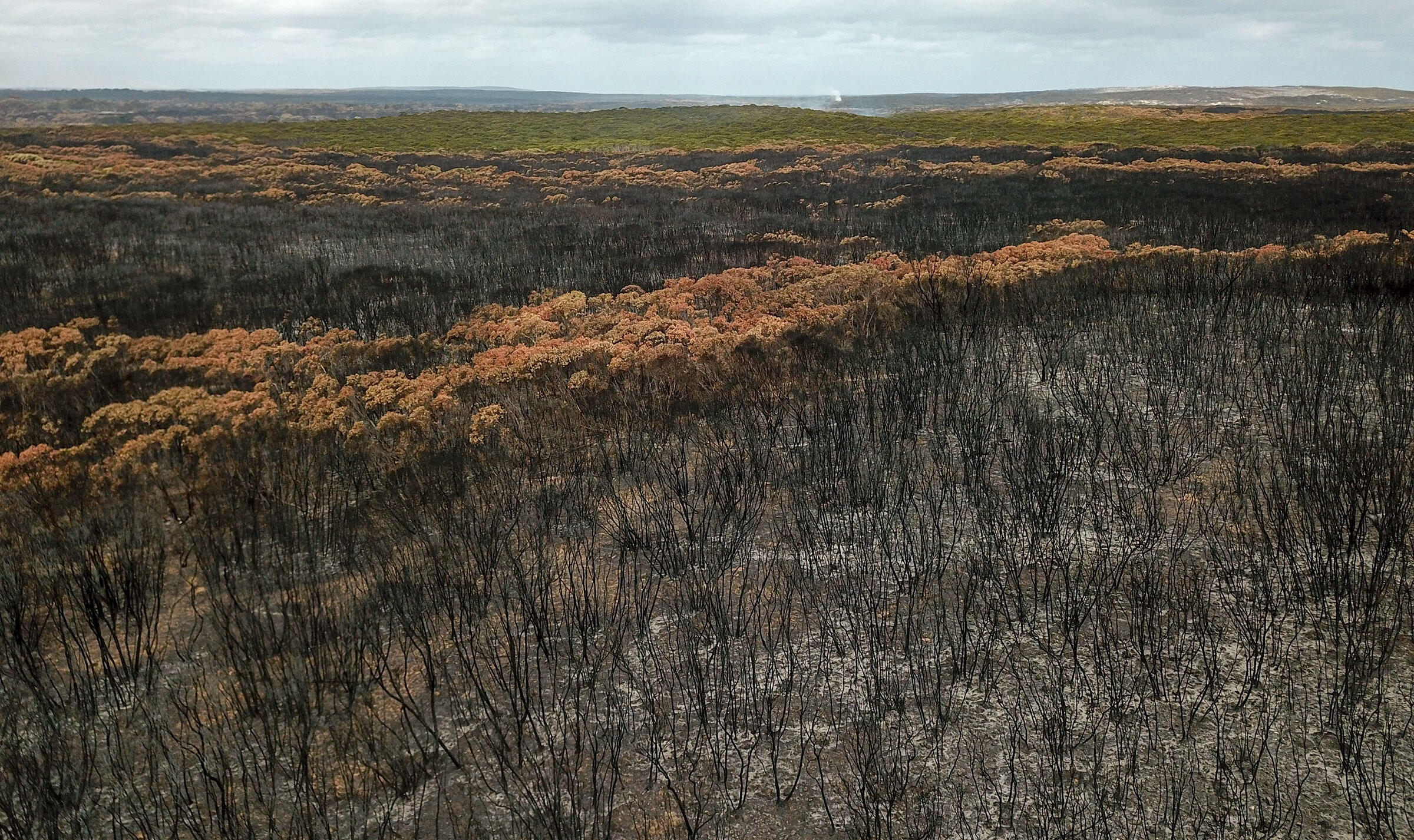 Further causing concern is that at least 90 of the 150 plastic nest boxes used by the birds may have melted or been deformed by extreme heat, says Karleah Berris, manager of Kangaroo Island’s Glossy Black-Cockatoo Recovery Program.

While it’s possible that some birds might have escaped to the relatively unscathed eastern part of the island, such behavior deviates from their natural tendencies. Younger birds will move locations to start a new flock, but flocks typically stick to well-defined territories, called "flock regions."

“We’ve had reports of birds that are alive and feeding on the few trees that have survived [in the western part of Kangaroo Island],” Berris says. “We’re hoping that they’ve survived the initial fire and not too many have actually succumbed to it. But our real concern is how they’re going to feed going forward”

Bushfires are a natural part of the ecological cycle in Australia—plant species like she-oak depend on them to regenerate—but the recent blazes are beyond anything normal. “It would be unlikely for more than 10 to 20 percent of their habitat to burn in any one fire,” Crowley says. “The scale of this event is just so enormous. It will probably be 10 years before any of the burnt stands produce enough food to support cockatoos again.”

In the meantime, emergency efforts are already underway in the eastern part of Kangaroo Island, which still holds patches of she-oak woodland cockatoos could use. Concerned citizens are volunteering to install artificial nesting boxes and plant she-oak trees on their own properties in case any birds do escape to the east.

Whether the birds stay in their regions or relocate, experts believe this year’s breeding season, which typically starts about now, could already be a wash. Berris thinks surviving birds might devote their energy and time to re-establishing territory and finding food instead.

Despite the best efforts of conservationists and citizens, Kangaroo Island's cockatoos face an increasingly uncertain future. As Australia's fires only become more common and intense due to climate change, the long-term survival of such a niche and geographically limited subspecies is tenuous. “We could possibly rescue the Glossy Black-Cockatoo this time,” Crowley says, but next time, "we may not be so lucky.”

A new burn program led by Kija rangers is helping bring back the beloved birds while delivering hope to an impoverished community.

The Amazon's Blazing Fires Are Squeezing Habitat for Imperiled Birds

The fires are not natural to the ecosystem—and add fuel to mounting threats that birds already face in the region.