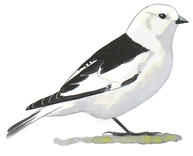 Why should Americans who live in the Lower 48 states care that the U.S. Congress may try to open the Arctic National Wildlife Refuge to oil and gas drilling? After all, it’s thousands of miles away in far northeastern Alaska, a place so remote most Americans will never visit.

Here’s why: No matter where you live in the United States, it’s very likely that some of your favorite local birds were born in the Arctic Refuge and return each year to raise their young. It is one of the most important bird nurseries on the planet and supports millions of birds that migrate from Alaska to every other state and six continents. It is so pristine that you can drink water straight from streams. There are few places like this left on Earth.

Tucked away in the President’s budget proposal, amid high profile cuts to decimate renewable energy research and protections for cherished places closer to home, is a proposal to open the Arctic Refuge to oil and gas drilling. The administration is proposing that Congress use backdoor budget tactics to allow drilling in the biological heart of the refuge—the 1.5 million acre coastal plain between the Arctic Ocean and the towering mountains of the Brooks Range.

Here’s what is at risk. The coastal plain of the Arctic Refuge on Alaska’s North Slope is one of the most intact and untouched ecosystems in America. More than 200 species of birds arrive at the refuge every spring from across the U. S. and the globe. They mate and raise their young in this unspoiled wilderness.

Many of America’s remaining polar bears give birth in winter dens along the coasts and the last great herds of caribou make one of the longest land mammal migrations on earth to calve on its coastal plain.

Petroleum companies are eager to sink their pipes into this fragile ecosystem for the vast oil and gas reserves that they believe lie beneath its surface. But many areas in Alaska are already open to oil and gas drilling and have given us a sneak peek into what we can expect if the Arctic Refuge is opened up.

Drilling is extremely risky business. Alaska state authorities record an average of about 70 oil spills a year. When you take into account spills of other hazardous materials involved in petroleum and other industry, the number hits a staggering 2,250 per year, putting thousands of vulnerable birds at risk. Hazardous material spills — big or small — kill birds, wildlife, and marine creatures.

But that’s not all. It’s not just spills that threaten Arctic birds and wildlife. Construction and operation of a major industrial complex requires a massive spider web of roads, pipelines, fencing and other development that degrades and fragments critical bird and wildlife habitat on the narrow coastal plain.

Oil fields attract predators such as foxes and ravens that prey on nesting waterfowl and other birds as we’ve already seen with oil development in Prudhoe Bay and other central Arctic oil operations.

But here’s one of the biggest reasons not to drill in the Arctic Refuge: We don’t need to. The U.S. has a glut of oil and gas. U.S. stocks are at near record levels. Nor is the Refuge the only option for development in Alaska. Companies have just made the largest onshore find in 30 years outside the Refuge on state land in fields connected to existing infrastructure including the Trans-Alaska pipeline. Not to mention increasingly less expensive and more reliable renewable sources of energy like wind and solar power.

Disturbing one of America’s last untouched places forever for a temporary fix of fuel is not only unnecessary, it’s robbing future generations of their natural heritage. It goes against the American tradition of preserving iconic places like the Grand Canyon, Yellowstone, Yosemite and the Great Smoky Mountains for our children and grandchildren.

This is not Republican or a Democratic issue. This region was first protected in 1960 by Republican President Dwight Eisenhower. The Arctic National Wildlife Refuge has enjoyed bipartisan support from Congress for decades.

This is an easy choice. The Arctic is the backyard for the birds that visit yours. You wouldn’t drill in your backyard, would you? Let’s not drill in theirs.