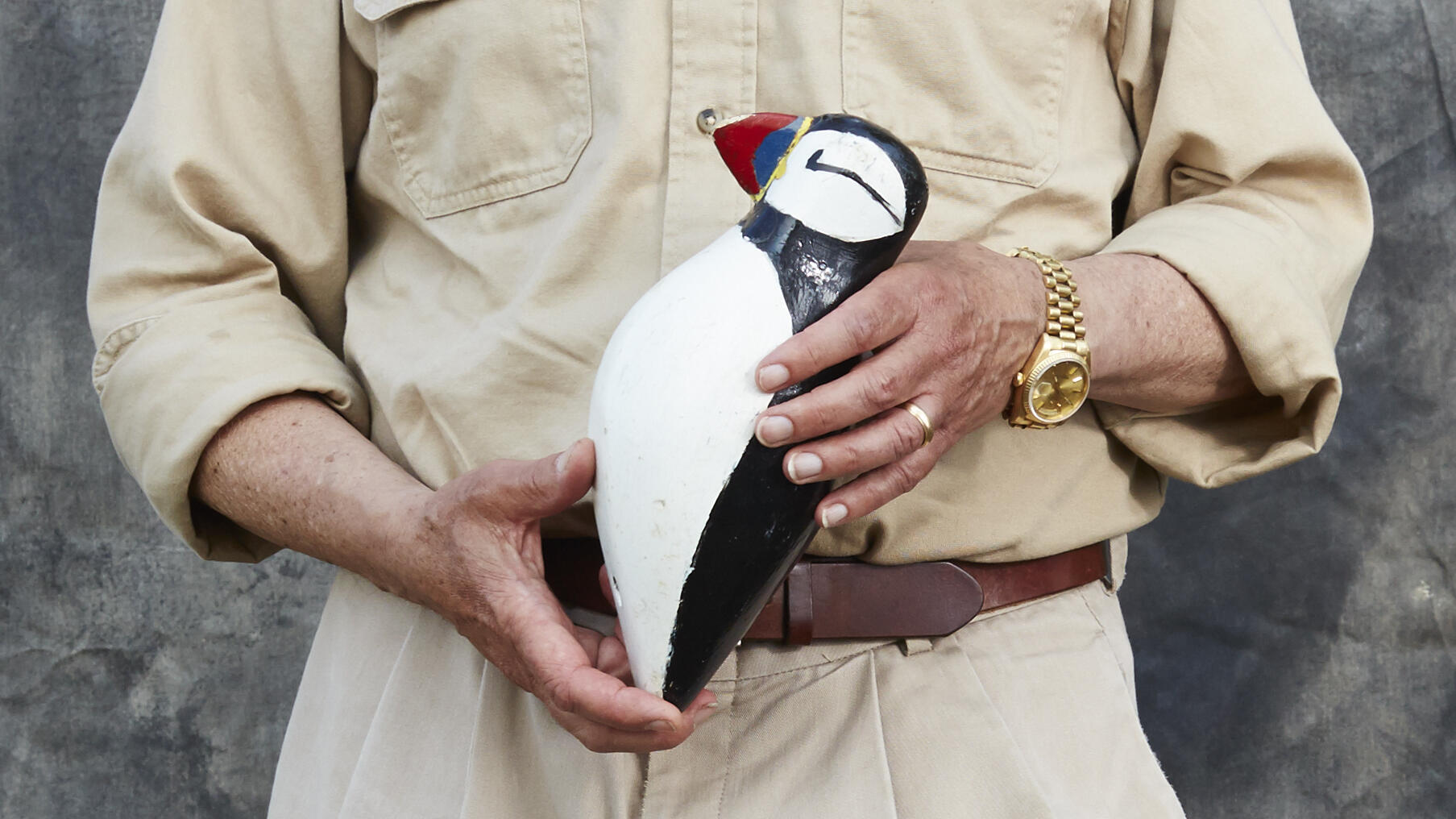 Steve Kress and a fellow researcher pass up the Fourth of July fireworks to celebrate with a bizarre-looking bird.

Excerpted from PROJECT PUFFIN: THE IMPROBABLE QUEST TO BRING A BELOVED SEABIRD BACK TO EGG ROCK. Used with the permission of the publisher, Yale University Press.​ Published April 2015. Copyright © 2015 by Stephen W. Kress and Derrick Z. Jackson. All rights reserved.

Project Puffin is a decades-long crusade to bring the Atlantic Puffin back to former nesting islands on the coast of Maine. Built from the ground up, the innovative effort was designed by Steve Kress, director of Audubon’s Seabird Restoration Program. Over the years, Kress and his growing team of researchers and interns worked against enormous odds to bring the puffins back to Eastern Egg Rock. Along the way to success, they discovered new methods for restoring seabird colonies that are now used worldwide. Read about the success of their work in Audubon's magazine story, and about their continued efforts on the Project Puffin page.

Kress joined forces with Boston Globe editor Derrick Jackson to write a book detailing both the failures and victories of Project Puffin. In this excerpt, we see Kress and a member of his team in the earlier stages of the project taking a “holiday” on Egg Rock and stumbling on something spectacular.

The Fourth of July festivities in Round Pond, Maine, in 1981 included the usual parade featuring ancient cars, marching bands, and quirky floats poking fun at politicians and tourists.

It was not especially memorable as Round Pond festivities go. But this Fourth of July changed my life. I was just a few miles away, but I might as well have been on a different continent. The way I looked and smelled would have made me an oddity on the mainland, where townsfolk counted down the hours to fireworks and tourists dressed in red, white, and blue swarmed the famous gnarly rocks of nearby Pemaquid Point. Evie Weinstein and I were perched on opposite ends of Eastern Egg Rock, a seven-acre, state-owned, treeless island six miles off the mainland. I was scrunched into a tiny, three-foot-square plywood bird blind, confined like a stuntman in a barrel about to careen over Niagara Falls.

Because we knew about all the festivities, this seemed to be an especially lonely day. A pea-soup fog cloaked the rock, preventing us from seeing the mainland and erasing any chance of seeing fireworks. Even the lobster boats that normally churned past intermittently were absent. The men and women who haul up traps containing Maine’s signature delicacy were enjoying their own clambakes along the coast, dropping fringe benefits into bubbling cauldrons.

I was in a blind we nicknamed Flagpole, because near this location we hoisted a puffin flag in the earliest days of the project. Evie was at the Egg Rock Hilton [a twelve-by-twelve-foot cabin] catching up on journal notes before taking my place in the blind. As those on the mainland celebrated the independence of a nation symbolized by the bald eagle, we were in a silent vigil, hoping to see puffins.

I had sat in the blind for five hours, from nine in the morning to two in the afternoon, and I was ready for a break. All I had to show for my time was strained eyes. Nothing emerged from the fog. As if to amplify that this was another fruitless stint, rain and a chilling wind blew in from the northeast just as I tucked my weathered seat cushion into the bucket that sufficed for my chair in the blind. I bent low to slip out the door of the blind and worked my way over the boulders to-ward the Hilton.

I was thinking about what canned food to throw together for a late lunch when Evie exploded out of the fog toward me from her end of the island. She was waving her arms in the contortions of a cartoon traffic cop signaling everyone to proceed simultaneously in all directions. Her whirling limbs prevented her from talking, let alone shouting. What could this be about, on this otherwise grim, almost lifeless day? What could she have seen that shattered the tedium, shocked her into pandemonium?

Breathless with excitement, Evie explained that she had been collecting seawater for washing dishes when—like an apparition—a puffin emerged out of the fog and buzzed past her carrying the loveliest fish she had ever seen! She noted with precision in her field journal that this had occurred three and a half hours before, at 10:36 a.m. She went on to explain that the puffin was flying directly toward my blind.

The sight of the puffin with fish draped out of its beak was so surprising that she had dropped the bucket of water and was torn between dashing to tell me and not wanting to disturb my stint or the puffin’s flight. So she raced back to our tiny camp with the urge to tell someone about her most amazing vision! She had thought to wave down the first lobster boat to come by, but they were not to be found on this foggy holiday.

Evie broke protocol because the news was so big. Later she recalled, “It just seemed so impossible, I had to tell somebody! I was so hysterical that when I got Marge on the radio, she asked if it was an emergency. I said ‘No, no, no!’ and then I launched into one-word sentences: ‘Puffinwithfishinitsbeak! PuffinbabiesonEasternEggRock! IgottatellsomeonesoIcalled youfirst!’”

Marge responded patiently, “That must have been cool.” After she ended the call with Marge, Evie said, “After I got off with Marge, I was hopping around like a goofy kid.”

We rushed back to the cabin to focus our Questar on the south end of the island. This was a powerful birding scope on loan for the summer, a far more precise tool than binoculars. Evie was absolutely sure of what she saw, but several hours passed with no new sightings. Afternoon became evening. Then at 7:40 p.m., with the Questar scanning the south end of the rock, a puffin sliced out of the fog with its beak packed full of silvery fish. It scrambled over the rocks, then disappeared into a crevice! Fifteen minutes later, it popped up from the crevice, with no fish.

We watched in wonder as it hopped onto the rocks and paused near another puffin that appeared to be standing guard. Perhaps it was a mate. The puffin that had come with the fish flew away, most likely to find another meal. One more time, twenty-five minutes after that, as daytime gray faded to night black, the feeding puffin repeated the performance, delivering more fish. We were beside ourselves with joy! The delivery of fish meant only one thing—there was certainly a tiny, fuzzy chick somewhere deep in the granite boulders.

While the faint boom of fireworks cut through the fog, I reflected on the past hours. This was the day we had experienced a thousand times by dream, but seldom mentioned, for fear it would somehow jinx the experiment. We had seen a puffin with fish in its beak buzz Eastern Egg Rock two years before, with no proof it ever landed, let alone had a chick. But now we had the best proof we could have that after almost a hundred years of absence and eight years of working toward this goal, puffins were again nesting on Eastern Egg Rock. A Fourth of July celebration I would never forget.

Evie’s three words, “Puffin . . . with fish!!!” were the three most important words of my career. That Atlantic puffin with those fish, represented something that had never been accomplished before. For the first time, a seabird was restored to an island where humans had wiped it out.