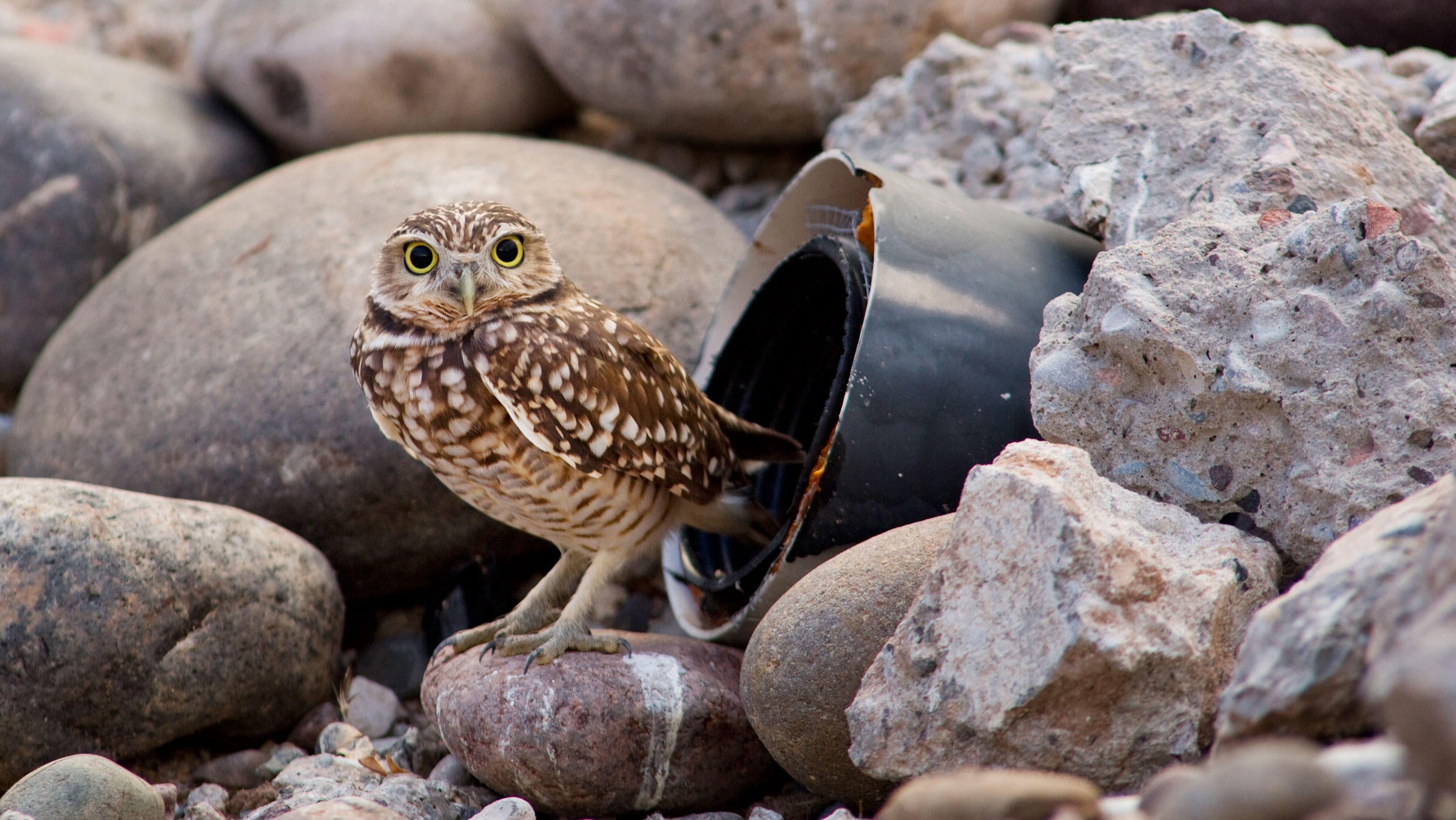 A Burrowing Owl outside of its underground shelter at the Rio Salado Habitat Restoration Area near downtown Phoenix. Photo: Nick Cote

Thanks to a crowdsourced protection effort led by Audubon Arizona, the owls are once again thriving.

The story of how the Burrowing Owls lost their home is all too familiar: As manufacturing industries took off after World War II and construction machinery plowed through Phoenix, Arizona, the arid landscape transformed into one of America’s fastest growing cities. The owls’ habitats and nests—mammal-dug holes on dirt stretches—vanished as development projects arose in their place.

But now the owls are back.

Today, on an Arizona landfill transformed into 600 acres of protected land, visitors can stroll alongside more than 100 Burrowing Owls as they eat, breed, and bob their heads “howdy” across the earthen sprawl of the Rio Salado Restoration Habitat. Since 2013, owls have been rescued and relocated here through the Downtown Owls project, a collaboration between Audubon Arizona, the Wild at Heart raptor sanctuary, and the City of Phoenix, with funding from a Toyota TogetherGreen grant. The goal of the project is to protect the species by getting citizens—no matter their scientific experience—to build makeshift owl burrows and map owl sightings through a phone app.

As the owls started to make the landfill their new home, finding a way to track them and their offspring became important. Work on the app began in 2014, when Cathy Wise, project leader and Audubon Arizona’s education director, teamed up with GIS specialist Connor Bailey to devise a way to let volunteers easily map their owl sightings on Rio Salado. Since then, armed with a smartphone or a tablet, volunteers have been observing and mapping the rescued owls across five safe sites, designated by criteria such as openness and lack of large vegetation to obscure predators. Wise estimates around 50 people, including regular volunteers, have contributed data. Age is no hindrance: Classes from three schools, including an Advanced Placement biology class, have gone on Downtown Owl field trips during which students learned to identify the owls and mark sightings on the app.

Stemming from these efforts are preliminary observations about the rescued owl population. Wise says one of the safe sites appears to be the most popular—home to twelve owls when two to six is more typical. But when it comes to validating and making conclusions from observations like these, she points out the initial mapping system was not designed to address more specific questions. “We set the project up to be extremely simple,” she says. After all, at the time of the app’s inception, no one was sure how the rescued owls would fare or behave in their new habitat.

While Wise says it has been “a great first step, in terms of getting people engaged in citizen science,” she also says it is becoming clear there is a need for a more refined research strategy.

“One of the things we’re missing is negative data,” she says, explaining how volunteers might spend an hour in the field without seeing an owl, but would not be able to record that in the current app. She is also looking into banding the owls with unique colors so that volunteers can study individual owls and avoid counting the same owl twice. She is in contact with a GIS specialist once again, brainstorming news way to improve the app.

As Downtown Owls celebrates three years of progress—with the hundredth rescued owl released this past April and spring cameras documenting at least nine owlets—it feels like ripe time for the next step.