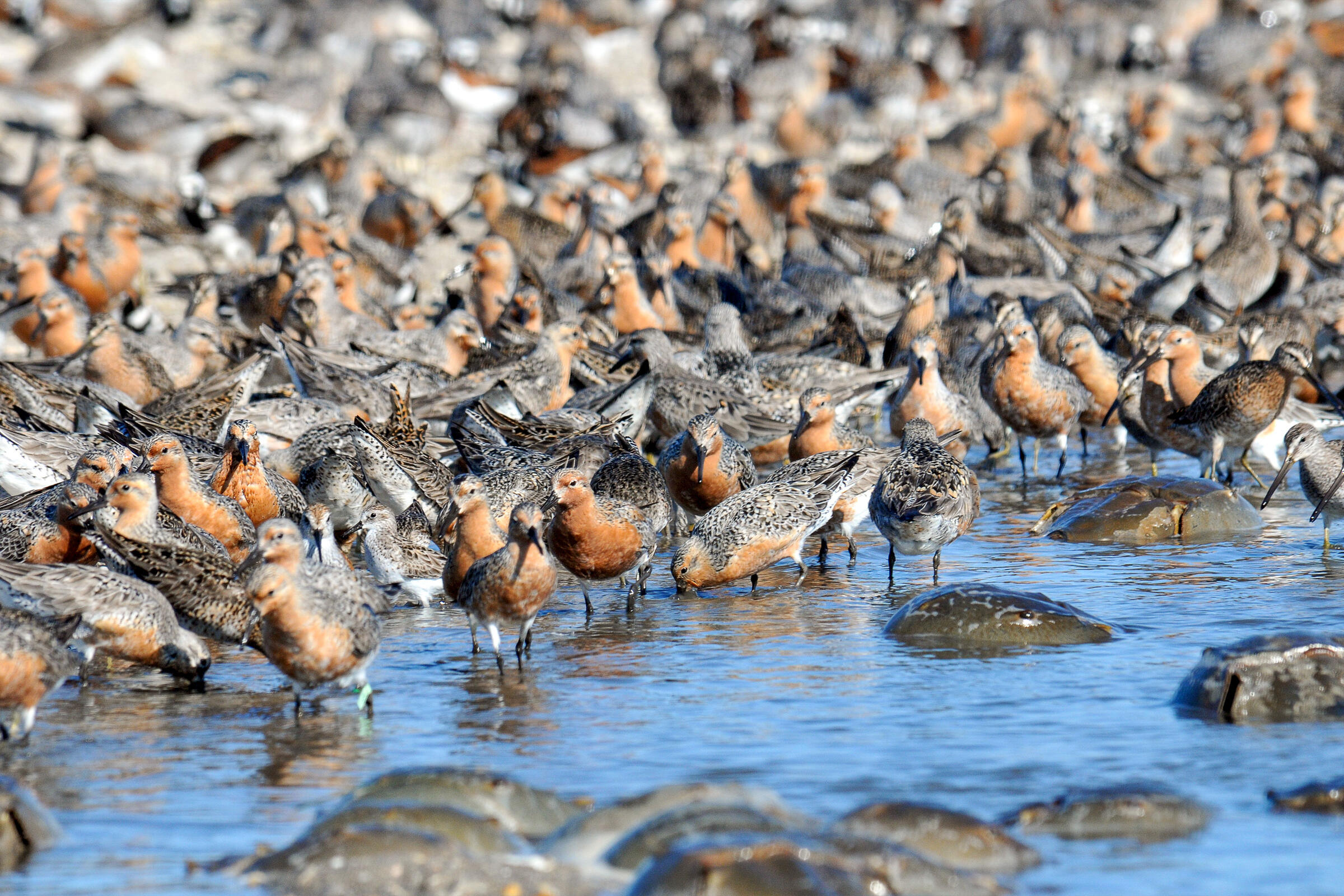 Vaccine production requires the blood of horseshoe crabs, whose eggs are a vital food source for several species, including Red Knots. A synthetic replacement for the blood exists, but the United States is stuck in the past.

In the past few weeks, a couple of updates from the pharmaceutical industry provided some highly anticipated good news about the COVID-19 pandemic. First, on November 9, the drug company Pfizer announced that it had seen exceptional results in early clinical trials of a potential COVID-19 vaccine. The vaccine candidate, which Pfizer developed with the German company BioNTech, has proven effective in 95 percent of trial participants, with no significant safety concerns. And on November 16, Moderna announced that its own vaccine candidate had achieved 94.5 percent efficacy in early trials.

Both vaccines have the potential to be crucial tools for fighting COVID-19, which has so far killed more than a quarter of a million Americans and is poised to kill thousands more with U.S. infection rates currently on the rise. But while they could save millions of human lives, Pfizer’s and Moderna’s vaccines may end up having consequences few people realize; the surge in vaccine production and testing could affect migrating shorebirds, especially the threatened rufa Red Knot. That’s because both the birds and the pharmaceutical companies depend on the same animal: the horseshoe crabs of the Delaware Bay. Horseshoe crab eggs are vital fuel during the Red Knots’ annual 9,000-mile migration from Tierra del Fuego, at the southern tip of South America, to the Canadian Arctic every spring. For the drugmakers, horseshoe crab blood is a vital component in vaccine production.

As things currently stand in the United States, producing vaccines and other treatments that need to be injected into the bloodstream requires sticking needles into the hearts of horseshoe crabs and draining them of around a third of their blood, which is the only natural source of limulus amebocyte lysate, or LAL. Pharmaceutical companies use LAL to test their injectables for a bacterial contaminant called endotoxin, which can be deadly if even minuscule quantities make their way into the bloodstream. In a normal year, pharmaceutical companies conduct an estimated 70 million endotoxin tests. 2020, however, is by no means a normal year. “There are so many vaccines and therapies in development all at once for COVID-19,” says Jay Bolden, senior consultant biologist at the pharmaceutical company Eli Lilly. “I don’t see how it wouldn’t lead to an increase in the need for endotoxin testing.”

Conservationists are worried the added stress on an already weakened crab population could lead to the production of fewer horseshoe crab eggs and, as a result, malnourished Red Knots. They had put their hopes in a new endotoxin test, championed by Bolden, that doesn’t require horseshoe crab blood—a Holy Grail of sorts for addressing this conflict between wildlife conservation and human health. This synthetic alternative, called recombinant Factor C (or rFC for short), is just as effective at detecting endotoxins as LAL, Bolden says. But regulatory hurdles, especially in the United States, are keeping the pharmaceutical industry from switching over.

The horseshoe crab-vaccine conflict has been well known and studied for decades. Studies show that anywhere between 5 and 30 percent of horseshoe crabs that are bled for biomedical purposes and then released back to the ocean die, and conservationists suspect crabs that have been bled and survive the process don’t produce as many eggs as they normally would. “In the 1980s and early 1990s there were about 50,000 eggs per square meter” in Delaware Bay, says Larry Niles, a shorebird biologist and partner at Wildlife Restoration Partnerships, which works on restoration projects along the Red Knot’s migration route. Now, Niles says, as a result of crab harvesting for bait and biomedical bleeding, there are only about 8,000 horseshoe crab eggs per square meter of sand. That’s had significant, observable impacts on birds. “Shorebird populations declined because they basically came down to the level that the Delaware Bay could support,” Niles says. Following the trends in their food source, rufa Red Knot numbers in the area plummeted from about 100,000 in the 1990s to around 12,000 today, which prompted the U.S. Fish and Wildlife Service to list the bird as threatened in 2015.

As word of this conflict spread, it eventually reached Bolden’s ears. Bolden, who is both a birder and a pharmaceutical scientist, spearheaded an effort to switch Eli Lilly’s testing from the crab-derived LAL to the synthetic alternative or rFC. (Read the full story of that effort.) His goal, and that of other proponents of rFC, was to get the compound formally accepted by the world’s pharmacopoeias—regulatory bodies that set rules for drugmakers—to show that it works just as well as LAL. To that end, with Bolden's help Eli Lilly brought two medicines—the migrane drug Emgality (galcanezumab-gnlm) and the diabetes drug Lyumjev (insulin lispro-aabc)—through rigorous FDA approvals and then to market using an rFC-based test, bolstering the case that rFC is a safe alternative to LAL. That and other data helped convince the pharmacopoeias in Europe, China, and Japan to accept rFC as a replacement for LAL, clearing the way for more widespread adoption.

But the United States is dragging its feet. Earlier this year, there was hope that the U.S. Pharmacopoeia (USP) would publish new guidances that accepted rFC as an equivalent for LAL. But the USP backpedaled in May, citing stakeholder feedback and a need for more study.

"That is so odd,” says Walker Golder, who represents Audubon on the Horseshoe Crab Recovery Coalition, a conservation group that aims to curb crab harvests for the benefit of the crabs and the various birds and marine animals that rely on them. “The European pharmacopoeia has recognized that rFC is an equivalent alternative. The Japanese and Chinese equivalent bodies have also reached the same conclusion. The USP, though, has not.”

Drugmakers, Bolden explains, are reluctant to immediately embrace new technologies out of fear for patient safety. In 2012, for example, the U.S. Food and Drug Administration (FDA) allowed pharmaceutical companies to test their products for endotoxin using rFC—but only if they also tested it with LAL. The FDA was essentially telling drugmakers that rFC might be as effective—and therefore as good at ensuring the safety of their patients—as LAL, but drugmakers ultimately had to demonstrate that by applying for approval on a case-by-case basis. Few companies aside from Eli Lilly were willing to devote the resources needed to make that happen or take the risk, even though numerous studies have shown rFC is just as safe and effective as LAL.

“The slow pace of change in the pharmaceutical industry is by design,” Bolden says. “But for this particular issue, we have the science to back it up. We just wish it would happen a little faster.”

Until it does, pharmaceutical companies—including Pfizer and Moderna—will be reluctant to adopt rFC-based tests, which means COVID-19 vaccine development will require horseshoe crab blood. (Neither company responded to questions about endotoxin testing for their COVID-19 vaccine products.) An antibody treatment developed by Eli Lilly and recently given emergency authorization by the FDA, however, is a different matter: Like anything else the company produces, it will be tested and brought to market using rFC.

The pharmaceutical industry insists the increased demand for LAL won’t cause any risk to horseshoe crabs. According to Allen Burgenson from the Swiss biotech company Lonza, which bleeds Atlantic horseshoe crabs for LAL and also produces rFC, testing an estimated 5 billion doses of a potential COVID-19 vaccine would require 12,000 vials of LAL, or less than a day’s worth of combined lysate production for the three major manufacturers. But conservationists are skeptical of the company’s calculations. “That number is based on the viability of a wild population of animals that’s under duress,” says David Mizrahi, vice president of research and monitoring at New Jersey Audubon. The Delaware Bay horseshoe crab population, Mizrahi points out, still hasn’t recovered from a crash in the 1990s caused by over-harvesting for bait fishing and biomedical bleeding. In September, a coalition of 132 organizations, concerned about how COVID-19 vaccine production might affect horseshoe crabs, sent a letter to FDA Commission Steven Hahn pushing for faster adoption of rFC, but received no response.

Regardless, it’s now likely too late for rFC to move off the proving grounds and into standard pharmaceutical practice in time to manufacture a COVID-19 vaccine. “Once an industry says they need something,” Niles says, “nothing stops them.” Ending the pandemic is the priority right now. But, he points out, it’s a gamble to keep relying on the crabs: Sooner or later, there might not be enough of them left. “There’s a lot of factors affecting crabs,” Niles says. “None of them are good.”