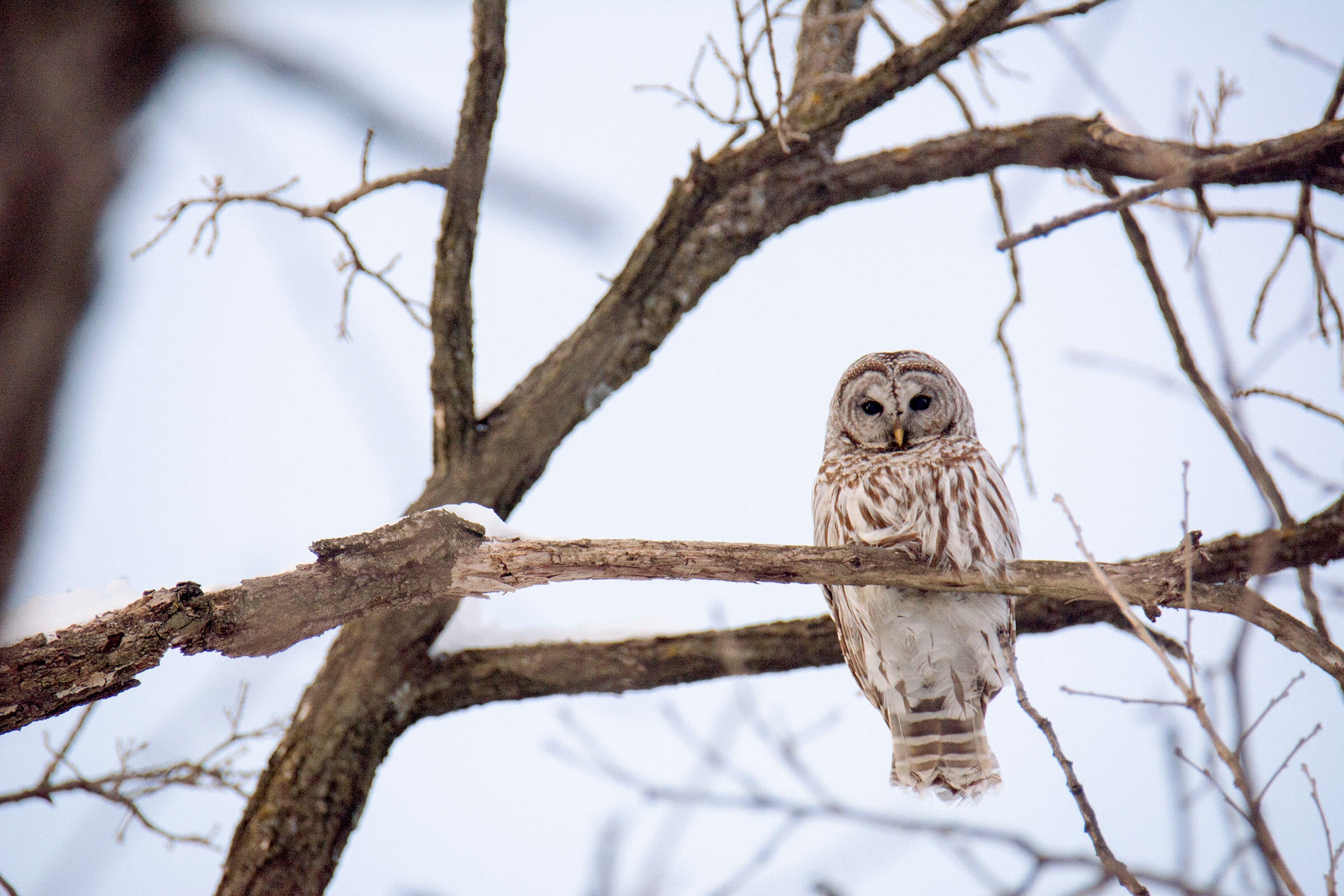 Is the Mothman of West Virginia an Owl?

More than 50 years after the first sighting, the best explanation for the infamous cryptid might be a nocturnal bird of prey. Audubon investigates.

On November 15, 1966, a pair of young couples took an evening drive down a lonely road on the outskirts of Point Pleasant, West Virginia. Their route took them through overgrown bunkers of the “TNT Area,” the remnants of a WW2 munitions plant. There the headlights glanced off something in the dark: a six-foot-tall, man-shaped thing. Shining red eyes stared back at them from a body without an obvious head or neck. Spooked, the couples sped away, only to see the thing following them on silent, unmoving wings.

The encounter in Point Pleasant was the first sighting of what local news dubbed “the Mothman," one of America’s most enduring cryptids. Throughout the following year the town was rocked with a welter of sightings—some honest, some the product of likely hoaxes. Even after the local frenzy subsided, Mothman proved popular with the UFO and cryptozoology set, and hit the mainstream with the 2002 film The Mothman Prophecies. Its partisans maintain that it is an alien, a prophet of doom, or an extra-dimensional spirit monster heralding the Age of Aquarius.

Yet according to Joe Nickell, an author and investigator with the Committee for Skeptical Inquiry, the original Mothman likely owes its existence to a more mundane—though no less interesting—culprit: an owl. How a nocturnal bird became an extra-dimensional entity reveals a little bit about human nature and lot about a bird that seems custom-made to give humans the chills.

Nickell grew interested in the Mothman case after looking into the similar Flatwoods Monster, a hissing 1952 apparition that terrified a family with its staring eyes and outstretched claws. Nickell identified the fiend as a Barn Owl, and suspected that the Mothman might be as well. “I think to do this, you have to take people at their word,” he says. “You take people’s description—allowing for some error—and match it to a real animal in the real world.”

The idea that Mothman was some sort of bird had been floated during the initial flurry of sightings, Nickell says. A group of firemen who went out to the forest to investigate reported seeing a large unidentified bird, and a local man shot a large Snowy Owl, which he maintained had been the source of the trouble. (This was a more likely identification than that of contemporary ornithologist Dr. Robert L. Smith, who blithely dismissed Mothman as a Sandhill Crane, ignoring the fact that the species isn't native to West Virginia and the creature reportedly had no neck.)

Barn Owls seemed likely to Nickell in part because they are already considered eerie. According to Ryan Barbour, a researcher with the Barn Owl Project, they famously like to roost in old and abandoned buildings, they have an unsettlingly odd appearance, and their vocal repertoire is heavy on hisses and clicks. In South Texas and Mexico, where part of Barbour’s family is from, Barn Owls are lechuza, shape-shifting witches that foretell foul fortune. “Some of those who’ve declined our invitation to come out and do fieldwork with us are actually bird biologists,” Barbour says. “They say that owls, especially Barn Owls, freak them out.”

There were other reasons to think an owl of some sort was the culprit.

There were other reasons to think an owl of some sort was the culprit, Nickels says. The Mothman’s shape as originally reported is very owl-like, with a head and body that blended together. Yet as Nickell investigated, he became less convinced that a Barn Owl was the answer. Linda Scarberry, one of the women in the original car, had reported seeing huge, glinting red eyes in the car headlights, a description backed up by following sightings. That sounded like the product of eyeshine, a feature found in nocturnal animals like dogs, cats, alligators, and, yes, owls. But there was a problem, Nickell says: Barn Owls have a relatively weak eyeshine, likely too weak to account for the haunting red eyes attributed to Mothman.

Luckily, there was another candidate available: the Barred Owl, a large species with a rounded head, deep black eyes, and a loud, deep hoot that echoes through the dark. They prefer hollows in old trees and open forests, and are common throughout the southeast. Officials in the former “TNT area”—now the McClintic Wildlife Management Area—confirmed to Nickells that a healthy population of Barred Owls live on the refuge. Most importantly, Barred Owls have a dramatic crimson eyeshine due to the amount of blood vessels around the eye.

To Nickells, the bird sounded like a match for the Mothman. “We know that Barred Owls exist,” he says. “We know they were in the McClintock WMA. We know that they have crimson eyeshine and otherwise fit the description, big-winged and so forth, with silent flight. The assumptions you’d make for the other hypothesis is that there are extraterrestrials, that they're able to come to the planet Earth, and that they have creatures that look for all the world like a Barred Owl.”

But how do you go from a 17- to 20-inch owl to a six-foot eldritch horror? In a 2010 episode of the television show MonsterQuest, Nickells drove volunteers down a dark road lined with plywood Mothmen, complete with bike reflectors for eyes. None were able to correctly guess the size of the cutouts. “It’s very hard to judge the size of something seen at night at an unknown distance, and if you misjudge how far away it is, you misjudge its height by the same proportion,” Nickells says. Frightened people also tend to fixate on the object of their fear, causing it to loom larger in their memory. Taken together, it’s easy to see how an unexpected encounter with a Barred Owl could be a memorable—and potentially terrifying—experience.

A certain amount of natural exaggeration and outright revision also seems to have followed the original spate of Mothman encounters. Paranormal writers played up the otherworldly aspects of the sightings, reinterpreting and reshaping the legend to suit their needs. Current artistic interpretations of Mothman often cast it as demonic or, more understandably, insect-like. A statue of Mothman now stands in Point Pleasant, with large, clawed arms, bulging eyes, and horns. “There’s a process of legend-making,” Nickell says. “It’s interpreted and reinterpreted and eventually they take it to new heights. But you look at the figure in Point Pleasant, and to me it’s a far cry from what Linda Scarberry saw.”

If anything, Mothman is a testament to the way that a fleeting glimpse of a common bird can expand into something nearly unrecognizable, given the right circumstances. Owls seem particularly prone to this sort of metamorphosis, Nickells says. He’s worked on several such cases, including the Flatwoods monster, the Kelly Kentucky Goblins, and numerous ghost stories. “They've almost certainly been responsible for monster sightings, maybe more than any one creature,” Nickell says. “Because of their size, and their shining eyes, and their nocturnal habits and noiseless flight, they're really noted for fooling people.”

Look at an owl, in other words, and you aren’t just looking at a nocturnal bird of prey: You can be looking at an apparition, a creature from folklore, or even a shape-shifting witch. All it takes is a fleeting glimpse, a rush of adrenaline, a flash of reflective eyes. Because owls exist, some of our favorite supernatural horrors exist, too—every forest with its own Mothman, dozing in trees during the day, hunting mice and voles at night.

Don't be fooled! Not sure if you're looking at a Mothman, a Barn Owl, or a Barred Owl? Audubon's free Bird Guide app can help (with the last two).