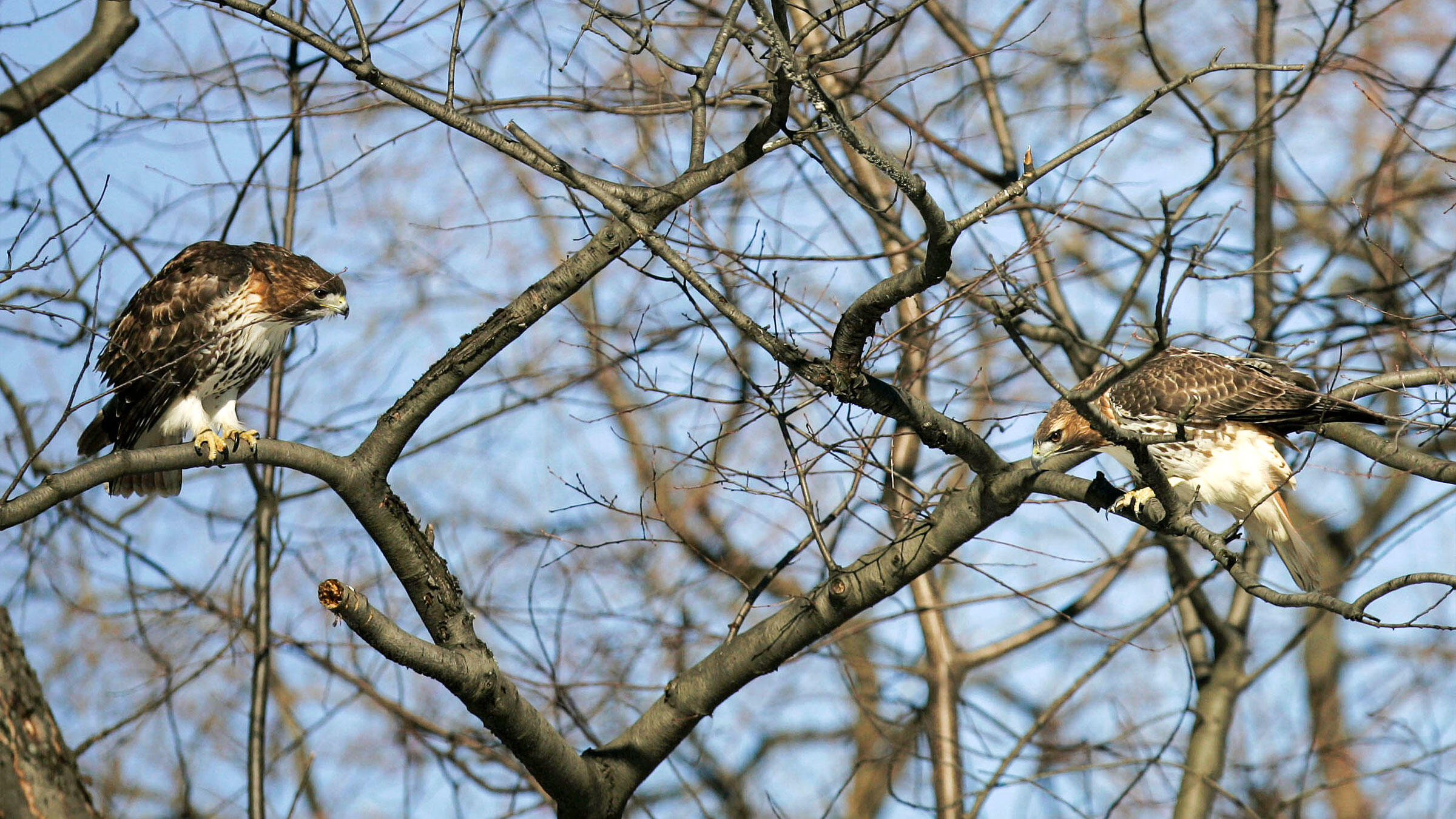 Most Female Raptors Are Bigger and Stronger Than Males, but Why?

Despite many scientific studies, there's still no consensus on why this disparity exists in birds of prey.

Canaan steps confidently onto my glove. The audience—it could be schoolkids, college students, or members of a nature club—waits quietly to see what kind of bird will emerge. As I move into view with the hawk perched on my fist, everyone sizes up Canaan and gasps. “Is that a Golden Eagle?" someone calls out. "I think it’s a Red-tail, but I’ve never seen one so big.”

Yes, she’s a Red-tailed Hawk—a female. Like in most raptors, the female Red-tail is larger than the male. That’s because (I often add) females are better. Half the audience laughs; half groans. I’ve used this line hundreds of times while introducing wildlife ambassadors from the Avian Conservation Center of Appalachia in West Virginia, and I never get tired of it. (Neither does my audience, or so I'd like to think.)

In a way, though, it’s true. Hawks, owls, falcons, and eagles are among the strongest, fastest, most dynamic birds on the planet—and in almost every case, the female of the species outweighs the male. Canaan weighs more than three pounds, which is especially massive, even for a female Red-tailed Hawk. The male Red-tails we admit for rehab are usually closer to two pounds.

This is unusual for birds; in most species, the male outweighs the female, often because he spends so much time brawling and competing with other males. But despite many scientific studies on the subject, there’s no consensus on why the pattern is flipped for raptors.

One hypothesis holds that if females and males are different sizes, members of a pair won’t compete with each other for food. In other words, a female Red-tailed Hawk might hunt for rabbits or squirrels, while her mate chases down bite-size mice. This non-compete angle makes sense at first—except it doesn’t explain why the female is larger. Each partner would still hunt different prey if the sizes of the two sexes were reversed, so the explanation is incomplete.

Another proposal states that larger females can better outcompete other females for territories and mates. This also allows them to dominate smaller males and protect themselves from aggressive or demanding partners. Still, in many raptor species, males compete for mates as well. So, no perfect premise yet.

The most convincing argument, in my opinion, has to do with a female’s ability to defend her nest against predators like raccoons, crows, and other raptors. The female usually spends more time incubating eggs and rearing chicks than her male partner, and if she’s bigger she might be able protect her young (and herself) more effectively. The male, on the other hand, might share some nest duties—but for the most part he’s out hunting food for his mate and to-be offspring. Smaller prey items are easier to come by than larger creatures, so his compactness allows him to bring home more goods.

Unfortunately, Canaan the Red-tailed Hawk never got to use her dimorphism perks in the wild. She was gravely injured—shot with a rifle bullet—before she was a year old. She never had a mate, eggs, or chicks to protect. But she's settled into her role as wildlife ambassador very well, exuding calm confidence at programs. At home during feedings, she often clucks softly to me, one foot tucked up under her feathers, brown eyes focused on the dead mice in my hand. In all her might and mass, she’s powerful, self-assured, and endearing.

The weight difference between female and male bird-eating raptors, such as Peregrine Falcons and Cooper’s Hawks, is even more dramatic than what we see in Red-tails. The non-releasable female Peregrine in our care, Tundra, is one of our most popular birds. Outgoing and vocal, she squeaks at delighted children and has a voracious appetite for two-week-old quail chicks. Tundra typically weighs a little under two pounds, while a male of her species might weigh one-third less. In fact, falconers call male Peregrines tiercels, which comes from the Latin word for “third.”

But the biggest mismatch might be between female and male Cooper's Hawks. Striker, our non-releasable female Cooper’s (nicknamed Fluffy Pants by our volunteers), weighs close to a pound. But a male, as mentioned before, can weigh as little as half of that.

Between Striker, Tundra, and Canaan, my crew of fierce birds of prey runs deep. Still, after I tell my audiences that female raptors are better, I’m quick to explain that no one knows for sure why the disparity exists. Whatever the reason (or reasons), it’s an anomaly within the bird world and across most of the animal kingdom. Are female raptors “better” than their male counterparts? In a biological sense, of course not. Both sexes are strong, fast, charismatic, and have a vital role in their respective ecosystems. For the females, that means killing larger prey, defending their turf, and protecting their young.

By the time I put Canaan away, she’s impressed everyone in the room. Hopefully, by getting to know her, the audience learns what female raptors are capable of. In my eyes, at least, she isn’t just better. She’s the best.

Hello. Audubon is a nonprofit, and stories like this are made possible by readers like you. To support our work, please make a donation today.