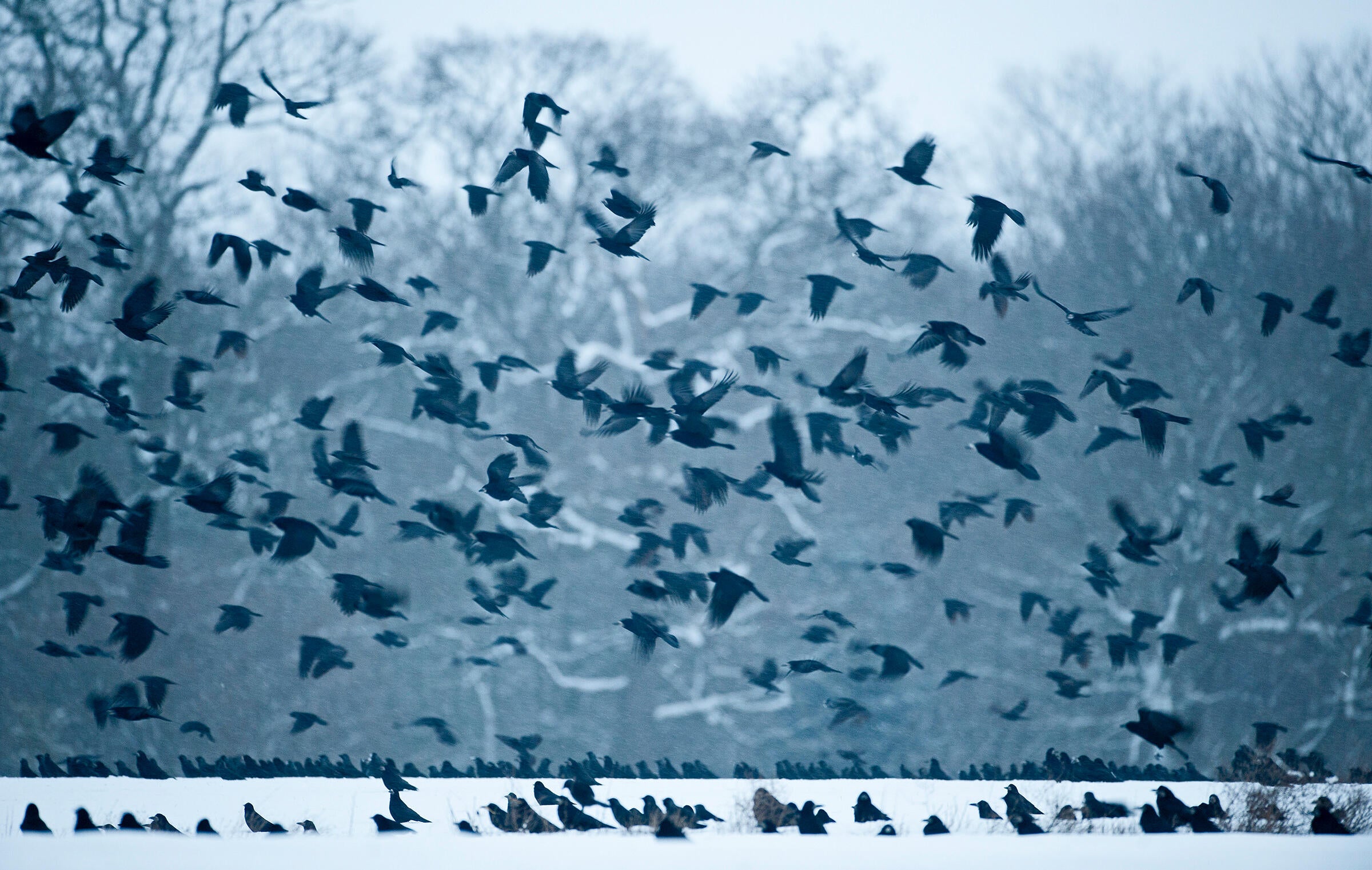 A group—not a murder— of Carrion Crows (and Rooks) in Norfolk, England. Photo: David Tipling/Alamy

No, It’s Not Actually a Murder of Crows

Okay, technically it is, but we should still abandon absurd—and antiquated—terms of venery.

I made that last one up, but how would you know?  As familiar as they are, these little nicknames for groups of animals—terms of venery, if you want to get fancy with it—are supposedly delightful quirks of the English language.

Annoyed because, as a lifelong birder, I’ve never once used “parliament” for owls or “murder” for crows or anything of the sort.  Or heard anyone else use them.  A group of birds—any birds— is a “flock.” A group of cows is a “herd.”  Other than that, I just don’t see enough groups of other animals to need more words.

I needed to know: Are there actual people in the real world who use special group names for certain species? Or is there just one nerd in an office somewhere with a field guide in one hand and a dictionary in the other, matching each species with a cute little term and laughing maniacally when the world collectively coos over the pairing?

I needed to ask those closest to the source. I needed to talk to some scientists.

Have you ever referred to a group of vultures as a “venue”?

Have you ever used the term “chain” for a group of bobolinks?

Have you ever called a group of woodcocks a “fall”?

Jake Walker, studied woodcocks for his master’s thesis at Trent University, Ontario: “I sure as hell would never say it, nor have I heard it said.”

Do you ever use the term “rhumba” of rattlesnakes? “Congress” of salamanders? “Bask” of crocodiles? “Generation” of vipers?

Dr. David Steen, reptile expert, Auburn University: “I’ve never used any of these and would have no idea what someone was talking about if I heard them.”

Do you ever refer to a group of wombats as a “wisdom”?

So it’s clear that scientists do not use terms of venery. These things exist in a world of their own, where bar trivia is king.  And I mean, trivia is important and all, but without real-world applications, aren’t these just morsels of linguistic candy rotting cavities into our scientific integrity?

Okay, fine. Maybe an investigation into the origins of the terms is warranted. After all, these dumb names must have come from somewhere, right?

They did—the Middle Ages. The earliest known collection of terms of venery (an archaic term for “hunting”) is in the Book of Saint Albans, a kind of handbook on manliness first published in 1486. Included among chapters on “hawking” and “the blasing of arms” was a list of “the Compaynys of Beestys and Fowlys,” where many of our common terms of venery made their first appearances.  “Pride of lions” is in there, along with a “flock of sheep” and “herd of deer.”

I’ll admit that it makes sense for hunters to employ these terms. They’re out looking for groups of different kinds of animals, and I suppose I can envision a scenario in which it is more efficient to use unique terms for each set of creatures. But that logic falls apart in other parts of the list, which weren’t about “beestys” or “fowlys” at all.  A “doctrine of doctors” is in there. So is “a state of princes” and an “execution of officers.” I understand that the Middle Ages were a pretty rough time, but you can’t tell me people were out there hunting groups of princes.

Terms of venery are, and always have been, whimsy. They’re a lark (and a whole list of such terms is, therefore, an exaltation of larks), applied at one time to groups of commonly-hunted animals but then extended for fun to groups of people, and to creatures, like the wombat, who are only found in wisdoms when they’re packed into a zoo.

Now I will concede that certain terms of venery have made the transition from factoid to actual phrase. Pod of whales. Troop of monkeys. Gaggle of geese. Pack of wolves. Those tend to be used for animals that naturally live in small groups, and those are fine. Keep ‘em.

They’re not the ones that annoy me. But “murder of crows,” and the like—the ones that people giggle over despite no actual instance of anyone using the term to refer to a flock of crows maybe ever in history—those need to go.

Accuracy is part of the reason. Bandwidth is another. Why use our limited brain space on fake animal facts when there are so many interesting things that are actually true? Wombats don’t form wisdoms, but they poop cubes. Did you know that? Cubes! You’ll blow them away at bar trivia with that one.

So, let’s ditch the dead weight and stick to what’s true. The next time someone gives me a wink and a nudge and says, “Did you know a group of owls is called a ‘parliament’?” I’m going to respond, “Did you know anyone who believes that is part of a ‘gaggle of gullibles’?"