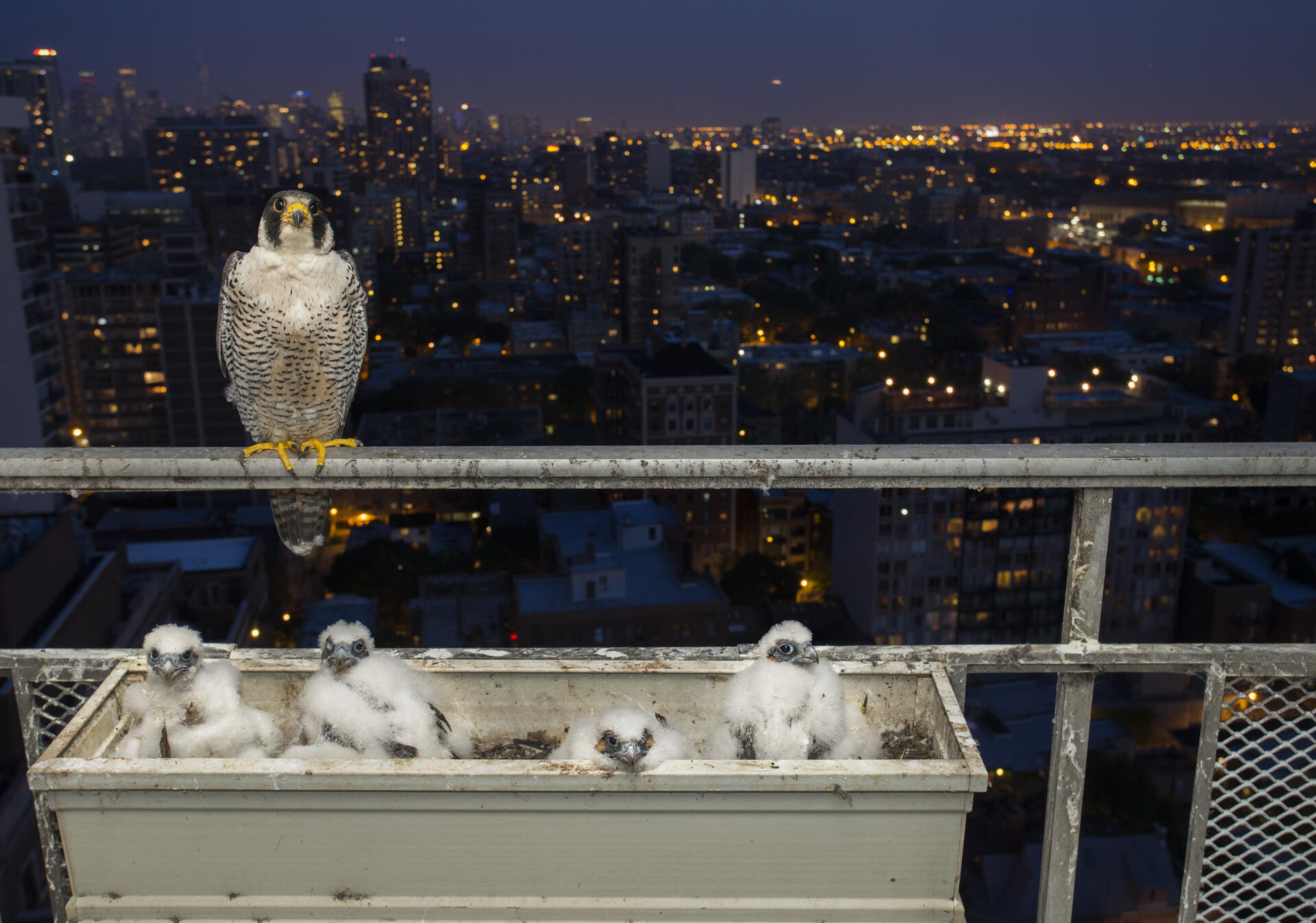 A flower-box nest provides the perfect opportunity for some close-up shots of a plucky falcon family.

Update, March 2016 — Steve and Linda are back! This year, Luke Massey is returning to Chicage in hopes of making a documentary. Donate to that project here.

In the spring of last year, a Peregrine Falcon began visiting Dacey Arashiba’s condo balcony in Chicago’s Lakeview neighborhood. Counting himself lucky, he began documenting the bird with photos and video, and he happened to be filming on April 3 when a second peregrine swooped in. “Holy crap!” Arashiba exclaims on the tape, “there are two of you?” There were indeed—a pair looking to procreate. Apparently, the 28th-floor flower box was the perfect love nest. (“I hadn’t replenished the dirt in a few years,” admits Arashiba, an IT consultant who moonlights as a comedian and singer.)

A delighted Arashiba named the birds Linda and Steve after the classic Perry rockers, the (unrelated) lead singers for 4 Non Blondes and Journey, respectively, and so began a chatty, weeks-long human–raptor cohabitation. Arashiba’s footage often catches him greeting his two amigos—“Good afternoon to you, too”; “Morning”; “It’s a bit windy today, isn’t it?”—who, for their part, largely ignore him. They seemed primarily interested in each other, calling out frequently with their loud eechup courting call.

Unfortunately, all that noisy inter-avian propositioning irritated other condo owners, as did the copious amounts of bird poop raining down around them. After fielding numerous complaints, the building manager decided that the birds had to go. “And that was it,” Arashiba says, “for a while.” 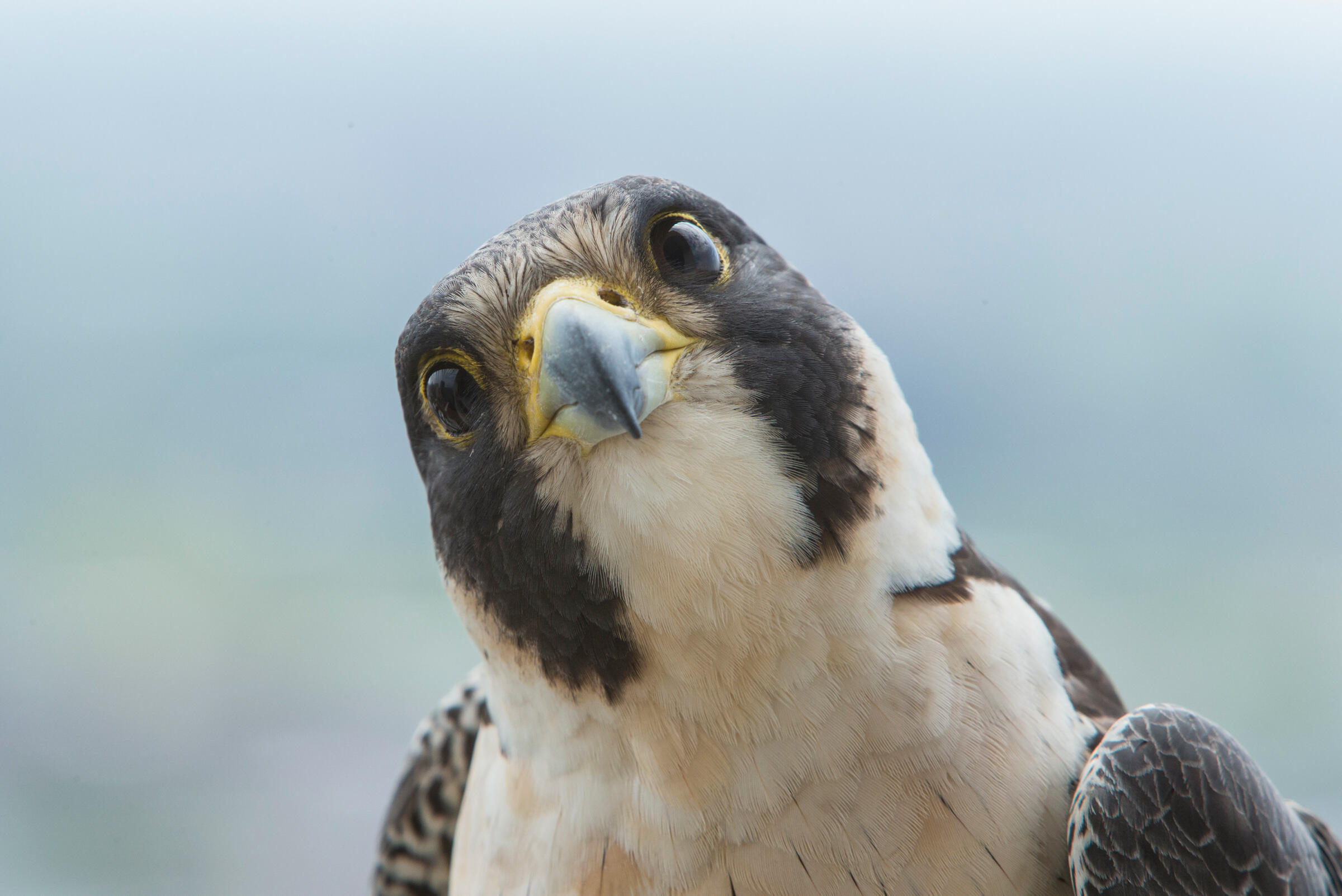 Within two months, though, Linda and Steve were back. “I kept my mouth shut and told the peregrines to do the same—not that it did any good,” Arashiba says. Then, on May 29, an espresso-colored egg appeared in the flower box. Then two. Then three. Now it was serious; Arashiba turned to Google. His “Peregrine Falcons in Chicago” search directed him to the Chicago Peregrine Program at the Field Museum, which has tracked Illinois’s population since 1985. Arashiba sent program director Mary Hennen an email with a photo of Linda and Steve attached.

“It’s the Belmont-Addison pair,” Hennen immediately replied, identifying the birds by the names of the parallel streets that run through their territory. She said the couple had united three years ago (peregrines mate for life), and had already attempted to nest twice that year (in 2013 the pair had successfully fledged four falcons in a different flower box in the area). The falcons are protected under the Migratory Bird Treaty Act, so it is illegal to kill or even disturb them, Hennen told Arashiba. Armed with this information, he went on the offensive. “The birds have returned, but we can’t do anything about it,” he explained to the building’s management. And with that, Linda and Steve became the tower’s newest tenants.

Hennen told Arashiba it was unlikely the couple’s third clutch of the year would survive, and she was right. In early July Arashiba looked out to find an empty nest. (When peregrine eggs fail the parents either push them out of the nest or eat them.) Linda “sat on the railing that night, not in the nest as usual,” Arashiba recalls. “I poured a whiskey, and we had a little wake.”

The birds weren’t likely to return to the same nesting spot, Hennen told him. But this past spring, almost exactly a year after the first encounter, they were back. “Linda showed up and sat on the railing,” Arashiba says. “I was really excited.” Then came Steve. By mid-April there were four eggs. Arashiba had a hunch that this time the eggs would hatch, so he set up a webcam and started posting his photos to Instagram. 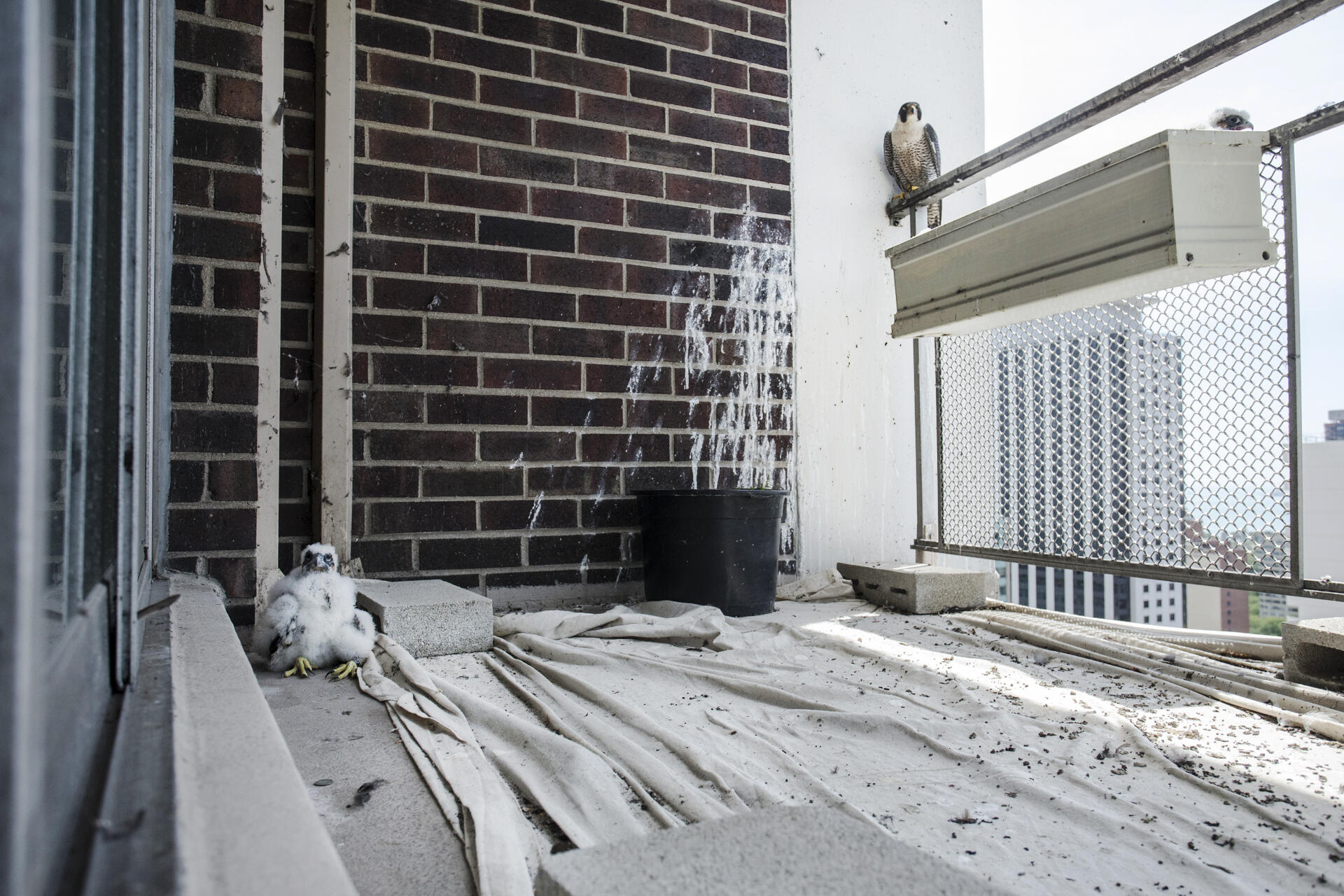 The account caught the eye of wildlife photographer Luke Massey as he lounged one night in his camper van near Venray, the Netherlands, scrolling through Instagram after a full day filming beavers. “I was pretty amazed by the photos,” says Massey, whose camera work of illegal bird hunting in Malta won a 2014 Green Ribbon Award for Best Environmental Campaign by U.K. media. A few hours later Massey direct-messaged Arashiba, asking about the peregrines. Arashiba responded, recounting Linda and Steve’s multi-season nesting saga.

Eventually Massey asked if he could come photograph the birds; Arashiba agreed and even offered Massey and his assistant (also girlfriend), Katie Stacey, his spare room. Three weeks later they arrived in Chicago, where Arashiba, at work at the time, had left spare keys with his front desk. “I’m a trusting sort of guy,” he laughs, recalling his couch-surfing days as a rock musician.

While Arashiba went about his normal routine, Massey and Stacey began shooting the birds and their just-hatched offspring. During three different visits, they spent 14-hour days capturing the early lives of the chicks, named Katy, Luke, Joe, and Refrigerator after other famous Perrys.

The chicks were naturals, and the parents were very forgiving. “Luke [Massey] lucked out with a very calm pair,” Hennen says. None of the photos showed signs of agitated birds—wings outstretched or beaks wide open. Still, Massey kept his distance—at least six feet from the new family. To capture Linda in her favorite corner roost, Massey had to hang out of a window, while Stacey held the flash eight feet behind him, ready to swap lenses. (There was a lot of precarious leaning involved in the 8,000-plus shots Massey took.) 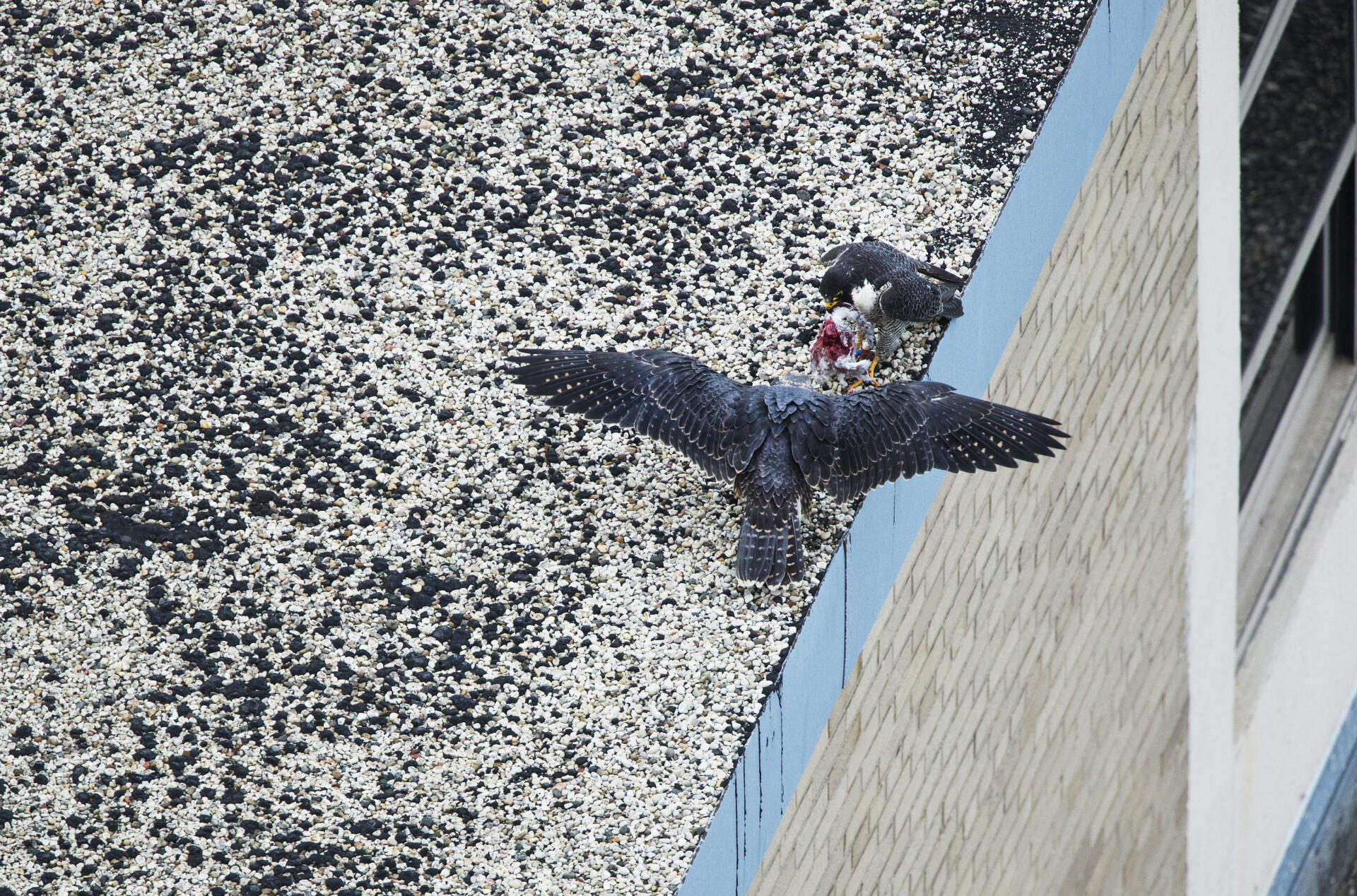 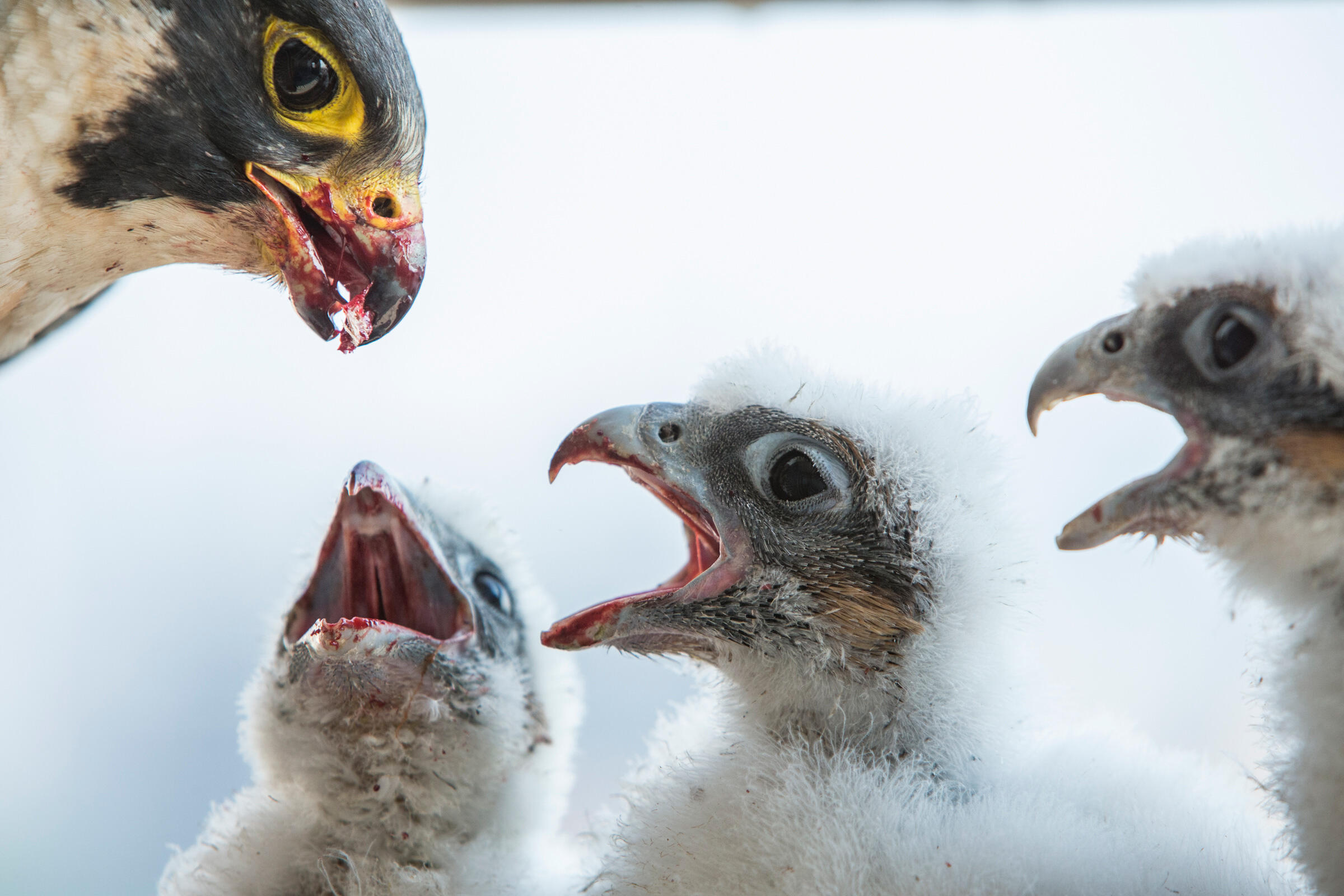 Despite living in such close quarters, Massey, Arashiba, and Stacey managed to avoid getting on one another’s nerves. Talking peregrines by day and consuming wine and dinner together after dark, they bonded quickly. The photographers saw Arashiba’s comedy troupe, Awful People, perform its newest sketch, “Odd Bird,” a David Attenborough–inspired nature documentary spoof on the peregrines (“It’s May, and the wandering falcons have returned to the city . . . instead of a cliff scrape, a 30-story building with a pool . . .”).

By late June the chicks had lost their downy feathers and were preparing to fledge. Their early attempts at flight put the three humans on edge, but luckily the birds were smart enough to tip in onto the balcony, instead of out onto the pavement—300 feet below. Before they flew off for good, Hennen and a colleague from the Chicago Peregrine Program stopped by to attach identification bands to the chicks’ legs, standard practice with urban peregrines. When the last chick flew on the first of July, Steve and Linda left as well. “Once [the chicks] were off the balcony, my primary emotion was relief,” Arashiba says. “I also felt that second-hand pride of an uncle when the kids turn out well.”

Hennen and her team will be able to identify the Belmont-Addison fledglings in the months and years to come thanks to their ID bands—essential for a bird that was removed from the state’s endangered and threatened species lists only in May. Thanks to the Peregrine Program’s successful captive-release effort, 21 breeding pairs now thrive in a state that hosted just one back in 1988. Similar programs, and the 1972 banning of DDT, allowed Peregrine Falcons to be removed from the federal endangered species list in 1999—the same year they became Chicago’s official bird. The raptors have rebounded quickly, in part because of their willingness to adapt to urban environments, swapping their preferred cliff nests for skyscraper ledges and, of course, high-rise balconies. 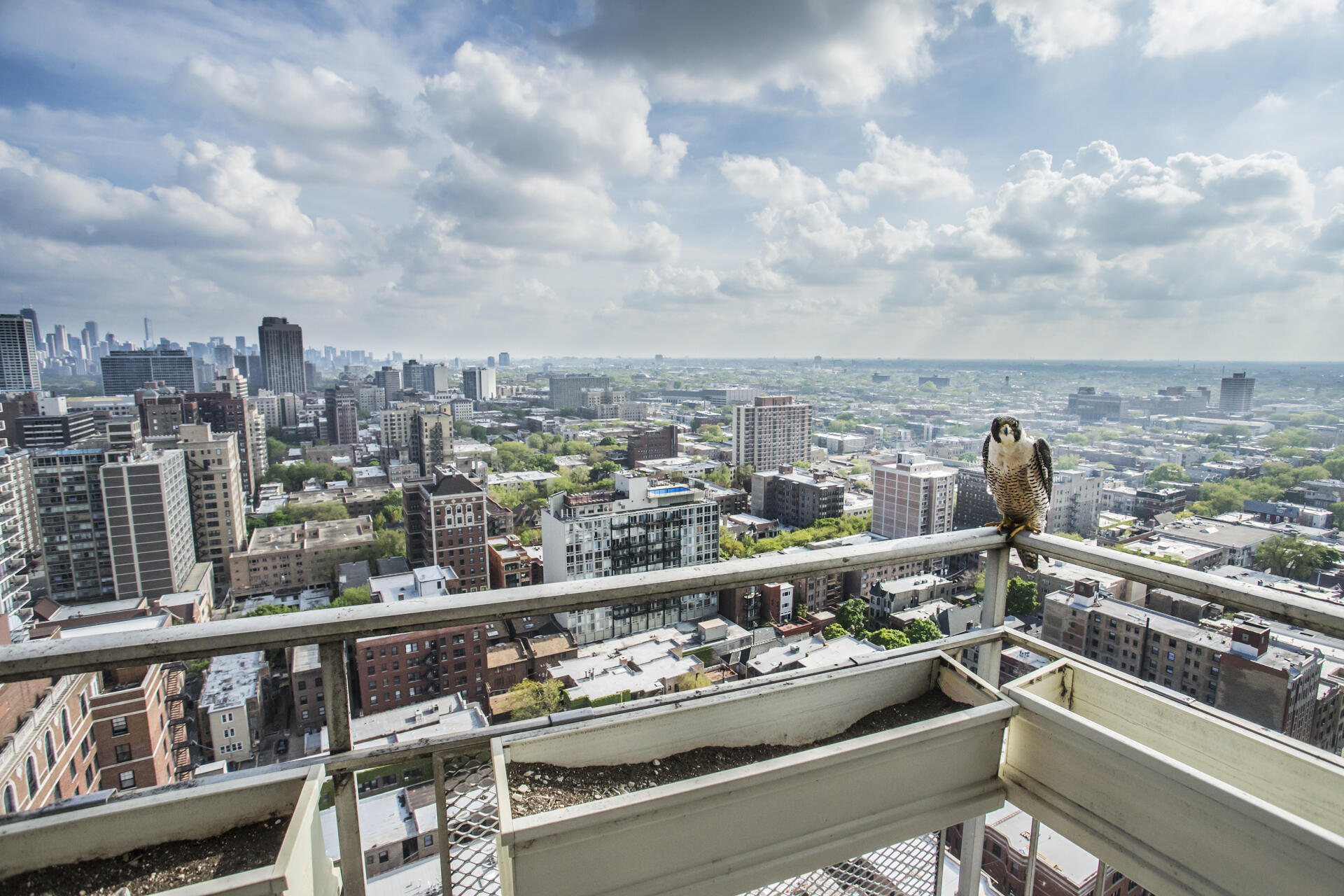 Massey, who is publishing a children’s book and a 2016 calendar of his photos, hopes Steve and Linda will return next spring. If they do, he may, too—even after thousands of photos, there was one shot he didn’t perfect: the food pass between parents. Regardless, the trio will reconnect soon; Arashiba will join Massey and Stacey for a vacation in Spain, where the couple is  currently photographing the Iberian lynx.

Back at the condo, the residents are now fully on board with sharing space with the birds. Massey recalls one neighbor across the way who liked to crack a beer and just sit back and watch them. “It’s almost the norm for locals now,” he says, “just grilling on your balcony barbecue, right there next to one of the fastest animals in the world.” 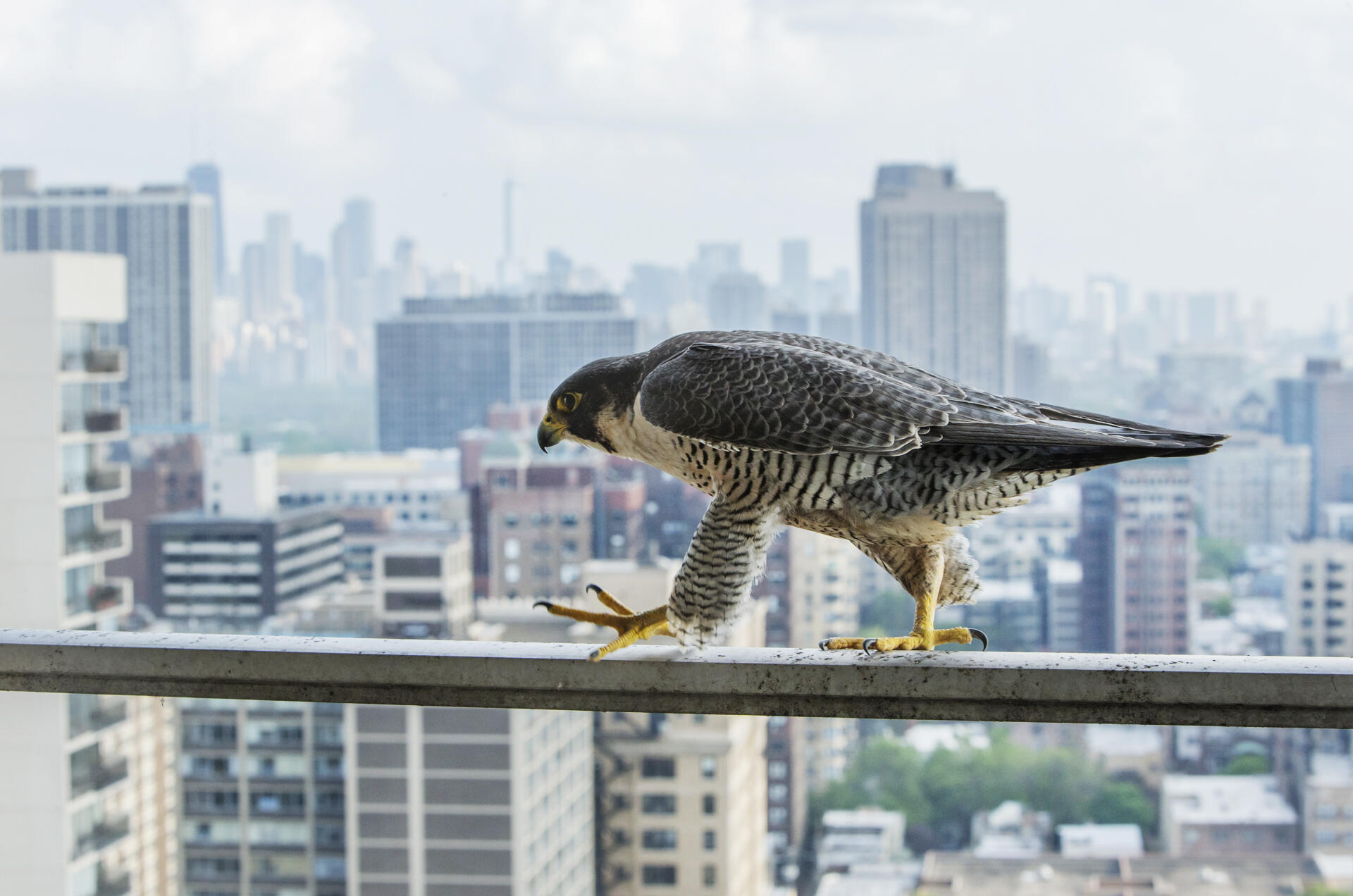 While the chicks were young, Massey and Arashiba kept their distance from the protective parents. Photo: Luke Massey 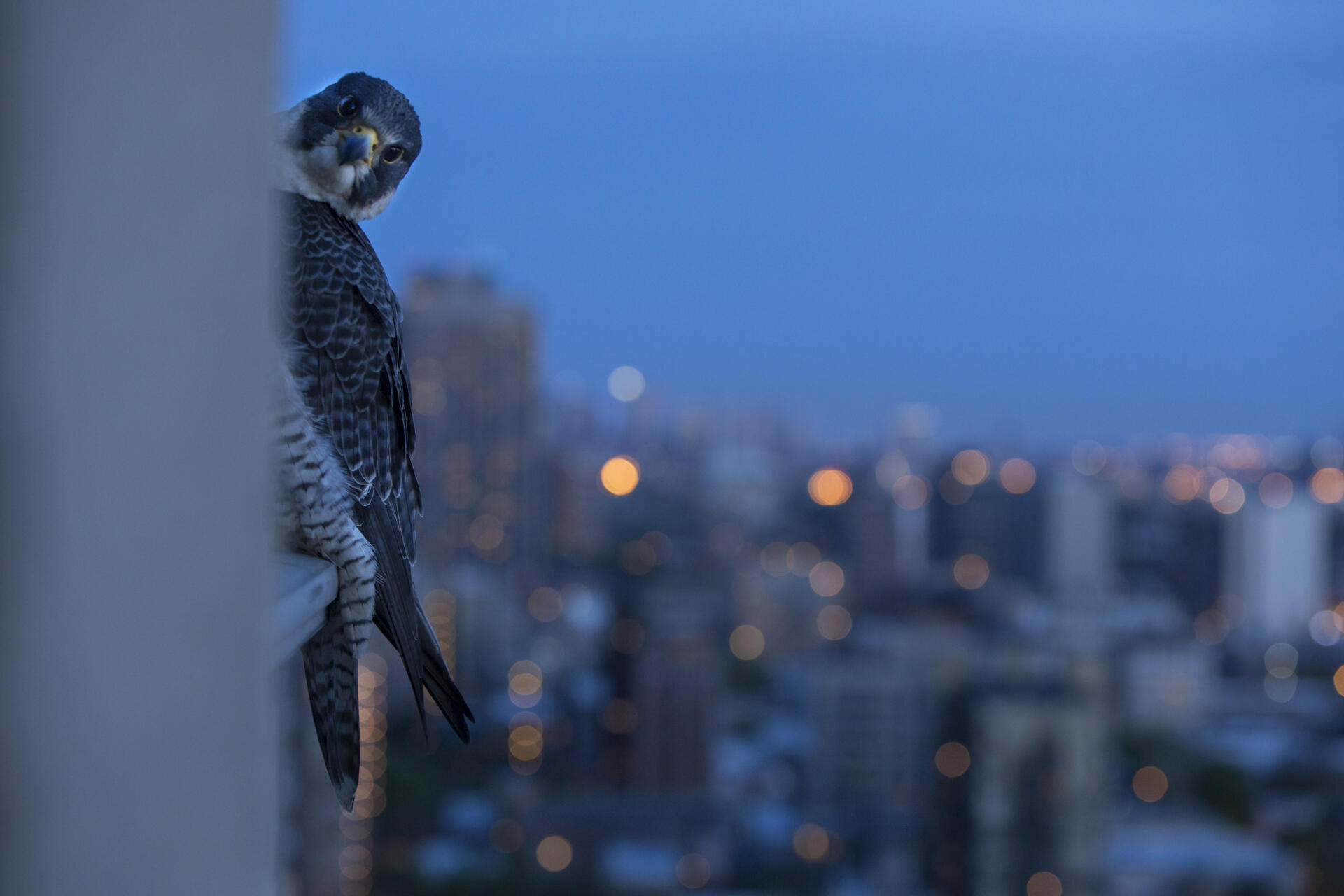