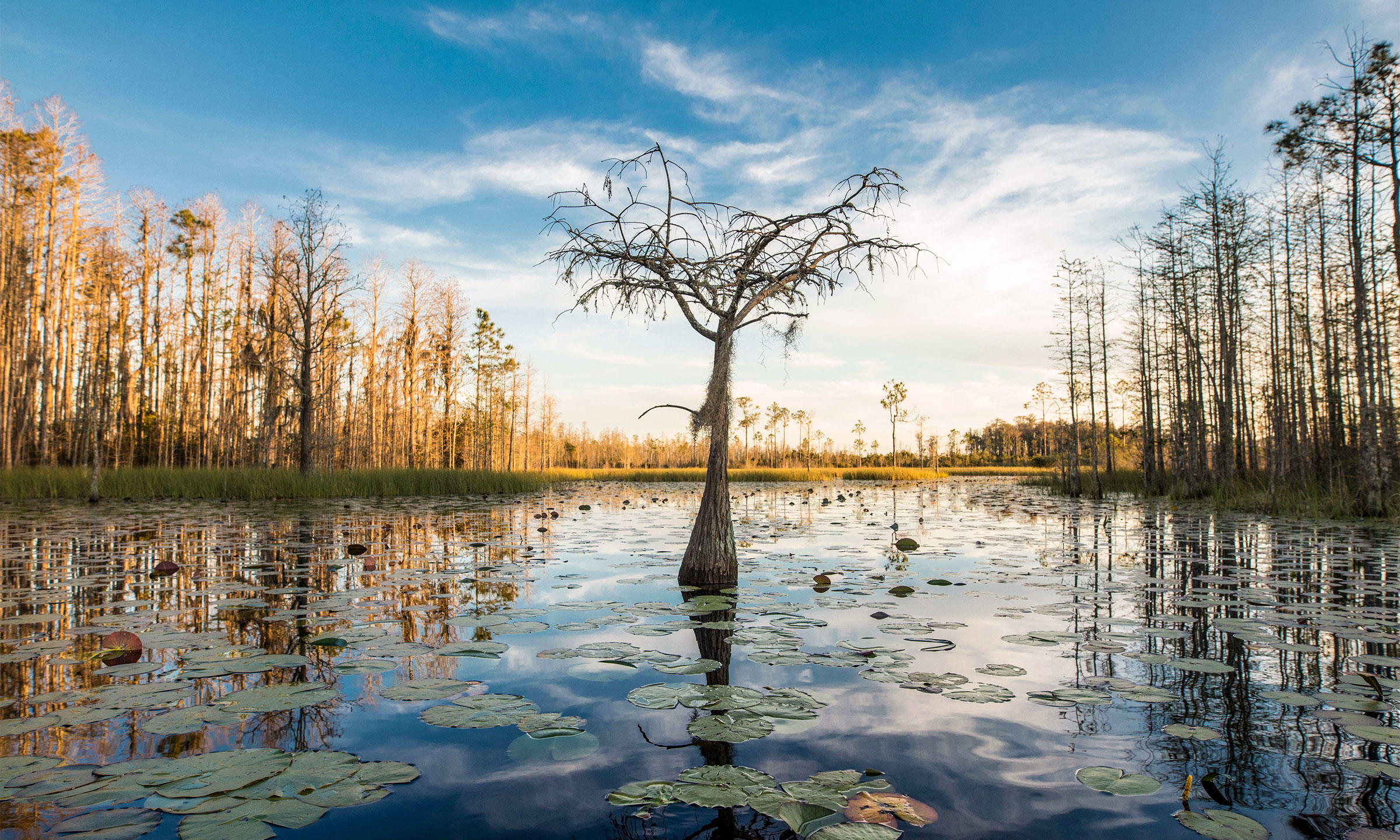 Proposed Georgia Mine Next to Okefenokee Swamp Raises Alarms

Opponents say excavating a ridge along the swamp’s edge threatens the water that is the lifeblood of the largest national wildlife refuge in the East.

Head about 40 miles into southern Georgia from the Atlantic shore and you’ll find yourself facing another, older beachfront. This is Trail Ridge, a mile-wide, 100-mile-long sandy spine parallel to the coast, the remnant of a Pleistocene barrier island system. Climb up and over the roughly 150-foot-high rise and you’ll soon wade into the tea-colored waters of a vast wetland wilderness, the Okefenokee Swamp.

The 700-square-mile bog, some 90 percent of it within the Okefenokee National Wildlife Refuge, is the largest intact swamp of its sort in the country. Its ponds, prairies, marshes, and woods host alligators, black bears, and more than 200 bird species, including the federally endangered Red-cockaded Woodpecker and the threatened Wood Stork. Trail Ridge acts as a dam along the Okefenokee’s eastern edge. It holds the swamp in place, and the way water moves through its layers of soil influences the swamp's depth and flow.

Mixed in with its ancient beach sand, the ridge also holds significant deposits of minerals whose domestic production the Trump administration has sought to increase for national security and economic strength. Companies have mined parts of Trail Ridge in Florida for years. But now, an Alabama company wants to pull titanium and zirconium out of the ridge in Georgia, starting with a tract less than three miles from the refuge in what would be by far the closest mine to the Okefenokee.

The mining company, Twin Pines Minerals, LLC, says the project will create up to 400 well-paid jobs and more than double the tax base in Charlton County while curbing the nation’s reliance on imports of critical minerals. (Zirconium is used mostly in the nuclear power industry; about 90 percent of the country's titanium mineral supply is used as titanium dioxide, a white pigment for toothpaste and paint, with the rest processed into metals useful for aircraft and medical equipment.) It describes its proposal as a demonstration project—a chance to prove, on a 900-acre parcel, that it can safely mine near the Okefenokee without harming the swamp and its wildlife.

Conservationists, however, remain skeptical, describing the project as an attempt by Twin Pines to get its foot in the door to eventually mine thousands of acres along Trail Ridge even closer to the swamp. And they worry that mining around the lip of the Okefenokee might not only spoil its wilderness value, but could also partially drain it, disrupting the natural ebb and flow of water that is the heartbeat of its ecosystem.

Twin Pines President Steve Ingle says he’s confident, based on the study he commissioned from engineering firm TTL, Inc., that the project won’t significantly affect water levels in the Okefenokee. “They have done their due diligence, investing thousands of hours in research, testing and modeling to confirm that our mining operations will be protective of the swamp, waterways, plant and animal species and the surrounding environment,” he said in an email to Audubon magazine.

But University of Georgia hydrologist Todd Rasmussen says the company hasn’t provided enough evidence to instill that confidence in others. “Their model is not sufficiently robust to be able to make that statement,” he says. “They don’t show that it doesn’t affect the Okefenokee. They don’t really show anything.”

Ingle says part of the purpose of the mine is to demonstrate the validity of the company’s water model, but advocates for the Okefenokee say that’s too big a gamble. “By the time we know if a mine like this would be damaging to the swamp, it’ll be too late to do anything about it,” says Jon Andrew, who oversaw the Okefenokee for eight years as Southeast regional refuge chief for the U.S. Fish and Wildlife Service. “How do you put Humpty Dumpty back together?”

The Okefenokee, the largest national wildlife refuge east of the Mississippi River, has been deemed a Wetland of International Importance through the intergovernmental Ramsar Convention. It contains both a 354,000-acre federal wilderness area and, within a state park that it enfolds, a designated Dark Sky Park, where the Milky Way arcs brilliantly overhead. It draws around 600,000 visitors a year. “This refuge was formed back in 1937 and the major form of wildlife that it was established for was birds,” says Bill Sapp, a senior attorney with the Southern Environmental Law Center. “It’s always been a really special place for birders to go. It’s just a magical place.”

The swamp also holds deep cultural significance for the Muscogee (Creek) Nation, who were forcibly removed from the area to what is now Oklahoma in the 19th century, says Turner Hunt, an archeological technician with the tribe’s Historic and Cultural Preservation Department. “It has a place in our lore, it has a place in our history,” he says. “Any kind of risk to that is something that we have to take very seriously.” So far, however, Hunt’s office hasn’t received enough information about the project to provide informed government-to-government consultation, he says.

The proposal is a kind of do-over for Twin Pines. Last July, the company applied to the U.S. Army Corps of Engineers for a permit required under the Clean Water Act for the first phase of a mining project to eventually cover 12,000 acres. According to emails obtained by Sapp’s group, the Army Corps told Ingle last December that, given the scale of the project, the agency would require an environmental impact statement (EIS) before letting the project proceed, rather than a less rigorous environmental assessment. Ingle “was adamant that doing the EIS right now was unacceptable for his business, but did not necessarily dispute the fact that one was likely necessary at some point,” and raised the idea of a smaller demonstration project to allow work to begin, the emails show. Twin Pines withdrew that larger application in February, and submitted its permit application for the pared-down project the following month.

The proposal is a kind of do-over for Twin Pines.

Ingle says Twin Pines will take whatever steps the Army Corps requires. But some opponents of mining near the Okefenokee see the company’s latest proposal as an effort to avoid the in-depth public-input process that comes with an EIS, skate by on an environmental assessment, and still ultimately develop the full 12,000 acres. “Though the details of this permit application have changed slightly, Twin Pines’ larger intent has not,” says Christian Hunt, southeast program representative for Defenders of Wildlife. His group and others are urging the Army Corps to require a full EIS for the project. “Our wildlife concerns remain essentially unchanged.”

Among those concerns, he says, is that mining operations might destroy or fragment habitat for the threatened eastern indigo snake and the endangered Red-cockaded Woodpecker, which inhabits islands and uplands in the Okefenokee. Sediment or pollution stirred up by mining could impair spawning habitat for endangered Atlantic and shortnose sturgeon in the St. Mary’s River, whose source is the swamp. And the threatened Wood Storks that forage in the swamp might no longer be able to do so if the project disturbs the rhythms of gradually rising and falling water levels they rely on to concentrate prey in the shallows.

One way the mine could upset those rhythms, conservationists worry, is by changing the complex geology of Trail Ridge. Twin Pines plans to excavate the ridge in strips 500 feet long and 100 feet wide, digging up to 50 feet deep. After extracting the minerals that make up roughly 2 percent of the sand, crews will replace the remaining 98 percent, filling the pit as they go. Opponents of the project say replacing Trail Ridge’s natural soil layers with homogenized fill is bound to change the swamp’s hydrology.

“It’s just like if you were making a cake, and took an egg beater, and just went around in the cake and ground it up,” says Charles McMillan, natural resource director for the Georgia Conservancy and a trained civil engineer. “So instead of a layered cake with the soil layers laid down, you have something that looks like it was put in a blender. What are the hydrologic properties of that?”

Government agencies have voiced similar concerns. Following Twin Pines’ earlier application, the U.S. Environmental Protection Agency last year described the potential impacts as “uncertain,” and warned the Army Corps that the project would have “a substantial and unacceptable impact on aquatic resources of national importance.” The Fish and Wildlife Service also weighed in on the earlier application, expressing “concerns that the proposed project poses substantial risks for significant affect to the environment” and urging the Corps to require a full EIS.

The Corps will consider a new round of input from both agencies when a public comment period for the new permit application closes on May 28. Advocates for the Okefenokee expect to see a surge of comments opposing the project. In the 1990s, chemical giant DuPont planned to mine titanium on the swamp’s edge, not far from the proposed Twin Pines project. The plan met such overwhelming public opposition that DuPont not only withdrew it, but donated 16,000 acres of its project site to the nonprofit Conservation Fund.

“But here we are again, unfortunately,” says Andrew, the former refuge official. “We’re going to have to fight this.”