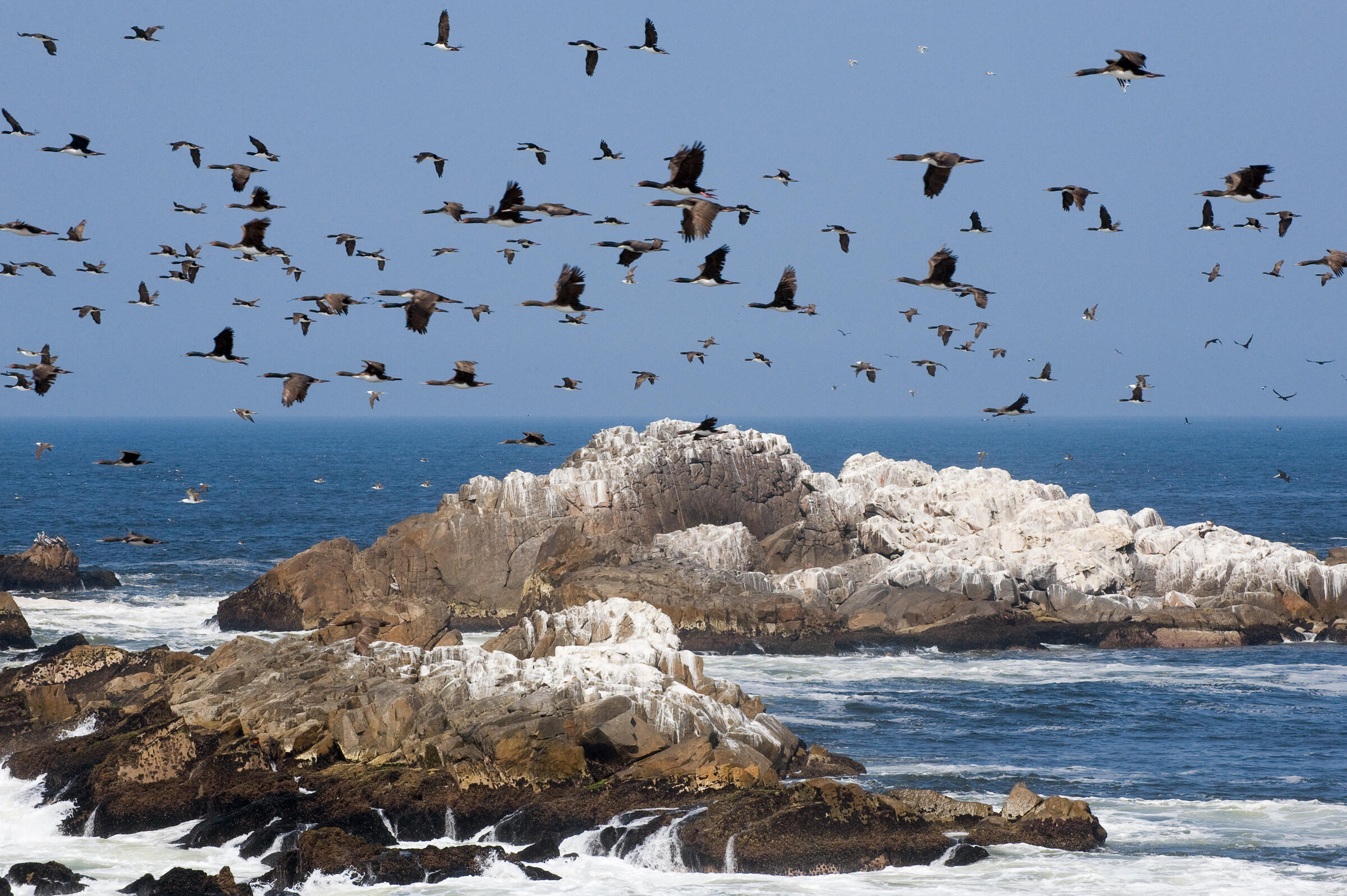 A flock of Guanay Cormorants seen off the coast of Peru. Photo: Kevin Schafer/Minden Pictures

The Incas Were Some of the Earliest Bird Conservationists

Seabirds and their guano were essential to the spread of the Inca Empire, and a new study details the measures it took to preserve them. 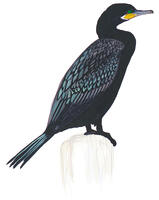 When Pedro Rodrigues began studying cormorants at the Austral University of Chile, he had no intention of writing about the Inca Empire. A biologist who specializes in the evolution and geographic distribution of birds, Rodrigues was initially researching genetic diversity in Neotropic Cormorants, a waterbird that spends most of its time in South and Central America.

One day he decided to look at maps showing the geographic distribution of other cormorants for comparison, and noticed something odd about the range of the Guanay Cormorant. “I noticed that its distribution was almost the same as that of the Inca Empire,” Rodrigues says. “I looked at that and I said, Huh, interesting.”

The Guanay Cormorant wasn’t the only bird that appeared to be a holdover resident of the Inca Empire. The distribution maps of the Peruvian Pelican and Peruvian Booby, Rodrigues noticed, also looked eerily similar to the boundaries of the Inca’s 15th-century South American empire, whose borders eventually stretched from the northern tip of modern-day Ecuador to central Chile.

Rodrigues pored over papers and historical accounts, spoke with archaeologists, and visited museums. Other scholars had remarked that the Peruvian Pelican showed relatively low genetic differentiation across its range, which suggested that it had expanded its range relatively recently. Rodrigues decided to take his research one step further: “Nobody ever seemed to ask why the distribution was the way it was,” Rodrigues says, so he decided to find out himself.

As Rodrigues and his co-author and wife, Joana Micael, write in a recently published paper, the correlation between the birds’ range and the Inca Empire’s boundaries was no coincidence: The Incas had a symbiotic relationship with the Guanay Cormorant, Peruvian Pelican, and Peruvian Booby. The birds were so important to the Inca Empire, in fact, that it created what may have been the first-ever conservation laws in human history, which would have helped the birds expand their range. And the reason why the birds were so cherished by the Incas, as with so many things in life, comes down to poop.

“These seabirds eat a lot of fish, and fish contain a lot of nitrogen,” Rodrigues explains. That nitrogen is absorbed into the birds’ bodies and eventually expelled as guano—the term for large piles of bird poop that is derived from huanu in Quechua, the indigenous language of the area. That means guano can make for an incredibly effective fertilizer. “The Incas were not the first people to use guano,” Rodrigues says. “They probably learned that from the people that lived in the area before the Inca Empire.”

The Incas, however, were fond of extensive rule-making, and they continued that tradition by becoming the first known people to come up with an in-depth system of guano management. They put strict rules in place around hunting the birds, and how and when people could access the islands where they nested to collect guano. There were severe punishments for anyone who broke the law: “The penalty for anyone who killed any bird, at any time or in any place, or disturbed them on the nest,” Rodrigues writes, “was death.” It was, in a way, the Inca version of the Migratory Bird Treaty Act, which safeguards birds across North America today—albeit with dramatically harsher penalties.

At the height of the Inca Empire in the 15th century, Rodrigues estimates, the populations of all three seabirds—collectively called the guano birds by ornithologists—were so large that they produced guano piles that were tens of meters thick. Under the Inca system, citizens were forbidden from landing on the islands the birds called home during their breeding season, and guano supplies were rationed according to province. Outside of the breeding season, the Incas would transport guano by llama caravan into the Andes as far as Machu Picchu, more than 600 miles away from the birds’ coastal homes.

Thanks to a combination of guano management and innovative irrigation methods, the Inca Empire could establish and sustain farms in places that were too arid for agriculture, such as the Atacama desert and coastal Peru and Chile (which see little rainfall, even though they’re on the coast), allowing it to expand its borders farther and farther. Guano fertilization also allowed the empire to build up food stores that could last from three to seven years, providing the Inca with substantial food security—a fact that Rodrigues says was reflected in Inca religion. The Inca goddess Urpi Huachac, who represented sea life and shore birds, was also known as "The Lady of Guano."

“For the Inca,” Rodrigues says, “guano was like gold."

When Spanish colonizers encountered the Inca Empire, they didn’t initially understand guano’s value. “It wasn’t exactly a gift to bring back to the king,” Rodrigues says. “At the end of the day, it was still bird shit.” 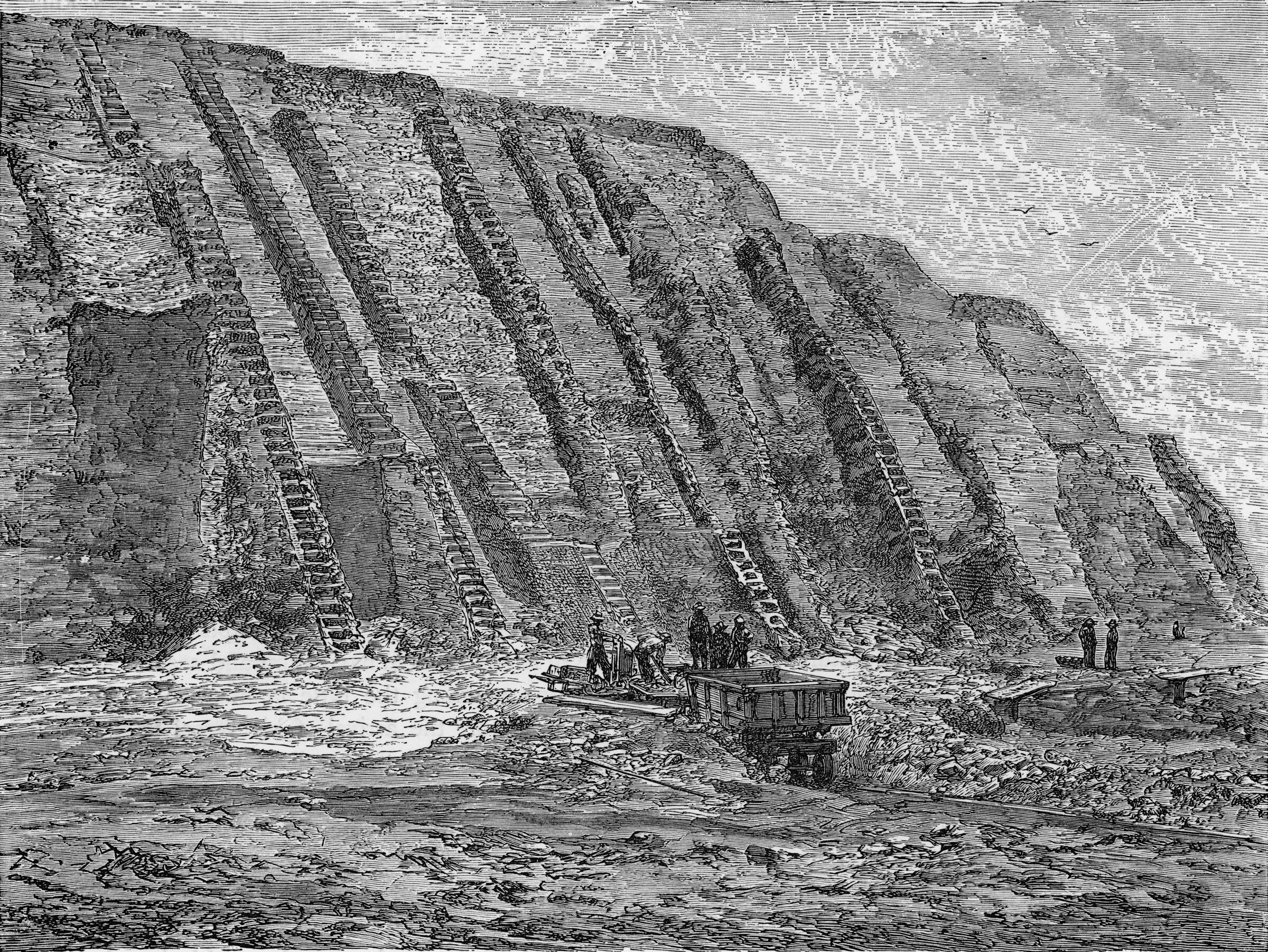 Guano mining operations depicted in the Chincha Islands, Peru around 1870. The deposits of seabirds were sought after as prized fertilizer in the nineteenth century. Engraving: Chronicle/Alamy

It didn’t take long, however, for the United States and Europe to recognize how useful guano could be: In the early 19th century, European farmers and chemists declared guano from Peru’s Chincha Islands to be the finest fertilizer in the world, and demand for South American guano skyrocketed.

In 1864, a few decades after Peru, Chile, Ecuador, and Bolivia gained their independence in the early nineteenth century, they went to war with Spain over the Chincha Islands—the winner, both sides knew, would be able to control access to what had quickly become one of the most valuable commodities in the world. In 1856, the United States, concerned about the price of Peruvian guano—which had reached 76 dollars per pound by 1850—passed the baldly imperial Guano Islands Act of 1856, which allowed (and still allows) any American who discovered an island with a large supply of guano to claim that island as an American territory.

Unlike the Incas, neither the 19th-century Peruvian government nor the Spanish colonists before them established a system of guano management. By 1870, the various guano-rich islands off the Peruvian coast had been practically leveled, robbed of all guano, and the birds’ habitats were ruined. Suddenly, farmers in Europe and the Americas were faced with a problem of supply rather than cost, and the Peruvian government had to contend with the loss of a major source of income.

With the development of the Haber-Bosch and Otswald processes in the early 20th century, which allowed for the production of ammonia and nitric acid, nutrient-rich synthetic fertilizers became easier to produce and the world turned away from guano. But, Rodrigues says, guano is becoming popular again in the 21st century, thanks to high prices for synthetic fertilizers and increased demand for organic, natural foods from consumers in Europe and the Americas. Unlike synthetic fertilizers, guano can help build soils, making it a potentially crucial tool in fighting soil erosion.

Rodrigues hopes that as the Peruvian government and farmers in Europe and the United States look toward guano again, they can draw more lessons from how the Inca Empire approached natural-resource management. “I think we can learn something from how they combined the knowledge of various indigenous peoples to create conservation policy,” he says.

Just as the Incas built on the knowledge of the people who came before them, the Peruvian government is learning from its previous mistakes and instituting laws to protect the bird and control access to their islands during the breeding season, even as guano production picks up.

There is, however, one essential difference, Rodrigues notes: “Nobody is getting killed for disturbing the birds now.”