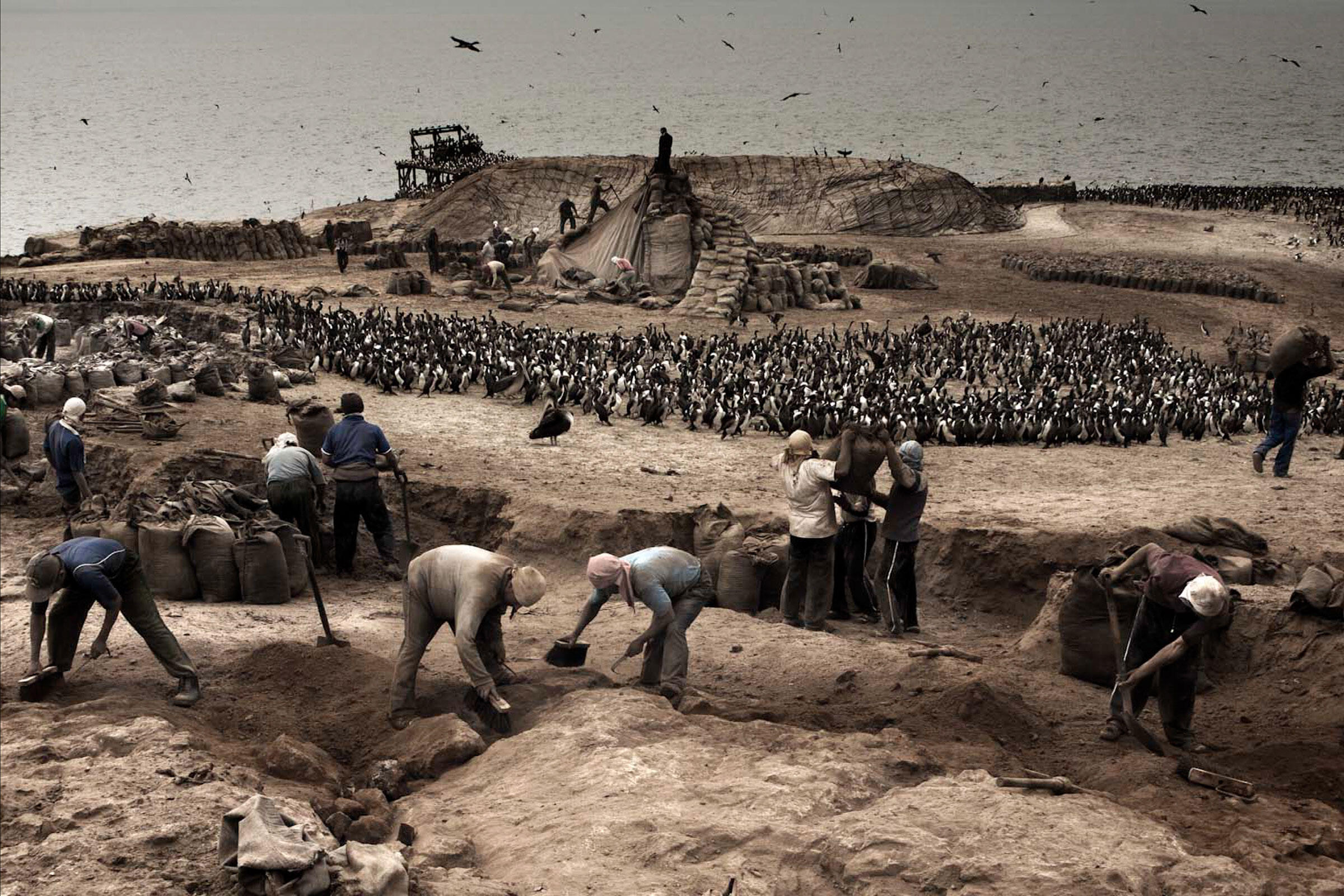 Guanay Cormorants (named for their prodigious guano production) and Peruvian Pelicans stand by as laborers scrape guano from the ground and shovel it into large sacks on Macabi, an island off Peru's coast. Photo: Ernesto Benavides

Holy Crap! A Trip to the World's Largest Guano-Producing Islands

The century-old industry nearly dried up from overharvesting. Now Peru aims to protect the birds, their habitat, and the rich resource they create.

By Nell Durfee/Photography by Ernesto Benavides

By Nell Durfee/Photography by Ernesto Benavides

As Ernesto Benavides’s boat neared a small island off the coast of Peru, it quickly became clear that he was entering an avian domain. Hundreds of birds swirled over the dusty brown pancake of land, and the cacophony of their calls cut through the roar of the motor. Then came the odor. “Everything smells of guano,” recalls the Peruvian photographer. “It’s very bitter.”

The dung—and the industry that extracts it—is what drew Benavides to visit multiple islands, including Macabi and the Chinchas, which are part of 22 small islands off Peru's coast. Peru is the world’s largest producer of guano; more than 21,000 tons are harvested from the Chinchas alone each year, says Benavides. Some 4 million birds call Peru's islands home, and most of the guano comes from Guanay Cormorants, Peruvian Pelicans, and Peruvian Boobies, according to the IUCN. While pelicans and boobies have stable populations, the IUCN lists the cormorant as near-threatened.

The islands were first discovered by the Incas, who recognized guano’s benefits for agriculture. Throughout the 1800s the brown gold was in global demand for fertilizer and explosives; later that century, the resource became so valuable that two wars broke out over possession of the islands, with Spain, Bolivia, and Chile vying for them.

When Peruvians first started harvesting guano more than a century ago, the hard-packed dung was up to 200 feet deep. Extraction quickly ate away at the deposits; from 1840 to 1870 an estimate 12 million tons were removed. These days, it’s a few feet deep in most places. “Peru is very rich in natural resources, but we have been very poor in how we manage them,” Benavides says.

Demand picked up again several years ago, due to a combination of the rising cost of synthetic fertilizers and farmers' growing interest in organic options. Today there are safeguards in place to help prevent wiping out the resource or upsetting the birds. The government tightly controls guano extraction, and the Chinches are federally protected as they’re part of the Guano Islands, Isles, and Capes National Reserve System. In order to avoid stressing the birds, workers don’t use loud machinery or stay on any one island too long, says Benavides. The harvest rotation not only reduces disturbance to the birds, it also allows time for guano stores to replenish.

While guano harvesting continues at a more sustainable pace, nobody expects the dung to build up to the depths of a century ago—in large part because the islands boast a fraction of the birds that historically called them home. The decline is due to numerous factors, including overfishing of anchovies—the birds’ main food source—and the fact that the docile creatures make easy targets for poachers. “There’s less guano now because there are not as many birds as there used to be,” Benavides says. That’s why, he says, protecting the islands is so important—not just to ensure the industry continues, but also to help the birds that live there thrive. 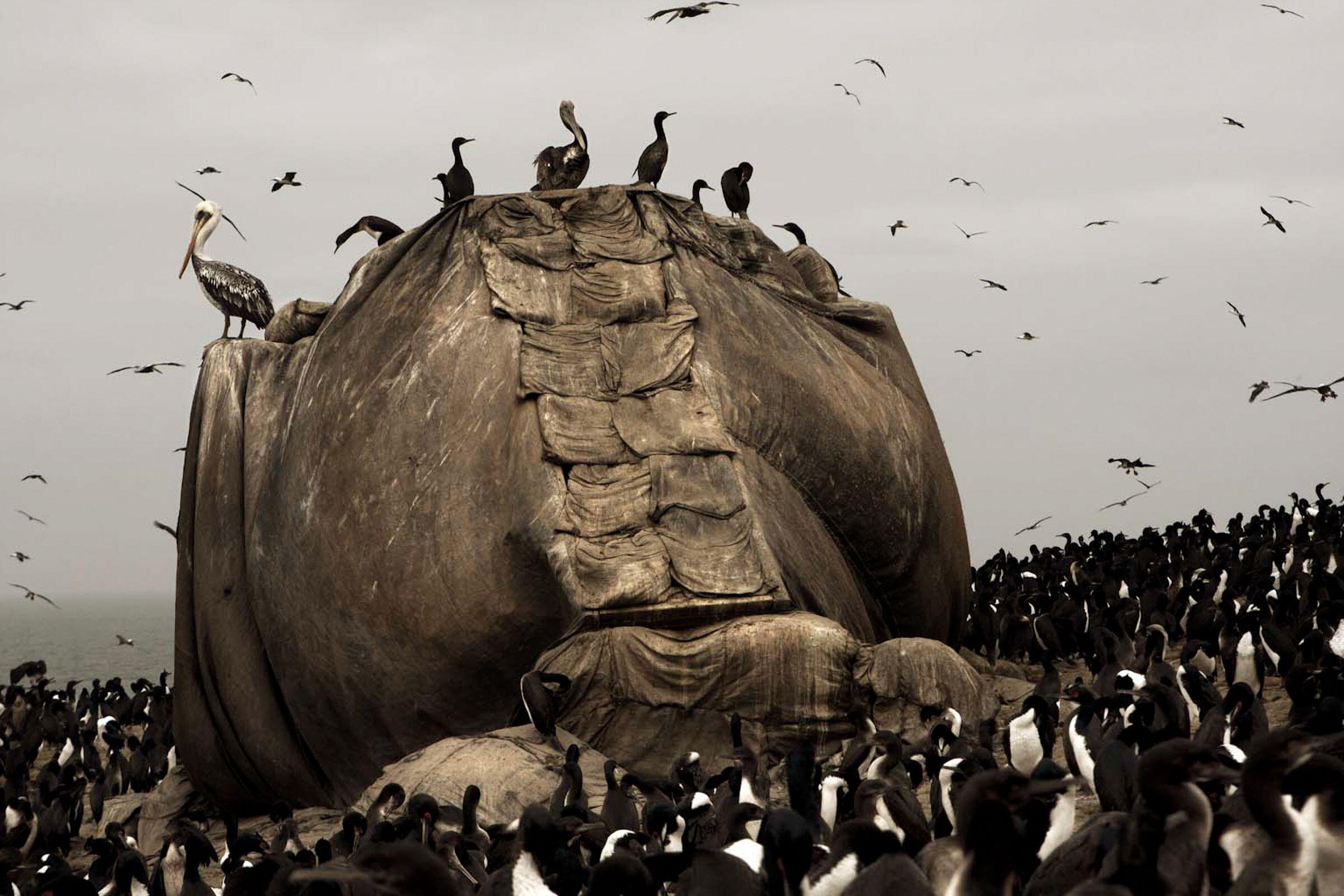 Once sacks are filled, the contents are dumped into a large sieve—called the “El Elefante,” or elephant, for its size and shape—that separates bones, rocks, and other debris from the pure guano. The primo product is then transferred to bags, which are piled into a series of small dinghies, strung together with rope. This “train of boats,” as Benavides calls it, transports the goods to the mainland. 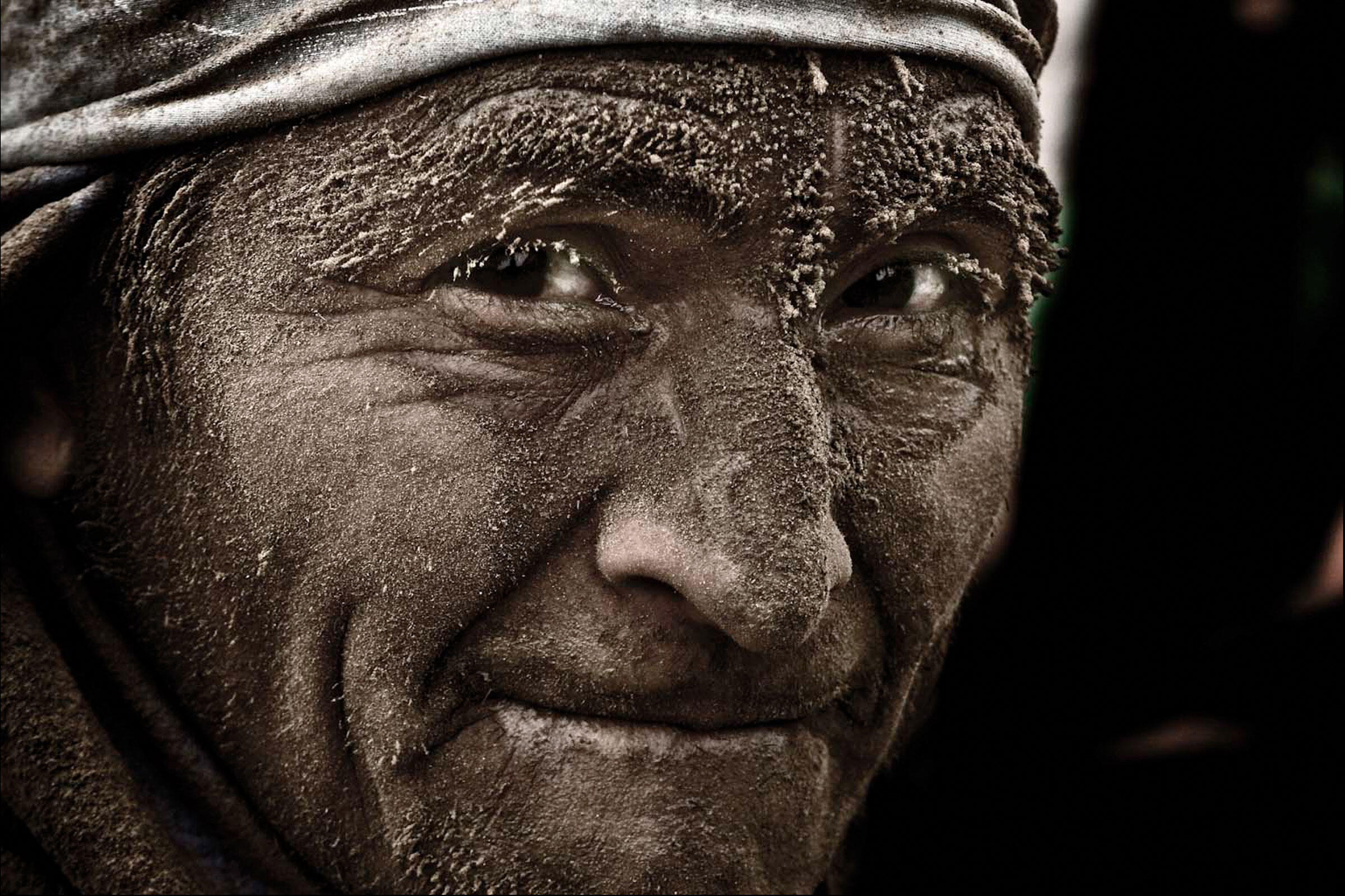 By the time his shift ends in the early afternoon, Lucio Elio Portal Chiquian, 57, is covered with guano. Some workers wear handkerchiefs over their mouth and nose to avoid breathing in the dust kicked up by the harvest, Benavides says. The dust and odor of ammonia that guano gives off are just part of the harsh work environment. “The whole place is full of pits, full of fleas, and thousands of birds flying around shitting on your head,” says Benavides. “It's really hard conditions.” 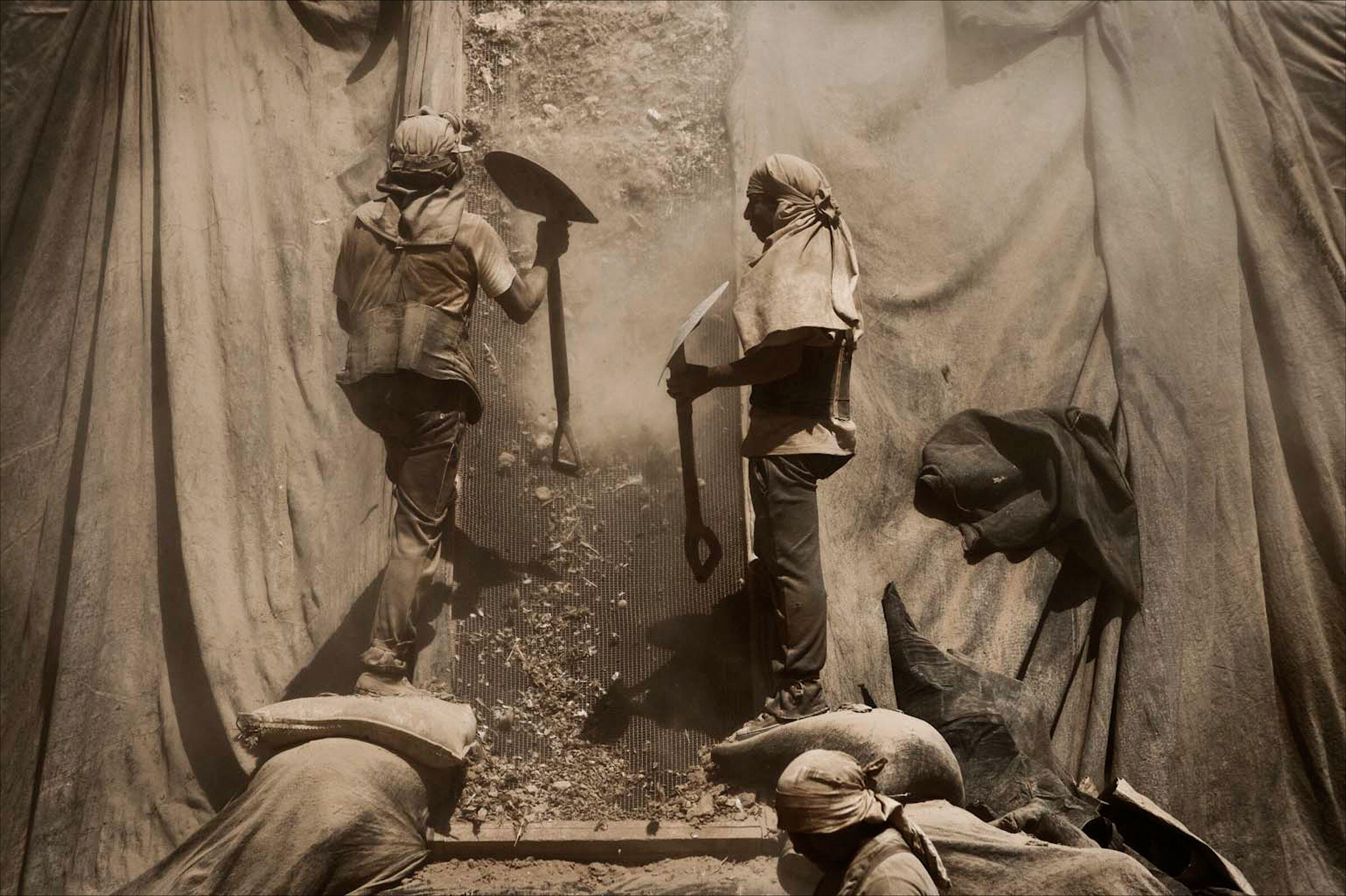 Workers attend to the sieve. A half century ago, guano harvesting was done by prisoners and Chinese indentured servants, many of whom perished on the island. Today most are Quechua-speaking laborers who come from the highlands of Peru, drawn by the ability to earn several hundred dollars a month—multiple times what laborers make at home. The islands offer no showers, and only a few have formal shelters. Despite the hardships, Benavides says, members of the tight-knit community are proud of the work they do. 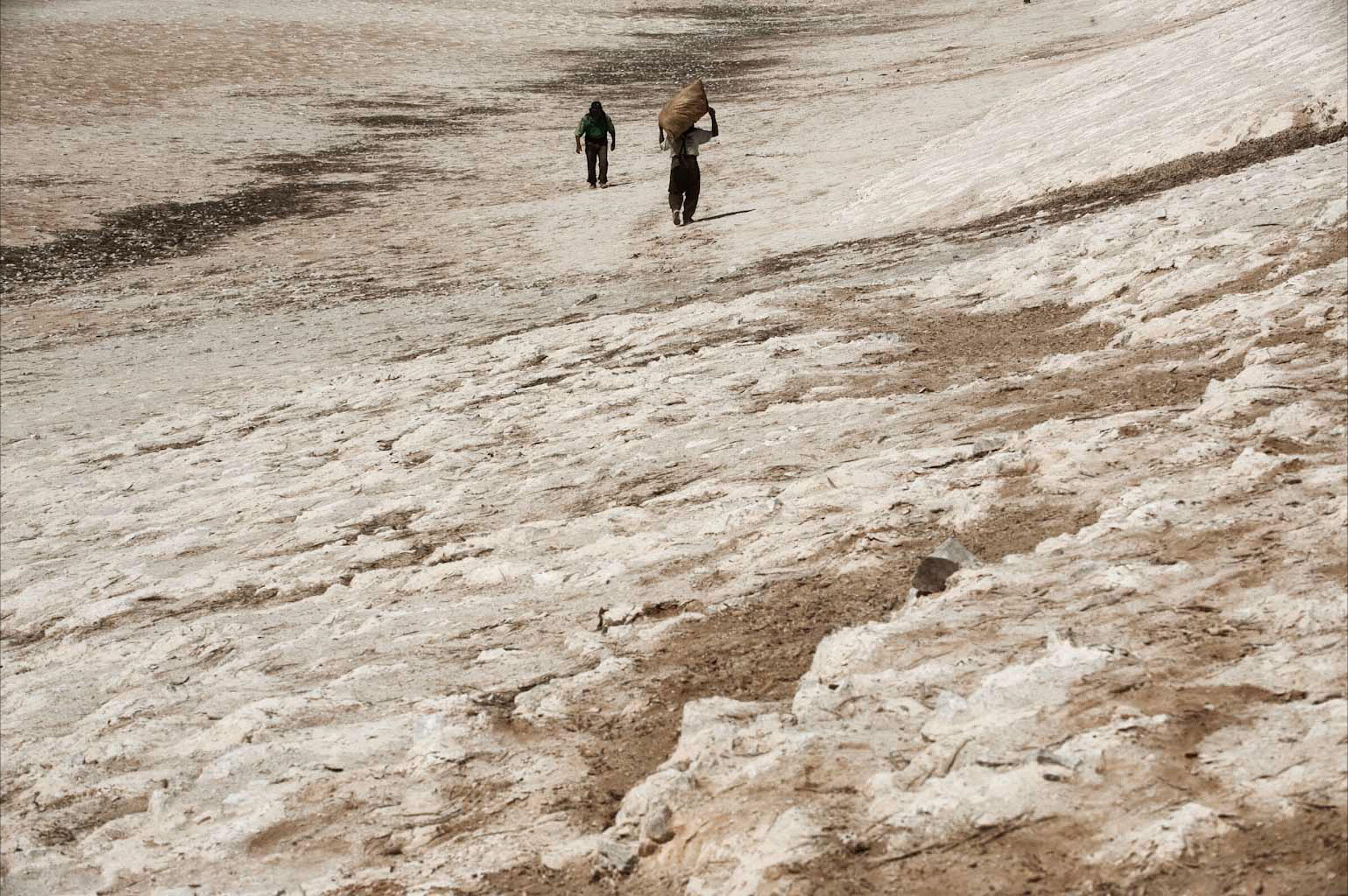 Laborers carry sacks of guano across Chincha Island. The rich resource isn’t the only thing that draws people to these uninhabited islands—poachers have long visited the avian oases to kill birds for their meat and steal their eggs. Recently, the Peruvian government hired a full-time employee to guard the islands against these attacks, says Benavides. 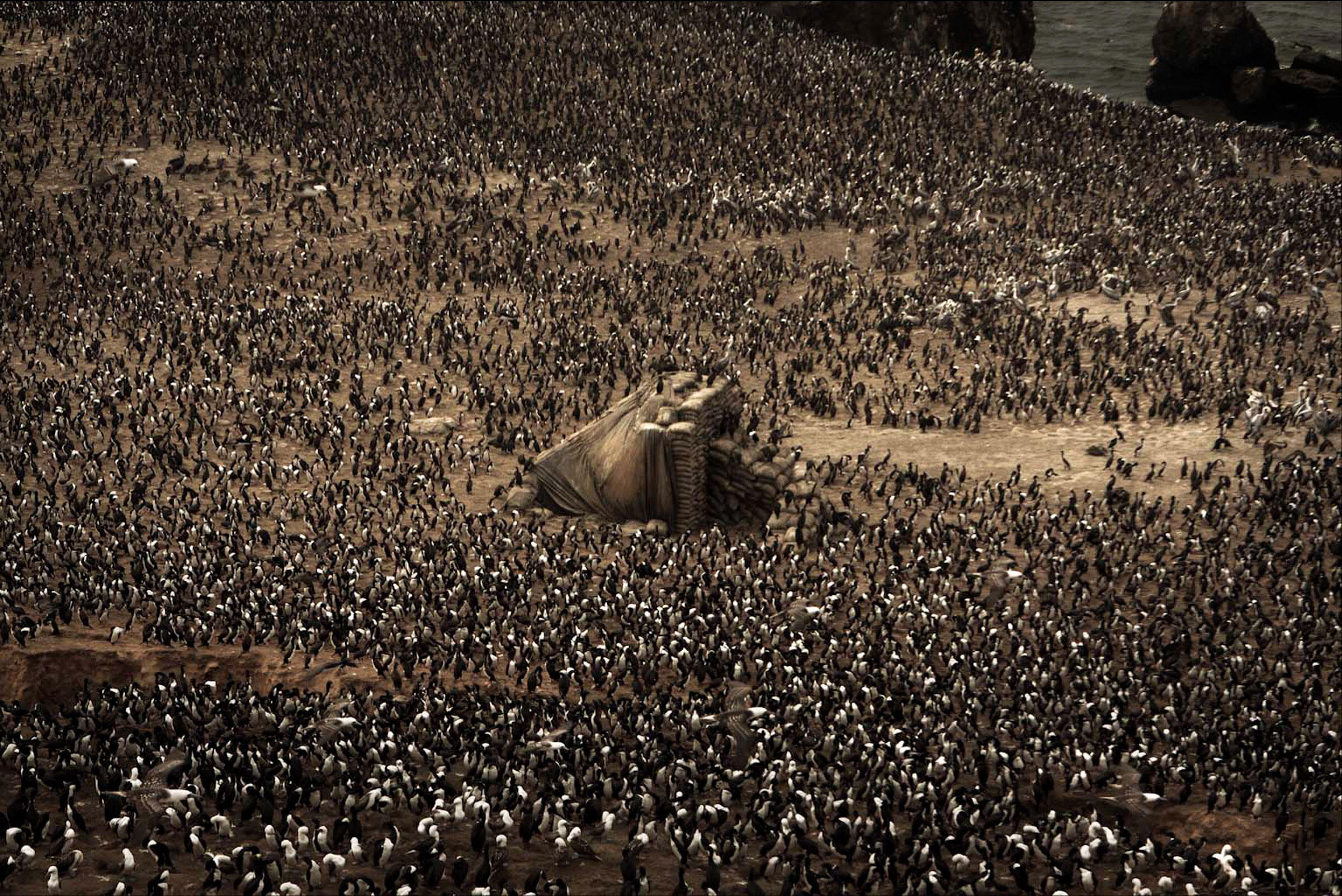 Guanay Cormorants, Peruvian Pelicans, and Peruvian Boobies overwhelm the harvest operation—both in terms of their massive numbers and the pervasive odor from their guano. The birds’ main food source, Peruvian anchovies, have declined since the advent of the commercial anchovy fishing industry in the 1950s. Climate change brings new risks and uncertainties, such as how increasing sea-surface temperatures will affect the cold-dwelling fish.