[Updated: See editor's note below.] The hit TV show “Atlanta” offers a reminder that one Black person's paradise can be another one's terror. 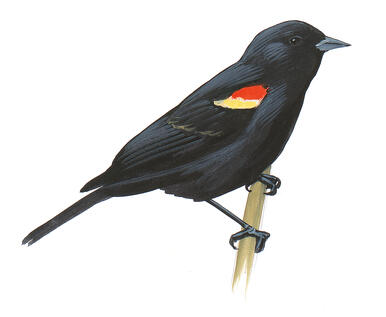 Editor's note: After learning about serious allegations against Jason Ward, National Audubon Society has severed its ties with him. A screenshot of this Audubon magazine article appears in Aisha White’s blog post that details the allegations, underscoring the importance of the topic raised in this piece—safety in the outdoors for everyone. In the interest of transparency and journalistic integrity, this article will remain posted. We believe that it is important to keep a record of the magazine’s past connection to the author and Ward’s role in the broader birding community, both of which are relevant to the current public discourse.

One of my favorite aspects of birding is the ability to disconnect with civilization. I love roaming in places where the only ambient noise I hear are the leaves crunching beneath my boots, birds defending their territory through song, and insects rattling off their harsh mating calls. Never do I feel more in tune with my surroundings than when I’m surrounded by nature.

This was the case during a recent episode of one of my favorite shows, FX’s Atlanta, a dramedy that touches on serious social issues, only to turn around and make you fall down laughing. It gives audiences a glimpse of what life is like for young black adults in today’s climate. Episode eight of the recently wrapped second season, Woods, is the perfect example.

Allow me to briefly set the scene. Midway through the episode, one of the show’s main characters, Alfred Miles, better known as the rapper Paper Boi, gets mugged on a Georgia highway. The altercation results in him fleeing into the woods. After he escapes his pursuers, he finds himself lost and overwhelmed by his wild surroundings. The rest of the episode is spent in this setting, with the woods playing a few metaphorical roles.

First, they represent the state of mental complacency that Paper Boi has found himself in as of late; if he can only find the willpower to escape the sea of trees, he’ll finally be able to break through his inner turmoil and take charge of what comes next. But there’s also a more overt sense of danger in the darkness and savagery. As Paper Boi runs for his life, the trees erupt in a cacophony of bird sounds: Common Loon, Carolina Chickadee, Blue Jay, Chuck-will’s-widow, Eastern Whip-poor-will, Eastern Screech-Owl, and Great Horned Owl. Through it all, I find myself on the edge of my seat, smiling as I identify these birds. I’m two seconds away from grabbing my binoculars when I notice that the main character doesn’t seem to be enjoying his experience. He even jumps as the sound of a bird taking flight near him. At that point, I realize we’re on two very different wavelengths when it comes to the woods.

There are tons of reasons why our perceptions might differ: Naming one would only feed the stereotypes that make black nature lovers so easy to dismiss. Saying that we aren't culturally attuned and interested is plain wrong. It's also counterproductive to solving the larger issue.

Ultimately, a fraught relationship with nature may boil down to the fact that people fear what they don’t understand. There are reasons for that as well. America has a love affair with the great outdoors; we celebrate its majesty and encourage others to go out and experience it. And yet, the targets of this encouragement seem to be calculated. Whether it’s on ads for outdoor gear and apparel or in mainstream media, you typically don’t see depictions of black people enjoying the outdoors.

What’s more, as African Americans, we’re careful to avoid putting ourselves in precarious situations, including in geographies where we feel out of place. In 2009, the National Park Service estimated that only seven percent of the visitors to their parks were black. I’ve been leading bird walks for four years now, and I can count the number of black attendees on two hands.

There’s no easy fix here, but there has been some change. That primarily is thanks to leaders in the African American community, who are trying to ensure that the nature experience is a good experience. Outdoor Afro, for example, has chapters in 28 states, and is using them to shift the way people perceive the woods. I was fortunate enough to go birding with the Atlanta chapter in February. We visited a large wetland area south of the city, where we were treated to the sights and sounds of hundreds of thousands of Red-winged Blackbirds coming home to their roosting spots for the night. As the flocks settled, we watched the sunset and talked about the how culture ties into the outdoors. I even taught the children how to “pish” birds out of hiding (responsibly, of course).

In a 2011 article for Outdoor Afro, my friend and mentor J. Drew Lanham talks about birding while black. “I’ve always been the odd one out,” he writes. “A ‘rare’ bird in the flock.” When that situation is reversed, though, it makes all the difference in the world. Words can’t describe how much joy it brings me to know that within my community, I’m not alone in my love for birds and nature.

No matter what’s going on in life, the woods will always be my safe haven. Unlike Paper Boi, I get lost in them on purpose. Now it’s my mission to ensure that others who look like me can do the same.

Do Communities of Color Really Feel Disconnected From Nature?

He can’t fly, but he can teach—a talent that will serve him well in his fancy new role.