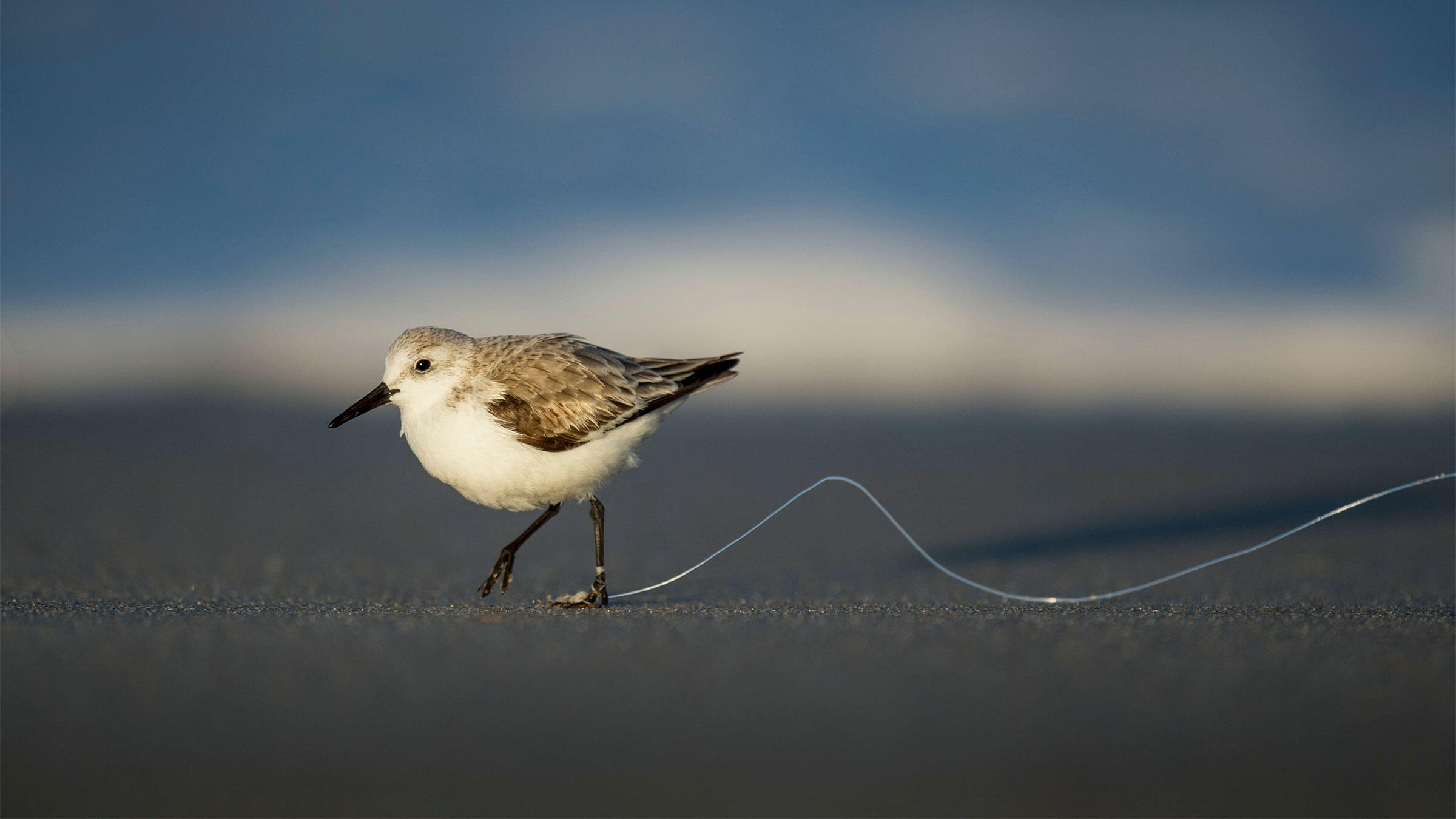 Sanderling tangled in fishing line. Birds that get snared too tightly or for too long often end up losing a limb from lack of blood flow. Photo: Raymond Hennessy/Alamy

Around Thanksgiving of last year, an American White Pelican stumbled up to a driveway in Newport Beach, California, looking worse for the wear. Anemic, starving, and exhausted, the bird had apparently hooked its foot on a fishing lure and broken its lower bill trying to free itself.

Sadly, this pelican was not the first bird to have a deadly run-in with castoff fishing gear, which makes up a sizable percentage of all ocean pollution. Scientists don’t know exactly how many animals get snared by hooks, nets, and plastic line. But at just two wildlife clinics in California, run by International Bird Rescue (IBR), rehabilitators treated at least 2,957 aquatic birds for fishing-gear-related injuries from 2002 to 2015. Most were pelicans and gulls, though the patient list also included loons, grebes, cormorants, ducks, sandpipers, auks, herons, egrets, shearwaters, and terns. Not all of the wounds are necessarily fatal: In the case of the Thanksgiving pelican, IBR staff amputated a toe and surgically attached a fixator to its bill. After two months of recovery, it was set free in a wetland.

But the majority of incidents are avoidable, especially those that stem from careless litter such as lost fishing line. “My workload is massively related to fishing-line injuries,” says Rebecca Duerr, an IBR veterinarian. “It’s probably about half of what I do.”

Ubiquitous in waterways, from the Pacific Ocean to manmade urban ponds, lost or abandoned line injures hundreds of species. In Florida, for instance, biologists reported that line kills more pelicans than any other hazard. Meanwhile, in Maryland’s Chesapeake Bay, an estimated 5 to 10 percent of Osprey nests are lined with the material. Derelict line, which takes hundreds of years to biodegrade, likewise menaces marine mammals and sea turtles.

Even non-aquatic animals are affected. Cindy Margulis, executive director of the Golden Gate Audubon Society in California, recalls seeing a Barn Swallow that was strangled to death on fishing line just inches from its nest. This April, a Great Horned Owl died after being snared by fishing line in Brooklyn, New York. “If you’ve ever seen a bird have its circulation cut off by monofilament [the most popular type of plastic fishing line] or lost a wing to monofilament, it’s really ghastly stuff,” Margulis says.

The irony is, littered line hurts marine recreation, too. It wreaks havoc on boaters’ propellers and along with birds and fish, can endanger scuba divers. A diver in South Carolina died a year ago after fishing line got caught in her breathing gear.

To tackle the deadly problem, fishing organizations, government agencies, and outdoor and nature groups are working together to deter pollution. Thanks in part to the nonprofit BoatUS Foundation, monofilament recycling bins—made of PVC pipes that look a bit like submarine periscopes—have popped up in recent years at thousands of popular fishing locations across the United States, including problem spots such as Redondo Beach Pier and the Santa Cruz Municipal Wharf in California. Florida alone has about 1,600 of these bins, which are generally accompanied by signs educating the public about proper disposal.

Cindy Margulis was inspired to get involved in the Berkley recycling program in 2015, after one of the few Ospreys to winter in the Bay Area was entangled twice in a short month-long span.

At landfills, line can still pose a threat to wildlife. So, the various marinas, parks departments, nonprofits, and community groups that maintain the bins mail it to Iowa, where the company Berkley Fishing melts it down and turns it into artificial fish habitats, among other products. (Representatives for Berkley’s parent company declined to comment for this story.)

Margulis was inspired to get involved in the Berkley program in 2015, after one of the few Ospreys to winter in the Bay Area was entangled twice in a short month-long span. It managed to survive with the help of local residents who pulled it from the water. Golden Gate Audubon has since tripled the number of line recycling sites in San Francisco County and doubled the number in nearby Alameda County.

The installation of these bins can only have positive impacts on local wildlife. “I’m always surprised by the relative lack of receptacles for trash and recycling in lots of public places,” says Kirsten Gilardi, co-director of the Karen C. Drayer Wildlife Health Center at the UC Davis School of Veterinary Medicine. “Providing better options for fishers to do the right thing with disposal is definitely a step in the right direction.”

Recycling alone, however, does not stop entanglements; sweeping the water for existing pollution is another crucial step. The California Lost Fishing Gear Recovery Project, led by Gilardi, employs divers to clean up trash-filled fishing sites. Since 2006, they've removed more than 1 million feet of monofilament line from 15 piers in the Golden State, along with hundreds of pounds of other rubbish.

At the same time, educating the fishing community to alter its practices can be even more efficient. The federal government’s NOAA marine debris program advises anglers not to cast in areas where lines might get snagged. Seabird roost sites and nesting areas are especially sensitive and should be off limits to fishing, says Deborah Jaques, a wildlife biologist and founder of the conservation group Pelican Science. She also recommends that “if birds come after your bait and hook, to reel it in quick.” Her other ideas are more avant-garde. In popular fishing areas, for instance, she thinks educational signs should include the contact information of nearby wildlife rehabilitators, and that crates should be kept on site to stow injured birds until help arrives. “You don’t want to upset the fishing community,” Jaques says, “but minor adjustments could be helpful.”

There’s also a role for political advocacy. The United States has yet to join the Agreement on the Conservation of Albatrosses and Petrels, an international treaty that would help countries adopt safer standards for long-line fishing. And on a more civic level, advocates can back policies that push for designated fishing areas and the retrieval of gear.

Of course, good Samaritans are always a last resort. “All sorts of spectacular rescues happen,” Duerr says. She’s heard of surfers saving seabirds on the verge of drowning and firefighters liberating herons that were dangling upside down from trees. But, she adds, “you wish it wouldn’t happen in the first place.”

By doing so, you'll be helping birds and other wildlife.