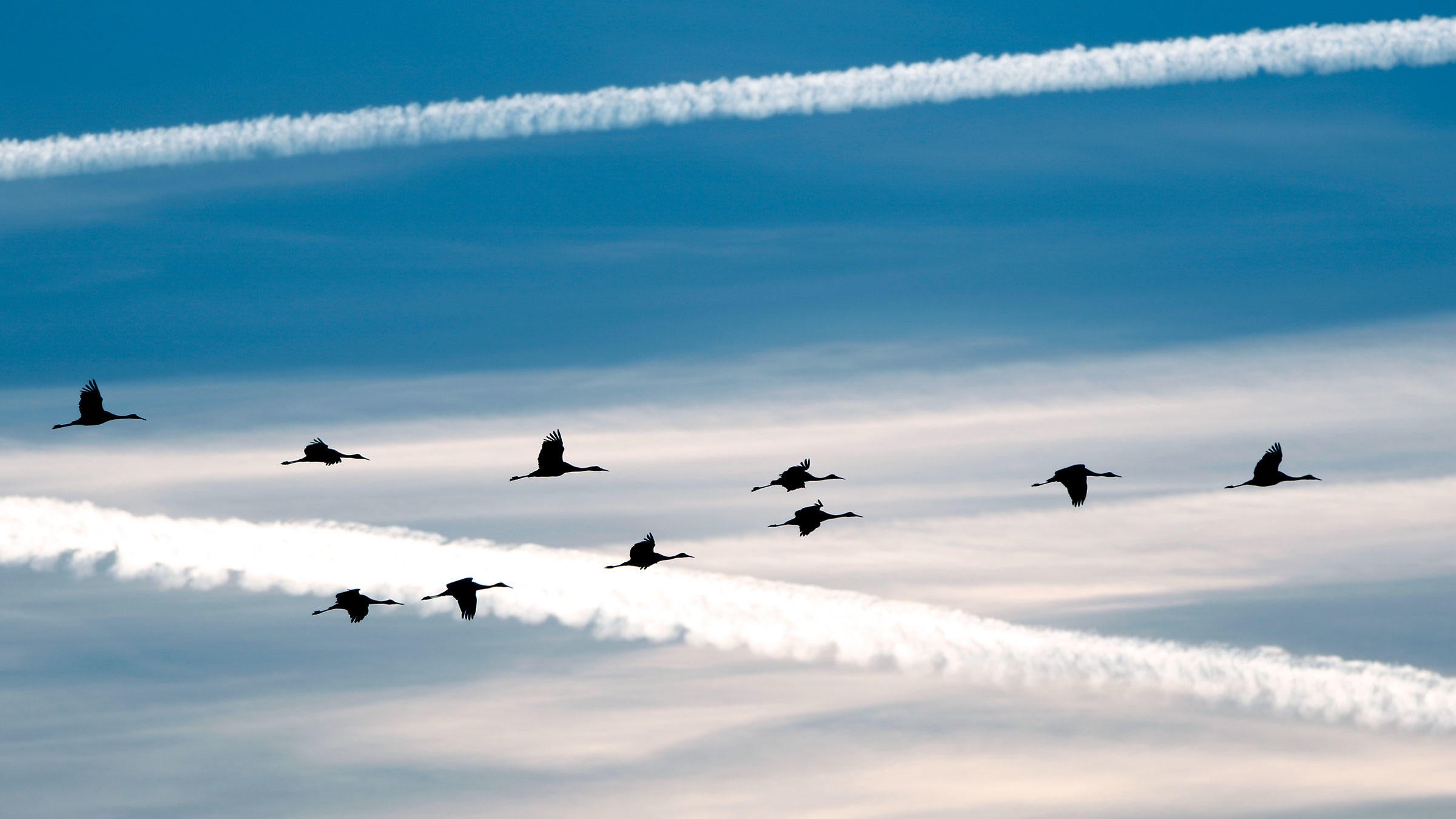 The climate pledge will cut carbon pollution and protect migratory birds and other wildlife, such as Sandhill Cranes. Photo: Mark Wright/Audubon Photography Awards

What Does the North American Climate Pledge Mean?

This story was originally posted on InsideClimate News.

It is an easy climate goal to articulate: By the year 2025, the three nations of North America will generate half their combined electricity in ways that don't add to global warming.

The new goal, put forth at a tripartite summit meeting this week by the leaders of Canada, the United States, and Mexico, might well mark a turning point away from the continent's outmoded obsession with fossil-fuel independence, and toward a shared investment in a clean energy revolution.

But in its particulars, "50 percent by 2025" raises almost as many questions as it answers.

What kinds of energy are both clean enough to count and ready enough to build so quickly?

Does the plan encourage achievement from each sovereign state, or grade the group as a whole on an easy curve?

Conversely, does it do enough to tie the three nations together into an efficient, holistic energy revolution?

The answers remain elusive, because each nation has many paths available, and because many barriers remain along several of those roads.

Before deciding if this goal is ambitious enough to matter, examine carefully the definition that is being offered of clean electricity.

Like a vegetarian who will eat anything without a face, the leaders—U.S. President Barack Obama, Canadian Prime Minister Justin Trudeau, and Mexican President Enrique Peña Nieto—are willing to nibble at anything that makes electricity without leaving a carbon footprint.

Clean electricity, their aides explained, includes wind, solar, and hydropower; nuclear energy; and even fossil fuels like coal and natural gas, as long as those are burned in plants that capture the CO2 emissions and trap them underground.

Finally, they gave a nod to energy efficiency, which doesn't produce electricity but, by lowering demand, would make it easier to meet the 50 percent goal.

Among clean-energy advocates, views vary widely on the relative merits of the technologies the leaders embraced.

Some would like more emphasis on nuclear, others less on hydro. Purists hope that wind and solar might carry most of the load, but that requires keeping their fingers crossed for better batteries and a smarter grid.

Whether or not the 50 percent goal determines winners and losers, does it at least lay down a fast track for a 10-year dash among these competing technologies?

At the moment, it's fair to say that wind and solar already have a head start. Natural gas, which like coal can only run in this race if it's handicapped with costly CCS technology, may be left at the gate. Hydrogen and nuclear will mostly plod along at their current pace.

Depending on who's counting, these three nations already produce about a third of their electric power from clean sources. And with policies and markets pointing in today's direction, they are within a hair of achieving 50 percent quickly.

Rachel Cleetus, lead economist at the Union of Concerned Scientists, said in a blog post that the 50 percent goal is "not a big stretch."

For example, renewable energy (including hydro) accounted for 13 percent of electricity in the U.S. last year, and with nuclear thrown in, all carbon-free sources provided about 33 percent. Cleetus' group has estimated the total might reach 46 percent by 2025 if the Obama administration's Clean Power Plan survives, buttressing the extension by Congress of tax credits for wind and solar a few months ago.

"With current policies in place, the three countries are projected to get 45 to 49 percent clean energy by 2025," she wrote.

One promise, made almost in passing by two top White House economic and climate aides in a blog post, was fairly audacious: "greening ... government operations to 100 percent clean energy by 2025."

Canada, which gets most of its electricity from hydropower and another big chunk from nuclear, already makes 80 percent of its power from carbon-free sources. Ontario is coal-free, and Saskatchewan even has a pilot coal plant using CCS.

Mexico's electricity use is expanding fast, and it is heavily dependent on natural gas, but it has made ambitious mid-century pledges for reducing carbon dioxide emissions. It currently gets 25 percent of its electricity from clean power, and last year passed a law setting a 2024 goal of 35 percent.

One major element of the new tripartite program is to build border-crossing power lines able to carry 5,000 gigawatts, to make it easier to ship green electricity back and forth.

As the biggest economy by far, the United States' effort to bring the continent's average up to 50 percent will be tested most rigorously.

Here, the main question—unless Donald Trump becomes president, in which case all bets are off—is whether the Clean Power Plan, clamping down on carbon dioxide emissions from existing power plants, survives a court test in the coming year. If it does, utility companies would have an unambiguous signal to take the power grid green.

But that regulation is to be phased in slowly beginning in 2022, and after so much delay, it might only modestly affect achievement of the 2025 target envisioned by the three leaders.

Much more significant, since it's already locked in, is the recent extension by Congress of tax incentives for wind and solar power that were about to expire. They will be slowly phased out, but should still be a powerful boost to investments in green energy over the next five years.

Whatever their respective individual contributions, the three nations' vow to work in concert is what most excites advocates of strong climate action.

This agreement also could lead to a much more important knitting together of the three energy economies—perhaps even, one day, to a common price on carbon.

This was a key recommendation of a paper written for the summit meeting by experts from a group of energy and climate think tanks. While far from a European-style common market for carbon trading or a unified carbon tax, they recommended expanded "efforts to align pricing instruments where feasible."

"Such a transcontinental system would symbolize movement toward a more harmonized North American approach to carbon pricing and would provide momentum to the burgeoning effort to price carbon globally," they wrote.

InsideClimate News is a Pulitzer prize-winning, nonprofit, non-partisan news organization that covers clean energy, carbon energy, nuclear energy and environmental science—plus the territory in between where law, policy and public opinion are shaped. Its mission is to produce clear, objective stories that give the public and decision-makers the information they need to navigate the heat and emotion of climate and energy debates.