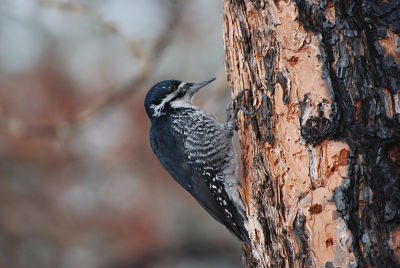 Fire season is in full swing, and some of the mega-blazes have proven nearly unstoppable. Audubon reporter Nick Neely looks at what happens after the flames die down and wildlife returns to burnt areas.

In 1969 the Ad Council produced a Smokey the Bear campaign announcement that begins, “In the time it takes to grow a tree, you can grow a country.” As the camera slowly pans up a tall ponderosa pine, famous American songs and speeches play, from a Revolutionary War fife to the radio broadcast of Pearl Harbor. At the tree’s crown, you listen to the launch of a lunar mission: “3, 2, 1, zero, ignition.” Then, suddenly, you plunge to the forest floor—with a match—where dry needles sprout into a flame. “It only takes a minute to wipe out a century,” says the narrator. “A flash, and nothing—and even the birds won’t come anymore.”

“We’ve come a long way since that public service announcement,” says Vicki Saab, a wildlife biologist at the Rocky Mountain Research Station in Bozeman, Montana. After decades of full-bore fire suppression, scientists and forest managers have begun to recognize that big blazes are ecologically indispensable—and that, after the flames die down, birds arrive in droves. In fact, some avian species depend on freshly burned forests, while others soon follow as food sources and nesting habitat become available in the newly enriched environment. Some species actually rely on the early arrivals, like black-backed woodpeckers, to pave the way. Nowhere is that more evident than in the dry, lightning-riddled coniferous forests of the Rocky Mountains, where vast tracks of forest burn every year.

Of course, “there are winners and losers after fire,” says Saab. If treetops burn completely in a “crown fire,” canopy dwellers like the mountain chickadee must seek out new habitat. But woodpeckers win big. In pursuit of bark and wood-boring beetles, they rapidly move into large areas of scorched trees.

Black-backed woodpeckers are perhaps the most iconic of post-fire species, since they’re wholly reliant on burn zones. They forage at smaller, charred trees, but when it comes to finding a home, they single out trees with previously decayed heartwood—nicknamed “spike tops”—where they excavate their nests the year after a fire. Just how they locate freshly charred forests is a bit of a mystery. Beetles are attracted to smoke and emit pheromones, and the woodpeckers might follow their chemical trail. Or perhaps they simply chase the flames, says Dick Hutto, a University of Montana professor who has studied the birds for nearly 20 years. “It’s not that hard for us to pinpoint a fire,” he says, “and they can fly.”

Black-backed woodpeckers move on after three or four years, tied to the boom-and-bust cycle of beetles. But other woodpeckers stick around for more than a decade, such as Lewis’s woodpeckers, whose population steadily grows with an abundant supply of aerial insects that feed on new vegetation. White-headed woodpeckers, meanwhile, take up residence on the fringes of blackened stands because they rely on seeds from living pines in fall and winter. “If we manage for the range of conditions that these three species represent,” says Saab, “it would likely provide habitat for all birds.” Prescribed fire—and careful salvage logging, if any—is the best way to accomplish this goal.

After a fire, plants recolonize and flourish, thanks to the surge of nutrients a blaze releases back into the earth. So in addition to insectivores like the Lewis’s woodpecker, fruit- and seed-eating birds thrive, too. In the West, species typically found in dense canopy become plentiful in more open, recently burned tree stands. These include Lazuli buntings, says Saab, and even MacGillivray’s warblers, which typically stick to wooded areas along streams and rivers. Both build nests low to the ground in tangles of shrubbery that flourish in the direct sunlight of a recently burned forest. And if living trees are found near large fire areas, flame-hued western tanagers can be found nesting as well.

Not surprisingly, secondary cavity nesters— birds that take over old nest cavities—also prosper after woodpeckers vacate nests in search of more recently burned areas. “Woodpeckers are pathfinders,” says Hutto. “They create the conditions that are going to be improved for birds four, five, six, seven years later—for house wrens, bluebirds, tree swallows, flickers, and kestrels.” Perhaps the most famous secondary cavity nesters are western and mountain bluebirds, which feed on insects. “As long as they have a nest cavity, they’re perfectly happy with no tree canopy at all,” says Renée Duckworth, a University of Arizona professor who studies bluebirds near Missoula, Montana. Mountain bluebirds will colonize in abundance right away, she says, and then westerns move in aggressively after a few years. In part because of fire suppression, western bluebirds were pushed out of Montana by the 1960s, but they’ve returned thanks to popular nest box campaigns, which resemble the cavities woodpeckers would carve out in a natural burn zone.

For years and decades after a fire, the avian community grows and evolves. When is the latest you should visit a burn zone with your binoculars? “If you like spotted owls, perhaps you ought go in 600 years after,” says Hutto.

Even as fires get bigger—some so-called “megafires” have burned more than a million acres—most are of mixed intensity and generate a variety of habitat, says Saab. “Driving by, it might look like stand replacement, like everything’s devastated,” she says. “But if you look at an aerial or satellite view, almost all fires are a mosaic.” Sporadic islands of untouched forest, swaths of milder understory burn—the more complex, the better.

“Smokey needs to change the message,” says Hutto, “and it has to be more complicated.” He continues, in a bearish voice: “Hey kids, there’s two kinds of fires: One’s destructive, but the other’s out miles away from your house, and it’s fantastic.” And once the flames have died down, the birds will come, as they have for countless centuries.

This story orginially ran on audubonmagazine.org.