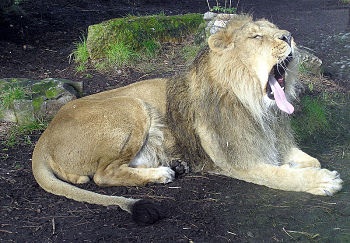 At the Olympics, speedskater Apolo Ohno received a lot of attention for yawning before his races. When asked about it, Ohno said that he wasn’t tired, it just helps him prepare for the competition. While yawning is often associated with sleepiness, it has many functions. "A yawn often signals a change from one condition to another. You can facilitate the change from a more alert state to a more sedate one or vice versa," says Richard Provine, a psychologist at the University of Maryland. "Paratroopers yawn before jumping."

Nearly every animal with a backbone yawns: fish, dogs, cats, snakes, birds. But most scientific research has looked at the behavior in humans.

In 1987 Provine proved that, contrary to popular belief, lack of oxygen doesn’t cause yawning. He had volunteers breath air with higher than normal levels of CO2 or 100% O2 and found that neither elevated carbon dioxide or lower oxygen levels in the blood caused the frequency of yawning to change. In a second study, he showed that exercising enough to double volunteer’s breathing rate didn’t have an effect on yawning either. So, yawning isn’t a primary respiratory function.

A few quick facts: We yawn in the morning and the evening, but more in the evening.  Yawning is contagious (merely talking or reading about it is enough to set most people off), and may be related to our capacity for empathy. Additionally, it may be an ancient signal, a way to synchronize a group for an activity, such as going to sleep. Some primates also seem to “catch” yawns, and chimps display the behavior before changing activities.

Then there are the interesting medical links. In some cases, when a person is paralyzed on one half of their body, scientists have reported that yawning triggers the involuntary raising of the paralyzed arm. And scientists recently found that yawning temporarily relieves symptoms in people with multiple sclerosis.

There’s also a growing body of evidence that yawning is a thermoregulatory mechanism, cooling the body when the normal processes aren’t functioning properly. “Conditions such as multiple sclerosis, migraine headaches, epilepsy, stress and anxiety, and schizophrenia have all be linked to thermoregulatory dysfunction and are often associated with instances of atypical yawning,” Binghamton University researchers report.

Birds do yawn, or at least seem to, but it is not all that common and not clearly related to the same reasons that mammals yawn. To recognize a true bird yawn, the circumstance has to be when they are by themselves with nothing threatening. This is because the "yawn" behavior is very similar to a "gape" or threat, which many birds do. The gape involves directing the opened beak, usually at another of the same species- but sometimes at other species. It basically means "back of." We see this often with puffins, who both yawn and gape. Many birds also do gapes at bird feeders to threaten others off. Often gaping birds direct their attention by leaning forward in a threatening way with the beak open as if they are about to attack.