This species extends its range from the mouth of the Columbia river, across our continent, to the shores of the Gulf of Mexico; but how far north it may proceed is as yet unknown. On the 10th of April, 1837, whilst on Cayo Island, in the Gulf of Mexico, I found a specimen of this bird dead at the door of a deserted house, which had recently been occupied by some salt-makers. From its freshness I supposed that it had sought refuse in the house on the preceding evening, which had been very cold for the season. Birds of several other species we also found dead on the beaches. The individual thus met with was emaciated, probably in consequence of a long journey and scanty fare; but I was not the less pleased with it, as it afforded me the means of taking measurements of a species not previously described in full. In my possession are some remarkably fine skins, from Mr. TOWNSEND'S collection, which differ considerably from the figure given by BONAPARTE, who first described the species. So nearly allied is it to the Green-crested Flycatcher, M. crinita, that after finding the dead bird, my son and I, seeing many individuals of that species on the trees about the house mentioned, shot several of them, supposing them to be the same. We are indebted to the lamented THOMAS SAY for the introduction of the Arkansaw Flycatcher into our Fauna. Mr. NUTTALL has supplied me with an account of its manners.

"We first met with this bold and querulous species, early in July, in the scanty woods which border the north-west branch of the Platte, within the range of the Rocky Mountains; and from thence we saw them to the forests of the Columbia and the Wahlamet, as well as in all parts of Upper California, to latitude 32 degrees. They are remarkably noisy and quarrelsome with each other, and in the time of incubation, like the King-bird, suffer nothing of the bird kind to approach them without exhibiting their predilection for battle and dispute. About the middle of June, in the dark swamped forests of the Wahlamet, we every day heard the discordant clicking warble of this bird, somewhat like tsh'k, tsh'k, tshivait, sounding almost like the creaking of a rusty door-hinge, somewhat in the manner of the King-bird, with a blending of the notes of the Blackbird or Common Grakle. Although I saw these birds residing in the woods of the Columbia, and near the St. Diego in Upper California, I have not been able to find the nest, which is probably made in low thickets, where it would be consequently easily overlooked. In the Rocky Mountains they do not probably breed before midsummer, as they are still together in noisy quarrelsome bands until the middle of June."

Mr. TOWNSEND'S notice respecting it is as follows: "This is the Chlowish-pil of the Chinooks. It is numerous along the banks of the Platte, particularly in the vicinity of trees and bushes. It is found also, though not so abundantly, across the whole range of the Rocky Mountains; and along the banks of the Columbia to the ocean, it is a very common species. Its voice is much more musical than is usual with birds of its genus, and its motions are remarkably quick and graceful. Its flight is often long sustained, and like the Common King-bird, with which it associates, it is frequently seen to rest in the air, maintaining its position for a considerable time. The males are wonderfully belligerent, fighting almost constantly, and with great fury, and their loud notes of manner and defiance remind one strongly of the discordant grating and creaking of a rusty door-hinge. The Indians of the Columbia accuse them of a propensity to destroy the young and eat the eggs of other birds.

The outer five primaries much attenuated toward the end, the first more so, the fifth least, the third longest, but the outer four nearly equal; tail almost even. Upper parts ash-grey, the back tinged with yellow; a patch of bright vermilion on the top of the head; wing-coverts and quills chocolate-brown; upper tail-coverts and tail black, the outer web of the lateral feathers yellowish-white; throat greyish-white, sides and fore part of neck ash-grey, the rest of the lower parts pure yellow. Female similar. 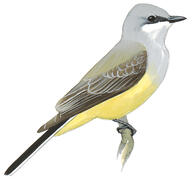