This species does not breed in the United States, or if it does, must spend the summer in some of the most remote north-western districts, so that I have not been able to discover its principal abode. It merely passes through the better known portions of the Union, where it remains for a very short time. There is something so very uncommon in its appearance in different States, that I cannot refrain from briefly mentioning it. It is sometimes found in Pennsylvania, or the State of New York, as well as in New Jersey, as early as the beginning of April, but is only seen there for a few days. I have shot some individuals at such times, when I observed them employed in searching for insects and larvae along the fences bordering our fields. At other times I have shot them late in June, in the State of Louisiana, when the cotton-plant was covered with blossoms, amongst which they were busily searching for food. The Bay-breasted Warbler, however, has so far eluded my inquiries, that I am unable to give any further account of its habits.

Outer three quills almost equal, fourth considerably shorter; tail slightly emarginate. Male with the upper part of the head, the fore-neck, and the sides, chestnut-read; forehead and cheeks, including a small space over the eye, deep black, behind which is a transverse patch of yellowish-white on the sides of the neck; back bluish ash-grey, streaked with black; tips of the secondary coverts and first row of small coverts white; quills and tail-feathers brownish-black, edged with grey, the outer three of the latter with a white patch on the inner web, near the end; middle of breast, abdomen, and lower tail-coverts white, tinged with reddish. Female similar to the male, but with the tints fainter, especially the chestnut of the head and throat, which are converted into light brownish-red.

From Texas northward. Rather common. Migratory.

This species, commonly known in America, is distinguished by its five-lobed leaves and herbaceous stem. 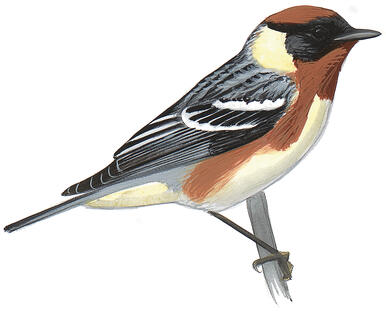